This morning Rachel ran into our room at around 7:30 AM to ask if it was "real Halloween." We saved the pumpkin to carve today... accidentally... and she's been looking forward to it since Friday. We fully intended to do it yesterday, but with the half-marathon and Kayl's birthday party and trick-or-treating and everything we simply ran out of time. We didn't do it earlier because we hadn't bought a pumpkin yet. Andrew and I went on a date on Friday night and on our way home we stopped to buy a pumpkin at Winco--there were probably only twenty pumpkins to choose from and they were all so, so sad-looking. But at least we found pumpkins and it only cost us a dollar. Last year's pumpkin cost around $10, which really isn't bad considering our friends in the UAE could have spent $30 on a pumpkin had they chosen to (they didn't).
I told Rachel we'd be doing the pumpkin after church, after dinner. As it was we barely ended up squeezing in the carving before bedtime. But we did it. And before November, too.
Andrew drew the face on the pumpkin with permanent marker. Rachel was begging to help the whole time but Andrew kept telling her no.
"This is a dangerous marker," he told her, "If you draw on something it won't come off because the ink is permanent. You can help with the carving."
"Ummmm, honey," I said from across the kitchen where I was doing dishes like a good, little wife (Andrew made dinner so it was only fair), "I would really rather she use the marker than the knife. Just sayin'. I mean, permanent marker might not come off very easily but fingers don't go back on any easier." 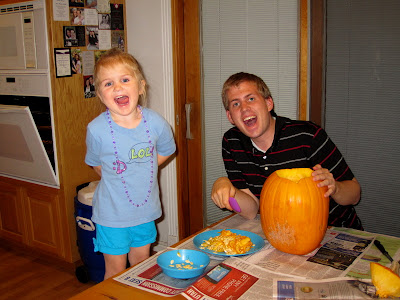 He gave her the job of scooping out the "guts" but she only lasted through one rotation. She doesn't like the guts. So Andrew did that and I sorted through to find all the seeds. Rachel got to poke the eyes, nose, and mouth pieces out after Daddy finished cutting them. We talked about what happened to the pumpkin when she poked its eyes out and automatically defaulted to masculine pronouns. It is, after all, a jack-o-lantern.
"I poked his eye out!" Rachel squealed, "So now he can't see!"
"Well, now he can see because by taking that part out we gave him eyes, see? Where before there was just pumpkin there's an eye!"
"Oh, yeah!" she said and then got really serious, "But this pumpkin is a girl pumpkin. You just said 'he.'"
"So did you."
"Oh. Well...I didn't know it was a girl then. But it's a girl."
"What's her name?"
"Sally."
This is a name that Rachel feels is really "American." She keeps trying to change Baby Nora's name to Sally but we are strongly discouraging this. "Baby Nora lives in America now so she needs an America name like Sally," she explains. We then explain to her that names are special things that represent, in a way, who we are--we didn't change her name to Fatima when we moved to Egypt so she shouldn't change Baby Nora's name to Sally now that we live in America. It just wouldn't be right.
But if you really want to name your pumpkin Sally, go for it.
Meet our sally-lantern, Sally. 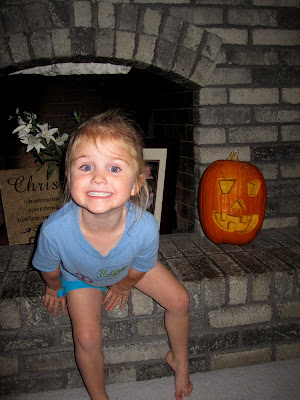 Miriam was really interested in Sally, especially the candle inside. 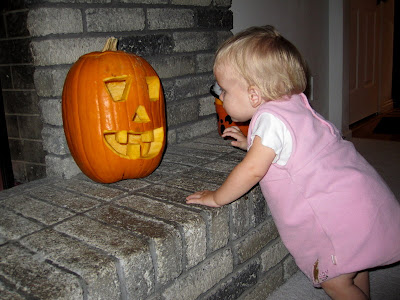 She went straight for it! Luckily we used an electronic candle--we didn't want to use a real one because our little demented pumpkin can't even stand up on its own--so no children were harmed and the house is still standing. 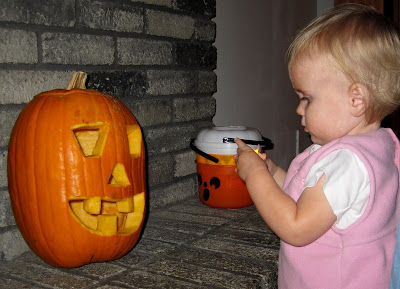 It's hard to believe our little baby is snatching candles from the mouths of sally-lanterns this year when last year she was too small to even be interested in pumpkins.
*sigh*
They do grow up, don't they. 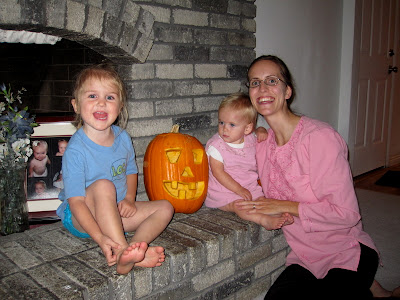 We spent about a half hour dancing around and singing songs from The Wizard of Oz (which totally counts as Halloween songs, at least...to Rachel) and doing some "tricks."
Also, Miriam does this emphatic-yes/headbang thing, which has nothing to do with Halloween, but it's hilarious. I guess it's the only way to dance when you're on all fours...but she does do it for "yes" sometimes. This evening she was doing it because we were singing Follow the Yellow Brick Road...
...which reminds me!
Someone handed out a sucker when we were trick-or-treating yesterday and Rachel immediately pulled it out of her bucket.
"Open this!" she demanded.
I reminded her about manners and etiquette and respect.
"Open this, please!" she demanded.
So I opened the sucker for her. She licked it once and then took off skipping down the sidewalk singing at the top of her lungs, "We represent the Lollipop Guild! The Lollipop Guild! The Lollipop Guild! And in the name of the Lollipop Guild we wish to welcome you to Munchkin Land!"
Then she asked me to finish it for her.
She is some kid!
Posted by Nancy at 1:44 AM