I think it took me five minutes for me to hobble from my bed to get Miriam from her crib this morning. Daddy-dear was long-since up with Rachel and the two of them were playing downstairs when she started to fuss, otherwise I'm sure he would have gotten her for me. I really need to stretch!

But, the results of the half-marathon are up!

Wendy and I skipped the costume contest because we didn't want to catch the first wave of busses, which left from University mall at like 5:30 in the morning. We decided to take the last wave of busses, which left at 7:15 in the morning, and we were not alone. The line was weaving around the parking lot from Costco to Nordstroms and beyond. We didn't even board the bus until after 8:30. By this time our driver had about had it with the route and when we turned onto the Alpine Loop he announced over the intercom that he was going to use his bus, worth a half a million dollars, as a bumper car. He then proceeded to drive in the middle of the road and hit every cone on the way up. He was going super fast and made cars coming back down the mountain go around him on either side. It was the craziest bus ride I've had in a long time.

We got up there at about 9:08 AM and decided we'd use the porta-potties quickly before starting the race, but then the queues at the potties were too long and the start of the race was announced so we just got in the crowd of runners and took off...walking...when the gun went off.

The first few miles were really quite easy. By the time I got to mile seven I was starting to feel it. By the time I got to mile eleven I was almost ready to cry. I told Andrew it was a good thing that he and the girls were waiting for me at the very end of the race, otherwise, when I saw them, I would have just stopped running. There were families gathering at around mile 10 to cheer runners on and all I wanted by then was to run into Andrew's arms and have him tell me that I never had to take another step again so it was a good thing he was waiting for me just a hundred yards or so from the finish line.

The last few miles were absolutely painful but I still managed a cheerful smile and wave when Andrew yelled out, "Mommy!" Both the girls lunged for me but Andrew held them back and I plodded on to the finish line. I didn't have much left in me to sprint to the end. 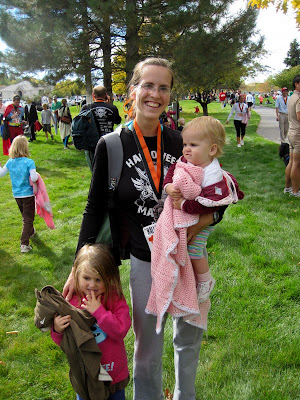 I ended up placing 133rd in my age/gender group (out of 313), 665th out of the 1648 females to finish, and 1184th overall out of the 2443 finishers. My pace was 9 minutes, 23 seconds per mile and my goal was to run a 9 minute mile, but I guess that was good for my first half-marathon. With a little more speed training I think I could do a lot better. I know I was running seven minute miles in the middle of the race but, like I said, it was really the last two miles of the race that killed me so maybe I was pushing a little too hard. I think I want to find a "smaller" race to do next time so it isn't quite as chaotic. It was still fun, though, just really, really chaotic. 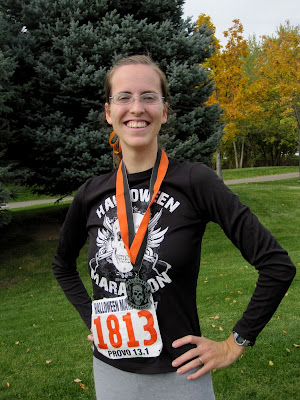