It's the New Year, obviously. Today in church the opening hymn was Ring Out, Wild Bells and if that isn't a clear sign it's a new year I don't know what is. The lyrics aren't half bad but the melody is really quite a dirge. I realize the song talks about the year dying, but it also talks a lot about "happy bells across the snow," and "ring out the false, ring in the new," and "ring in the Christ that is to be." Shouldn't that mean the song is a little happier than a funeral march? Sorry, Crawford Gates, I suppose I just don't understand what you were going for, though we were grateful the song took so long to sing because, due to a mechanical error (the alarm on the iPod didn't go off) and to a baby who was up all night screaming (Miriam), we didn't wake up until 8:10 this morning so it was rush, rush, rush until we walked into the chapel during the final strains of the first verse of your song.
If it had been any other song we would have been more notably late, I'm positive. It worked out well enough and we still got to sing for what seemed like five years before the opening prayer.
To ring in the New Year we went to a "friend's" dance party. I say "friend" because, frankly, I don't think I know the guy, but he worked for my mom when he went to BYU and now he lives up in Canada and he knows my cousin Beth.
Beth got married on December 18th and Sam, the dance-party friend, got married on December 21st. He was trying to convince my mom that she should come up and visit since she had two weddings to go to but instead she decided to stay here (good thing, too—do you know how cold it is in Canada) and go to Sam's New Year Eve Reception and Dance Party.

The funny thing is that Sam is of Japanese heritage. Though born in Toronto to immigrant parents, he was raised in the States. That's not really funny, I guess, until I tell you that my cousin Beth's new husband is also of Japanese heritage.
Andrew saw Beth's wedding invitation and was completely under the impression that we were going to my cousin's wedding reception. So we got there and the bride had blonde hair and he was like, "Uhhh...that's not her cousin," and then he assumed that somehow Sam was my cousin, though he couldn't figure out how because he looks full-blooded Japanese (he is). He finally asked me about it and I had to tell him that we were actually attending the reception of a complete stranger. But that it was okay because my mom was there and, from what I had heard of him, Sam was one of the happiest, friendliest people on earth.
We had a great time, even though we knew no one there. And we didn't even know many of the songs. I tell you, living holed up in Egypt for two years has killed all our knowledge of trends. I probably knew about 10% of the songs that were played that evening (Lady Gaga who? Puh-leeeze no) but we still had fun. 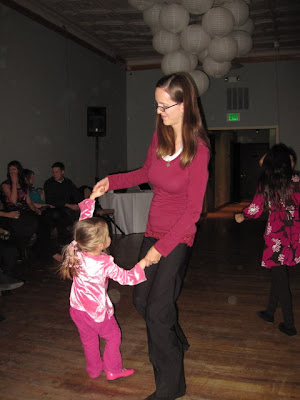 Rachel was a such a vibrant dancer that the photographer was stuck photographing her for quite some time. I imagine this will cause some curiosity when Sam and Lindy look at their wedding pictures—who is this child? I don't think either of them know her...since I don't know either of them. But Rachel can't help that she's outgoing and full of energy. She even made friends with a niece of Lindy—they didn't bother to ask each other for names so they just called each other "friend" all evening. 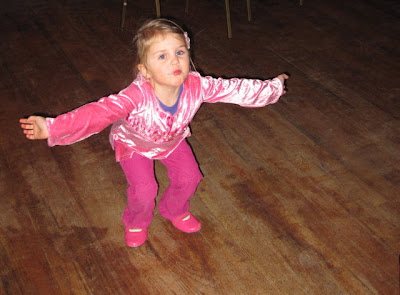 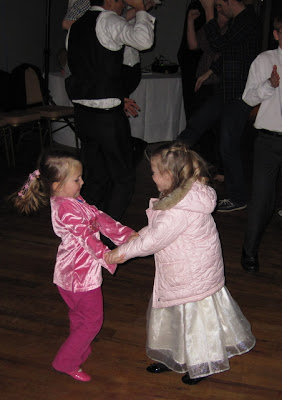 My parents almost pooped out on us at 11:40 but I said, "It's twenty till! You can't leave a New Years Eve party at twenty till!"
So they stayed for a while longer.
At 11:56, Rachel said she was too tired to dance and wanted to go home "right now." She sat down and refused to stand up until they started handing out sparklers and poppers.
My parents just about left then, again. But I said, "There are four minutes until the New Year. You can't leave a New Years Eve party four minutes before midnight!"
And so, thanks to my superb negotiation skills, everyone stayed to ring in the New Year with sparklers and poppers. 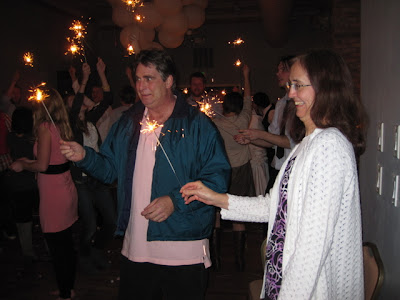 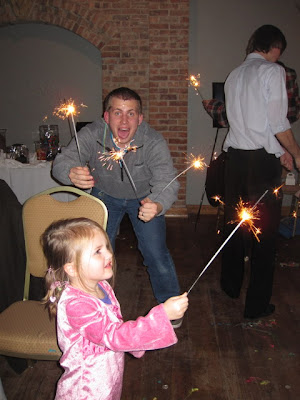 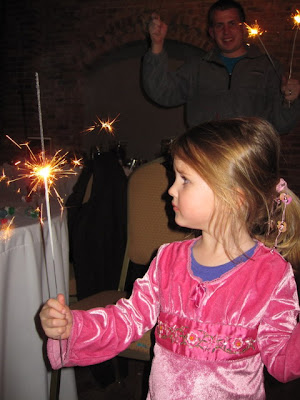 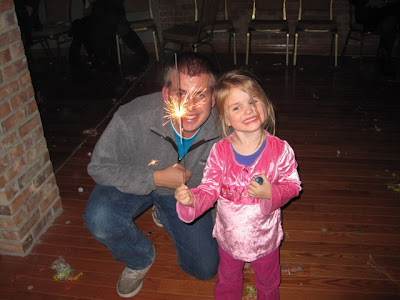 And then we went home even though the party was still going on for another hour. By this time, though,  the only people left dancing were the young single adults. By 11:56 PM when Rachel decided she was too tired to continue dancing, all the parents with small children and anyone older than that were sitting down, just biding their time until the countdown to 2011.
It was a fun way to celebrate the close of 2010, so I'm glad we went even though we didn't know anyone there except my parents (and Kyle, a random kid from the BYU group that went to Egypt, and someone my husband hired to work at the library, both of whom were friends with Sam).
In case you were wondering, Miriam spent New Years Eve in her crib. She's not really one for late-night parties. Andrew's parents spent New Year's Eve in the basement with the baby monitor.
Posted by Nancy at 7:20 PM