The main purpose of our visit to Canada was because Malachi was getting baptized. Unfortunately the kids were at their dad's house all day on Saturday because they were supposed to be having a family reunion with his side of the family (that ended up being cancelled) so we didn't get to see them until Saturday night at the baptism. I may or may not be a little bitter about that; I'm sure I'm not the only one. I can't think of a single reason why they even needed to have a family reunion the weekend we came up from Utah since their whole family lives within an hour radius of each other, except for one sister who didn't even come out that weekend. *grumble* 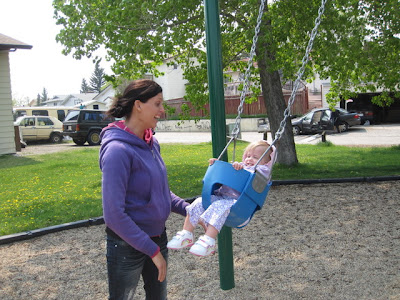 Anyway, we spent Saturday day playing games, going to the park, and (for some of us) preparing talks for the baptism. Abra has this fun game called Bananagrams. It's like Boggle and Scrabble teamed up and made a beautiful baby. It's seriously so fun!
I think it's the first time in my married life that I said, "You know, honey, my birthday is coming up..."
Later in the afternoon we went to visit my cousin Heather. The last time we saw each other she was newly married and I was expecting Rachel and she and her husband crashed at our apartment on the way to Texas. Now we both have two children. Our children have never seen each other and we've never seen each other's children, which is a real shame!
Now they've at least seen each other, even if we didn't get to spend a lot of time together. The girls had fun holding baby Miley. 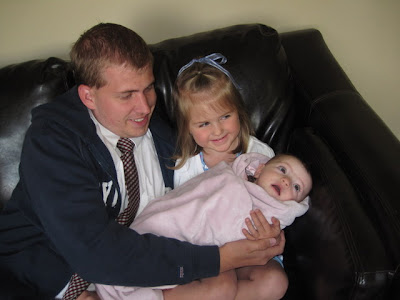 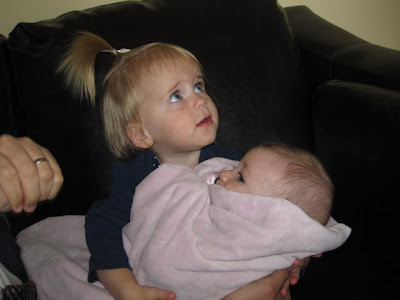 Miriam took the liberty to point out to Miley that she has eyes. Miley didn't mind. She's the happiest baby in the world. Everyone who meets her dubs her "Smiley Miley" and think they are so clever for coming up with that title, but as I discussed before creativity is really lacking in the human race. It's true, though. Miley is as smiley as can be. 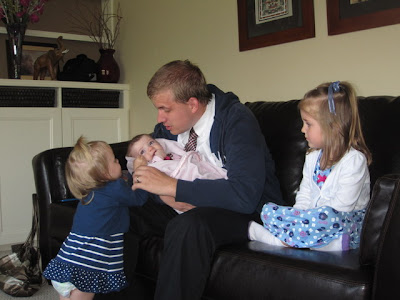 When Sadie got up from her nap the girls played puzzles together. I had told Rachel that she was going to meet a new cousin named Sadie and she looked at me funny and asked, "Is my new cousin a dog?" Auntie Emily's dog's name is Sadie; which has become Miriam's generic word for dog (in addition to dog and puppy). Both girls associate Sadie closely with dogs. I think it was a little bit weird for them to meet a child whose name was Sadie. 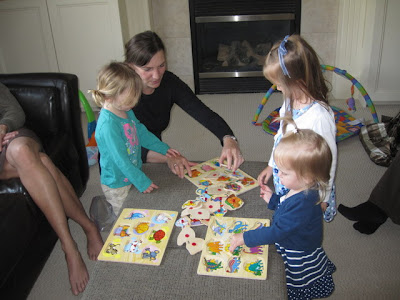 Rachel started acting melancholy while we were at Heather's. She refused dinner and curled up on the couch. Then we realized she had a fever so we borrowed some tylenol. That helped Rachel perk up a bit.
Since we had so many people to transport to the baptism (eleven) and had a limited number of seats in the van (seven), Miriam and I stayed behind at Heather's while she got ready to go so that we could ride with her and her kids in her vehicle. Everyone else went ahead early.
We ended up leaving the house probably five minutes too late because I was trying to figure out how to get to the chapel in Turner Valley. And then, with trying to get out the door with two toddlers (ages 2 and 1) and an infant, there were a few mishaps that happened along the way. And then we turned off in Black Diamond instead of Turner Valley, which added a few more minutes onto our trip (those small Albertan towns all look the same!).
By the time we arrived we were hopelessly late. Andrew was outside the chapel pacing, and wishing that he had at least gotten Heather's cell phone number before he left. Most embarrassing of all, though, was that they had waited for us to arrive! 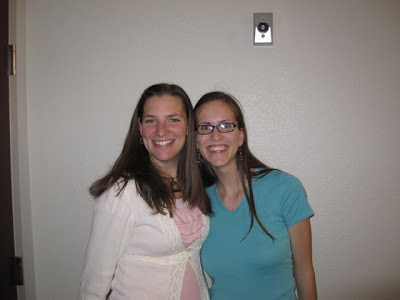 Oh, well, it was only embarrassing for a little while and every moment spent with Heather is a moment well spent.
The baptism was wonderful. Auntie Josie gave the opening prayer, and then Uncle David gave a talk on baptism. Malachi's Grandpa Baker baptized him and while we waited for them to get changed we had some singing time. Mom, Josie, David and I sang Grandma Conrad's song, Baptism is Like a New Birth, and then we just chose songs from the hymn book. Abra gave a talk on the gift of the holy ghost. Malachi was confirmed a member of the church and given the gift of the holy ghost by his grandpa and then his aunt Kathy said the closing prayer.
Malachi (Kai) was absolutely beaming. 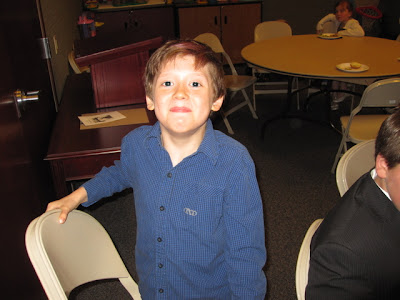 There was one topic that kept cropping up in everyone's conversation; all you had to do was stand around long enough. Deklan got baptized in November of 2007 and, as is customary, the small children were invited to come to the front of the font so that they could watch. Well, it just so happened that this font didn't have glass in front of it; most do. A little girl put her hands out, leaned forward, and instead of hitting glass like she thought she was going to do she plummeted into the font. It was so funny—I don't think people will ever stop talking about it!
Afterwards we had a little party. It was fun to get to visit with some of our extended family. We actually had quite a few family members show up: Lonnie Navratil and her niece Vinnie, Uncle LeRon and Auntie Colleen, Heather and her kids, and perhaps a few more. It was nice to have so much family rally around to support Abra and her kids. 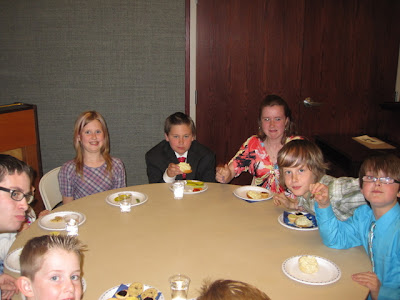 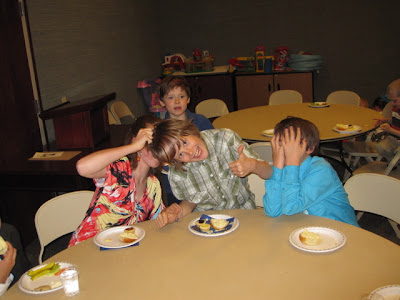 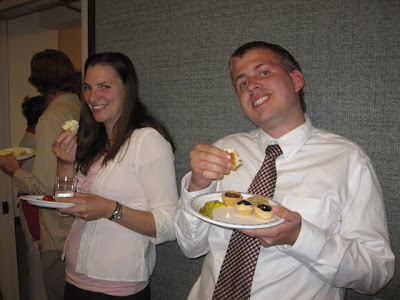 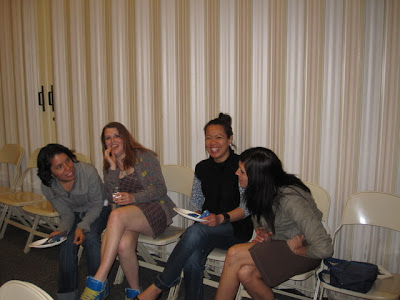 I didn't get any pictures of Malachi before the baptism when he was dressed in white...because I was like twenty minutes late...but we did get a few pictures afterwards. I hope I wasn't the only one with a camera there.

Here's my sister and her cute family: 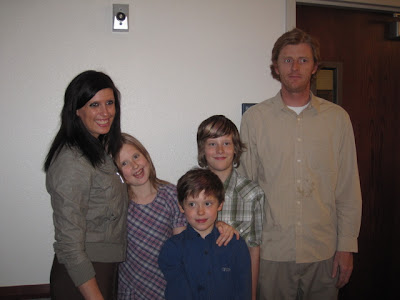 And here is my mom with Abra and Kai. Kai looks exactly like Abra did when she was little, except that he's a boy and she's a girl. 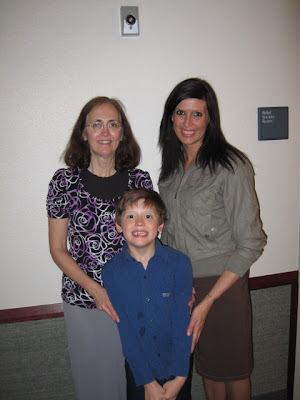 And here's Malachi with his parents: 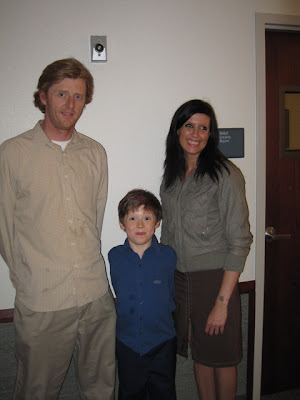 I love how both Billy and Kai have clearly spilled on their shirts.
Rachel spent the whole evening palling around with Piper. She was so excited to meet her cousins!
We drove home, arriving, once again, around 10:00 PM. Rachel had been complaining in the car and being tired and hungry. I told her that she could have a bedtime snack after she got ready for bed. Daddy helped her into her pyjamas and they were just in the bathroom brushing her teeth when she suddenly got violently ill. She spent several minutes puking into the toilet. We were very lucky that she was so close.
Instead of staying up to play with her cousins, Rachel was sent to bed with a throw up bucket.
The poor little thing was miserable.
Everyone else had a great time 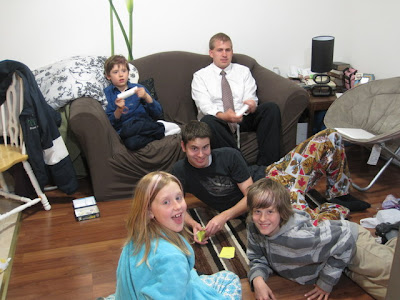 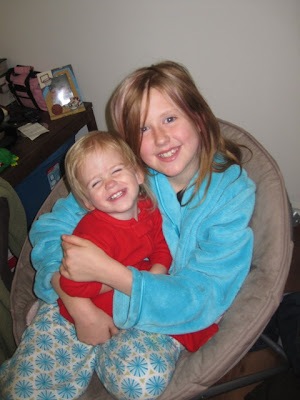 Miriam had to go to bed much earlier than Deklan, Piper, or Malachi. This is a picture I took while she was making the rounds giving good night hugs. It melts my heart.
Posted by Nancy at 3:11 PM