I haven't spent much time outside of the Rocky Mountain range, at least not in North America. I flew to Georgia once with my dad and drove to Minnesota once with my mom (I don't entirely remember the route we took but I do remember crossing Mormon Bridge from Nebraska to Iowa and I know we stopped at Mount Rushmore on the way home).

Other than that I've travelled I-15 from tip to tip several times: California, Nevada, Utah, Idaho, Montana. I've also been to Washington, Oregon, Colorado, and Arizona. If we count Four Corners, I've been to New Mexico. Anyway, my point is that I've spent most of my life in the Rockies. Alberta, Utah, British Columbia, and California are all places I've called home. And they're all in the Rocky Mountain region. You could say the Rockies have been my childhood canvas since they've been east or west of me for most of my life.

It's no secret that I suffer from wander-lust, though, so when the prospect of taking a road trip "east" appeared I jumped at the chance. I will never fully understand the geographical terms for the United States because technically we only went to the "Mid-West" but that felt really east to a west-coast gal like me.

On Tuesday, June 6th we woke up bright and early to hit the road. It was a boring but windy drive through Wyoming—they had signs cautioning light trailers to discontinue driving on I-80 due to strong gusts of winds and saw a truck, the driver of which had unfortunately disregarded the sign, that had been blown over. Luckily our vehicle was adequately weighted down—with seven passengers and four suitcases—so we weren't at much risk of blowing away in the wind.

We stayed the night in Omaha, Nebraska, which is very close to where our friend Joy lives. She and her family just moved into their first home and invited us to stay there but we didn't feel like imposing all seven of us on her considering that they are just moving in. Instead we went to visit her the following morning—her house is gorgeous and spacious. We should have spent the night (we'll know for next time). We used the GPS to get to her house and Andrew programed her name in so when we pulled up in her driveway the GPS announced in its monotone, robotic voice, "You have arrived...Joy."

We joked about programming further destinations with names of "Hallelujah" or "Yippee" just so that we could hear the GPS unenthusiastically proclaim, "You have arrived...Yippee." 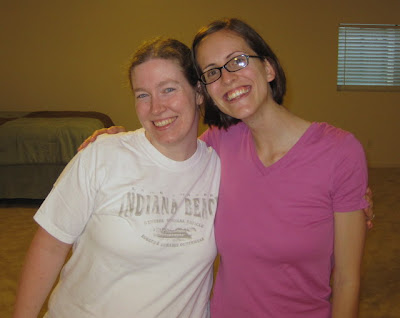 Anyway, it was fun to get to see Joy again! Rachel and Miriam had fun playing with Joy's three girls while the grown ups chatted. Emily's lap was enjoyed by both Miriam and Alice... 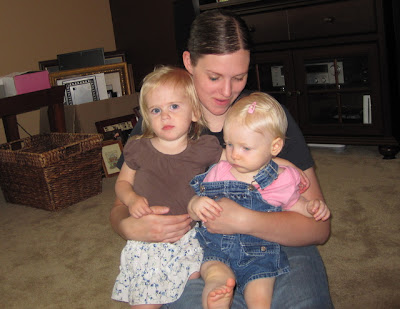 Alice recently turned one and she got a little ball popper for her birthday. It's a machine with a fan that pops balls up into the air. Andrew thoroughly enjoyed that. 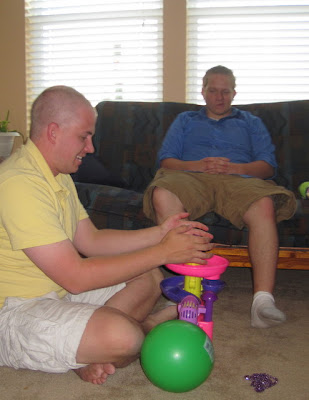 Rachel enjoyed playing with Karen, though Joy's Rachel had a difficult time fitting in. Poor thing. 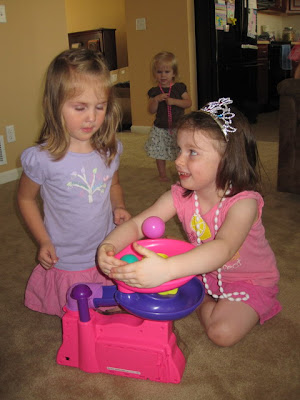 Joy's Rachel is about six months younger than our Rachel, so she is still right in the thick of being three. Our Rachel, on the other hand is a budding four-year-old. Her ability to play well with others has increased dramatically this past year, as has her ability to control her emotions. I've heard that four-years-old is much better than three-years-old and so far that seems to be true...not that we're quite there yet. 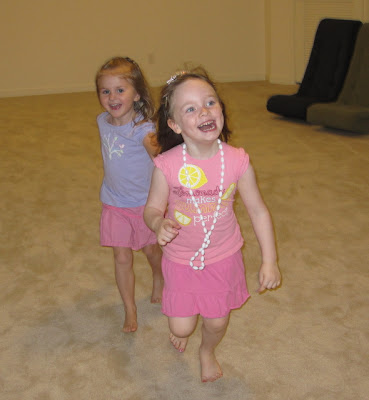 We tried to take a picture of all our girls together but the littlest ones were a little too wriggly for the big ones to handle. Our photo shoot turned out quite humorous-looking. 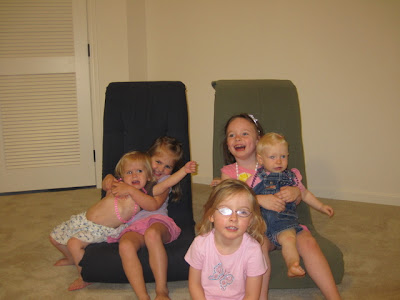 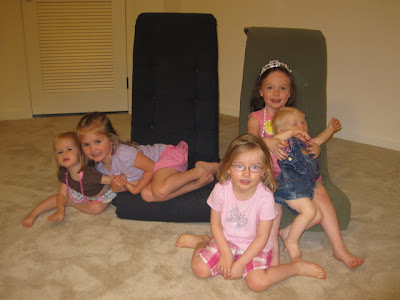 We left Joy's house (far too soon, in Rachel's opinion) so that we could stop by Winter Quarters. Currently, Winter Quarters is a suburb north of Omaha but in the winter of 1846-1847 it was the encampment of the Saints headed west, while they waited for better traveling conditions. It is also where Solomon Hancock, my great-great-great-great-grandfather, died after leaving Nauvoo in hopes of reaching the Salt Lake Valley.

In front of the Winter Quarters visitor's center is a statue of some pioneers pulling a handcart. Rachel had recently watched Legacy in preparation for the trip to Nauvoo and she explained the whole statue to me. 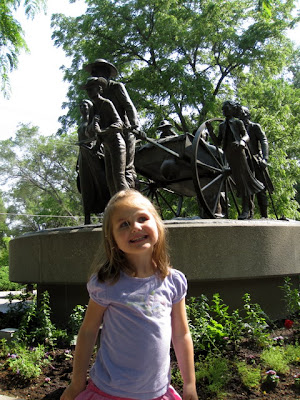 "The pilgrims are pulling their wagon because their cows fell into the water and died."
There's this scene in Legacy, which wasn't scripted, where the ox pulling the wagon slips in the mud and the ox, wagon, and actors all fall into a creek. No one got hurt but everyone looks extremely terrified and since it looked so realistic (because it was a real accident) they kept it in the film. There's another part where the ox is sick...but it doesn't die there, either, so I don't know where she got the death theme.
Rachel can now tell between pioneers and pilgrims as well as wagons and handcarts, oxen, and cows, but it took her quite a few full days at church history sites to get all that information down.
The girls both thoroughly enjoyed dressing up in the pioneer costumes they had for the children to wear. 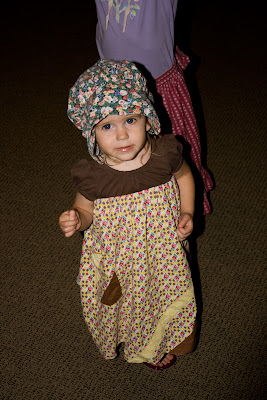 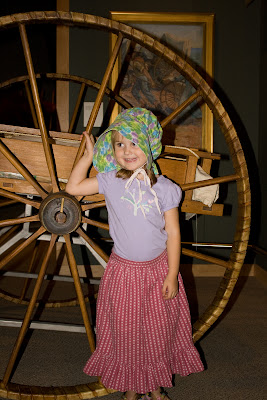 It's a pretty hands-on museum. I like that kind. They had a handcart that we pushed around for a bit. It was pretty easy... 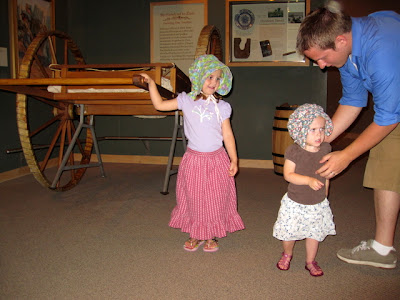 But then one of the sister missionaries put two little rocks in front of the wheels. 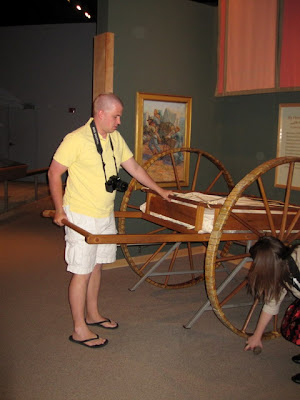 It took Daddy, Grandma, and Rachel all working together to get the handcart over the rocks, and that was just an empty handcart on flat ground. I can't even imagine what it would have been like to pull a full handcart over mountains and creeks and grass and snow. 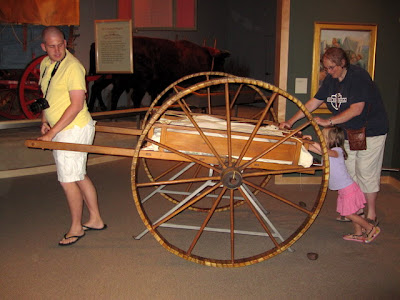 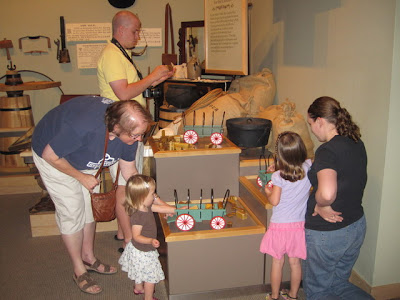 There were also some model wagons that we tried to pack up with essential items for a journey out west—things like flour and vinegar and bedding. 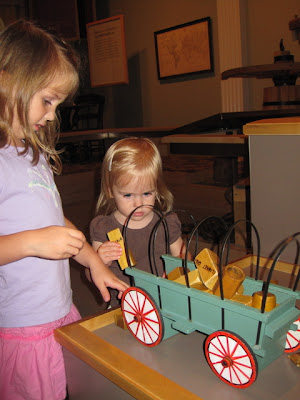 It was a bit like Tetris, trying to get all the packages into the wagon. 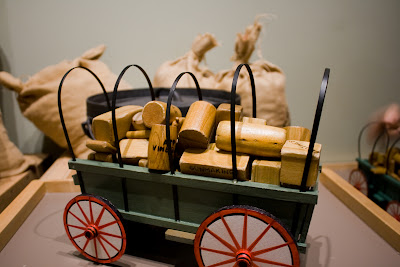 I was struck, especially, by a fact mentioned in the video we watched in the visitor's center: many, if not most, of the Saints who struck out across the plain had no experience camping at all. So trying to get them to learn to walk miles a day, cook over a campfire, sleep under the stars, and so forth, was a real chore for the more experienced members of the team.
The journey was hard enough for me in my air conditioned mini-van; I can't imagine the faith it took for the pioneers to leave their possessions, their home, their temple, and in some cases their family, to walk over 1200 miles to an unknown, undeveloped land. They faced so many trials. That first winter at Winter Quarters was especially trying, and hardly a family was left whole.
Pheobe Adams Hancock, my great-great-great-great-[step]grandmother wrote, "...I left the state of Missouri in the spring. I had eight in my family to care for, Mother and Father Hancock lived with me. Father Hancock was seventy five years old. We had only one small wagon and I walked every mile to the State of Illinois. We lived in Hancock County till we left for the Rocky Mountains. We left Nauvoo in 1846 and reached a place we later named Winter Quarters and my husband [Solomon] died 2nd December 1847 there."*
Solomon's daughter Eliza died the following month and was buried alongside her father.**
I wish I would have known this before I left so that I could have explored the Mormon Cemetery next to the temple. Alas, I'm just getting in to this whole family history thing; I have so much to learn. We were able to visit the grounds of the Winter Quarters temple, however, before packing back into the van. 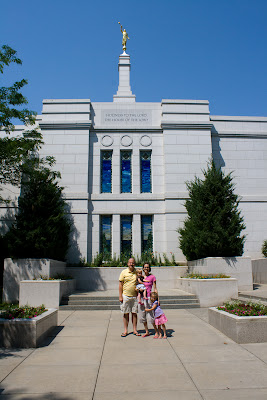 The stained-glass windows were gorgeous. 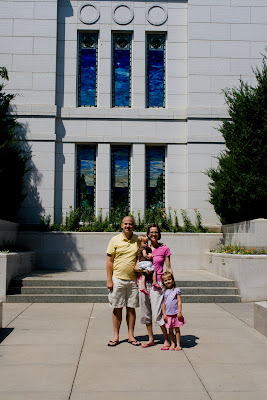 It was just a few short hours to Nauvoo from Omaha, though I'm sure it would have taken us much longer if we had been pulling handcarts. When we were just outside of Nauvoo, but still in the middle of nowhere, the GPS said, "Left turn in .5 miles." As happenstance would have it, there was a street on our left at that very moment, so Andrew made a quick lefthand turn onto a dirt road. It was pretty funny. He was sure he had followed the directions correctly but then the GPS said, "When possible, make a legal U-turn," and he quickly realized his mistake.
We got to Nauvoo with plenty of time to watch the Sunset on the Mississippi, which I'll write about in my next post.
* http://www.softcom.net/users/paulandsteph/jalger/samuel&clarissa.html (from Utah History Encyclopedia)
** http://elaineriddle.blogspot.com/p/solomon-hancock.html Eliza is the daughter of Solomon and Alta. Alta was Solomon's first wife and she died in 1835, just  five years or so after joining the church.
Posted by Nancy at 11:57 PM