Driving out to Mount Rushmore is kind of humorous. There are loads of random things to do, just off the side of the highway to lure tourists in. We fell for a couple of them: Bear Country and Sitting Bull Crystal Caverns. We ignored Reptile World, and some eerie gravitational/magnetic spot, among other things. 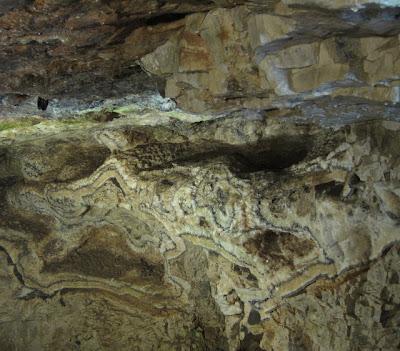 Going down inside the cave was neat. I haven't been that deep inside a cave in years...or ever. I'm not sure. I know that when I was really little—not much older than Rachel—my family went to Timpanogos Caves and I cried because I didn't get dripped on, which our guide then said was good luck. Our guide through Crystal Caverns called them a "cave kiss." I'm sure Rachel will remember the cave—she thought it looked like it was covered in diamonds and wondered if she could move in and have it be her castle (in the two minutes that she decided to be brave instead of clingy and terrified).
Rachel did much better than when we went through Hezekiah's Tunnel, that's for sure! She only screamed a few times instead of continuously wailing. She must be growing up.
There wasn't much in the way of stalactite and stalagmite, but there was a whole lot of dogtooth spar, which is what brings the Crystal Caverns both their name and fame. 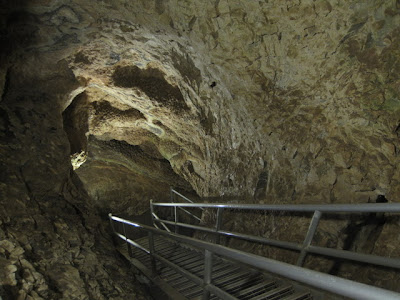 It was a long way down the stairs, which were steep and narrow. I carried Miriam the whole way and made Andrew carry Rachel. I didn't think it was going to be as hard as it was to walk down the stairs while holding a baby, but in addition to the stairs being steep and narrow, the railings were cold and wet. By the time we made it down the first staircase my hand was feeling a bit numb and I could hardly grip the railing at all. 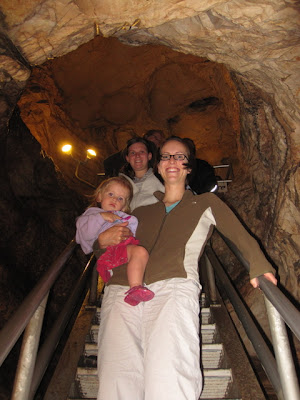 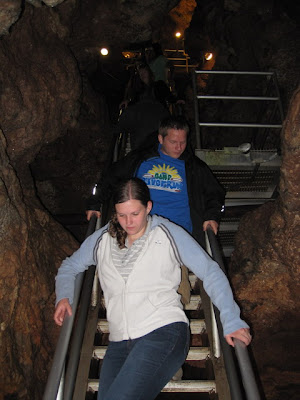 The dogtooth spar found in the Crystal Caverns is among the biggest in the world. 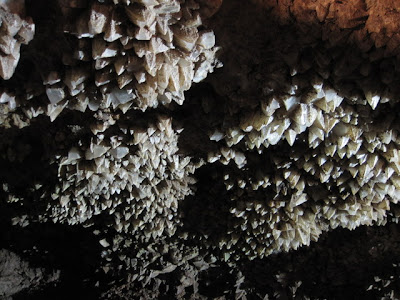 And it was everywhere. 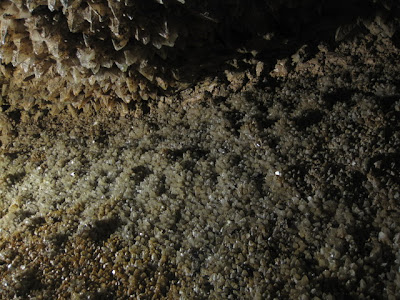 It's no wonder Rachel wanted to claim this cave for her castle. It even has a room inside called the Crystal Palace Room.
Dogtooth takes a long time to grow and usually only grow in water, so chances are this cave was once full of water (for a long time). More evidence of that is the abundance of fossilized sea life that has been found inside.  Even though it's abundant, dogtooth spar is relatively invaluable, as far as crystals go so this cave was not very interesting for miners. 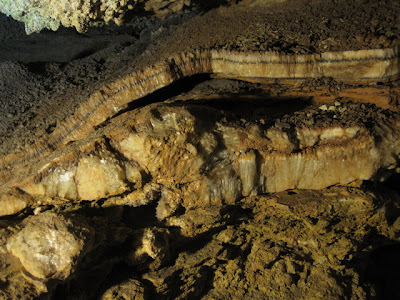 The cave was interesting for explorers, though, including us. When it was time to go we had to wait at the bottom of the stairs while another tourist group came down. 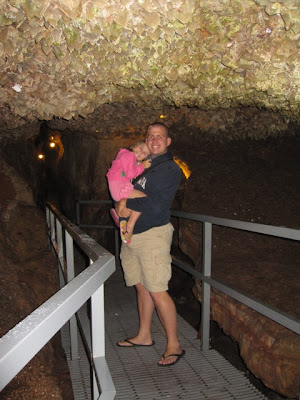 There's no room on these stairs for two-way traffic! 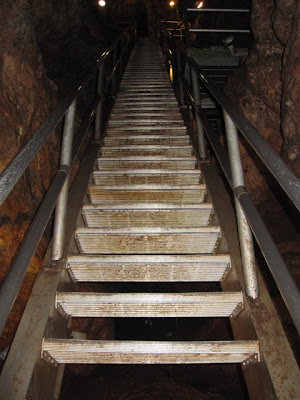 At the entrance to the cave, there's a smaller cave that you can explore on your own. I think it's called Bear's Cave, or something like that. 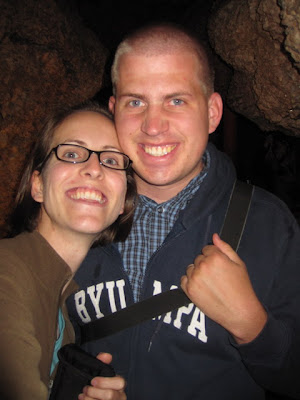 It's not rigged with lights like the bigger cave, so instead they have a cartful of flashlights for visitors to use. Rachel and Miriam were excited to get to hold their own flashlights. 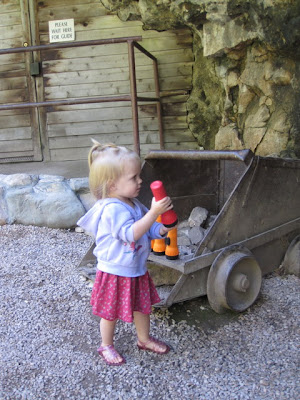 There was also an old-timey sluice box out in front of the gift shop. Another family had purchased a kit (of dirt mixed with a couple of gems) so that their child could do some panning. Rachel really wanted to but we, unfortunately, were running out of time! I really didn't think it would take us as long as it did to get to Mount Rushnmore but we kept stopping and doing such fun things that our day was already half over! So back into the car we went, kicking, screaming, and all. 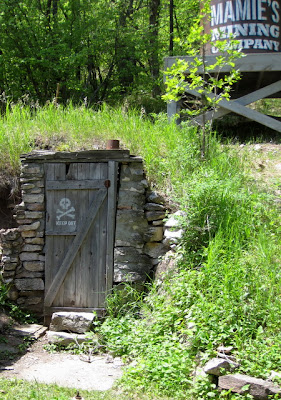