A real sunset by the Mississippi (Friday, June 10th)

Just before we were going to put the girls down for the night, Grandma came bustling into the hotel room.
"You guys have to come see the sunset!" she said, "The lighting on the temple is just perfect. It's beautiful."
We said something about how we'd just lie the girls down and then head out but Grandma said no.
"You have to go now—it will be gone in 10 minutes!" 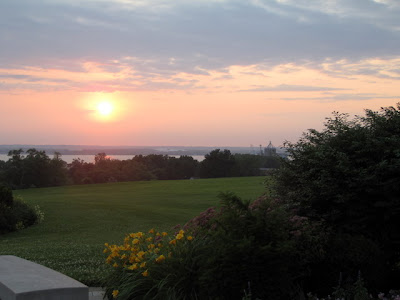 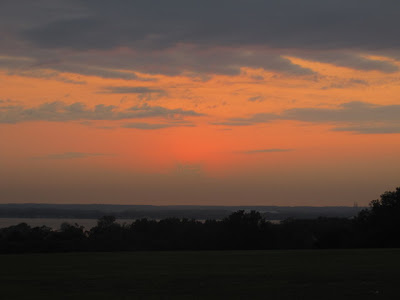 I was still wearing my bathing suit, so I quickly changed into some dry clothes and we rushed out to the van with our barefooted, pyjama-clad children in tow. And do you know what? It was worth it... 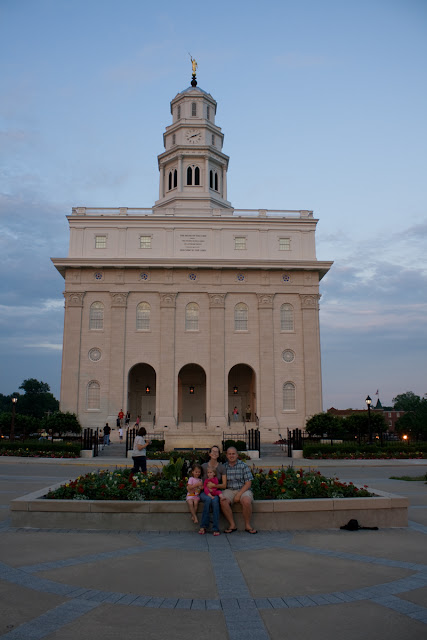 ...even if we did look a little frazzled. 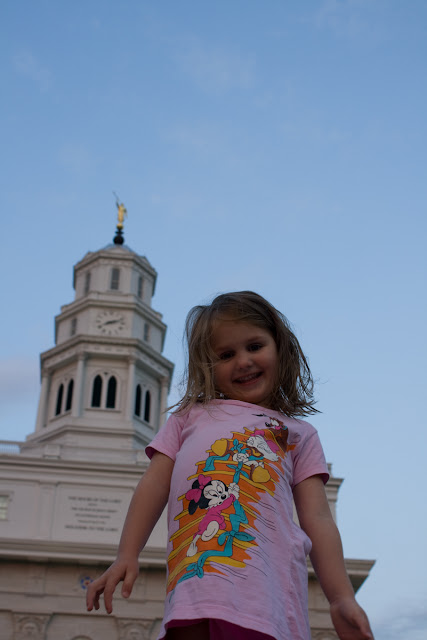 The lighting on the temple was just perfect, it was a wonderful way to finish off our day, and our children weren't too upset about postponing bedtime, either. Win, win, win. 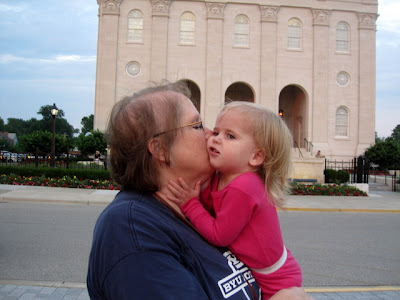 We took several pictures of the temple. It's almost impossible to take a picture of the temple and have it not turn out looking beautiful. Temples are meant to be places of love and beauty. 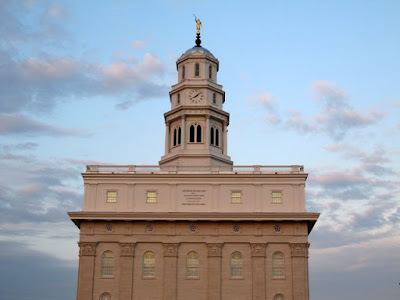 It's hard not to capture that beauty because "even its external appearance seems to hint of its deeply spiritual purposes."* 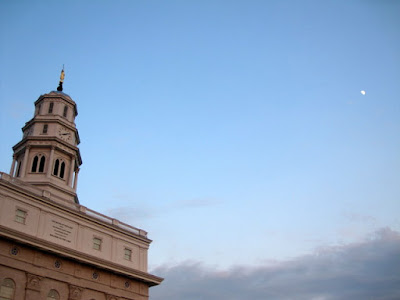 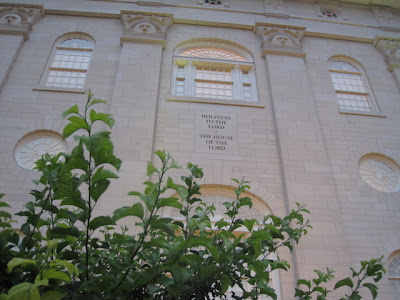 As you can see,

Over the door to the temple appears the tribute “Holiness to the Lord.” When you enter any dedicated temple you are in the house of the Lord.

In the temples, members of the Church who make themselves eligible can participate in the most exalted of the redeeming ordinances that have been revealed to mankind. There, in a sacred ceremony, an individual may be washed and anointed and instructed and endowed and sealed. And when we have received these blessings for ourselves, we may officiate for those who have died without having had the same opportunity. In the temples sacred ordinances are performed for the living and for the dead alike. 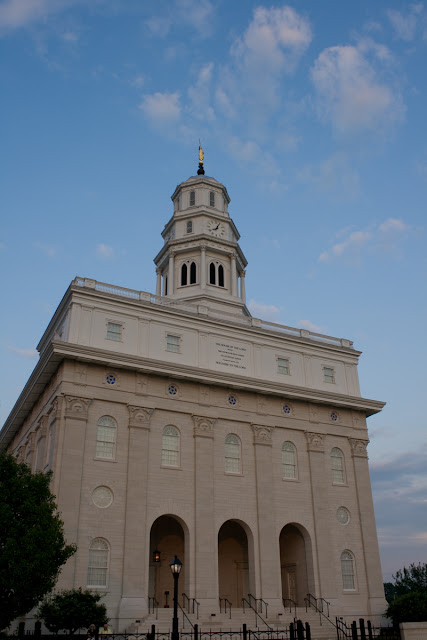 Layla, my step-cousin-in-law through marriage (but whom I'm glad to have the privilege of being related to no matter how circuitously; she's a great friend), describes the temple as her "safe haven." I certainly have to agree with her. The atmosphere of the temple is peaceful and heavenly. Everyone inside is busy, yet perfectly at ease. There's no rushing and few worries. If Disneyland hadn't already taken the phrase "happiest place on earth," I'd gladly use it to describe the temple. 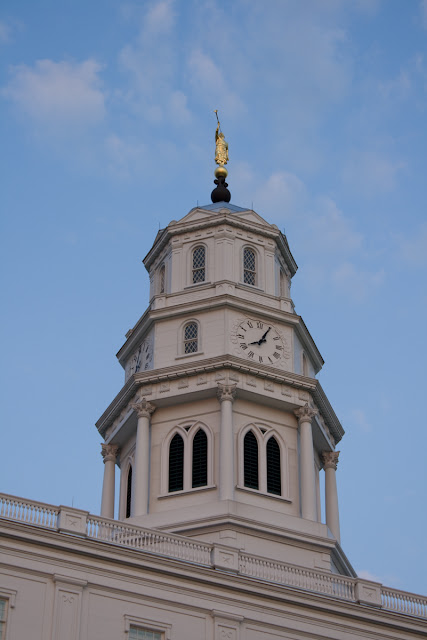 There's an actual bell in the bell tower of the temple. It's pretty unique nowadays to have a bell tower on an LDS temple. The Nauvoo temple is unique in many ways, actually. 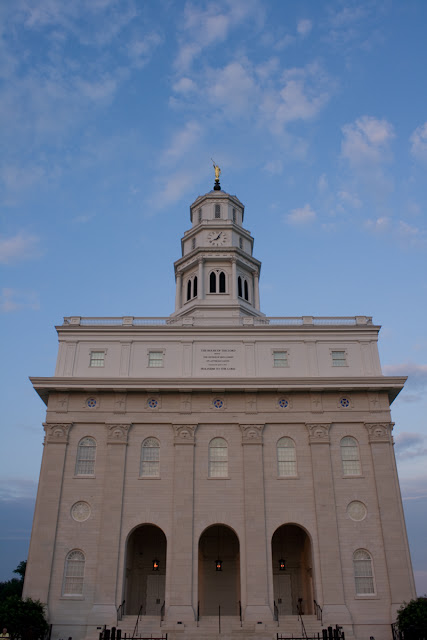 The sunstone and stained-glass star are particularly unique to the Nauvoo temple. 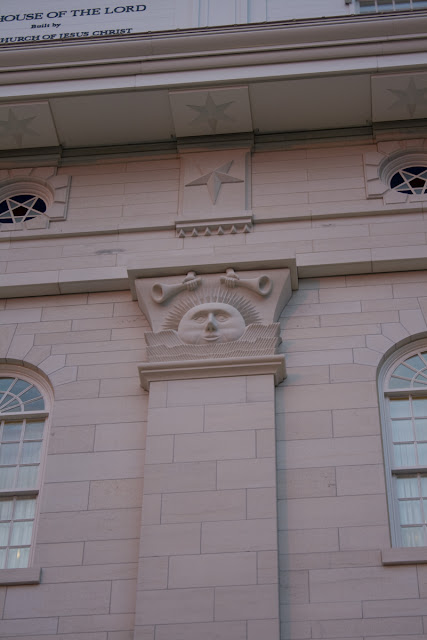 We believe in the Plan of Salvation: that we lived with Heavenly Father before we came to earth and that it is our goal to return to live with him again. After the resurrection, we will be judged according to our knowledge and deeds and given "an eternal dwelling place in a specific kingdom of glory." Those kingdoms of glory are the Celestial Kingdom, the Terrestrial Kingdom, and the Telestial Kingdom. The Celestial Kingdom is represented by the sun, the Terrestrial by the moon, and the Telestial by the star.
Several LDS temples include suns, moons, and stars in their design, but sometimes, as is the case with the Nauvoo Temple, they are in a wonky order, at least when you think they are supposed to be representative of the kingdoms of glory (where the star should be at the bottom, the moon in the middle, and the sun at the top).

Instead, Wandle Mace, foreman for the framework of the Nauvoo Temple, has explained that the design of the temple was meant to be a "representation of the Church, the Bride, the Lamb's wife" (Wandle mace, Autobiography 207 (BYU Special Collections)). In this regard Mace references John's statement in Revelation 12:1 concerning the "woman clothed with the sun, and the moon under her feet, and upon her head a crown of twelve stars." This explains why the Starstones are at the top of the temple ("crown of twelve stars"), the Sunstones in the middle ("clothed with the sun") and the Moonstons at the bottom ("moon under her feet").**

This was news to me; I guess you really do learn something new every day.
* The Holy Temple
**http://en.wikipedia.org/wiki/Nauvoo_Temple#History
Posted by Nancy at 1:36 PM