Sunset by the Mississippi (Wednesday, June 8)

As I said, we got into Nauvoo just in time to rush over to the stage for Sunset by the Mississippi. It's not actually a sunset by the Mississippi, though we were near the Mississippi and the sun did set. It's actually a show put on by the young performing missionaries—Auntie Emily played the flute in the Nauvoo brass band last year, and that's where she met Uncle Morgan, who was the percussionist. That's part of the reason we went to Nauvoo, because they really wanted to (but couldn't afford it unless Grandma came along) so that they could do stuff in Nauvoo that they couldn't do as missionaries...like hold hands and be all romantic. 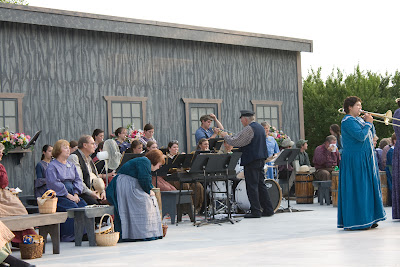 Before the show they invited the children from the audience to decorate paper hats and march in a parade around the audience and stage. Rachel wanted to so badly and so I went up with her (because she was too nervous to go up by herself) but she was a little disappointed when we got up there because she had been under the impression that they would get to dress up in pioneer clothes. Still, she had fun decorating her hat, as did Miriam. I drew a pioneer on Rachel's hat for her and everyone who passed by remarked about what an advanced-looking figure that was for a three-year-old to be drawing. I didn't correct them and tell them that I had been the one to draw it because...well...they all thought Rachel drew it so that doesn't say much about my drawing skills, does it? 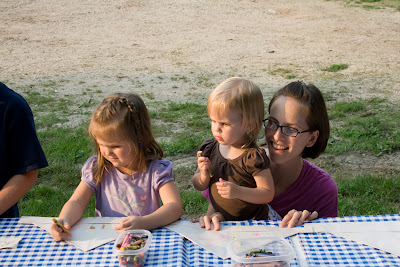 Rachel didn't start acting out until it was time to line up for the parade. 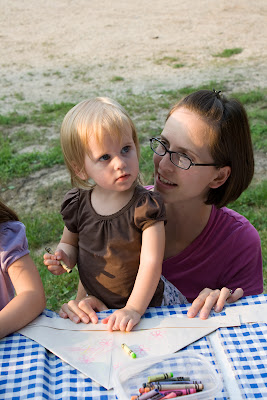 It was not a cheerful parade. At least for us.

But, being the mean mom that I am, I made Rachel march in the parade, anyway. She's the one who dragged me up there in the first place. So, we're standing in line and I'm wearing Miriam's hat and holding Rachel's hat because neither of my kids want to wear their hats suddenly. I'm sure I look very cool. Some flags were being passed around and Rachel decided she'd like to carry one of those around, though she vehemently refused one of the instruments. 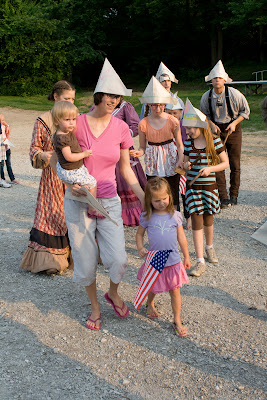 A young missionary came to stand beside us. I think they were told to try to get the kids comfortable enough with them that they'd march without the assistance of the parents. That is a laughable idea. Miriam wasn't about to let anyone but me hold her and Rachel wasn't about to hold anyone's hand but mine.

"Rachel," I answered for her after a few uncomfortable moments of silence, "And this is Miriam."

"Nice to meet you, Rachel. Miriam. How old are you?"

"So, are you excited to be here?" the missionary asked.

"Not really. We were, but our feelings are wavering."

It was then that I realized his questions had gotten a little too ambiguous. Was he asking if we were excited to be in Nauvoo or in the parade? My answer was correct if we were talking about the parade but false if we were talking about Nauvoo. I tried to fix my answer and ended up sounding like an idiot and then he says, "Okay, we'll I'll march next to you!" which is just what you want someone to say after you've made a complete fool of yourself.

Rachel dragged the flag on the ground—real respectful, I know—and I ended up taking it away from her and handing it to Miriam, who joyfully waved it around. Rachel cried when we marched around the audience because she just wanted to go on stage. She perked up a bit when she realized we were headed in that direction. 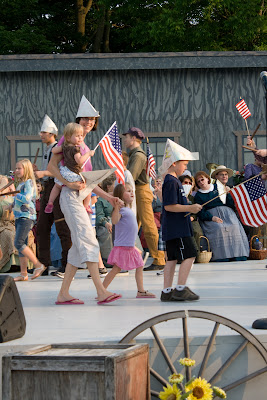 And then they had the kids lead the audience in the pledge of allegiance and the national anthem, which meant that I had to help lead in that, too. That's always hard for me to do because I don't know all the rules. I took my hand off my heart before they'd posted the colours and embarrassedly slapped it back on. Luckily I know both the pledge and the anthem or it would have been really embarrassing. I mean, more embarrassing than having my three-(almost four!)-year-old tread on the flag.

The show was good. We spotted Karen's cousin, Marie, who was there in Nauvoo as a senior missionary with her husband, Monte. They're there on a six-month mission—the church needed teamsters to drive the wagons and I guess Monte is an experienced teamster so he and his wife signed up to volunteer. It was funny to watch all the elderly couples singing and dancing on stage because I know not all of them knew they'd have to perform when they got their mission call. 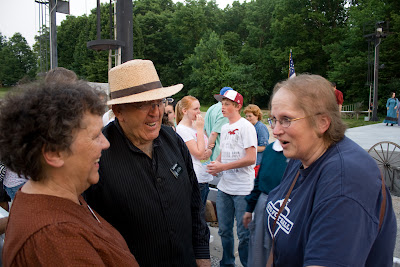 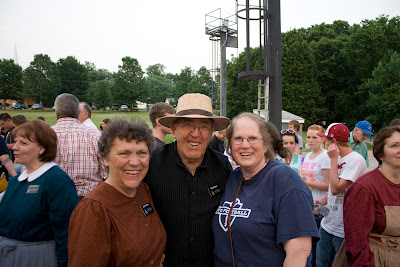 Karen and Reid went to Nauvoo last year (to see Emily in the brass band) and after one of the shows Karen asked one of the elderly missionaries if he knew about the song-and-dance part of the mission.

He said that he didn't but there was a "big back row" for those less enthusiastic about performing. 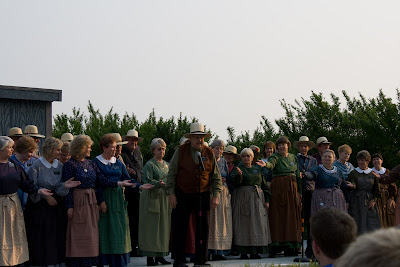 The younger missionaries obviously know they'll be performing since they had to audition to get into the band or the chorus/acting troupe. They were all energetic. The elderly missionaries...not so much. There were some who looked thrilled to be singing on stage and there were some who looked like they were doing it because they said they'd do it. 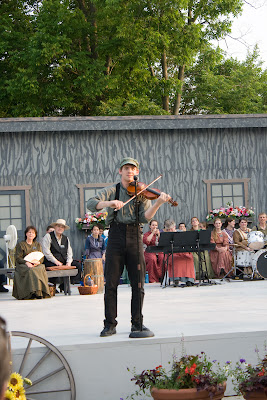 It was a good show, though being outside was a little...buggy. It was alright during the first show, but we stayed to watch the BYU Folk Dance Ensemble and the bugs got to be a little ridiculous. Since Sunset bn the Mississippi happened to be when the sun was setting, by the time the show was over it was dusky and all the bugs had come out from hiding.

The day had been incredibly hot so the bugs were happy for the cool evening breezes. And were very attracted to the stage lights. Those poor dancers were dancing under a veritable canopy of insects. I was being pelted by bugs, though not, apparently, any that bit—mostly moths and mayflies—but I know there were more bugs on stage than in the audience. I even saw one of the singers choke on a bug.

We were happy when the show was over; not because the dancing was bad, but because we wanted to get out of the bug-infested stage area. We didn't end up getting back to the hotel until nearly 10:00 and the girlies were grumpy and sleepy, though I don't think they fell right to sleep. It's hard to sleep in strange places.
Posted by Nancy at 3:48 PM