On Saturday Josie participated in Utah's All State Honour Choir—they performed up in Roy, which is a little over an hour away. Miriam, my mom, and I went to watch. Rachel wanted to come so badly but she's been coughing so hard that she's been throwing up and I couldn't really imagine trying to deal with that in the middle of a concert so she had to stay home. At first she was a little upset by the idea but eventually we were able to bring her around to accepting the idea—she'd get to stay at home with Daddy and he'd let her watch Harry Potter. It wasn't a bad deal.

But then my mom came to pick me and Miriam up and Rachel got upset all over again. My mom had brought a new colouring book as a surprise for Miriam (for entertainment purposes at the concert) but instead decided to leave it with Rachel, who had followed us out to the car in a last ditch effort to convince us to take her with us. She cheered up quite nicely after the colouring book was in her hands.

The drive to Roy was relatively uneventful but I think half the traffic on the freeway was going there. The auditorium was packed but we found some nice seats on the front row. We were hoping we'd be able to see Josie on stage, and we did. But only for a minute. 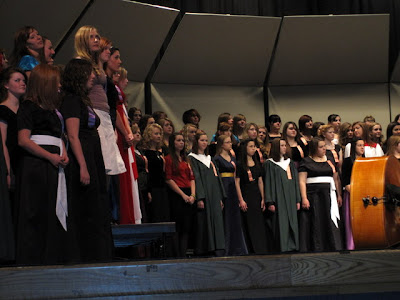 After the rest of the girls filed onto stage we had no hope of seeing her. I think two or three (and maybe even four) rows came to stand in front of Josie's row, which was already standing on the floor.
The choir sounded great though, considering they'd only been practicing altogether for two days. The men's choir sang first and then the women's choir and then they sang together. Most of their songs were slow and melodic, which was fine except that the man next to me kept falling asleep. I'm sure he wasn't the only one. The last song for each choir was a lively song but I think they should have had more. 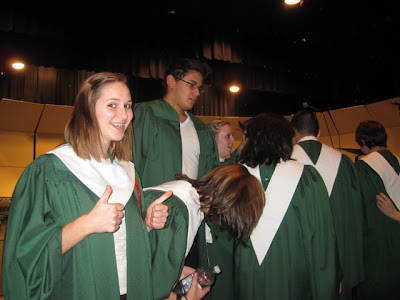 When the combined choir sang, the boys came and stood right in front of us (because we were on the first row) while the girls remained on the stage. I'm not sure that was a great idea because the boys completely overpowered the girls (at least from our aural perspective). I think they should have had half the girls move onto the floor and had half the boy go up onto the stage...but that's just me.
Also, Josie's director instructed the kids to wear their choir robes but all the other schools had their students wear suits and dresses. Josie's school kind of stood out, but that's alright. Perhaps next year her teacher will let the kids just wear regular clothes. Miriam wasn't too keen on visiting with Josie after the performance (she was getting sick, I think, so was a little grumpy) until Josie told her that she had to go onto the school bus to get her things. Miriam got to go on the bus with Josie and was thrilled to pieces about it.
Josie rode home with us and was so exhausted that she didn't say much—she'd been up since 6 AM after coming home from practice at 10 PM the night before. They'd been practicing nonstop for two days. I think she was happy to have the opportunity to sing and was equally as happy to have it all end.
Posted by Nancy at 1:12 PM