This morning our neighbours came over to invite the girls to play. Again. They've called on us just about every day this week but for some reason Rachel was loathe to accept the invitation. Today they invited both Rachel and Miriam over to play and the girls were both very excited about that—strength in numbers, I guess. I asked Rachel why she was so against playing with Emily this week when during Christmas break she practically lived at Emily's house.

"You were over there all the time," I pointed out.

"But I slept here still so this is where I lived."

Good point. Still—it's just silly that she's been refusing to go over to Emily's house since then. I was excited that she was finally excited about going over there.

Unfortunately we were still in our pyjamas eating breakfast—I made a deal with the girls last night that I would read them stories if they wouldn't come bug me in the morning (since it was way past their bedtime by the time we got home from Relief Society) and they totally followed through on their end of the deal. They didn't come into my room until 9:00! It was lovely. But it made for a late morning so we said we'd finish eating breakfast and then get dressed and then walk over.

Rachel thought it would be fun to wear their matching outfits. Grandma got Rachel's outfit a while ago and Auntie Sarah gave Miriam her outfit for Christmas. It was a happy coincidence that they matched.

Miriam wore her outfit on Christmas day but hasn't worn it since.

She's recently become terrified of ladybugs. She keeps having nightmares where ladybugs and/or love bugs eat her. Yesterday when she woke up from her nap she was virtually unconsolable for a half hour—no one had any idea what she was talking about...until I caught "love bug" and "sharp teeth." Ah—another nightmare.

We got her into the ladybug outfit but the minute she realized what she was wearing she dissolved into tears. She was absolutely sobbing by the time I decided to just give up convincing her to wear it and let her chose something else. 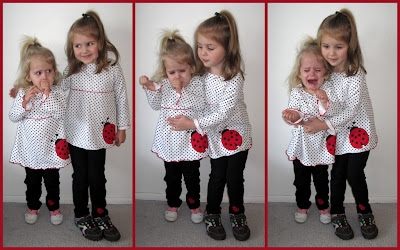 It's kind of sad because it's such a cute outfit.

There are times in a young mother's life when she dreams of having her little girls wear cute, matching outfits—like for family pictures or when going to a party or just because it's ridiculously adorable.

Unfortunately, until we kick this ladybug phobia I don't think it's going to happen in the near future.
Posted by Nancy at 1:20 PM