Yesterday we went to the BYU basketball game at the Marriott Center. Since I haven't been feeling very well lately I quit being a parent and allowed my children to wander freely among the other adults in our party. Auntie Sarah was happy enough to have Miriam dancing around her, I think, so it worked out alright. 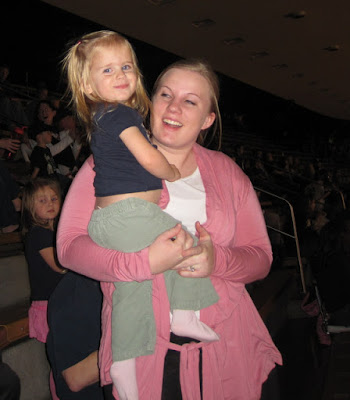 The girls got surprisingly into the game. Rachel asked when the players were going to fight. We told her there is no fighting in basketball and then I joked that one day we'd have to take her to a hockey game. Hockey is a lot like basketball—both make sense to me and both were invented by Canadians. Their one big difference though (besides the fact that one is played in a court with a ball and baskets and the other is played on a rink with a puck and sticks) is that basketball does not allow a good fight. Hockey, on the other hand, does.
I am still actually not sure what prompted Rachel to ask that question.
But she was completely taken up in the game. She figured out which team was the "good guys" and cheered every time they scored. When Cosmo came out to throw t-shirts into the crowd she would jump up and down with her arms up even though we were sitting in the nosebleed section.
No pictures that I took of Rachel turned out, but she was a very cute little spectator.
Miriam loved the music and would dance around very dramatically. She also made her way from person to person, bumming sips of soda or bites of popcorn. 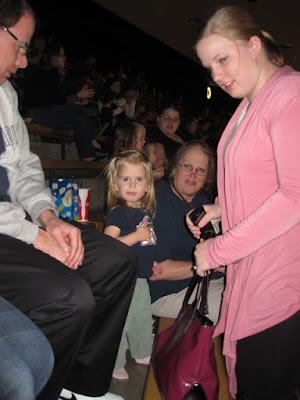 At one point in the game she turned to Grandma and remarked, "This is a good little place!"
We bought tickets for my family to come, too, but nobody wanted to so we gave the tickets to Amanda (who is in town from DC) and her family. It was fun to get to catch up with Amanda—we've seen each other in passing but haven't really had time to catch up since she came out to visit us in Egypt. 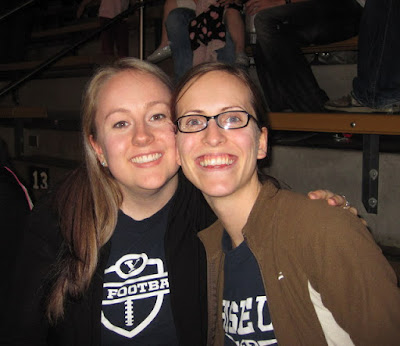 When we came home, I slept while Shayla, a family friend, played Princess Dominoes with my girls and Grandpa made dinner. Then we ate dinner together and Shayla went home (well, to her sister's in-laws because the rest of her family is out of town). Then Andrew and I played games with the girls and rang in the New Year at 8:00 with some sparkling apple cider.

My parents came over and we played Alphabet Bingo and then we started the process of putting the girls to bed. And then Cristina and Matt came over to join us and we finally finished putting the girls to bed. And then, miraculously, the girls stayed in bed and we were able to play Bohnanza (which is a really fun game and far cheaper than Ticket to Ride: Europe (which Andrew still wants even though his mom got him Ticket to Ride: USA for Christmas (picky, picky)). It might have just gone on my gift list for him).

It was a good and relatively low-key New Year's Eve, which was good because it's just what we needed after that basketball game. When we got home Andrew said, "I don't want to do anything too much for New Year's Eve. I've got my introvert on and am really excited that we're just planning on staying at home."

I assured him I hadn't planned anything huge (not that he should have been worried because I don't plan huge parties) and I think the evening turned out just about right. In fact, we were talking with Matt and Cristina when Cristina said, "Oh! Happy New Year. It's 12:02!" We obviously weren't paying much attention...

Thanks to everyone who took part in celebrating the passing of the old year and the birth of the new year with us. Good luck in 2012!
Posted by Nancy at 8:50 PM