A few days ago a friend sent me an invitation to Pintrest. So I joined. I didn't really think I'd like it but lo and behold...I do like it. So far I have made Winger's Sticky Finger Sauce (which was beyond good and way cheaper than actually eating there), popped popcorn in the microwave in a brown paper bag, and today the girls and I made this craft that I found (I think it was originally from Martha Stewart).
It was really pretty simple but difficult for my girls. We just sharpened some crayons onto a sheet of wax paper, folded the wax paper in half, and ironed it before tracing and cutting out our hearts. 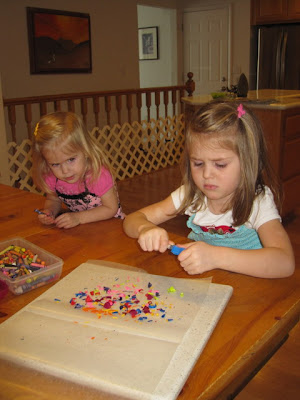 Rachel found sharpening crayons to be a difficult task. Miriam's job was selecting which crayons to sharpen—she thought that was relatively easy. 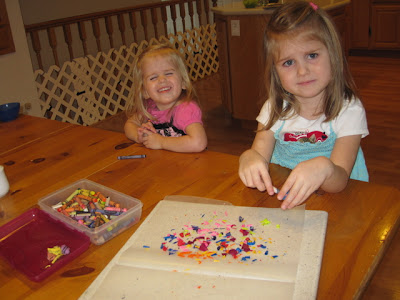 But the bonus was that we had pointy crayons when we were finished, which meant that the girls spent the next who-knows-how-long colouring with their like-new crayons.
We did it twice and then when we were finished I used a needle and thread to tie a loop on each heart so we could hang them in our window. It wasn't a very sunny day—we had our second real snow storm of the season today—but you can see the light shining through our hearts (and the stained glass hummingbird that my dad made for Rachel when she was a baby). 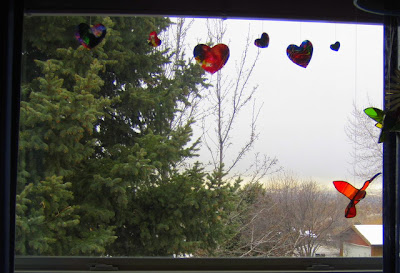 I imagine they'll be even prettier on a sunnier day. 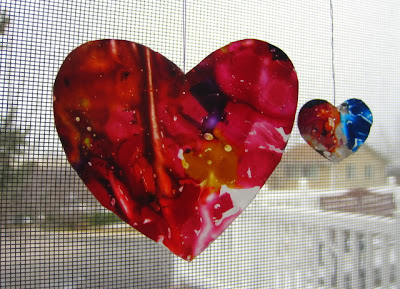 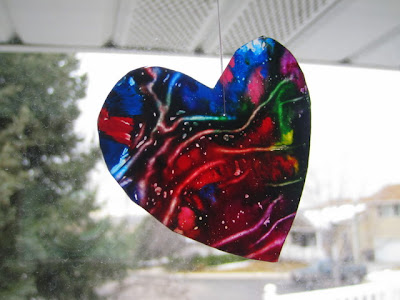