Somehow tomorrow is February. I'm not really quite sure how that happened.

We finished reading Harry Potter and The Sorcerer's [The Philosopher's] Stone this evening. While we were reading, Miriam fished the Mr. Potato glasses out of the toy box and said, "Look at me! I'm Harry Potter! Me has Harry Potter glasses!" 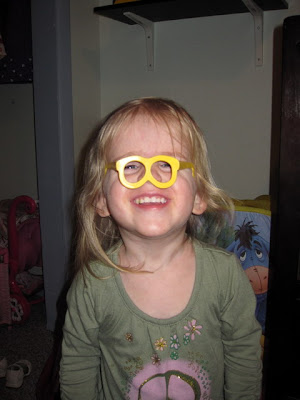 Then, because their favourite character in the story is Hermione, the girls had to show me their Hermione faces: 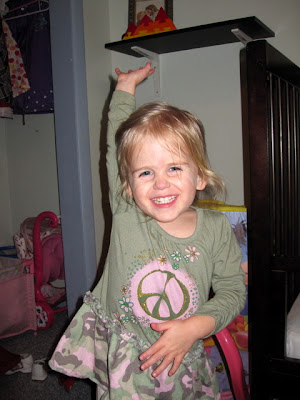 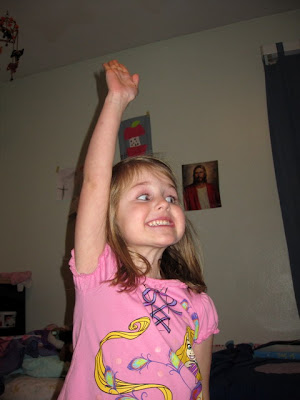 Rachel begged and begged to start Harry Potter and the Chamber of Secrets but I told her we had to wait until tomorrow. I feel like I spent half the day reading to her. I read two Dr. Seuss books to her (which Grandma keeps in her bedroom, apparently so that when the girls get tired of jumping on her bed they have something else to do so they don't get bored—Rachel told me so) which took like half an hour (because Dr. Seuss was rather prolific in his poetry). Then we had to do some library books. And some short stories from our own collection of books. And Harry Potter.

Besides reading we did a bit of lounging on the couch—we're still recovering from being sick—and watching television. Rachel stayed true to her word and stayed in bed (my bed) with her eyes closed, not talking...until she was sure that I had fallen asleep and then sneaked off downstairs to beg Grandma to put some cartoons on for her.

Grandma made her lie down to watch cartoons, though, so she was still resting...I suppose.

Andrew's promised Rachel that she can watch the second Harry Potter movie after we finish The Chamber of Secrets. Both sets of our parents feel that they're equally scary.

In the first movie you have trolls, Snape, Wizard Chess, Devil's Snare, unicorn blood, Fluffy, and a man with a face on the back of his head.

In the second movie you have gigantic spiders, blood, petrification, a giant snake...and I can't remember what all else.

I don't know. It seems to me like the second movie is a little bit scarier than the first (where everything scary happens at the end, really, in a big rush and the rest of it is rather tame). I suppose we'll see how she does as we're reading the story. She's a pretty active listener so chances are if something scares her she'll let me know about it...
Posted by Nancy at 10:36 PM