Miriam loves getting herself dressed. Her outfits may be a little crazy sometimes but at least she usually has clothes on. Rachel was the opposite when she was two and was usually found running around naked instead of running around with three or four dresses on.

A couple of nights ago Miriam was getting herself ready for bed when she confused her pants and shirt. She was very frustrated with how things were going. 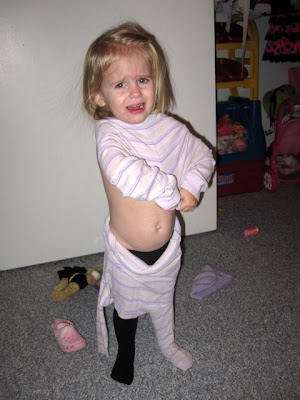 Miriam's got a fantastic memory (which sometimes involves remembering things that I wish she'd forget—like whether or not I promised dessert on any given night). On Saturday when we were driving home from Josie's concert, she whipped out her cell phone to text a friend or something. Josie's old cell phone had died (probably from over-texting or something) and so she's been using David's cell phone (which he left here when he went off to Leeds). Miriam got really concerned and asked Josie, "Why you has Uncle David's cell phone?"

My girls are getting better at playing with each other, which is really nice. Rachel still likes to have "alone time" in her room, which bothers Miriam to no end because Miriam can't open doors yet. She'll stand at the bedroom door and knock and knock and knock while saying, "Is it my room, too, Rachie! Is it my room, too!" Usually Rachel won't let her in and I have to try to convince Miriam to go off and play somewhere else but occasionally Rachel will succumb to guilt (because it is Miriam's room, too) and will let her join in whatever game Rachel is playing.

The other day they were playing blocks but then moved on to some sort of baby game. They made beds on the floor and in the doll crib. 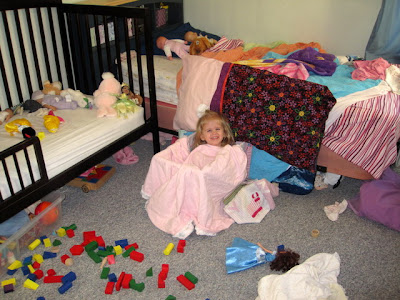 They also started playing with their "WowWee Alive" animals that Grandma got them for Christmas. They're stuffed animals with sensors sewn in so that they can tell when they're being interacted with. Rachel has a white tiger cub that purs when you pet it. Miriam has a koala joey that makes happy koala noises when you pet it.
Miriam was so afraid of her koala when she first got it that she asked me to take it away. It stayed in our room for a while. Rachel was much braver with her tiger and even teased Miriam for being so afraid of a toy—she took her tiger to bed with her on Christmas night just to show how brave she was. But then, about half an hour after they had been put to bed, the girls' bedroom door opened and there was a thud in the hallway.
I went to see what it was—the tiger had been thrown out of the bedroom.
Perhaps it was a little scary, after all. 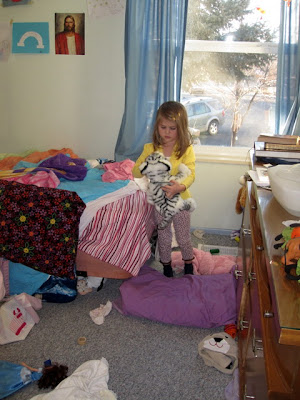 Now, though, they're both used to their animals, more or less, and have even named them. At first Rachel named her tiger Abra (after my sister), but then the tiger meowed and Miriam thought it sounded like the tiger said Maya so Rachel changed the tiger's name to Maya. I then asked Miriam what her koala's name was and she said it was Abra. It's days later now and the names seem to have stuck so I think we'll have Maya and Abra around for a while.
Posted by Nancy at 3:17 PM