This year's Christmas letter is here at last! It took me a while to get in a poetic groove and I was stuck for the longest time with only a couple of stanzas but as you can see I overcame my writer's block and found plenty to say. I'm not even sure why I struggled so much—this year wasn't exactly uneventful.

I'm putting it up on the blog a little late and the last couple verses have become outdated—Andrew's parents arrived last week; we've lost our 70 degree weather and have donned sweaters. We're still just enjoying the holidays and hope you're enjoying yours, too! 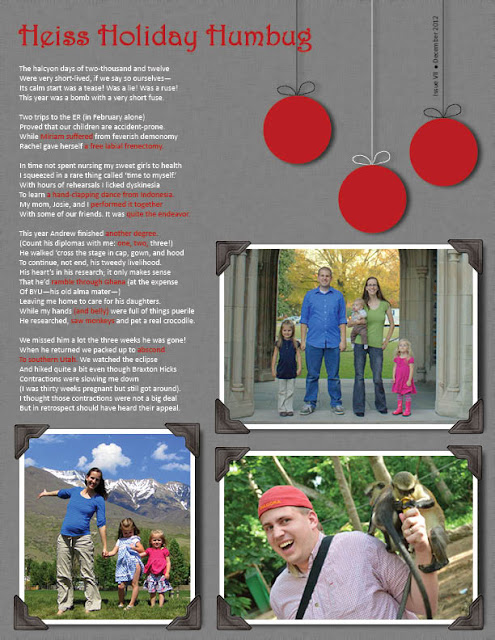 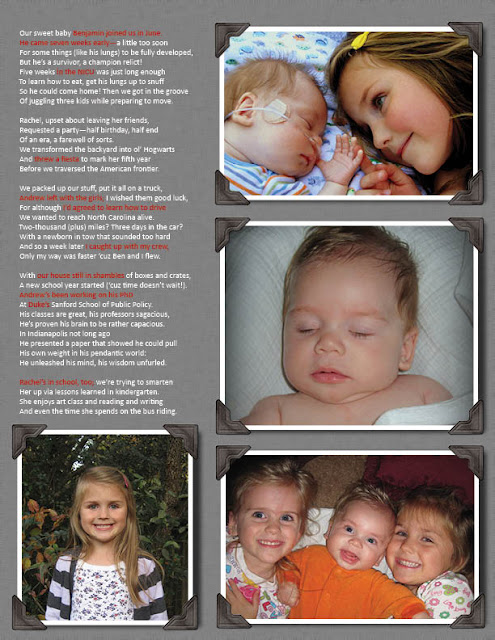 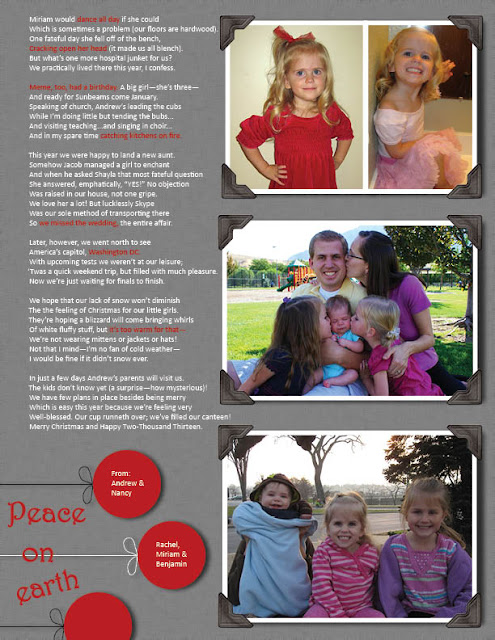 The halcyon days of two-thousand and twelveWere very short-lived, if we say so ourselves—
Its calm start was a tease! Was a lie! Was a ruse!
This year was a bomb with a very short fuse.

Two trips to the ER (in February alone)
Proved that our children are accident-prone.
While Miriam suffered from feverish demonomy
Rachel gave herself a free labial frenectomy.

In time not spent nursing my sweet girls to health
I squeezed in a rare thing called ‘time to myself.’
With hours of rehearsals I licked dyskinesia
To learn a hand-clapping dance from Indonesia.
My mom, Josie, and I performed it together
With some of our friends. It was quite the endeavor.

This year Andrew finished another degree.
(Count his diplomas with me: one, two, three!) He walked ‘cross the stage in cap, gown, and hood
To continue, not end, his tweedy livelihood.
His heart’s in his research; it only makes sense
That he’d ramble through Ghana (at the expense
Of BYU—his old alma mater—)
Leaving me home to care for his daughters.
While my hands (and belly) were full of things puerile
He researched, fed monkeys and pet a real crocodile.

We missed him a lot the three weeks he was gone!
When he returned we packed up to abscond
To southern Utah. We watched the eclipse
And hiked quite a bit even though Braxton Hicks
Contractions were slowing me down
(I was thirty weeks pregnant but still got around).
I thought those contractions were not a big deal
But in retrospect should have heard their appeal.

Our sweet baby Benjamin joined us in June.
He came seven weeks early—a little too soon
For some things (like his lungs) to be fully developed,
But he’s a survivor, a champion relict!
Five weeks in the NICU was just long enough
To learn how to eat, get his lungs up to snuff
So he could come home! Then we got in the groove
Of juggling three kids while preparing to move.

Rachel, upset about leaving her friends,
Requested a party—half birthday, half end
Of an era, a farewell of sorts.
We transformed the backyard into ol’ Hogwarts
And threw a fiesta to mark her fifth year
Before we traversed the American frontier.

We packed up our stuff, put it all on a truck,
Andrew left with the girls; I wished them good luck,
For although I’d agreed to learn how to drive
We wanted to reach North Carolina alive.
Two-thousand (plus) miles? Three days in the car?
With a newborn in tow that sounded too hard
And so a week later I caught up with my crew,
Only my way was faster ‘cuz Ben and I flew.

With our house still in shambles of boxes and crates,
A new school year started (‘cuz time doesn’t wait!).
Andrew’s been working on his PhD
At Duke’s Sanford School of Public Policy.
His classes are great, his professors sagacious,
He’s proven his brain to be rather capacious.
In Indianapolis not long ago
He presented a paper that showed he could pull
His own weight in his pendantic world:
He unleashed his mind, his wisdom unfurled.

Rachel’s in school, too; we’re trying to smarten
Her up via lessons learned in kindergarten.
She enjoys art class and reading and writing
And even the time she spends on the bus riding.

Miriam would dance all day if she could
Which is sometimes a problem (our floors are hardwood).
One fateful day she fell off of the bench,
Cracking open her head (it made us all blench).
But what’s one more hospital junket for us?
We practically lived there this year, I confess.

Meme, too, had a birthday. A big girl—she’s three—
And ready for Sunbeams come January.
Speaking of church, Andrew’s leading the cubs
While I’m doing little but tending the bubs...
And visiting teaching...and singing in choir...
And in my spare time catching kitchens on fire.

This year we were happy to land a new aunt.
Somehow Jacob managed a girl to enchant
And when he asked Shayla that most fateful question
She answered, emphatically, “YES!” No objection
Was raised in our house, not one gripe.
We love her a lot! But lucklessly Skype
Was our sole method of transporting there
So we missed the wedding, the entire affair.

Later, however, we went north to see
America’s capitol, Washington DC.
With upcoming tests we weren’t at our leisure;
‘Twas a quick weekend trip, but filled with much pleasure.
Now we’re just waiting for finals to finish.

We hope that our lack of snow won’t diminish
The the feeling of Christmas for our little girls.
They’re hoping a blizzard will come bringing whirls
Of white fluffy stuff, but it’s too warm for that—
We’re not wearing mittens or jackets or hats!
Not that I mind—I’m no fan of cold weather—I would be fine if it didn’t snow ever.

In just a few days Andrew’s parents will visit us.
The kids don’t know yet (a surprise—how mysterious)!
We have few plans in place besides being merry
Which is easy this year because we’re feeling very
Well-blessed. Our cup runneth over; we’ve filled our canteen!
Merry Christmas and Happy Two-Thousand Thirteen.
Posted by Nancy at 10:49 AM