In the weeks leading up to Thanksgiving, the kindergarten classes in Rachel's school learned about "Indians." Shortly after Thanksgiving (last Friday, actually) they celebrated by putting on a performance for the parents.

They made totem poles and shakers in art class, learned about and decorated their shirt and headbands with pictograms, studied patterns and made noodle necklaces, memorized poems, learned a friendship dance. It was quite the unit. 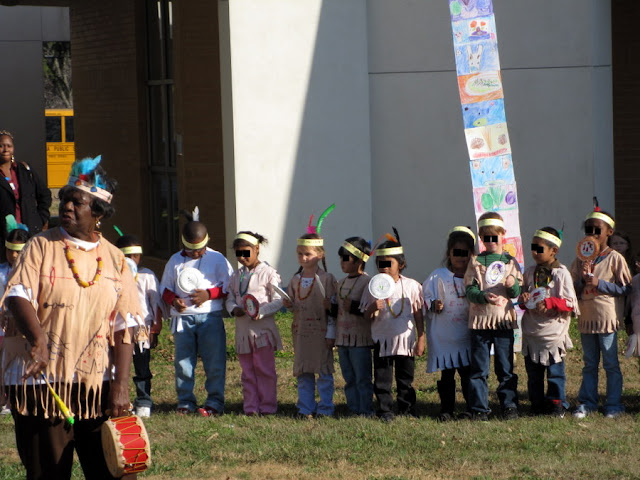 One of the poems was I am a Great Big Indian Chief:

I am a great big Indian Chief
Here is my bow and arrow
Here is my teepee, here is my flute,
And this is the way I sit, just so.

They did actions to the words. 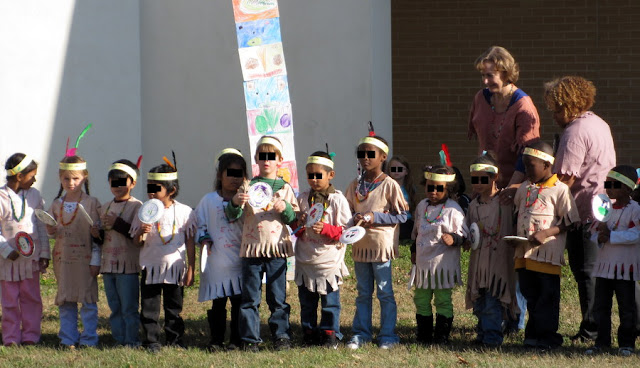 Where we walk to school each day
Indian children used to play—
All about our native land
Where the shops and houses stand.

And the trees were very tall,
And there were no streets at all.
Not a church, not a steeple—
Only woods and Indian people.

Only wigwams on the ground
And at night bears prowling 'round.
What a different word today
Where we live and work and play!

I am not sure I can aptly describe how badly this poem irks me. I think it's wonderful that the children were challenged to memorize a poem. I don't think this was a fantastic choice. It's so...uninformed.

It's chock full of the same kind of stuff found in The Little House series that make me cringe.

Now, to come to the defense of The Little House, I can almost excuse the way in which Native Americans were discussed because it is about white people who, frankly, did not like Native Americans (often referred to as savages) very much. Laura found them fascinating. Ma found them horrifying. Pa seemed to be almost respectful of (some of) them. Laura's discussions of Native Americans, however filled with prejudice/disrespect/curiosity, preserves on paper the attitudes Americans back then held of Native Americans.

Wynne's book of poems, which included the title Indian Children, was published in 1919. It also preserves on paper the prejudice/disrespect/curiosity "Americans" held for "Indians" but is supposed to be about Indian Children—instead it is about white children. When we would read about Laura's encounters with Indians in The Little House there was plenty of room for discussion—Rachel was full of questions about why anybody would treat/talk about someone the way the Ingalls family treated/talked about Indians—this poem invoked little thought from Rachel. It was just some poem she learned. But why?! There have got to be better stanzas out there to fill our children's minds with...

I found a review of the poem by Debbie Reese, a Nambe Pueblo woman who helped found the Native American Studies program at the University of Illinois. I must say that I agree with most of what she says. I only wish that she had suggested an equally simple, child-charming poem to teach our children in school. I mean, she offers a poem describing Columbus and others as murderers and robbers (which, if we're being honest...they kind of were) but I'm not sure I really want my kindergartener chanting about "a dozen filthy murderers" either. I'm not sure that those men meant for things to turn out quite the way they did. But maybe they did. I don't know. I'm so torn...

Our family tree is full of interesting dichotomies: on Andrew's side we have both Nazi and Jew; on my side we have both Pilgrim and Indian. Most of what we're taught, though, is a carefully selected narrative, lauding "our" side and demonizing "others."

...Not that I can think of one redeeming trait of Nazis...other than that I don't think every Nazi soldier wanted to exterminate Jews. Just as the Duke family was against succeeding from the Union, yet fought with the Confederates, so too do I think that there were decent Germans/Nazis who just happened to feel obligated to fulfill a social contract with their government (eg. a draft). I also don't think that every white man through history was bent on destroying "savages."

(Did I just invalidate my whole point by virtue of invoking Godwin's Law? I don't mean this discussion to be hyperbolic at all.)

Mistakes—huge mistakes that aren't even remotely excusable and alter the course of history for entire groups of people—happen.

So while I don't think we should start ameliorating the Nazi party, I also don't think that we should give Israel a sympathetic look when they've built a wall around Palestine. I also don't think we should begin teaching our children that Columbus and others as nothing more than a blood-thirsty, treasure-hunting, land-taking men. The Pilgrims, after all, had good intentions—they wanted freedom from oppression...they didn't necessarily mean to oppress others (even though that's what ended up happening).

I do, however, think that there could be more fair ground in the discussion of our history. Rachel's Pow-wow was fun—there are a lot of traditions from various Native American tribes that are fun—I just wish she could have actually learned something...specific. 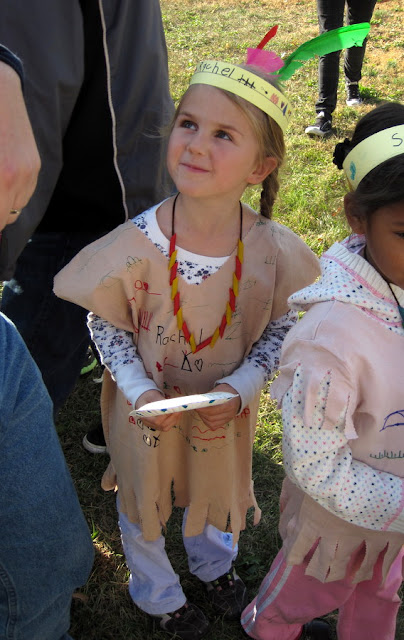 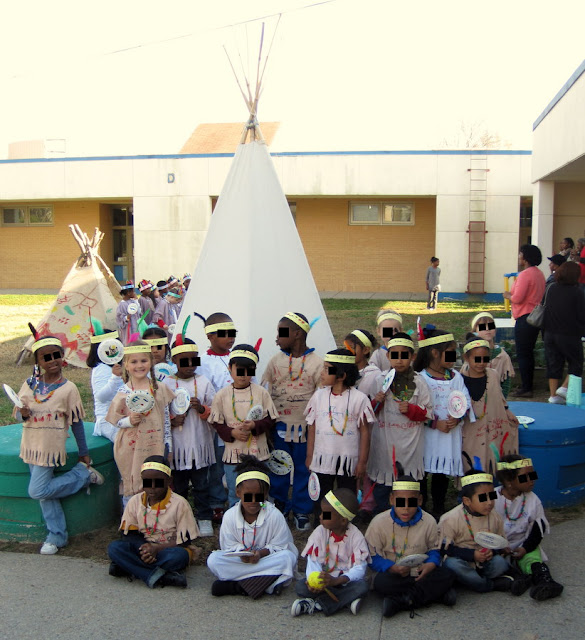 That said, the pow-wow was supposed to be fun, which it was, though I do wish they could have found a hoop dancer to come...that would have been awesome. 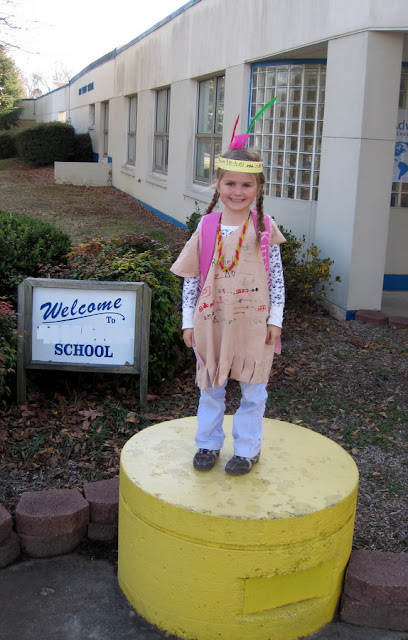 We left for our trip right after the pow-wow, leaving North Carolina and heading up to Virginia—passing on our way the Pocahontas State Park, which might be fun to visit some day. There's also a whole trail devoted to John Smith, which would also be interesting to explore. 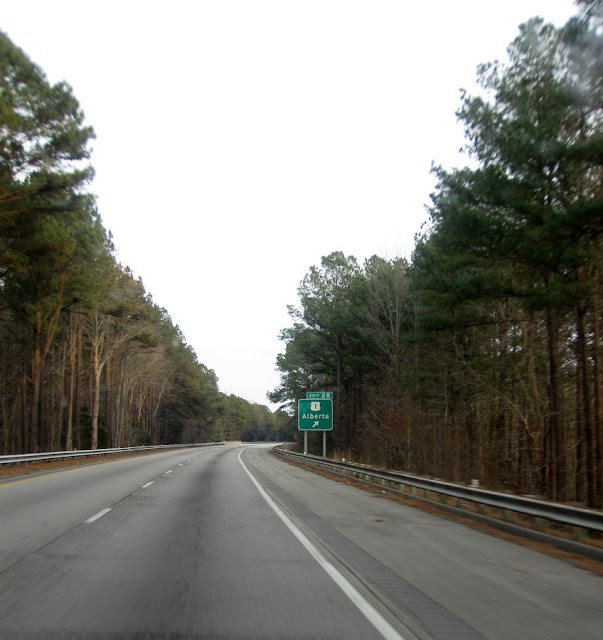 It was shocking to realize that we live so close to where the Virginia Company landed (in 1607) and founded Jamestown.

"There is so much history out here!" Andrew exclaimed as we passed a sign pointing out some historic place. "It's so much older than the west."

"They're actually about the same age," I pointed out.

And I do. He likes American history. A lot. Which is one of the reasons he was so excited to take this trip in the first place.

Rachel was upset about having to do homework one day (yuppers—in kindergarten; I'm totally looking forward to the next twelve years) and in exasperation shouted, "I wish I were an Indian child because then I wouldn't have to learn anything! Indian children didn't go to school so they didn't have homework either!"

"Oh, Indian children might not have had to go to school but they had to learn things," I told her.

We're of course talking about the same Indian children Laura Ingalls Wilder and Annette Wynne were talking about—the ones from long ago that no one ever sought to  understand and whose collective culture we now perpetuate without bothering to differentiate between tribal customs or regions or language or anything. That's why we were using past tense, I'm sure.

"Well, surely they had to learn their own history and customs. They had to know how to build things, like houses and canoes. They had to plant gardens and hunt. They had to cook and sew. They learned lots of things and they had a lot of responsibility so it wasn't as if they were just playing or watching television all day," I said.

"Oh, and they had to learn how to make fire!" Rachel added. "Indians didn't have matches, you know, so they had to make fire by rubbing two sticks together. We did it at school."

"You started a fire at school?" I asked.

"You made a fire in your teepee?" I asked, amazed that this would be an approved project for five-year-olds.

"Yes! We rubbed sticks together and made fires in our teepee—Stacy and I did, anyway. We were the only ones."

"We just rubbed two sticks and that's how we got fire. It wasn't very hard."

"Well, I'm still impressed. I've never been able to do that."

"You can, Mom," Rachel assured me. "Just pretend."

Turns out she'd only made a pretend fire, herself.
Posted by Nancy at 12:23 PM