Snippets from our time with Amanda

Another reason we chose this past weekend to visit the DC area was to attend our friend Amanda's wedding (p)reception. She brought a boy home to Utah this past summer and we were lucky enough to meet him. I saw her sister a little while later and asked if this trip was the trip—the "meet the family" trip. Emily told me that it most certainly was a trip like that and hinted that a special panda-shaped box had been covertly delivered into Blake's hands so that he could put something sparkly inside to give to Amanda, who has a thing for pandas.

So I wasn't too surprised to hear a little while later that Amanda and Blake were officially engaged.

We stayed at their apartment, where Amanda is living solo until their wedding later this month, while we were in Virginia. Their (p)reception was on Friday, which is why we had to rush to hit the road after Rachel's pow-wow. We arrived just in time for it to start and were pleasantly surprised with how many little friends there for the girls to play with. It was at Amand's bishop's house; he's a former congressman (and Andrew was rather excited about that).

Amanda and Blake's reception was really fun. I was impressed that they planned and put on the whole thing by themselves and it turned out great. I'm sure they're happy to have family helping out with their other receptions—in Utah and Arizona—later this month!

They had a little barbeque upstairs and had games to play downstairs, which is where most of the little kids were hanging out.

Rachel had insisted on wearing her pow-wow garb to the party which I almost felt a little embarrassed about since the reception was in such a fancy home. Downstairs she found a little firefighter to play air hockey with, though, so I stopped feeling embarrassed and felt awesome instead. She was rocking her end of the air hockey table in her fringed pillowcase dress and beaded necklace (we left the headdress in the van); he was trying to best her in his rubber boots and plastic firefighter coat. Andrew saw them and said, "What is this—The Village People?"

I'm not sure the Village People ever had a firefighter costume but it was still a funny joke that our kids aren't cool enough to appreciate yet.

When Amanda came to stay with us in Egypt she told us about a Tauntaun sleeping bag she'd won online. When we came to stay with her in DC she pulled it out for Rachel to sleep in. Originally she suggested the girls could take turns sleeping in it but when Miriam saw it she didn't want to sleep in it, or share a bed with it, or even be in the same room as it. We convinced her to stay in the room, though she made a "princess bed" on the floor even though the futon was plenty big enough for the girls to share. That Tauntaun was too scary for her.

That made Rachel happy because it meant she got to sleep in it every night! 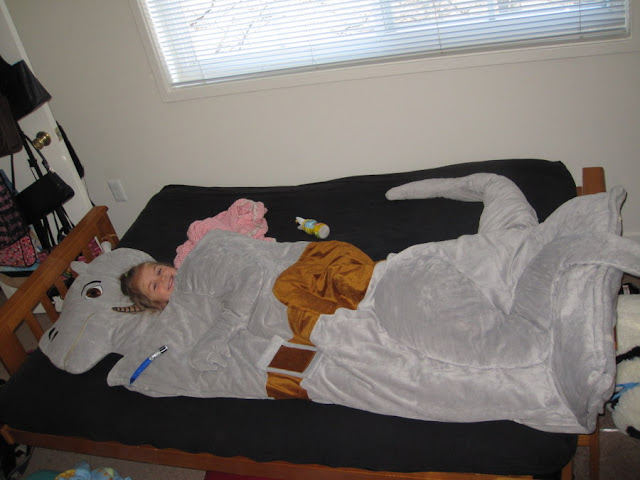 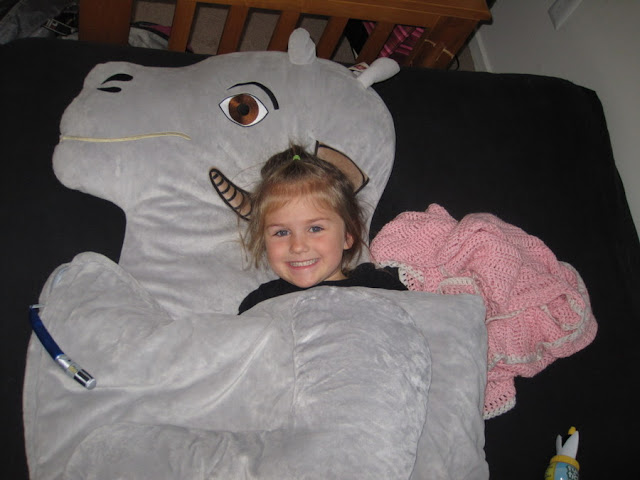 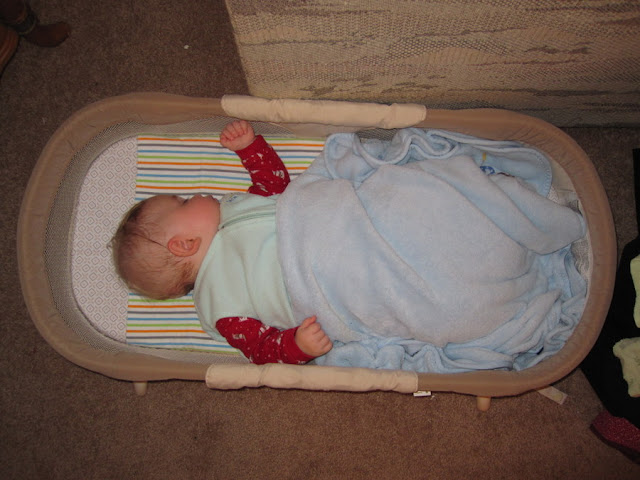 On Sunday night when we got back from Elizabeth's, Blake and Amanda were ready to set up their Christmas tree. They'd waited for us to get back so that the girls could help. 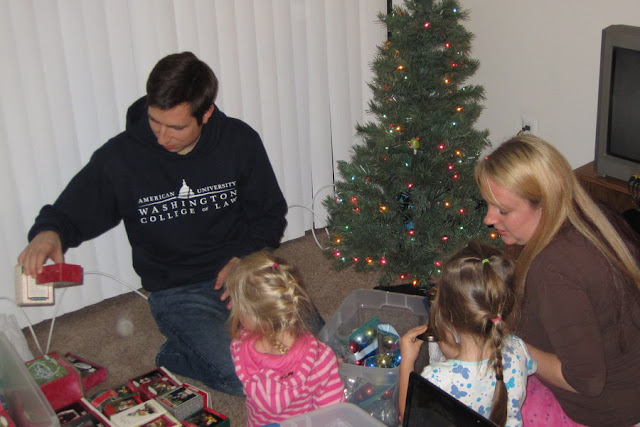 Benjamin and I watched from the background. Benjamin is really starting to enjoy his feet... 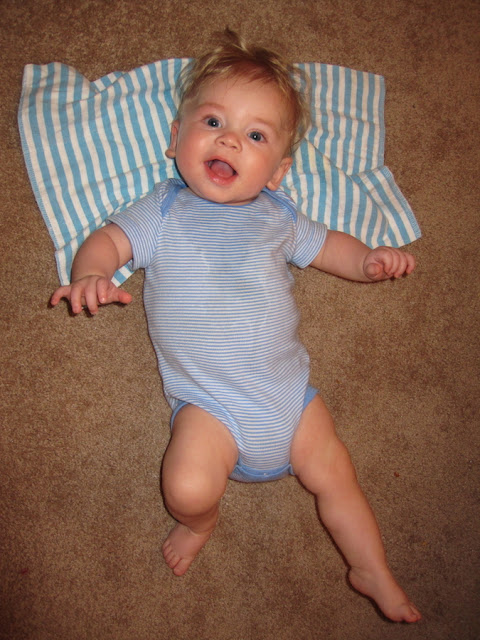 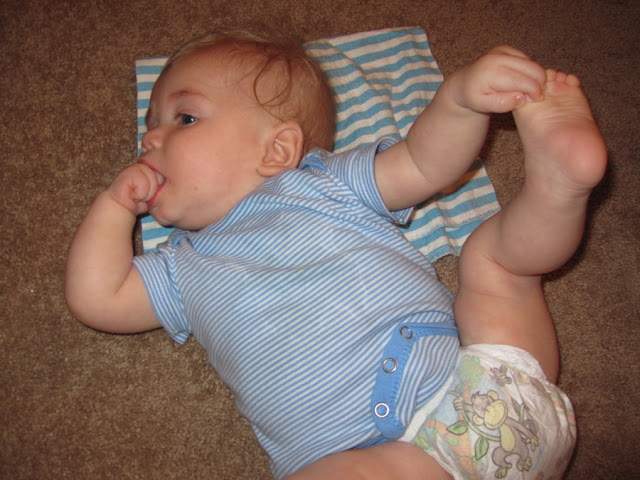 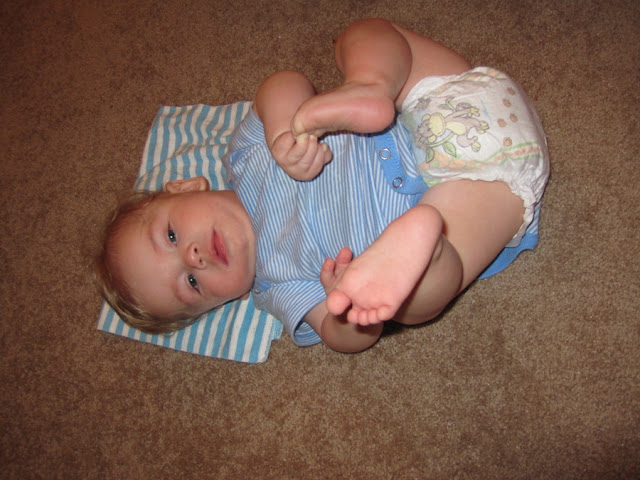 Amanda told the girls they could also set up her magnet nativity on her fridge. This caused a bit of a fight between the girls...but they got over it...mostly. 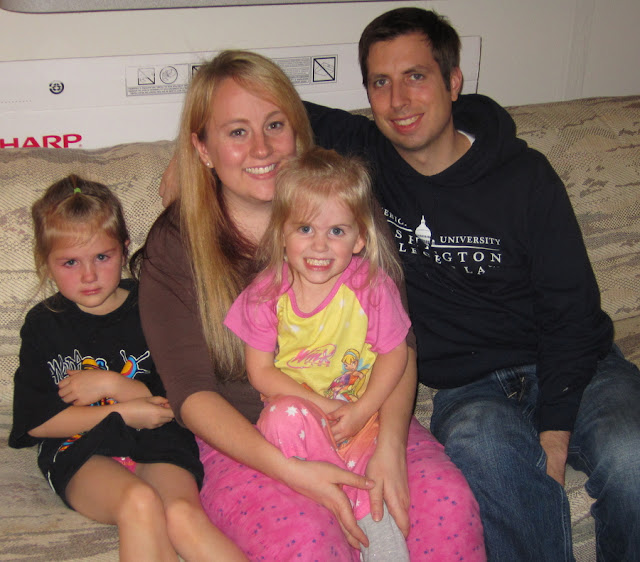 They made pancakes for us on Saturday morning and Amanda flipped one into the little crack between her counter and oven—we all thought that was rather impressive.

Miriam blessed the food for us and while she was praying said that she was thankful for "Amanda and Lake," which was cute. It made me think of when she said family prayer last week when we had some friends over and begged "Please bless that the Farnses will love us!"

It was so fun to stay with you, Amanda! Thank you!
Posted by Nancy at 9:50 PM