After dinner and homework and chores I turned on some Valentine's Day tunes (not really because I don't think those actually exist...but it was some random "CD" on Spotify called A Kid's Valentine's Day Party or something like that and had a bunch of old love songs sung by kids) and we had an impromptu dance party in the living room. I will never be able to listen to Hooked on a Feeling with a straight face, thanks to a mime routine my friend Leslie did in one of our theatre classes in high school.

When we were finished dancing around like lunatics, we settled down to play Don't Eat Pete! The girls caught onto the rules of the game quickly and loved it. The first couple of rounds were a little crazy because Rachel cleared the board twice in a row without getting Pete while Miriam picked Pete on her first guess twice in a row. It was a crazy! 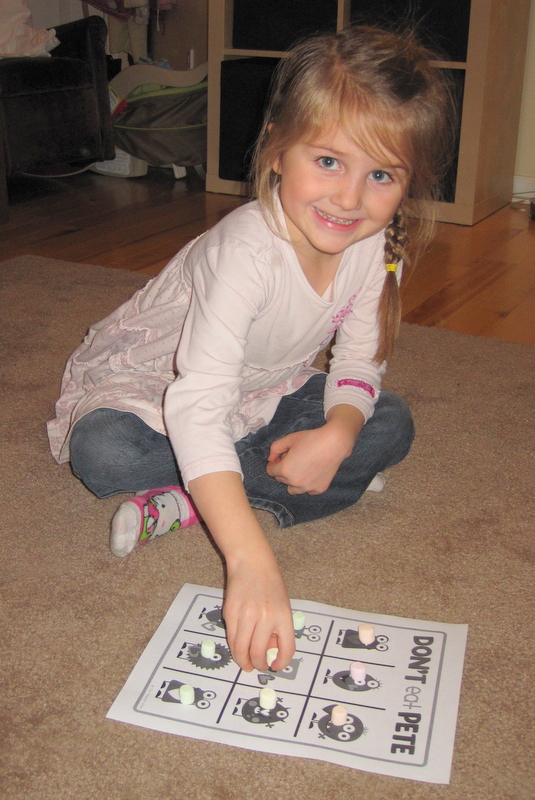 She was upset that she didn't get to eat any marshmallows so I granted her an extra turn after the second time she didn't get any, which Rachel said was unfair until I pointed out that Rachel had gotten to eat eighteen marshmallows (we let her eat Pete for so handily saving him until last) while Miriam had eaten zero. 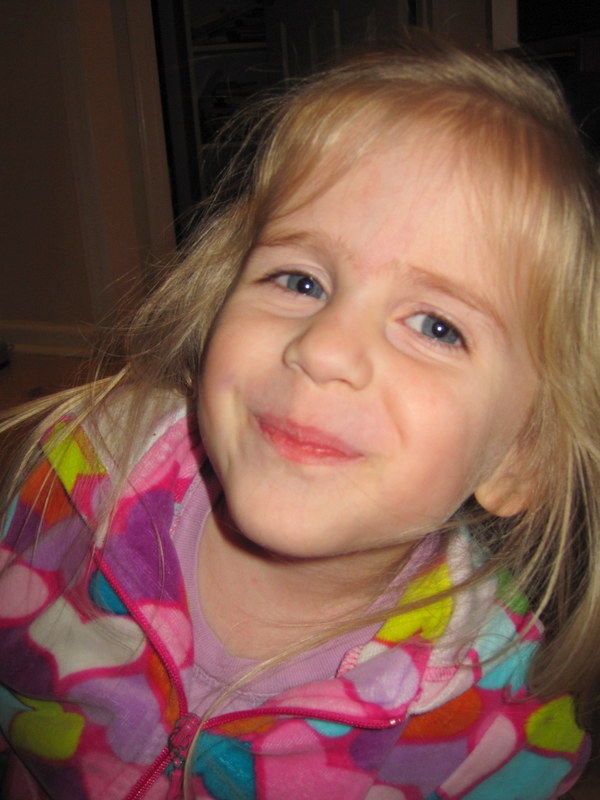 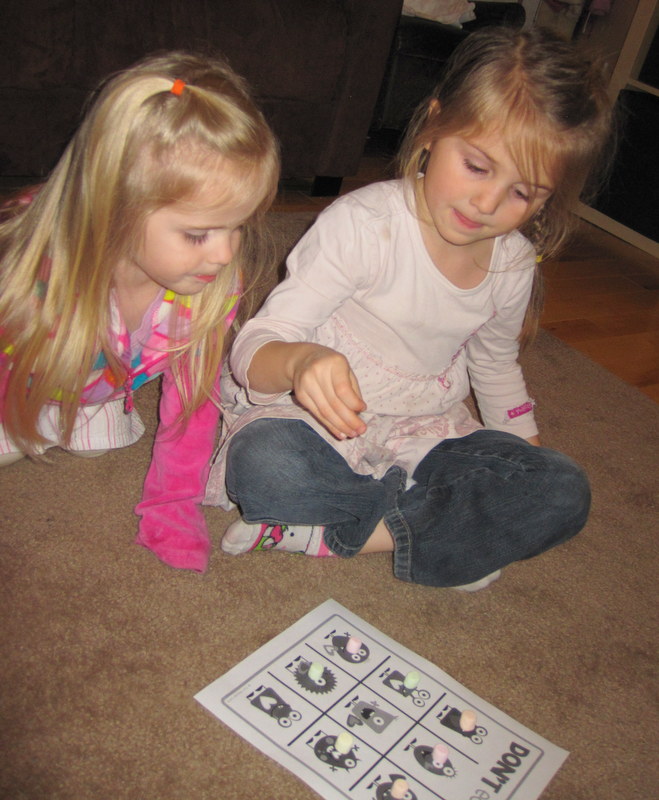 They were quite enthusiastic about letting each other know when Pete was coming up. Miriam would recoil and cower every time Rachel and I yelled, "Don't Eat Pete!" though she toughened up by the end of the evening. 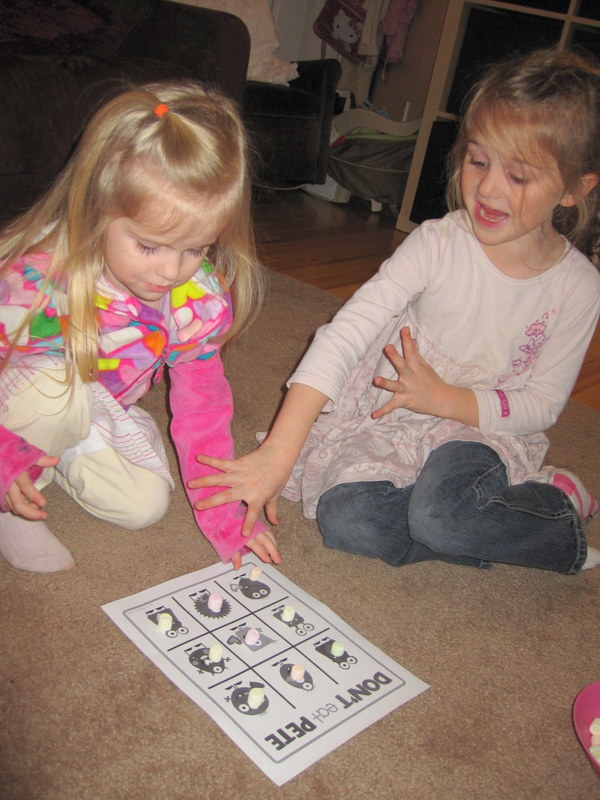 I also took my turn in rotation, which started out fine until the girls decided that they wanted to have more turns themselves and worked out a plan that Pete would be whichever valentine alien I chose first. 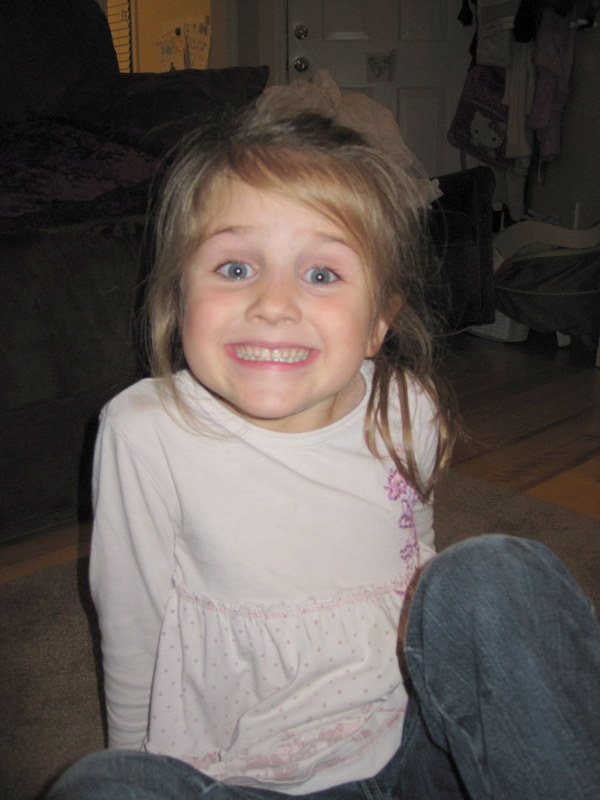 You sneaky kids! Next time we play I'll use raisins or something and see how they like that! 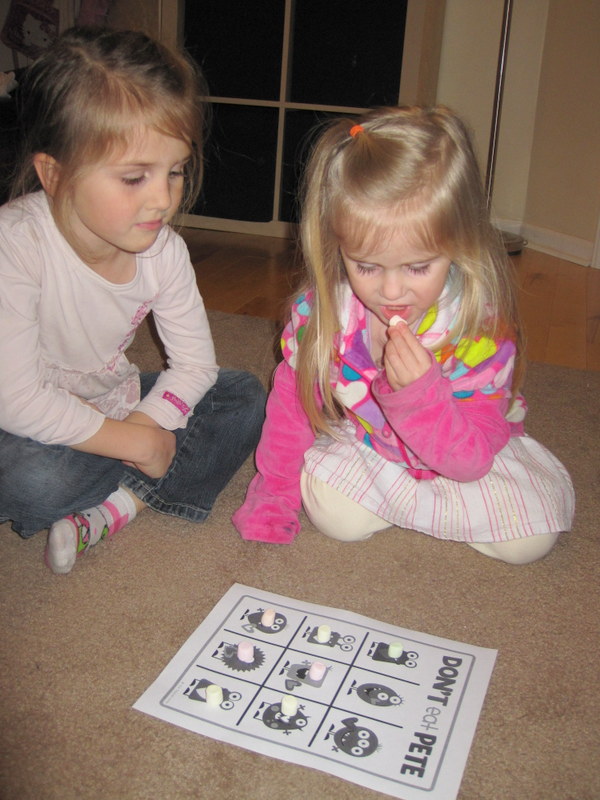 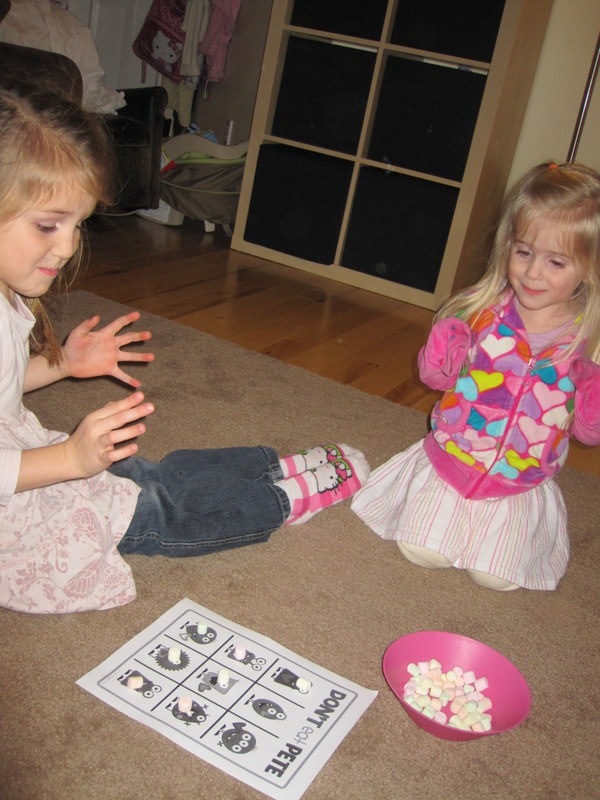 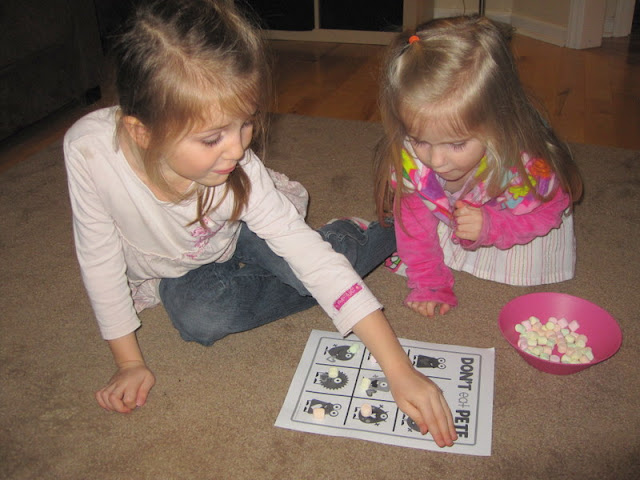 Benjamin enjoyed watching both the dancing and the Pete-playing. 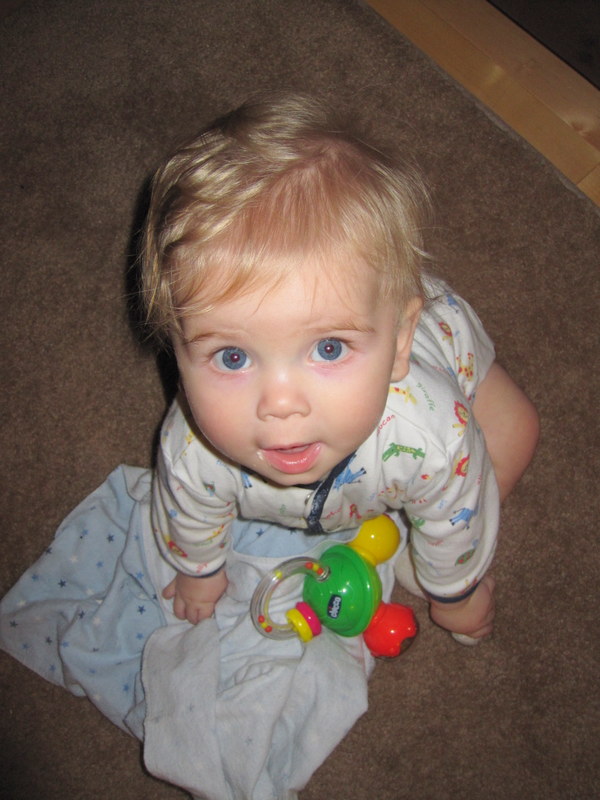 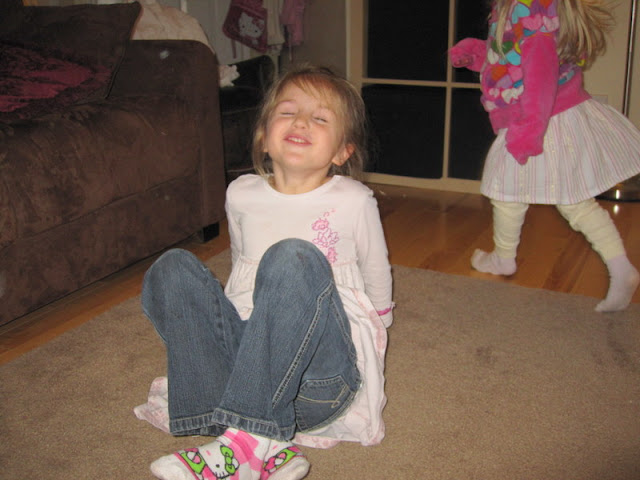 It was a fun night and the girls didn't want to stop but, alas, the bowl of marshmallows eventually ran out and I refused to fill it up again so when the last marshmallow was gone it was time to get ready for bed. 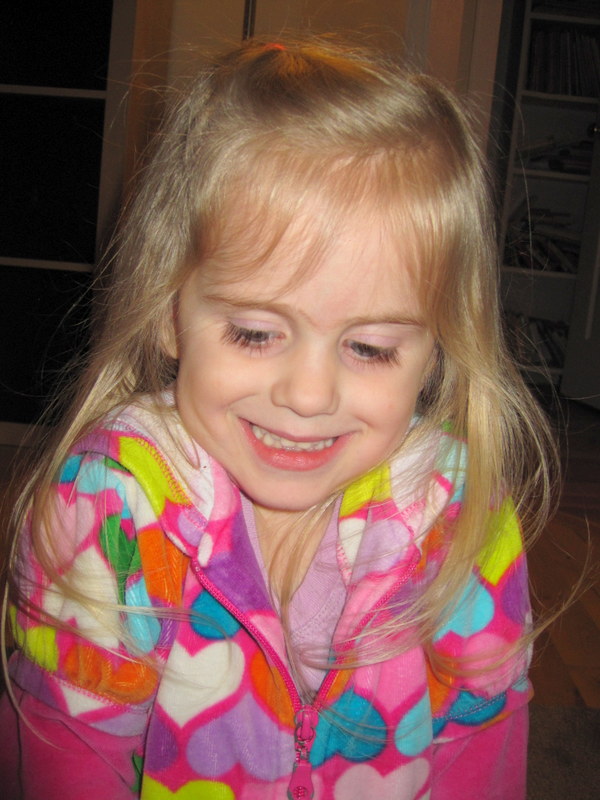 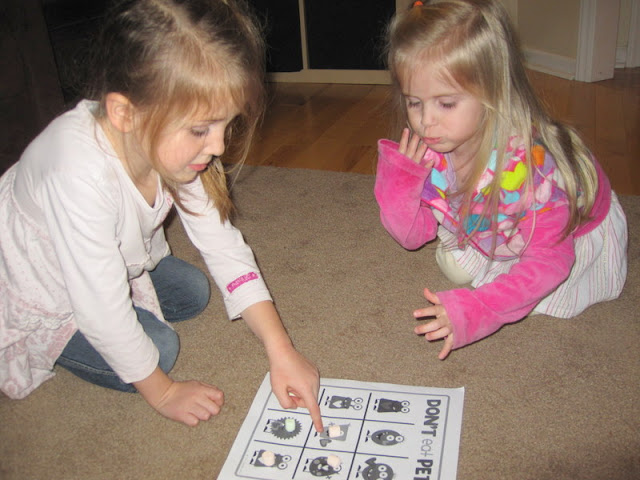 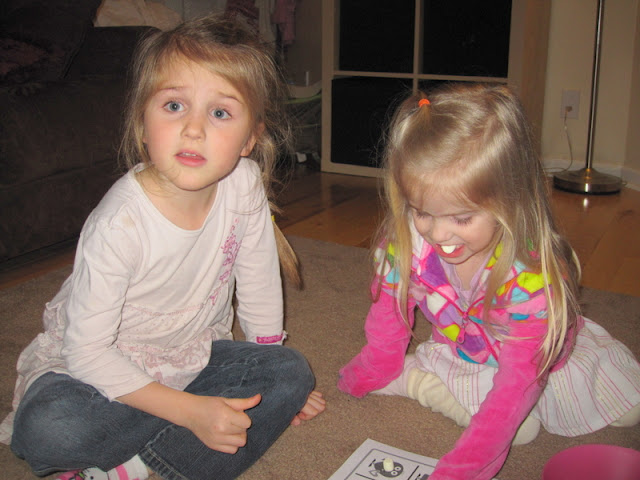 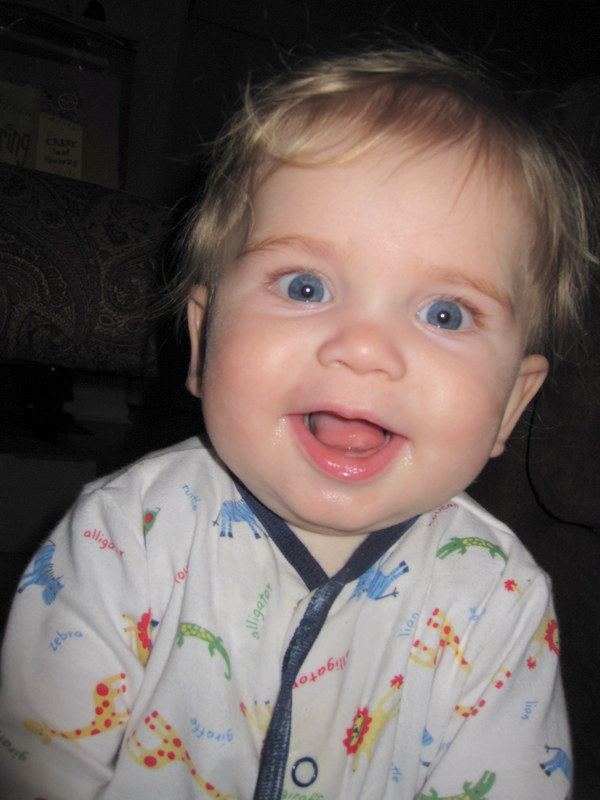 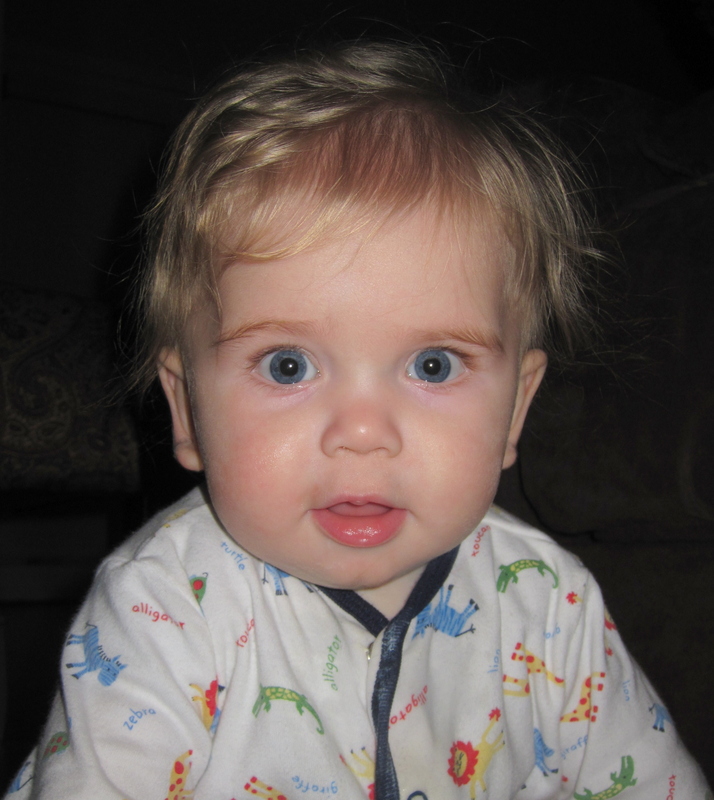 Rachel chose to write about Don't Eat Pete in her journal before she went to bed:

Sumbotey hawof to go awot of the room then the peapl that are in the room tha get to choos wich is Pet. Then we haf to poot kand on the gise. Then we coll that prsin. Wen tha pic Pet we say Don't aet Pet!

Do you love that game or no? I love it. Do you?

Here's the translation, in case you need it:

Somebody has to go out of the room, then—the people that are in the room—they get to choose which is Pete. Then we have to put candy on the guys. Then we call that person. When they pick Pete we say, "Don't eat Pete!"

Do you love that game or no? I love it. Do you? [You probably didn't need me to translate that bit.]

I have to go to bed now.

She's getting more and more prolific. It's awesome.

Yesterday Andrew put the kids to bed while I went to a primary meeting (with Benjamin) and Rachel had stayed up late writing in her journal. I flipped it open to the last page and saw a sequence like this:

And I thought, "Holy smokes! She wrote that many numbers!" Hello, ten thousand and sixty seven!

But then I got to the end and it just said "200" so I flipped back a page and sure enough, she'd written from 1 to 100 perfectly and then wanted to continue but wasn't really sure how so she just tacked the numbers on after writing 100.

So during dinner tonight we talked about 100s, 10s, and 1s and how they work and I think she kind of got it by the end. Maybe. We practiced writing numbers in columns—I'd tell her a number like 764 and she'd have to write 7 in the hundreds column, 6 in the tens column, and 4 in the ones column. She did fine with that exercise but once I took away the columns she only wrote down triple-digit numbers correctly about 50% of the time.

We also finished reading These Happy Golden Years tonight, which was perfect timing with it being Valentine's Day Eve and the book ending with *SPOILER ALERT* the marriage of Laura to Almonzo. It made me feel a little sad that we just watched Laura grow up from a four-year-old girl to a young married woman in such a short time. It made me feel like my life's going equally fast!

I guess the book made me think back to our time as a young, engaged couple (oh, so many years ago, according to our children) and how much Andrew and I have grown up since then, how much we've done, how many miles we've travelled, how much life we've lived. We started the series with Rachel and Laura both being only four years old. Rachel's five (and a half) now, but Laura is eighteen! She grew up with every turn of the page! I look back at my four-year-old self and it doesn't seem that far away. I got engaged/married when I was twenty and that seems not so long ago and a lifetime ago at the same time. I can picture Rachel growing up from four to eighteen in a flash—that's all it is in my memory, a flash, and that's all the Little House series was, too!

Call them back as they go by,
Sweet their memories are,
Oh, improve them as they fly,
These happy golden years.

I love the part where Ma gives Laura a red-checked table cloth, just like the one Ma always kept on the table growing up, so that Laura could have something to make her new home feel more homelike. And I love that Almonzo had it on the table when she saw the house for the first time.

Andrew and I both tend to like silly things from our growing-up homes—be they material things or ways of doing things or whatever. Particularly in the kitchen, we tend to gravitate toward choosing items that are similar to whatever our parents have in their kitchens. After spending two years living in Andrew's growing-up home there are some more things I've adopted from his mother, too—like plastic mixing spoons! I don't know how I survived a quarter of a century without them! But they're awesome.

So though these happy golden years of ours are "fleeting swiftly on" and the children are growing at far too rapid a rate and we find ourselves getting old (we're creeping on thirty over here, which is so old—okay, it's not, but I can see us growing old together (slowly but surely)) I suppose we can just be grateful that our years are both happy and golden. I'm so blessed to be married to my best friend—a grand adventurer and impressive scholar who treats me like nobility—and that we have the sweetest, most beautiful children (even if they never sleep and scream 95% of the time). I'm so happy they're all mine for all of eternity.

And that's the end of my mushy-gushy diatribe (the archaic definition of that word, naturally).

What did you expect? It's Valentine's Day!
Posted by Nancy at 12:38 AM