Miriam enjoys lounging about in the mornings. She'll get up and eat breakfast with her sister at seven and will still be in her jammies at noon if I don't put any pressure on her. She loves to snuggle in bed—or in the rocking chair...or on the couch—and tends to migrate toward the warmest/softest body available.

Yesterday morning Benjamin won out over me as softest. Miriam lay down on the floor next to him and stroked his cheek and twiddled his ear while he more or less ignored her and chewed on his toy. 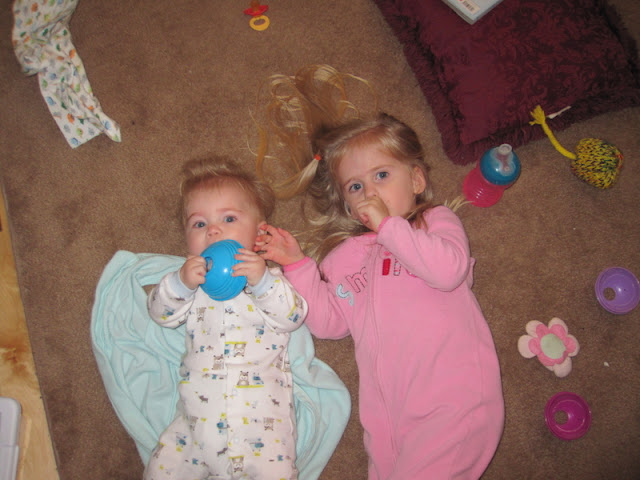 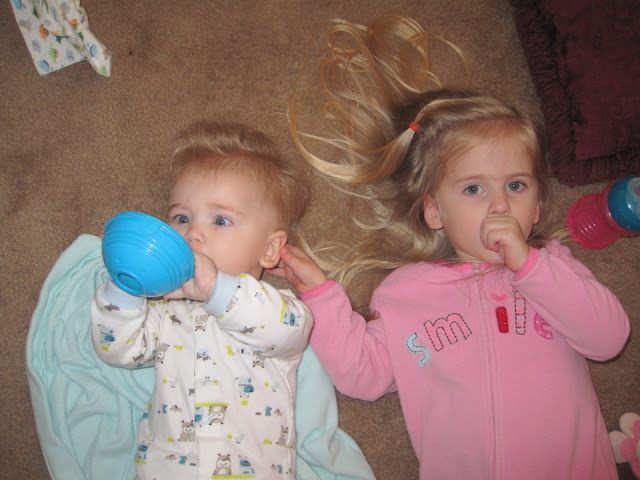 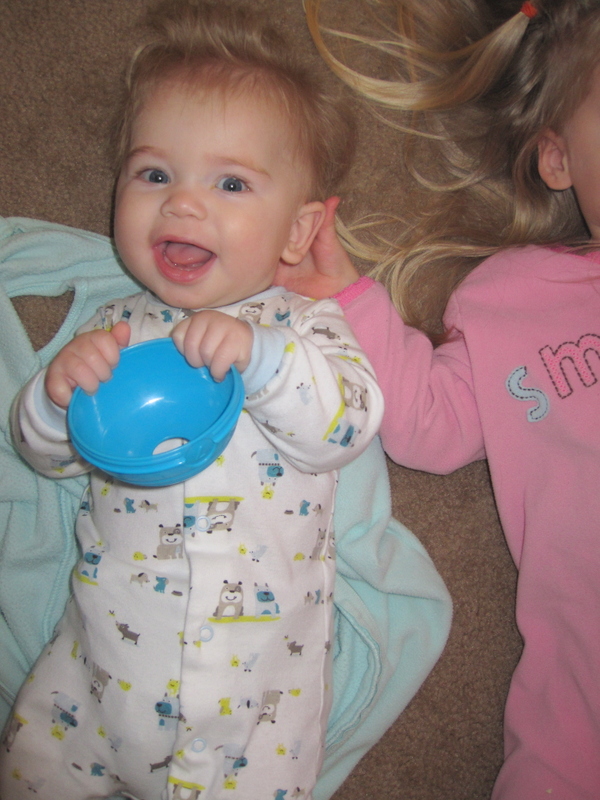 We did eventually get dressed (I believe Miriam won—she got dressed three or four times) and after doing a few things around the house got ready to go to the park. Benjamin's getting more and more mobile—here he is checking the printer to see if anyone forgot to pick up a job they'd submitted. And he was in luck because someone (me) had! He loves to chew on paper. 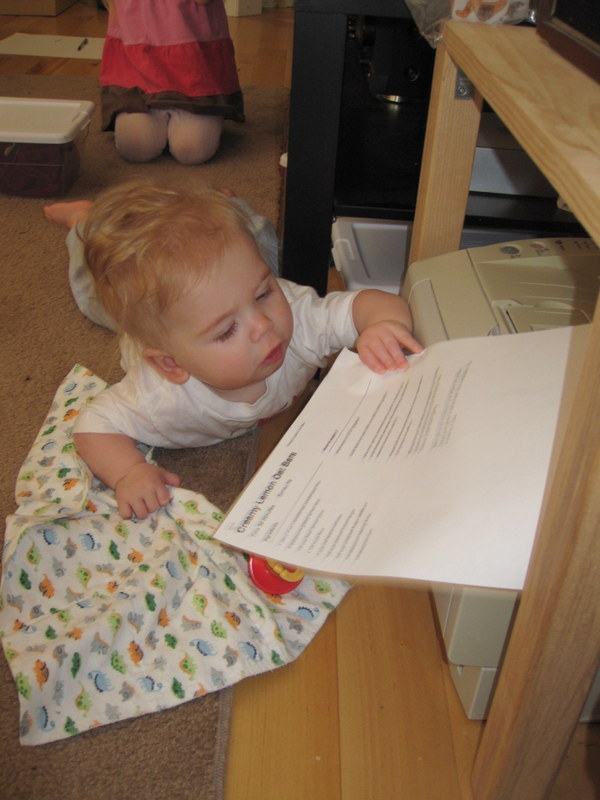 The park was lovely, as usual. I actually like it more right now than I did in the summer when there were spiders everywhere... There were a couple of kids there that we'd seen before so we kind of knew them but kind of didn't. I encouraged Miriam to play with them but she can be pretty shy so mostly all the kids ended up hanging out around me and Benjamin.

That's all fine and dandy but it's also a little awkward. I don't know what kind of person their parent (though I think the person with them is their uncle because they kept calling him that) is but I'm always a little shy of interacting with new parents at the playground because of posts like this: Please Don't Help My Kids. And I understand that kind of parenting technique, I suppose, but I still help my children do things at the playground. I still push Miriam in the swing. I still will spot Rachel when she tries tricky things. And they've still had their fair share of bonks and bruises.

Once I put one of my kids in a swing every other child at the playground wants a turn, too, and I find it awkward when little strangers are pressuring me to help them while their caregivers stand idly by.

And their accompanying adult just sit there? What's that about?

I've helped random kids on the swing before and sometimes parents are okay with it but other times they haven't been. I've actually been told by parents that they want their child to learn to do things on their own. And that's wonderful but your child is, like, two years old. What am I supposed to do? Tell them to bug off? How about you at least take responsibility for telling your child to quit pestering other adults for attention if you really aren't a lazy parent and simply want your child to learn to do things for themselves.

I guess I feel the same way about proving my children opportunities to do things on their own as I do about the chances of hand sanitizer ruining our immune systems. I mean...I might occasionally whip out the hand sanitizer (after on-the-go diaper changes, for example) and we used it religiously when we first brought Benjamin home from the hospital (on the advice of our doctors) but I'm fairly confident that our home environment is not sterile enough to worry about occasional hand sanitizing decreasing our overall immunity. I mean, you've seen our house, right?

In the same vein, I do try to prevent bodily harm from befalling my children. They hurt themselves frequently enough just walking down the hallway that, yes, I am willing to walk beside them when they're trying to balance on the curb. And, yes, when they're stuck in a tree with their leg twisted at an awkward angle I do what I can to help them down without them snapping their ankle.

They're still covered in scrapes and bruises from head to toe and are surrounded by germs, I promise.

I also believe children should explore the world on their own, which is why I introduced my son to a new friend and left him alone. Benjamin, meet Wood Chips... 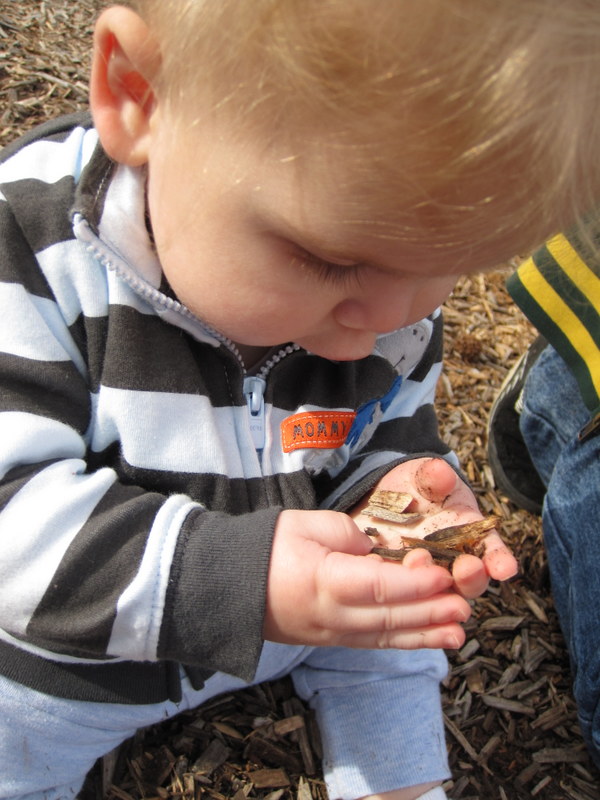 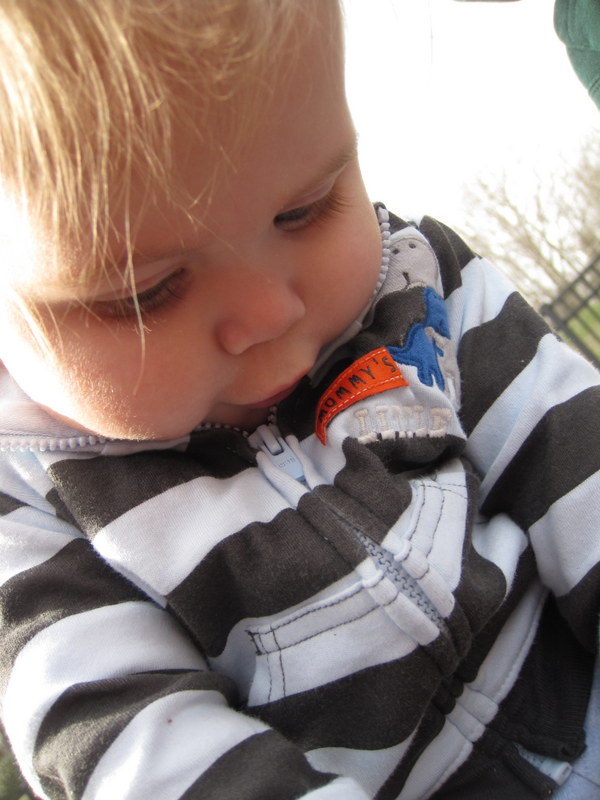 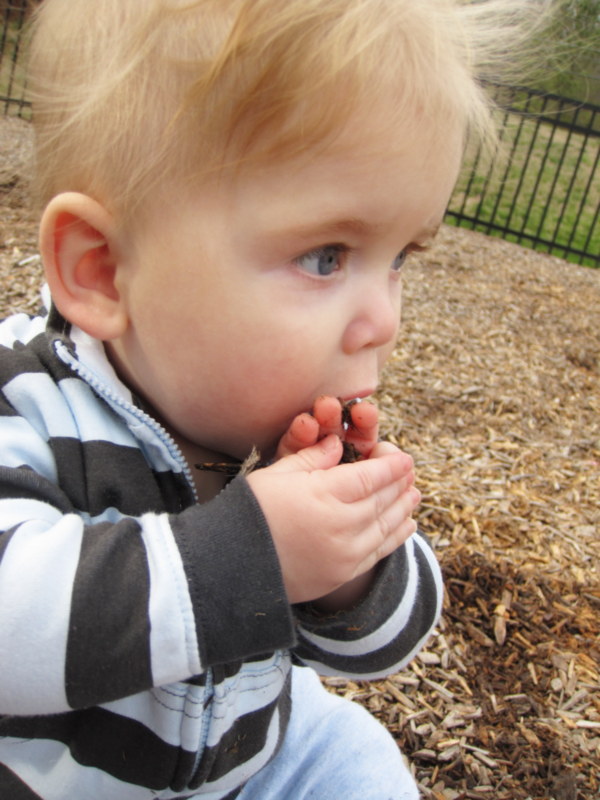 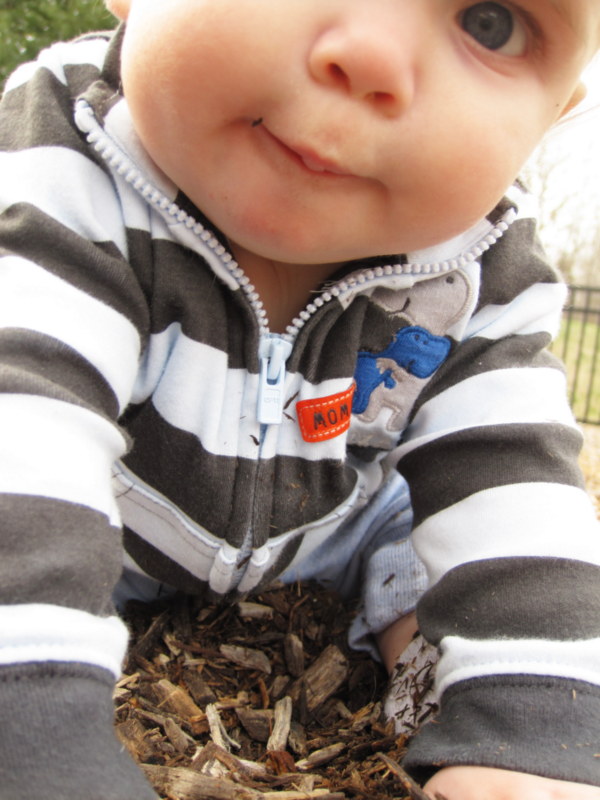 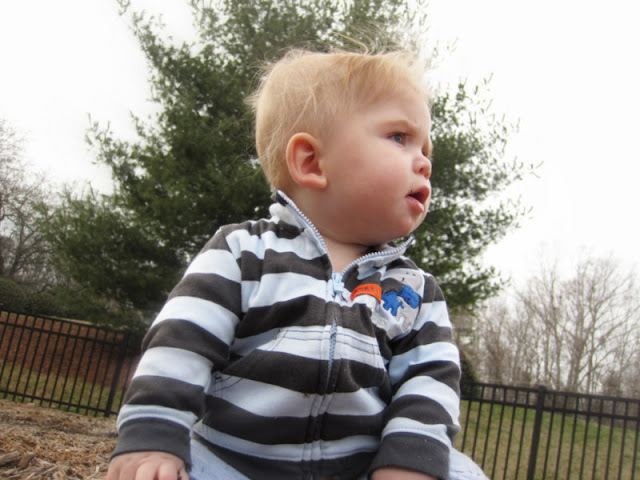 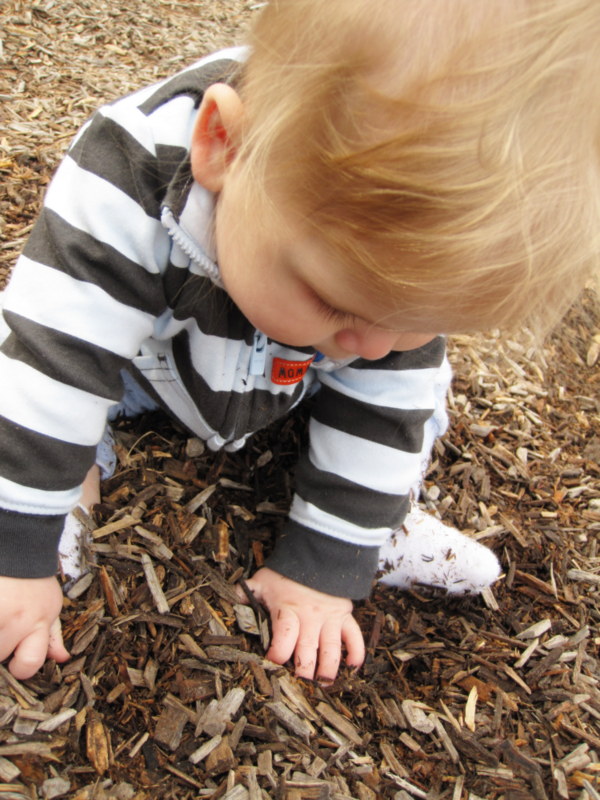 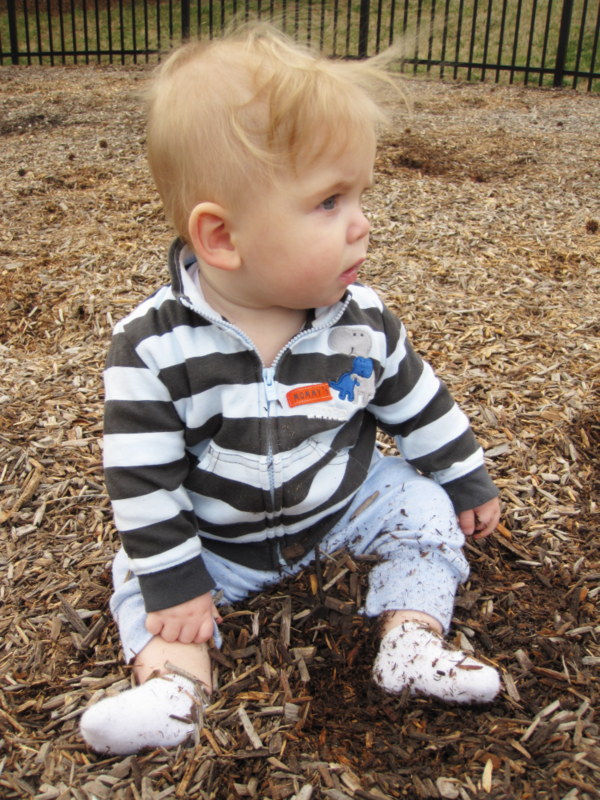 By this time Miriam's little friend Claire had arrived and the two of them were off playing together (and trying to lug Claire's baby doll stroller up and down the playground equipment). Those two girls are so cute together; I'm said Claire's family won't be around for longer.

Sadly, the sun went behind the clouds and things got a little chilly and Miriam & Claire got all played out so we went home. I finally found the bike pump and was able to inflate the tires on our jogging stroller (which travels over the grass much easier than our other stroller). We haven't used it in so long that Miriam didn't even remember it, which was nice because I thought that she might want "her" seat back but she was totally fine sitting in Rachel's spot while Benjamin got her old spot (complete with the baby toy that's been on there for a full two years). 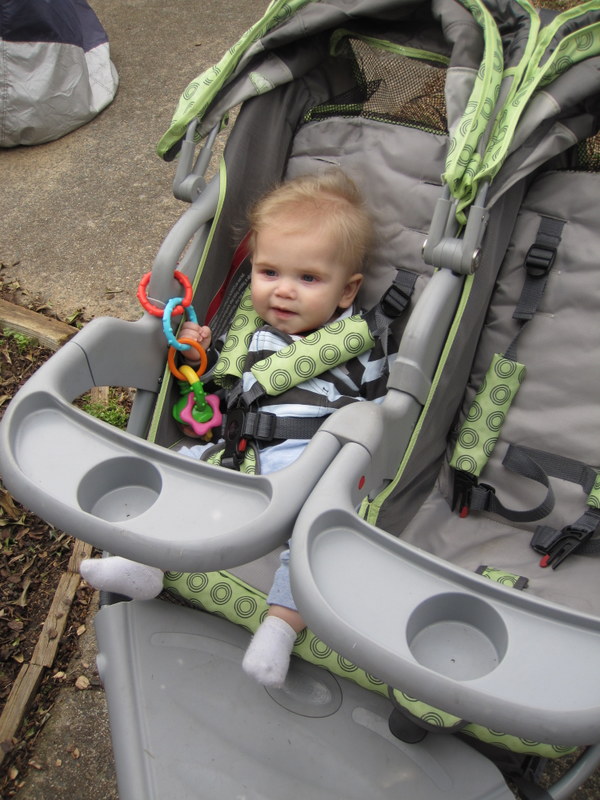 We can't exactly call it the "two girl stroller" anymore, so I guess we'll have to get used to calling it the "double stroller" or perhaps just "the jogger." It's kind of strange to change its name after so long—I'm sure I will always think of it as the Two Girl Stroller. A stroller by any other name is still as sweet, so it's nice to have it up and running again (no pun intended (seriously—I noticed that one after I typed it)) whatever we happen to end up calling it!
Posted by Nancy at 11:15 PM