Strength of a small tornado

Showing much restraint we only spent two hours at the pool this morning. Rachel had her lessons with me while the Alder children had their lessons with Clarissa (and Daddy watched Miriam and Benjamin).

Rachel made fabulous progress—she can now float (though probably not to save her life since she still occasionally thinks she’s drowning in the shallow end). I think we’ll be making fairly steady progress through the summer; she’s so motivated that she even noted that we can continue our lessons in Florida since there’ll be a pool at the hotel.

Miriam has been making progress as well. She climbed into the deep-end and scuttled along the wall (with Andrew near by, of course) and walked tiptoe along the shallow-end wall and practiced blowing bubbles all on her own accord. I think that will count for her lesson today.

After lessons Lindsay and I let the kids play while we bounced the babies.

I’m looking forward to going back tomorrow; hopefully it will go just as well.

There’s something a little different about teaching your own children something that you used to teach billions of other children. It takes a different kind of patience and a different kind of energy from what I use ordinarily at home or what I used when I taught swimming lessons at the Orem Fitness Center. But it’s a fun challenge to find a good balance between Rachel’s personality and mine.

Andrew told her that she needs to treat me just as she treats Miss Reeves—and so far I think she’s succeeded in that. She would never dream of saying “no” or “I can’t” to Miss Reeves and would never ever throw a fit for her. I don’t usually get that same treatment but at swimming lessons Rachel has been a gem.

Perhaps our new obedience system has played a part. We have three jars sitting on a shelf in our home: one is Rachel’s, one is Miriam’s, and one is Mommy and Daddy’s.

We had a Family Night lesson about obedience, discussing Jonah and Nephi and a few other quintessential role models of obedience, but without ever telling the girls what the theme of the lesson was. At the end we asked what we were trying to teach by sharing all the scripture stories we’d shared.

Then we broke out the jars and explained our plan:

Either way, Andrew and I get snow cones. It’s a great deal for us.

It helps us to praise the girls for their good behavior, reminds us to thank them. So far they’re excited to earn their beans and they’re getting in the habit of doing as they’re told. Sometimes Miriam will stomp her foot in outrage and then catch herself and sing out, “Yes, Mom and Dad! I will!” when we ask her to do something (as simple as “get your jammies on”). It’s a nice change.

When they aren’t obedient, though, I have immediate recourse.

“This is the last time I’m going to ask you to [fill in the blank]. Next time I’m putting a disobedient bean in the jar!” I’ll threaten. And either they’ll obey or they won’t. If they obey after getting threatened with a disobedient bean I don’t feel obligated to give them an obedience bean but if they carry on with their shenanigans then I’ll plop a disobedient bean into my jar and instead of getting too angry about their disobedience, I’ll feel happy that I’m one step closer to getting a snow cone date with Andrew.

The girls redeemed their jars for the first time today. We were going to go to Pelican’s yesterday but then Kim invited us over for one last hurrah at her house and we couldn’t say no. Miriam’s devastated that Claire’s leaving. So we went today instead.

We were almost afraid we wouldn’t be able to go around dinnertime, even though it was slated for dessert. It was well over ninety degrees and the sun was shining brightly and Rachel and I had gone out to the backyard to harvest some green beans to have with our spaghetti when the sun got covered with a cloud.

“That feels nice, doesn’t it?” I asked Rachel. I looked up from where I was working and across the garden plot to where she was working and my jaw just about hit the ground.

A thick, black wall of cloud was moving towards us, fast. 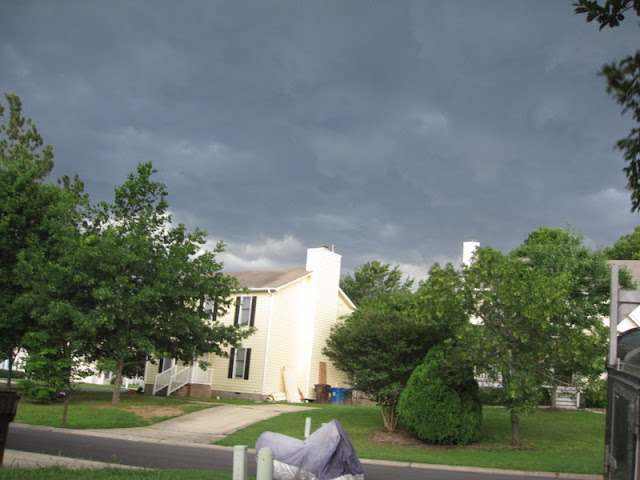 “Where did that come from?!” I gasped.

Without the internet we never seem to know what’s going to go on with the weather anymore. Rachel and I picked the rest of the beans (and one spider?!) as fast as we could, only pausing to (somewhat squeamishly) help the spider out of the bowl. 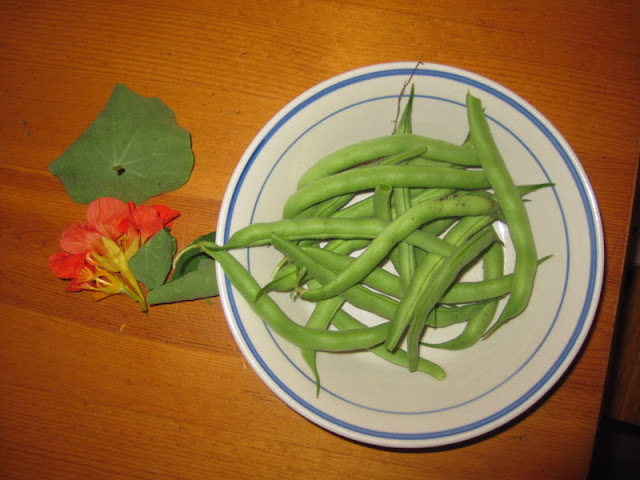 “It’s going to rain soon!” Andrew hollered at us from the kitchen door.

Ordinarily I’m sure he would have come onto the deck, but since we don’t have a deck at the moment that wasn’t exactly possible.

“Come help us get this spider out of the bowl!” we hollered back.

He came out to the backyard through the front (but we’d already gotten the spider out).

“I just got a text message with a severe thunderstorm warning. It’s supposed to start raining in the next seven minutes,” he said, just as the rain picked up.

Winds with the strength of a small tornado (the weather warning’s wording, not mine) ripped through our neighbourhood, uprooting our neighbour’s tree and whipping debris through the air. 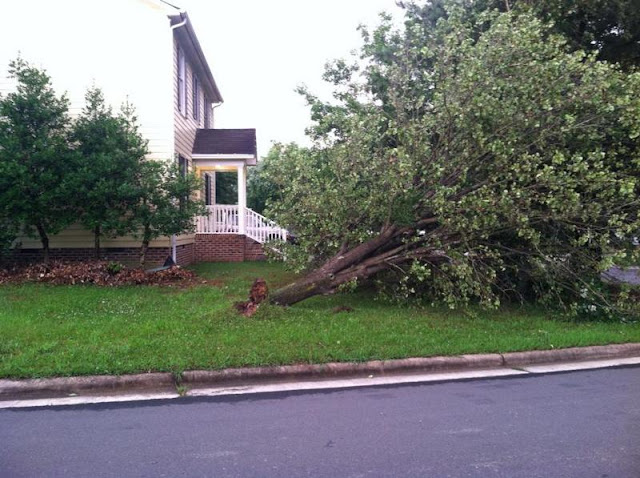 Rachel got hit in the face with a stick that was lobbed at her by the wind! We escaped the quarter-sized hail (fortunately the storm saved that treat for farther south (because I really want to see what my corn and sunflowers are going to do—the corn’s trying to germinate right now and the sunflowers are taller than Andrew!)) but got a decent amount of rain, thunder, and lightning to accompany our dinner, which we spent counting by one-thousands and oohing and ahhing over the thunder and lightning while dreaming of flavor combinations for our snow cones.

Things had quieted down by the time we finished eating and we all agreed that we should still go to Pelican’s, so off we went.

While we were eating our snow cones, Miriam and Rachel hatched a master plan: they’d fill up their obedience jars by the time Grandma’s plane touches down on Monday without getting a single bean in the disobedient jar.

I fully approve of that plan.

Our days haven’t been perfect since we began this obedience-system, but we have seen some remarkable things. Since neither girl wants a disobedient bean to wind up in Mommy and Daddy’s jar, they’ll jump in with offers to help do an unwanted chore or will give up something they wanted so the other one can have it just to avoid a conflict (and a disobedient bean). They’ll do extra chores to earn extra beans and have been finding ways to play with each other (and also Benjamin) nicely.

I think they’re figuring out that on days when everyone’s happy they earn more beans—Mommy gets really generous when she’s distributing beans—but on days when they’re grouchy and grumbly then they earn fewer beans—because Mommy starts handing out beans on a one-to-one ratio and throws in no extra beans “for doing it with such a good attitude.”

Hopefully this system will work for a while.
Posted by Nancy at 11:47 PM