This past week (on Saturday to be exact) Benjamin figured out how to stand up, from the ground, on his own power. He'd only recently begun experimenting with letting go of whatever he used to pull himself up in order to practice balancing and now he's already doing this: 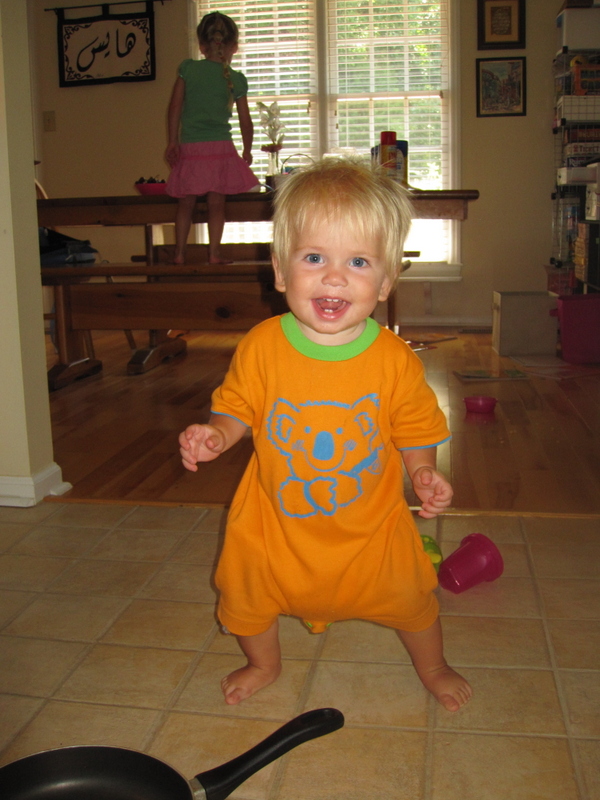 What originally prompted his unassisted standing was the division of the floor between our kitchen and dining room. Benjamin's always had trouble crawling over this line of demarcation. For a while he wouldn't cross it at all. Once he realized it wasn't an actual barrier he began awkwardly climbing over it. He'd speed-crawl right up to it, come to a full and complete stop, and carefully pick his way over it before resuming what was probably a break-neck speed chase of his older sisters. Our kitchen has two entrances which allows for sporadic chasing games to erupt.

Such a game was going on this past Saturday evening, when Benjamin came to his nemesis—the tile-to-wood transition—instead of picking his way over it he just stood straight up. Everyone was shocked. The girls started whooping and hollering, clapping and laughing. Benjamin stood there, grinning from ear to ear like he was the best thing since sliced bread.

Now every time he stands he looks around for us to notice him. He'll either put his hands up in the air triumphantly or will clap for himself. He's not vain at all.

When the girls notice him they usually give him what he wants.

As parents we've become quite the killjoy. Honestly, it was really exciting the first couple of times he did it but now he does it quite frequently so the whooping and hollering and dancing around the house has become more and more frequent until we can't stand it anymore...so we quash it. Though we think standing is as wonderful a skill to master as the next person we do not believe it needs to be so raucously celebrated all the time. If that were so, we'd all go around congratulating each other all the time on account of our bipedalism all the time. So we don't, though perhaps we should. It might bring a lot more joy to the world.

"I see you are standing," we could beam to one another. "Congratulations! Nicely done! Keep up the good work!"

Anyway, I suppose standing officially puts Benjamin on the brink of becoming a toddler. He's been pulling up on more and more things, standing on his tiptoes to see how high he can reach, doing his darndest to upset the "piles" of papers on my desk, to pull unsuspecting plates off the kitchen table, to unravel rolls of toilet paper and splash in unflushed toilet water when the girls forget to shut the bathroom door, to boldly go where he's never gone before (and more importantly to be wherever he's not supposed to be).

Today while I was trying to cook dinner, Benjamin entertained himself in the kitchen. 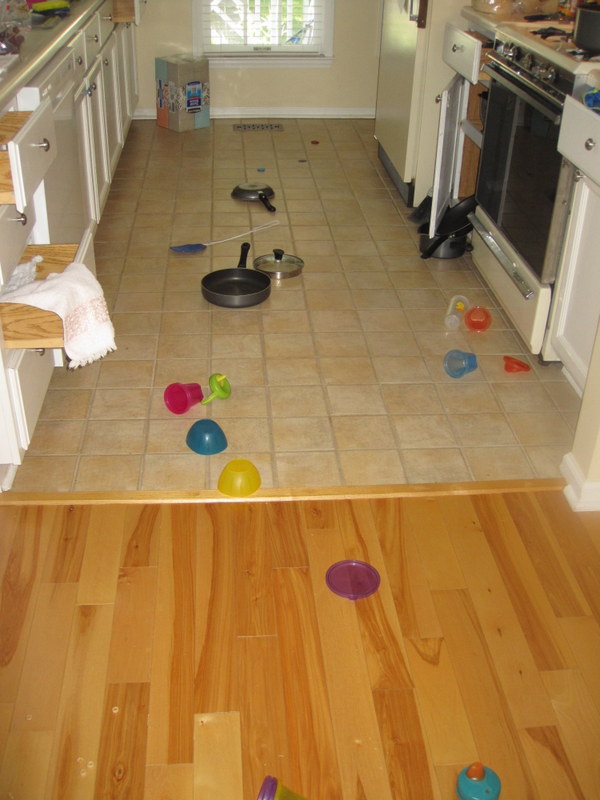 Later he got out even more, emptying the tupperware cupboard as well. He did that while I was busy at the stove and when I turned around my foot landed on an upturned bowl and I went sailing. I am so lucky that Andrew was there to catch me or I would've been in a lot of pain, I'm sure.

In short, Benjamin is into everything all the time. It's a good thing he's so cute.

He was really giving Grandma quite the show on Sunday when we skyped with her. He was playing with a ball—throwing it, biting it, and so forth. He was being so silly (he was definitely showing off, but at this age that's acceptable behavior).

He does love the computer. Skyping has always been a favourite pastime of his but more recently we reinstalled AlphaBaby on the computer and he loves that, too. Truthfully, I put it on the computer for Miriam because she's always begging to type, but Benjamin loves to take his turn banging on the keyboard. When he uses it we set it to shapes and the computer names each shape as it appears on the screen (for Miriam we set it to type regularly). I don't know if Benjamin gets much out of it (besides enjoyment) but Miriam surprised us by correctly identifying a trapezoid on a stencil the other day. 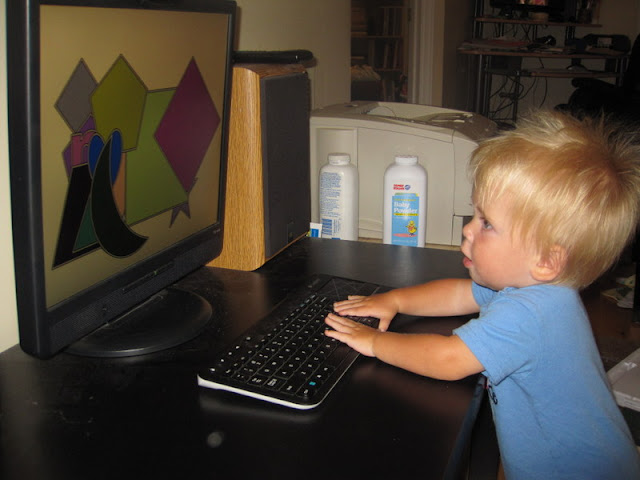 It's a joy to spend my days with Miriam and Benjamin while Rachel's at school, though I can't deny we miss her terribly while she's gone. Today at lunch Miriam even set a place for Rachel, even putting grapes and half a sandwich on her plate! It's kind of strange to have her be in school in the middle of summer, but we're certainly looking forward to the break we'll just a few weeks after school starts for everyone else.
Posted by Nancy at 12:18 AM