Rachel's hair was just about to her waist. It was luxurious. It was beautiful. It was so fun to braid and put into buns and things...when she would let me touch it. But it wasn't often that she would let me touch it. Even putting in a simple ponytail would cause fits and tears. We had a fight about hair practically every morning last school year (unless I let her "do it herself" and sent her to school with a tangled mass of hair "held back" by a poorly placed barrette).

"If we cut your hair short we wouldn't have to worry about this," I told her a countless number of times, but ultimately it was Andrew who convinced her to take the plunge. I'm not even sure how he did it but once he did and Rachel had chosen her length (which was right around her shoulders) I suggested we just measure off 10 inches and chop off her pony tail to send to Locks of Love.

She was super enthusiastic about the idea, so that's what we did.

No sooner had I chopped off her ponytail than she had jumped up to look in the mirror.

It took a little convincing to get her to sit back down so I could straighten it out and give it a we-did-this-on-purpose look rather than a we-accidentally-hacked-off-her-ponytail look. 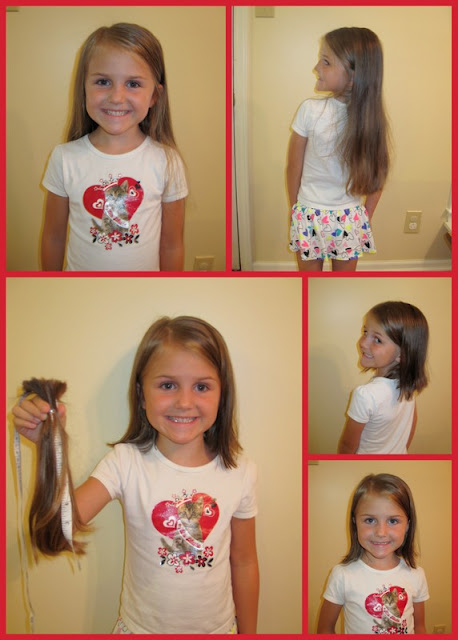 It's still long enough to fit into a ponytail, Rachel is excited to try two little piggy tails, but most of all she's thrilled that brushing her hair isn't the chore it once was. She's also excited to send her ponytail off in the mail.

I miss her long hair already, but I also like it short.
Posted by Nancy at 12:05 PM