The girls filled their "Obedience Bean Jars" last night, coinciding beautifully with Rachel's birthday, and were excited to claim their snow cone rewards at Pelican's this morning. Miriam was being such a slow poke about getting her morning jobs done (emptying half of the dishwasher; so taxing, right?) so Andrew threatened to leave without her if she didn't hurry up.

"Uh...I'm not old enough to stay home alone so you're not going to do that," she said, rolling her eyes.

He was kidding anyway, but it was rather humorous how quickly she stripped us of power. We eventually got her to finish her job and loaded all the kids in the van to head to Pelican's. At least, we let them believe that's where we were going the whole time we were driving.

Rachel had brought a book in the car and was completely oblivious to her surroundings. Miriam though kept piping up, asking if we were almost there. Rachel kept shushing her (she was trying to read!). When we pulled up in front of the Morehead Planetarium instead of Pelican's Snow Cones, the girls stumbled out of the car. They dazedly blinked in the sunshine and spun around a couple of times.

"I thought we were going to Pelican's! I want a snow cone!" Miriam shrilly wailed.

"We're going on a surprise adventure first!" Andrew informed the girls. Their faces both lit up in wonder and then excitement as he explained where we were going.

As I've explained before, the girls both are rather fascinated by space...so we went ahead and bought the pass, which is technically just a donation to the planetarium that they thank you for by allowing you to attend shows for free. We're looking at it as an extra-curricular educational activity for all of us. Andrew's a push-over when it comes to spacey stuff.


We walked through some of the hallways before the show began and learned all sorts of interesting things, not the least of which was that the Morehead Planetarium was used for space training.

Rachel was fortuitously (for a space aficionado) born on the anniversary of the lunar landing. Today she got to sit in the same planetarium as the astronauts who walked on the moon:


From 1959 through 1975, Morehead Planetarium hosted an astronaut training program designed to teach stellar constellation recognition and stellar navigation.... Both [Neil Armstrong and "Buzz" Aldrin] attended the training program.... In total, Aldrin attended five training missions and Armstrong completed eleven at Morehead between 1964 and 1969, and the two trained together in the program twice, once in 1968 and once in 1969.

She thought that was pretty cool (and so did everyone else). The show itself, Magic Treehouse Space Mission, was wonderful. Rachel was in awe the entire time and even Miriam followed along fairly well, though she's never read any of the stories she's heard plenty about them from Rachel and even went on a few "missions" with Rachel yesterday on the Magic Treehouse website.

The author of the series, Mary Pope Osborne, sounds like an amazing person. She seems bent on letting the books stand on their own two feet and hasn't built an entire empire on it (unlike Harry Potter, for example). The books are good enough and popular enough that I could see movies and dolls and all sorts of paraphernalia popping up, but...there's not. According to Wikipedia, "Magic Tree House merchandise is rarely offered and usually for an educational purpose. For example, a small selection of t-shirts, bags, and pencils are available in support of Osborne's alma mater at the UNC Morehead Planetarium." She's also written companion fact-checker books with her sister. But there's no theme park or movie series (aside from the show at the planetarium, which was specially commissioned).

Not that there's anything wrong with how wildly popular (and monetized) Harry Potter (or other such books) has become (because Harry Potter World was really neat), but I must say that I admire how she's shied away from that sort of thing and is just letting the books be what they are.

We learned that the Chancellor of UNC, Holden Thorp, who also served as the director of the Morehead Planetarium, had a babysitter when he was four-years old and her name was Mary Pope. Later, when she grew up to be Mary Pope Osborne, the author of the Magic Treehouse Series, and when he grew up to be the Chancellor of UNC, he asked her to write a show for the planetarium and so she (and her husband) did. At first (like in 2009) it was shown on the old Zeiss projector—a big, wonky thing that sat in the middle of the room—but in 2010 they installed a "fulldome digital video (FDV) projection system" (with the projectors on the wall and out of sight below the screen) and digitized the Magic Treehouse show so now it can be shown at Planetariums globally. They took out the old Zeiss machine about two years ago and I must say, it looks so nice and roomy without it (not that I saw it while it was still there; but compared to BYU's planetarium it was so roomy).

Anyway, the show was fun. Benjamin often cowered into my shoulder and had to take a nursing break, but he was quiet through the show. The girls, as I mentioned, were completely awestruck. The best part was near the end when Annie (who Rachel keeps calling Ay-nee because that's how she's been reading that name in her head) wishes we could see a black hole while looking at a picture of a black hole in an astronomy book. We're whisked away into deep space where we see a star explode and then start getting sucked in by its incredible gravitational pull.

Both Miriam and Rachel were almost in tears.

But then either Jack or Annie (I can't remember which) wish that we could visit "M," whoever left the note in the first place. They thought it was either Merlin or Morgan. I thought it was going to be Morehead. But really it was Mary (as in Mary Pope Osborne). So we went to visit her instead of being spaghettified and the girls breathed a huge sigh of relief.

I'm not sure that Miriam had a favourite part. She was still worrying about "being p'skettified!" at bedtime.

After the show we went downstairs to visit the tar exhibit. Apparently tar is really bad for you but we accidentally made a whole bunch of it when we were all into coal and then we did a whole bunch of awful stuff with it, like turn it into soaps and dyes, and it got into our water supply and soil, which continues to make people sick to this day. So we're still trying to clean it up. Oops. (Go Tar Heels!)


We also explored some of UNC campus. I'd never been there before. It's quite beautiful. We found the legendary Davie Poplar (as well as Davie Jr.) and took some pictures with...him. This tree is at least 300 years old. 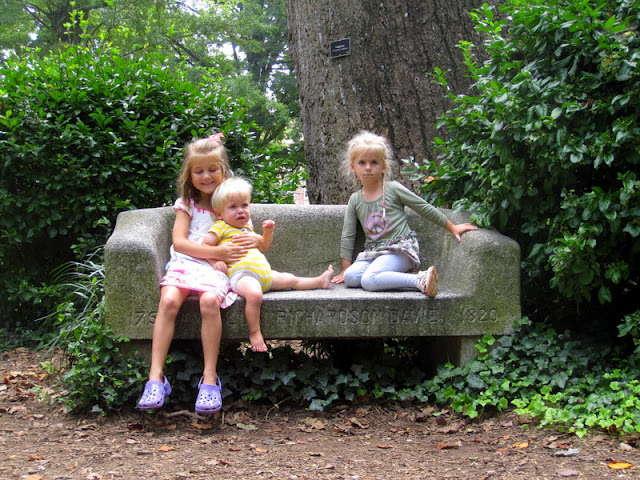 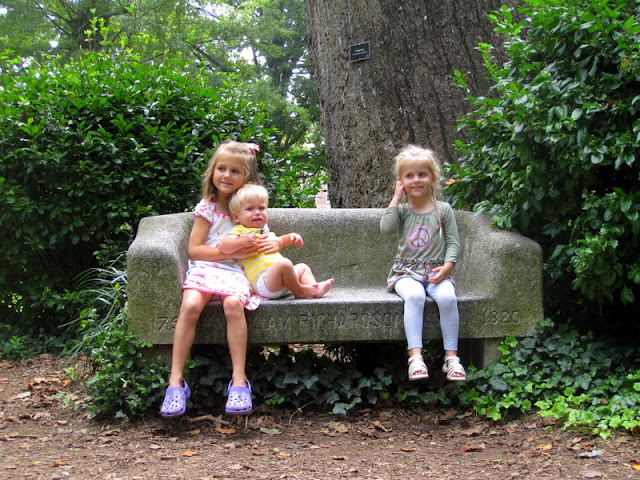 We (but most especially Benjamin) enjoyed the Fordham Fountain... 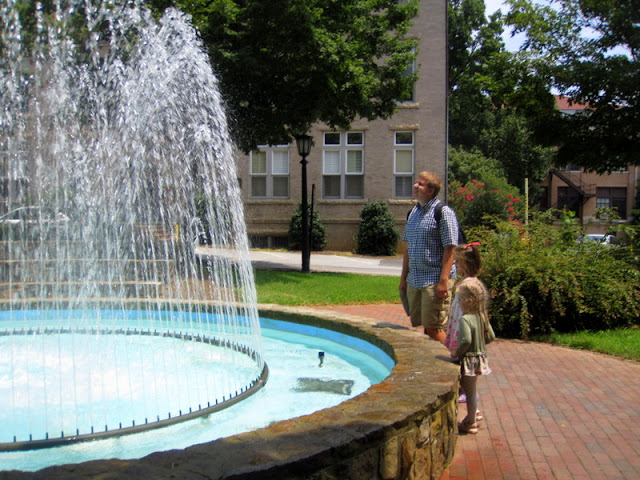 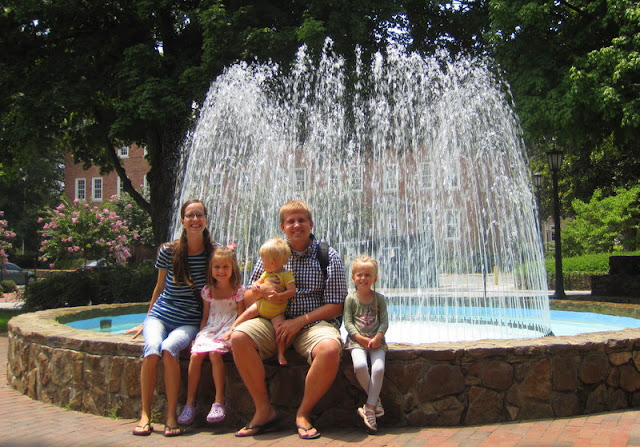 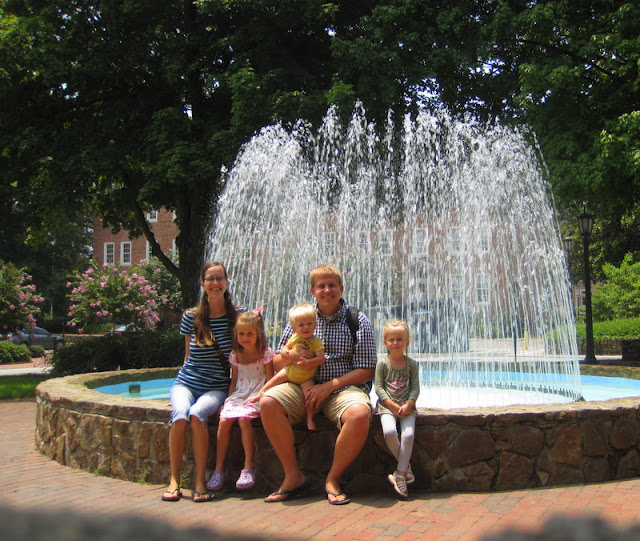 Benjamin was such a happy boy this afternoon, at least whenever he was being carried by Mommy or Daddy. 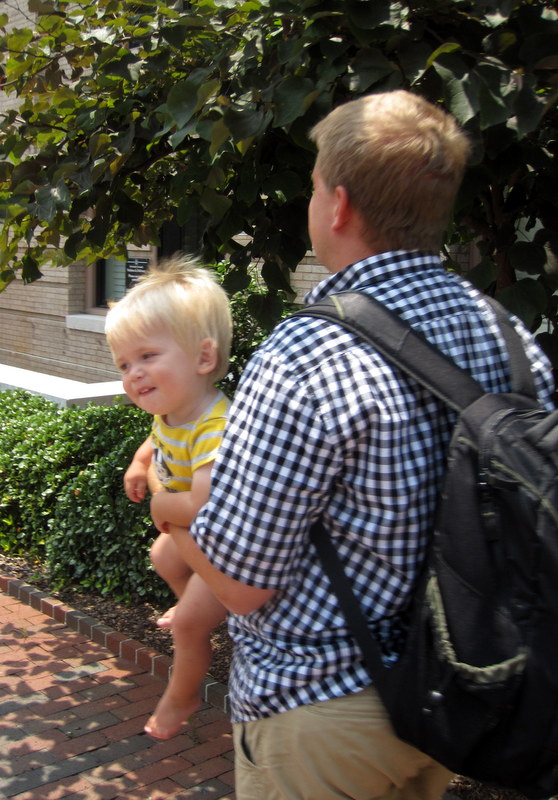 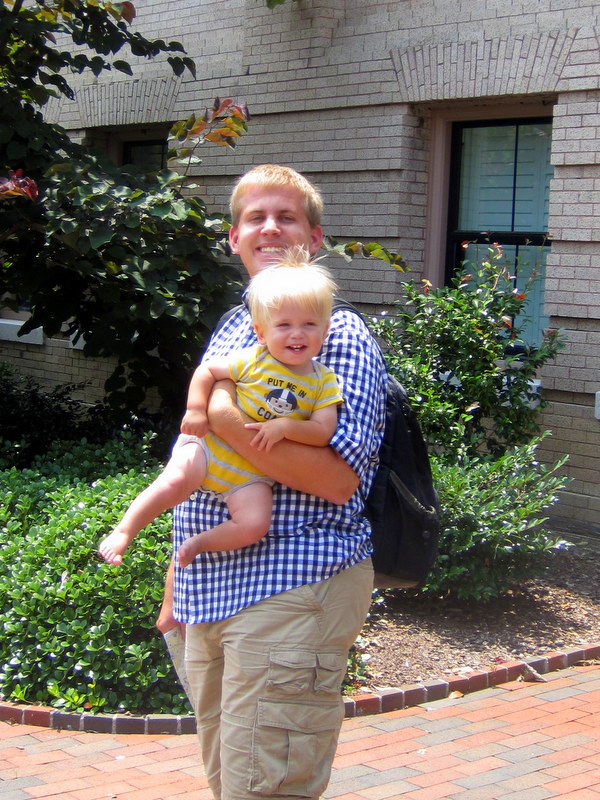 We walked all the way to the library. 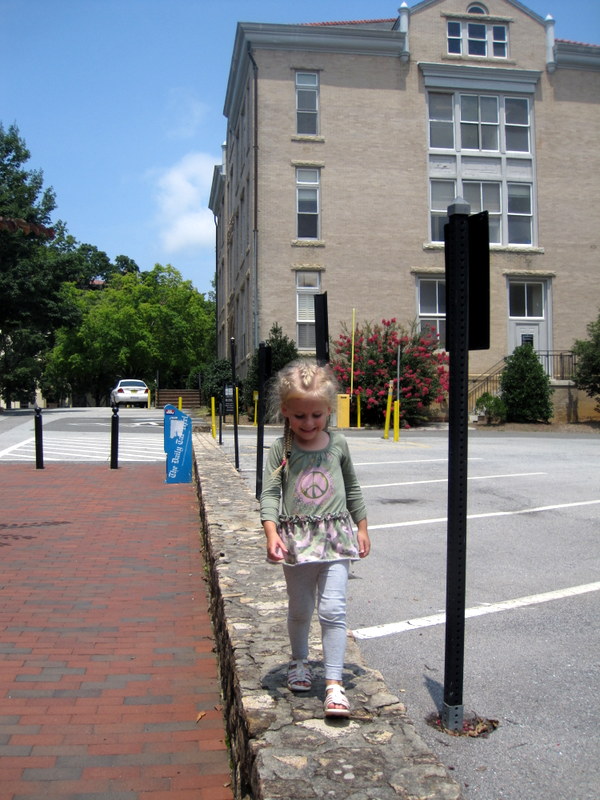 Rachel was so excited to go inside. She wants to go to university one day, but probably to Duke because that's where Daddy goes and sometimes Duke students get to go on field trips to UNC (she's not sure if it happens the other way around). The library was closed (it's the weekend...and summer break) so I said, "Let's just take a picture of Rachel in front of the library she'll go inside someday." 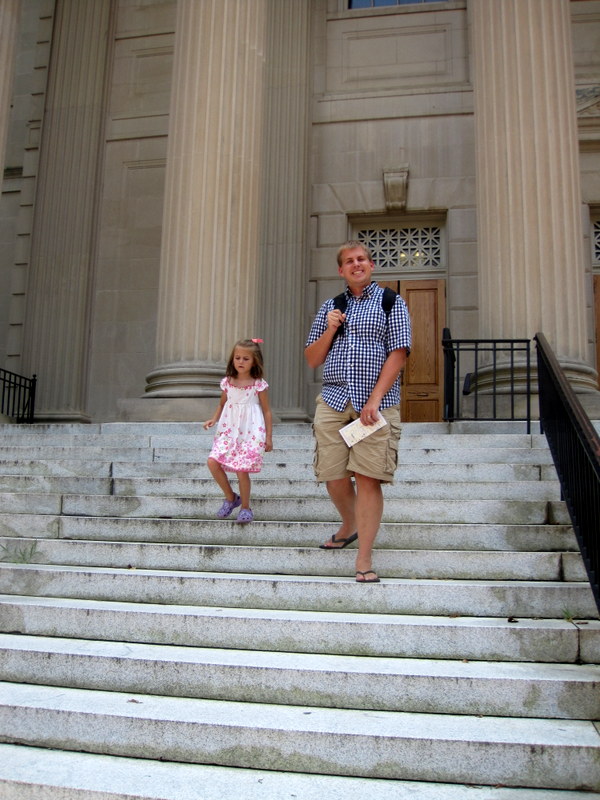 "Maybe," she said. "I might not ever go to college because you don't really want me to make it there."

"What do you mean?" I asked, quite shocked. "I'd love for you to go to college."

"But you don't want me to grow up! You told me to stop just the other day, so I'm trying. But if I do stop growing up I won't ever be big enough to go to college," she explained. "So then I won't be able to go." 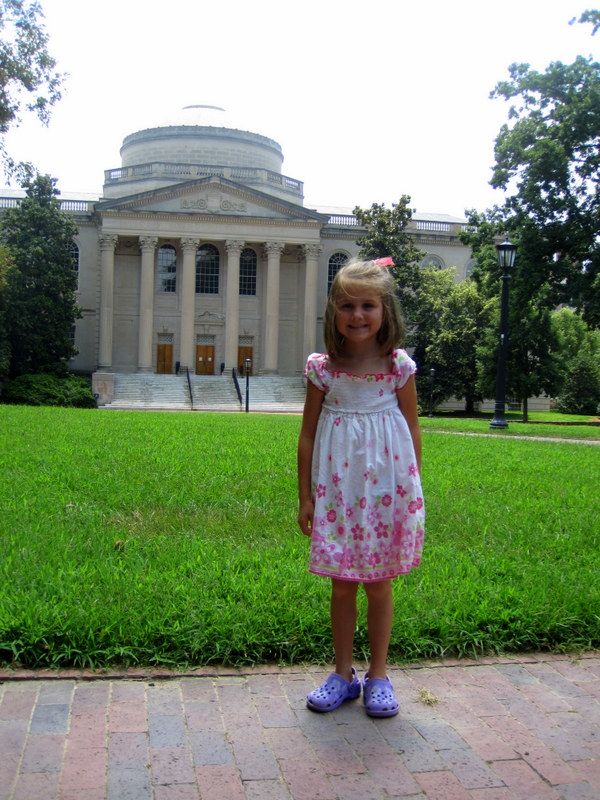 "Oh, honey," I said. "You can't stop growing up. One day you will be big enough for college. That can't be helped. I want to watch you finish growing up but sometimes it's hard for me because it's just happening so fast!"

How do you explain motherhood and all the crazy feelings that come with it to a child? I'm sure I botched my explanation, just as I botched explaining my feelings for Star Wars to Rachel when she was three years old. And she'll never forget it. Andrew told me on the way to UNC this morning that I should've told her that "Star Wars isn't cerebral enough; it's mere escapism." And I was like, "Yup. That's totally what I should've told our three-year-old."

Anyway, I know my kids are still little, but it really does seem like time is moving too fast. They just keep growing! I can hardly keep up! 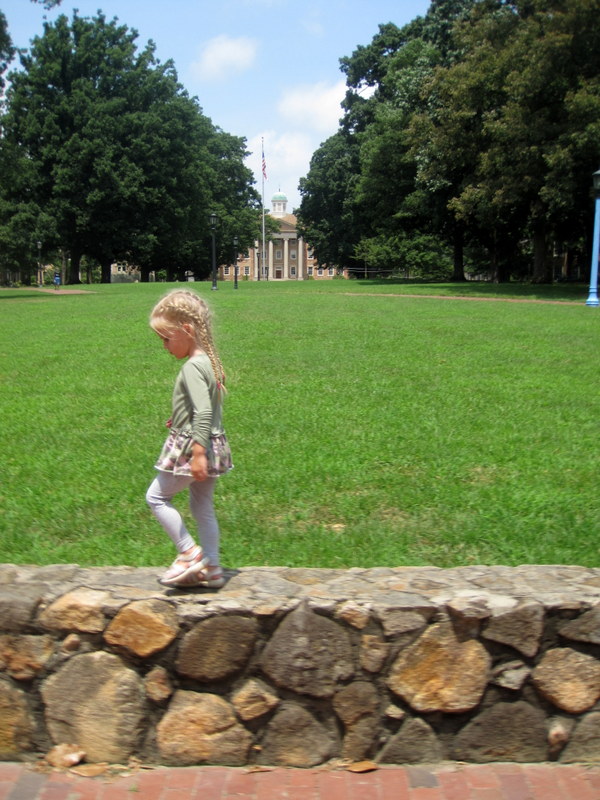 I love crepe myrtle trees. I guess they're quintessentially southern, so I don't know if locals take them for granted. I think they're glorious (though I do wish we had a pink or purple one in our yard rather than a white one (but some things can't be helped). Here are the kids under a lovely pink crepe myrtle in front of the undergraduate library (which was open (which was great news because some little people in our party really had to pee)). Benjamin, as you can see, wasn't too happy in Rachel's arms. 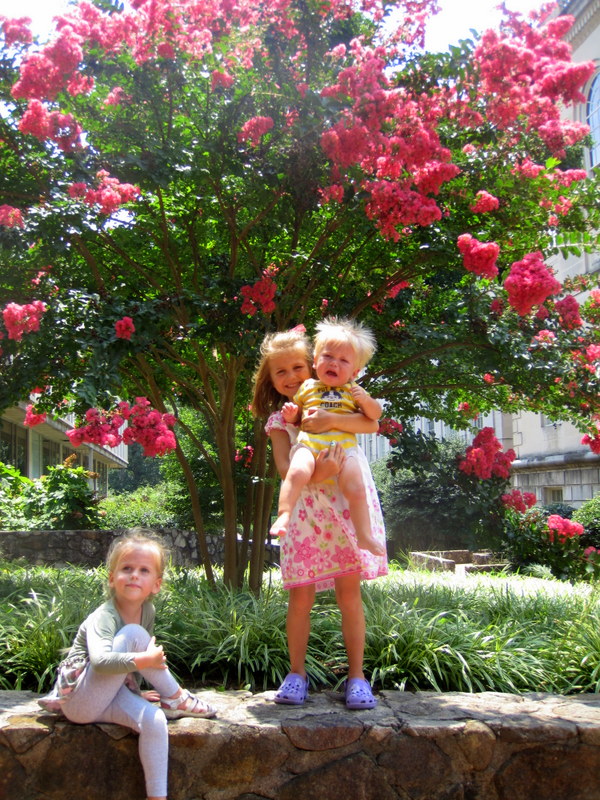 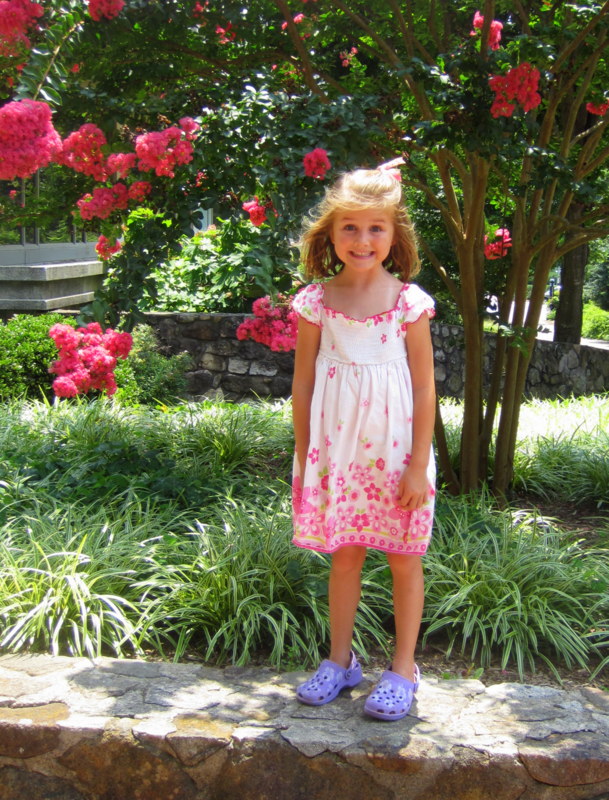 Here's Rachel doing a little light reading in the library while waiting for Miriam to get out of the bathroom: 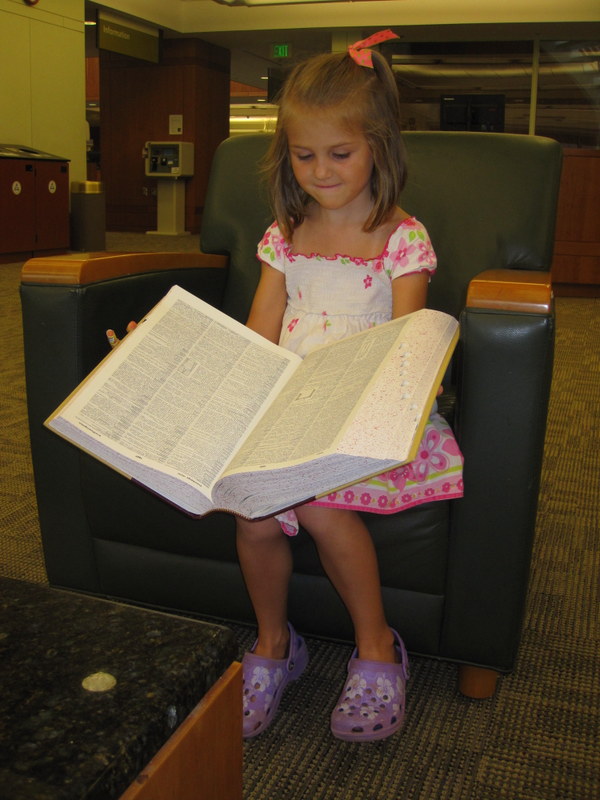 And here's Benjamin admiring his reflection in the table top: 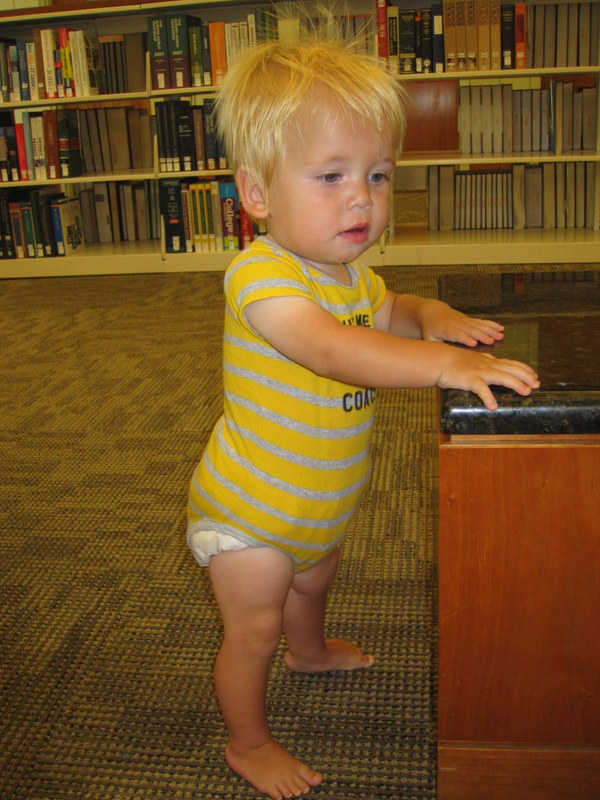 We stopped by Pelican's on our way home from UNC and even allowed Rachel to choose "worms and dirt" (which is root beer flavour with gummy worms tucked in the middle) since it was her birthday (it's 50 cents more than a regular snow cone). 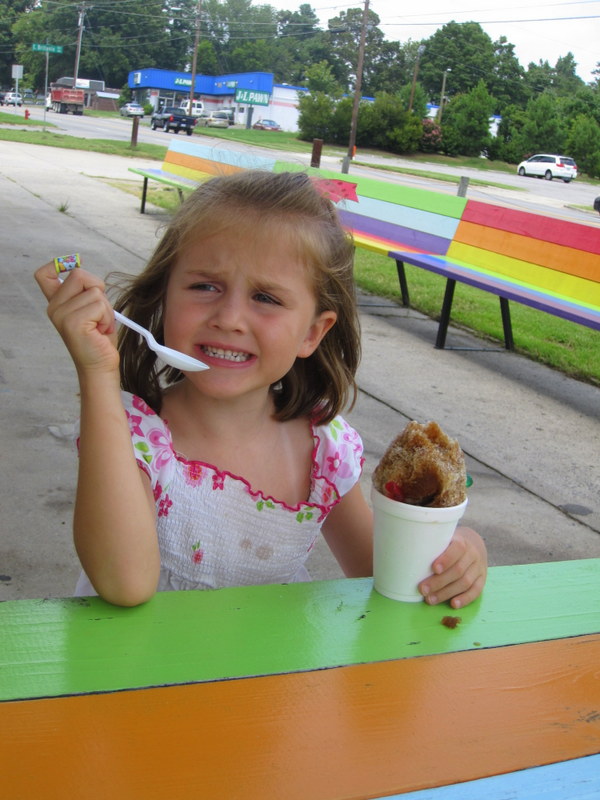 We tried eating outside but there were so many bees around that we simply couldn't. The bees were so punch-happy that I don't think they would've actually stung us but Miriam was screaming her lungs out and was shaking in fear so we retired to the van where we enjoyed our snow cones in absolute safety. 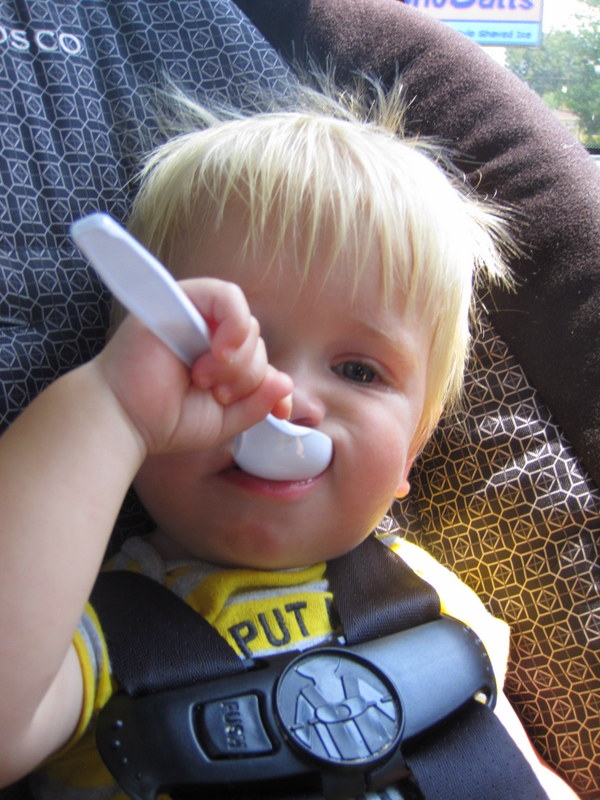 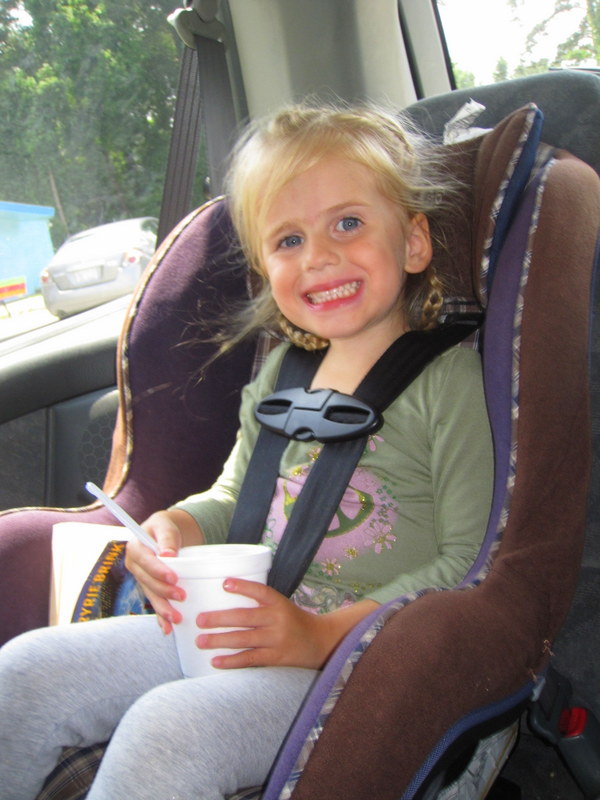