Recently I found out that The Magic Treehouse has a website. I showed it to Rachel and she got all excited and took a bunch of quizzes to earn stamps for her "passport." I might have her sit down this weekend and take the rest of the quizzes just so we can have a definitive list of which books she has and has not read because picking books for her is getting tricky.

She came home from school the other day exclaiming about how she'd finished Dinosaurs Before Dark during reading time at school and that she wanted to get onto the website to take the quiz!

"You finished an entire Magic Treehouse book?" we asked.

"How long is reading time?!" we asked.

"But you had enough time to sit down and read an entire book? That sounds like along time to have silent reading..."

She can read a Magic Treehouse book in about an hour if she's free from distraction.

"Well, I guess it took me two days. I started it yesterday and finished it today."

Rachel's beginning to understand the concept of time, but time is a tricky concept. There's so much to remember! Seconds, minutes, hours, days, weeks, months, years, and on and on! It gets confusing, especially for the little ones for whom time seems so stagnant.

Now fast-forward a couple of decades later. All of a sudden you're like, "Wait a minute. How old am I? Am I turning twenty-nine or thirty this year? Or am I even that old? Or am I older? What year is it?"

At least, that's how it is in our household.

Our girls are always planning for their next birthday—and sometimes even the one after the one that's coming. I think Miriam has her cakes picked out for the next five years!

Miriam was doing her "homeschool" lessons this afternoon. She is so excited to go to kindergarten, but unfortunately (or fortunately, depending on how you look at it (I kind of like keeping her home)) she still has two more years at home. We do a few educational activities here and there, but I'm not really formal about it. This week, though, she's been quite regular about asking for "homeschool" because our household is still caught up in the magic of the beginning of a new school year.

Today she pulled out her alphabet primer and flipped to the back where she found all sorts of fun things to do. The pages on the months of the year kept her busy for a full hour. She talked about each month, traced the letters, copied the words, talked about each month some more, wrote some nonsense words, and even sounded out a few actual words for good measure. 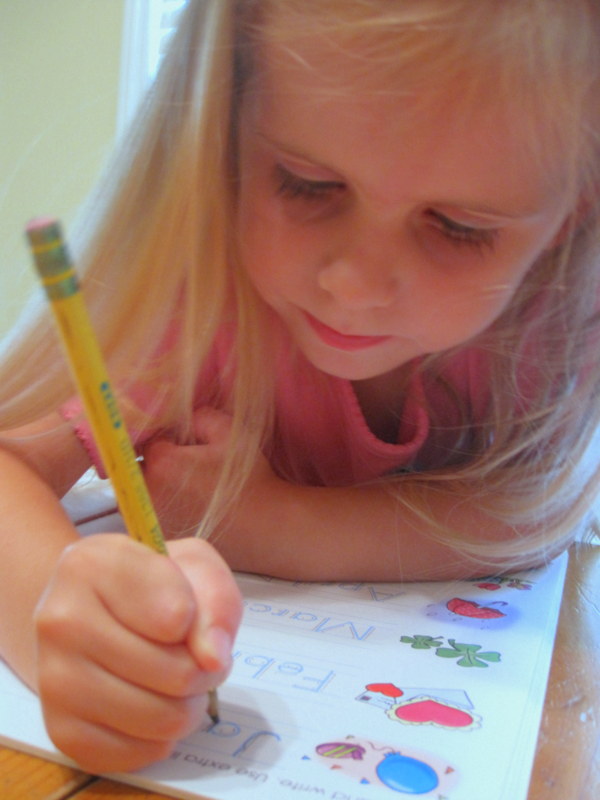 "Mom, can you help me spell Bingo?" she asked.

The song had been on her mind since we sang it at story time this morning at the library.

"Sure," I said and began singing, "There was a farmer who had a dog and Bingo was his name-o!" 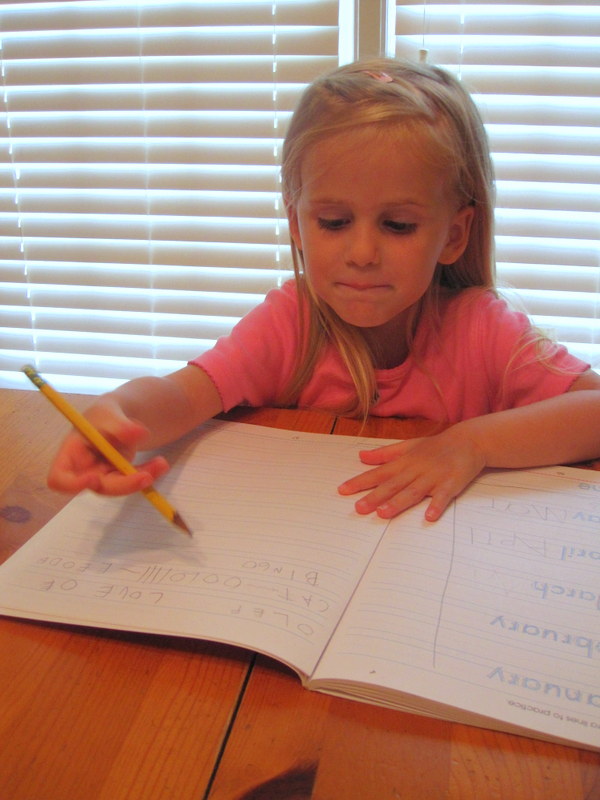 She told me so much about the months that I couldn't keep up with her, but here's what I managed to record:

"It's almost Rachel's birthday, so that's why it's July. But my birthday is in October and that's when it's Halloween and we get to hunt for candy! And after January is February and that means Valentines! And August is when we get to go to the beach because it's sunny! We get to go! I just love all the times!... We're so lucky we get all these months! And after all of them comes Christmas. Like, March, April, May... May!? That's an easy month to spell. Just M-A-Y, see? I'm going to spell it right now! Can you find me a pencil?" 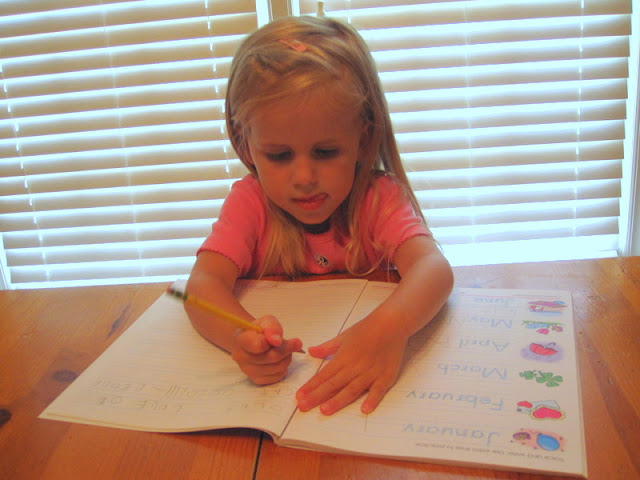 She likes words that are easy to spell. She loves that Rachel has a class called "PE" and that Daddy (and Mommy—but she doesn't ever remember that) went to a school called "BYU." Recently she's been drawing pictures of ET, which is another one of her favourite words to spell. 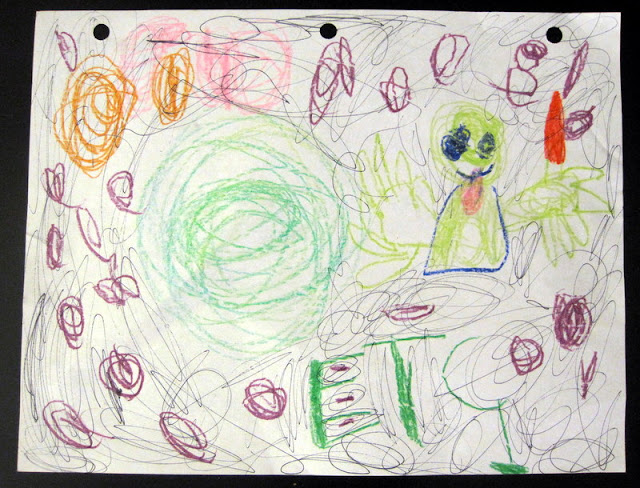 Everything she knows about ET she learned either from the ride at Universal Studios or from asking questions about the ride to either us or Grandma and Grandpa. ET is pretty easy to spot, but please note that he has one red finger. That finger glows sometimes and can heal you if you get sick. To the left of ET is "the green planet." The other circles in the picture are either planets or stars but I can't remember which. 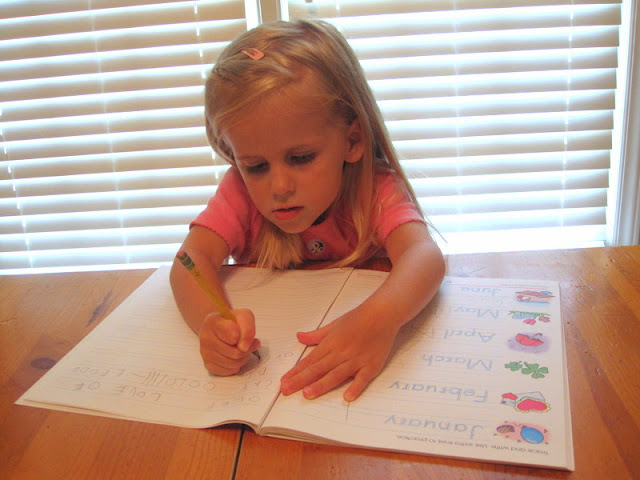 With a repertoire consisting of PE, ET, and BYU, it's clear this girl's got ambition!

She also knows how to spell her full name, Rachel's name, and with minimal prompting can get Benjamin's name down as well. She thinks she can spell mommy and daddy, though she usually forgets to double the second consonant. She's capable of doing a lot more, but tends to claim she can't. When I challenge her she can spell simple words like cat or dog.

Benjamin joined in on her lesson today. Sometimes he'll scribble but today he was just having fun banging his crayon on the paper. Miriam decided he was drawing stars and suggested we help him out... 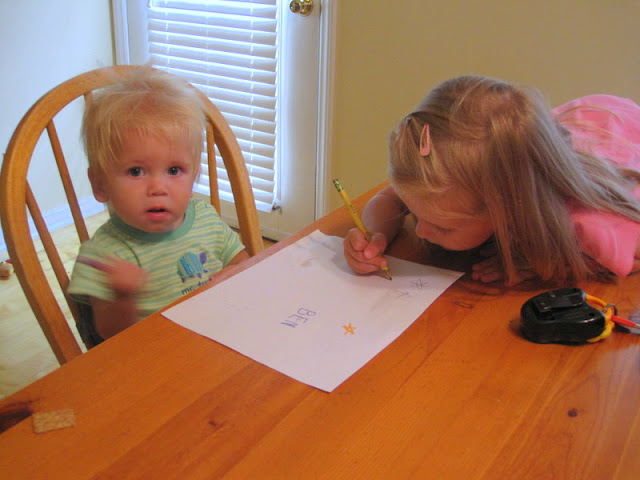 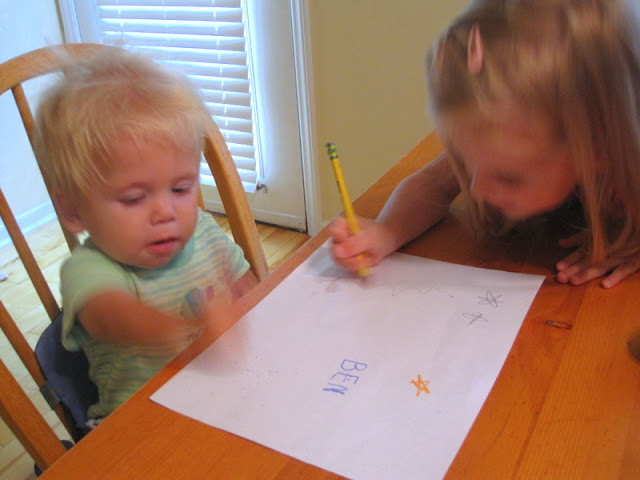 Both the girls enjoy the mystery of outer space. They're obsessed with Star Wars and perhaps even more obsessed with the fact that I once said I didn't like Star Wars. The exact quote is that "it's too pew-pew-pew." I like shows I can think about and Star Wars just doesn't give me anything for my brain to play with.

I realize my dislike of Star Wars is highly offensive.

I also realize that I will never live this down, which is part of the reason I realize that my dislike of Star Wars is highly offensive.

The girls will sometimes draw a brilliant picture of a nighttime sky, hand it to me and then take it back, saying something like, "Oh, never mind. You won't like this picture very much. It's got stars in it."

"But you don't like Star Wars," they'll point out, walking away with their artwork.

Now, Star Wars isn't my favourite but I don't hate it; it's just so "pew-pew-pew" (war is in the title) and I'd rather watch something else. I said that years ago. There's no way that Miriam remembers me actually saying it (though Rachel might) and yet it will live on in infamy. No, really. Soon Benjamin's going to pick up on it and then there will be no stopping it. That quote has taken on a life of its own, like a bad political sound bite.

I am interested in space, just not as much as Andrew, who was giddily telling me so many nerdy things about the Kennedy Space Center that I almost began to worry he'd come home one day and tell me he'd applied to astronaut school or something (which, knowing Andrew, isn't completely out of the realm of possibility, is it?). But I do stargaze with the girls and commit to wandering the space exhibit at the Life and Science Museum than I'd probably care to in order to foster the idea that Mommy does like space (to a point).

Today I was looking up information on The Magic Treehouse series because Rachel requested a Magic Treehouse birthday cake. Sometimes cake-decorating takes a bit of research. I never read the Magic Treehouse as a child, but I did tutor a boy who liked to read them and I remember them being pretty good, from what he read to me (I tutored him in reading so he read to me a lot). And the books have been floating around our house for weeks and have been the only thing Rachel's been talking about, so you'd think I could remember a thing or two about them...but when I went to the library today to pick up some new books for Rachel to read (she went through eighteen this past week) I couldn't even remember the author's name.

I eventually asked the reference librarian who scrunched up her face, thinking hard. She sighed and poised her fingers over her keyboard, prepared to type in my query (which I realize I could've queried myself on one of the public computers but, in all honesty, I was far too lazy to make that kind of effort while toting Benjamin, the diaper bag, a bagful of books, and dragging Miriam along). Just before her fingers hit the keyboard she retracted them and snapped her fingers.

"Thanks!" I said, before dragging us all over to the right place and thumbing through the books. It's so hard to know which ones she's read and which ones she hasn't. I picked out a couple that I thought she hadn't read (though the first one she pulled out of the bag was a repeat) before picking out some other books for her to try. Tigers at Twilight is one that I picked out that she hadn't read. She was happy I found one that was new to her, so happy that at 8:45 PM when I told her she only had 15 minutes before "lights out" she whined and said, "But Mom! I just started reading! I hardly had any time to read at all! Can't I just read for a couple more hours?"

I was glad to see that, according to Wikipedia, there are going to be a few new books coming out soon because as I scanned through that list it seems she's read most of them!

From that Wikipedia page, I clicked over to the article on Mary Pope Osborne (because it's impossible to read a Wikipedia article without perusing a few other articles (confession: I have eight Wikipedia tabs open right now (which isn't too bad))) and found out that although she was a bit of a peripatetic army brat, her family eventually settled in North Carolina after her father retired and she went to school at UNC! And although I think we originally found that out when we went to Barnes and Noble to get Rachel's book club book (they have a North Carolina authors section), I didn't know that the Moorehead Planetarium at UNC has a Magic Treehouse show! The things you learn on Wikipedia.

It's not a birthday party year for her, so we're just doing family stuff while still trying to make the day special for her because she's actually to an age where she cares about birthdays.

She originally wanted to go to the beach, but we're not sure if the weather will hold out for us. The forecast has been alternating between a 20% chance of rain to a 90% chance of a crazy thunderstorm and we're just not sure how Saturday's going to be. We don't really want to be stuck at the beach during a thunderstorm after what happened on Tuesday (when lightning invaded our property).

So if we don't do the beach, I think we'll definitely try the planetarium. It's around $6 per person or $70 for an annual family pass, complete with four parking passes. Andrew and I have been debating whether we should pay $12 (plus parking) for a Daddy/Daughter Date and call it a one-time thing or if we should just swallow the $70 and commit to going to the Planetarium at least four times before next year. It's a tough call.

We'll have it all figured out by Saturday, I'm sure.

How is it already Friday Eve?