One of the rooms was decorated with a Mickey Mouse theme, and that's where the girls stayed (since, you know, it had two twin beds in it instead of a queen (like the room we stayed in) or a king (where Andrew's parents stayed). They loved it. 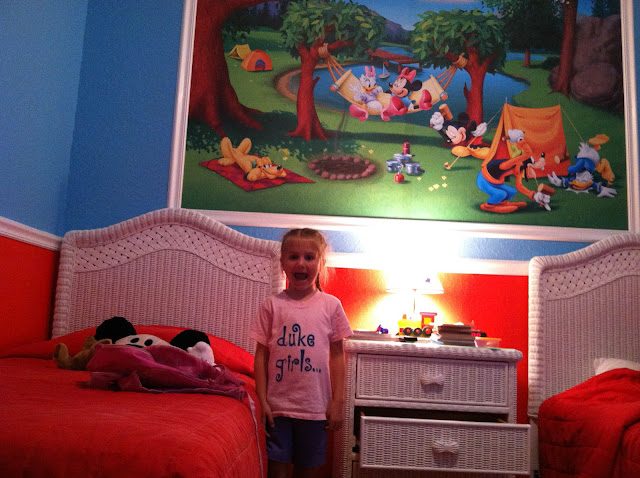 Their room also had a television and DVD player in it and on the very first night there we let them watch a movie in their room while we figured out dinner and got settled. They thought it was the best thing ever and kept saying that now it was just like Grandpa's room (because Grandma and Grandpa have a TV in their room and sometimes the girls would get to watch movies on their bed).

Here they are enjoying their movie: 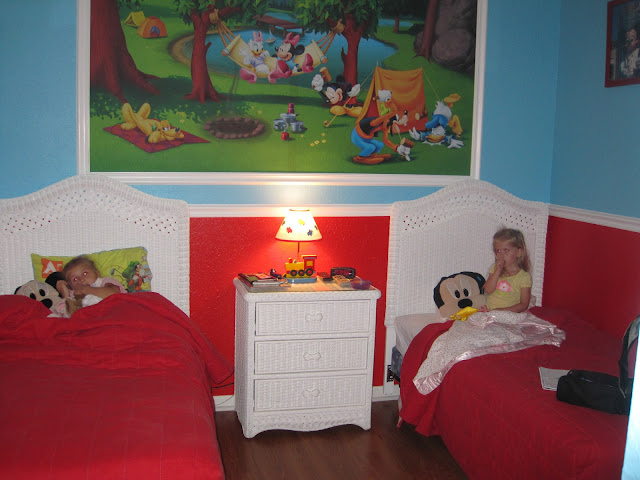 It was storming on and off while we were getting things figured out in the condo, but fortunately the rain held off while we unloaded all our things. In the middle of dinner, however, we were plunged into darkness. The power had gone out.

We started pulling out our gadgets to light things up while the girls fussed about how scared they were.

Andrew and Grandma were already under a bit of a time crunch since they had to go pick Grandpa up form the airport (he didn't want to drive down to Florida crowded in the van with us so he flew out instead). They scarfed down their pizza and then left us with one glowing iPad screen and a dinky handheld flashlight I had in my backpack.

With Benjamin securely strapped in the high chair (I've never had a high chair; they're oddly functional and now I kind of want one (but also kind of don't because I've survived without one for this long, right?)) and the girls flanking my elbows, we finished our dinner and even braved taking a potty break before the power came back on.

The girls insisted that they go to bed with their lamp on because they felt like they'd already been in the dark long enough, so I tucked them in, and left them to fall asleep with a single incandescent bulb chasing all their fears away.

I must say it was a joy to see these girls sleeping. Almost every time I opened the door—whether to wake them up or to check on them in the middle of the night—I had to stop myself from laughing.

One night we walked in and Rachel was flat on her back with her legs hanging off the edge of the bed, as if she'd been about to sit up. Right before we took the picture she fidgeted, which is why it's blurry. 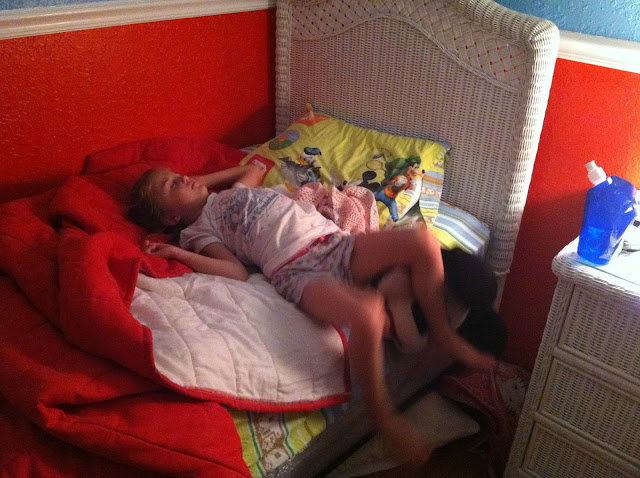 She rolled over onto her side, with a little root-toot-toot. 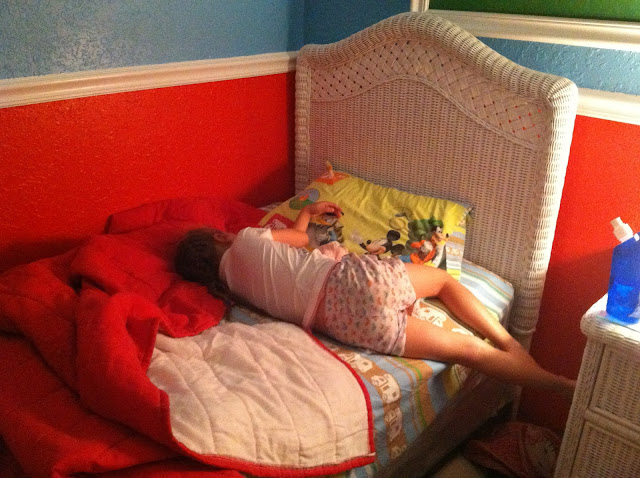 Then she flipped over onto her other side, letting out a few more toots. 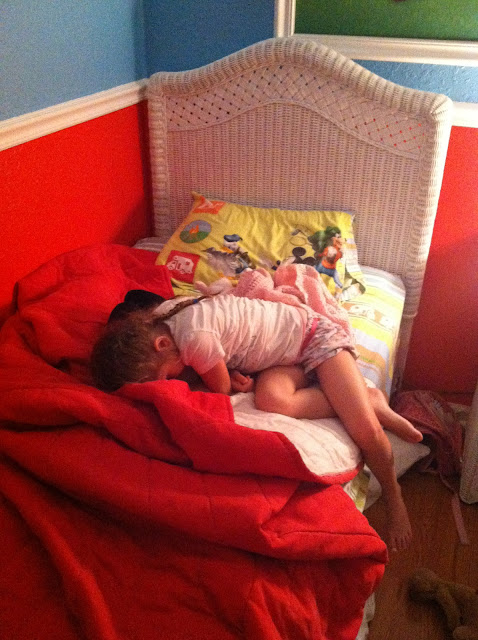 We decided that we coudn't just leave her tossing and turning on her bed like that, so we rotated her little body and just as Andrew lifted her legs she started tooting again.

We were dying with stifled laughter, stumbling over each other to get out of the bedroom without waking either of the girls up. 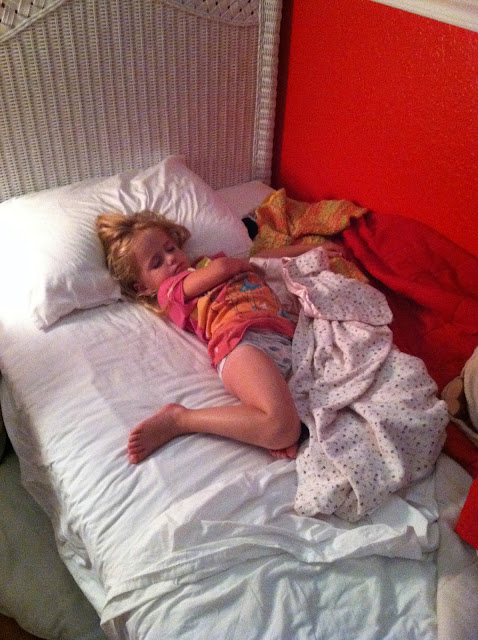 And here are the girls one morning when I went to wake them up, sleeping completely opposite of each other: 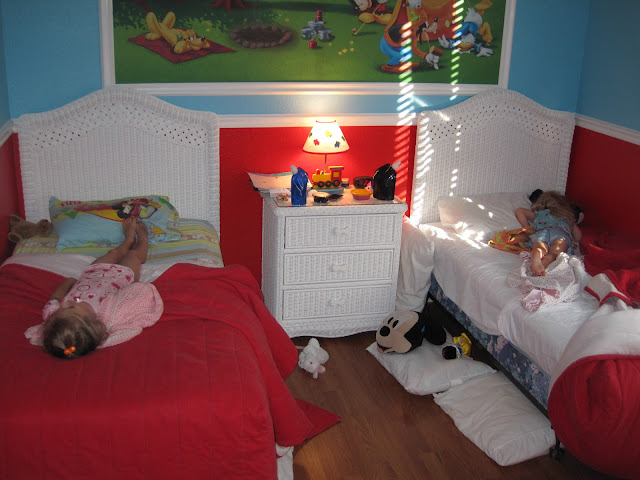 One flat on her back with her feet on her pillow.... 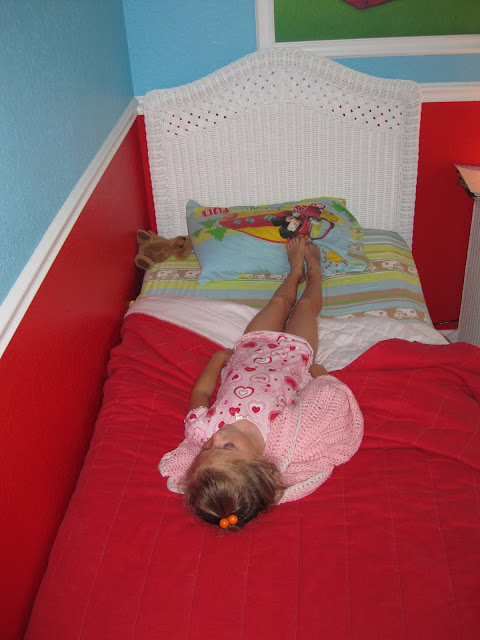 The other flat on her face... 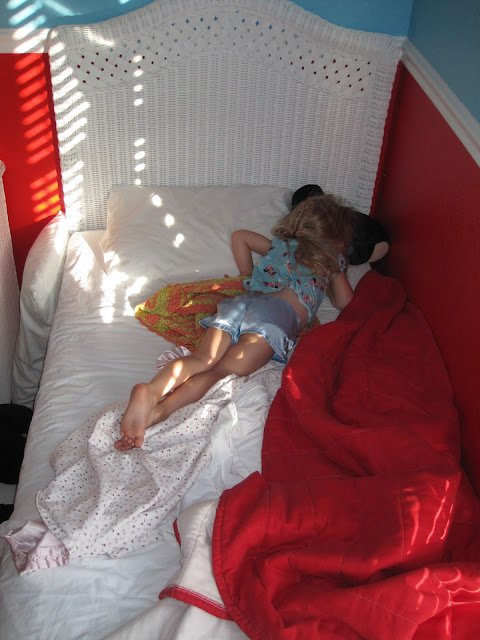 I laughed so hard. Quietly, of course, so that I could take pictures of them before waking them up.

They were so good about bedtime for our entire vacation, though that might have something to do with how we ran them off their feet every single day...
Posted by Nancy at 12:41 AM