I hosted our primary meeting this evening and had just gotten the girls into bed and was wrestling Benjamin into his pyjamas when the other ladies in the presidency arrived. I dragged my rocking chair over to the kitchen table and nursed Benjamin while we discussed the needs of our primary (meanwhile Andrew holed himself up in his office/our bedroom).

I hadn't closed the blinds yet since it was still fairly light outside (and because we'd rushed through dinner and bedtime and I hadn't gotten around to it). Eventually it started raining, as I figured it would since rain's been forecasted for every single day this summer, practically. As you can see, we've gotten 19 inches of rain over the past 90 days. And it just keeps coming! 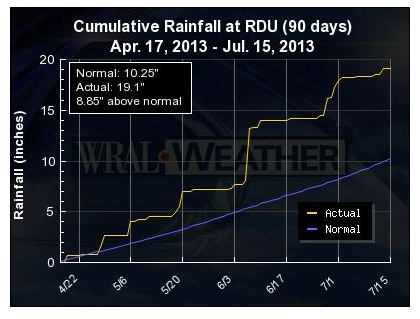 I was going to say, "What is this—Seattle?" But apparently we beat out Seattle for average rainfall...so...yeah...we're Seattle. Except that Seattle dries out in the summer while out here we get about the same amount of precipitation every month. We get between 3 and 5 inches every month. Seattle gets up to 6 inches per month but in the summer gets around an inch. We even beat out Vancouver, BC (43 to 42 inches), where lightning is far less common than I thought! We're certainly among the soggiest states here in North Carolina.

Benjamin wasn't too interested in nursing because there were people over, so he was sitting on my lap, playing with some diaper pins, while I talked with Marian and Terry and the rain pitter-pattered outside.

There was a blinding flash of lightning—not in the sky, but right in our yard!—accompanied by the loudest crack of thunder I have ever heard. We all jumped and screamed, though Benjamin screamed the loudest (and the longest). Andrew ran out of his office.

His desk faces away from his window and the blinds were closed, so he didn't see the actual flash, but he did see a flash and he certainly heard it. Of course we saw it! The windows were open. It had to've hit somewhere in our yard because the flash of light—a big, bluish explosion—was below eye level.

While hushing Benjamin, I rushed to the girls' room to check on them. Miriam was sound asleep. Rachel was sitting on her bunk, shaking.

At dinner we had told the girls that Mommy would be having a meeting in the kitchen after bedtime and that once they were in bed they weren't to get out of bed for anything.

"Except if we have to go to the bathroom," Rachel said.

"Please don't think of a list of exceptions now," Andrew said. "Just don't get out of bed tonight."

"But what if I have a bad dream. Then I can get out of bed," she said.

"You won't have a bad dream because you won't even be asleep yet. Just stay in bed and read."

"Except if I get a bloody nose. Then I can get out of bed."

Apparently lightning striking the backyard was not on her mental list of reasons to get out of bed. So she didn't. But I gave her permission to get out of bed and watch the storm for a few minutes and get some comfort from her daddy. It was, after all, terrifying.

We saw a few more flashes of lightning and I could tell we were all counting in our heads in order to calculate how far away the lightning was (5 seconds = 1 mile) It was usually closer than we thought and we'd all jump when the thunder cracked. We were still so hopped up on adrenaline we'd jump at anything.

Later, when the meeting was over and the storm had moved on and a safe amount of time had passed since we last heard any thunder (half an hour's a good rule of thumb) Andrew and I went outside to investigate. By this time it was too dark to see very much, though there was the lingering smell of burnt electronics wafting through our yard (and we do know what burnt electronics smell like). We couldn't determine where the lightning had struck, but we did startle a deer who was eating some figs off our tree. That's the first deer I've seen in our neighbourhood, but it's not the first lightning-strike I've heard of in our neighbourhood.

Just as I'm running into way more Nancys than I ever have in my life (and not all Mormon ones, either—two Nancys work at our ballet studio, Rachel's TA's name is Nancy, etc.), never have I ever heard so many stories of lightning strikes! All of a sudden (since May when the Kramer's house got hit) stories of people's property being struck by lightning have been coming out of the woodwork!

The Welling's A/C unit got hit by lightning. Terry, who was sitting beside me when lightning hit our yard, had lightning strike her house a couple years ago. My friend (and Crystal's friend) April's yard got hit just last week.

And that list is just a drop in the bucket.

Turns out, we're in the top ten (top five even (because North Carolina is #4)) of the most dangerous states for lightning strikes! Florida is the #1 state for lightning strikes, which is funny because the state nickname is "The Sunshine State," yet it storms (complete with fantastically crazy lightning shows) nearly every afternoon. Florida has about three times as much lightning strikes as we do but we still have a lot! And it kind of creeps up on you!

Lightning is fairly unpredictable. You never know where it's going to strike, so "when thunder roars, go indoors!" Inside a building with plumbing or inside a hard-roofed car are the best options. And then wait for a half hour after the last thunder/lightning before going back outside.