So many pictures, so little time

Rachel has figured out how to give Zoë piggyback rides. She balances Zoë on the arm of the couch and then lets her cling to her back...and also flip backwards so she's dangling upside-down (which is slightly terrifying for me). 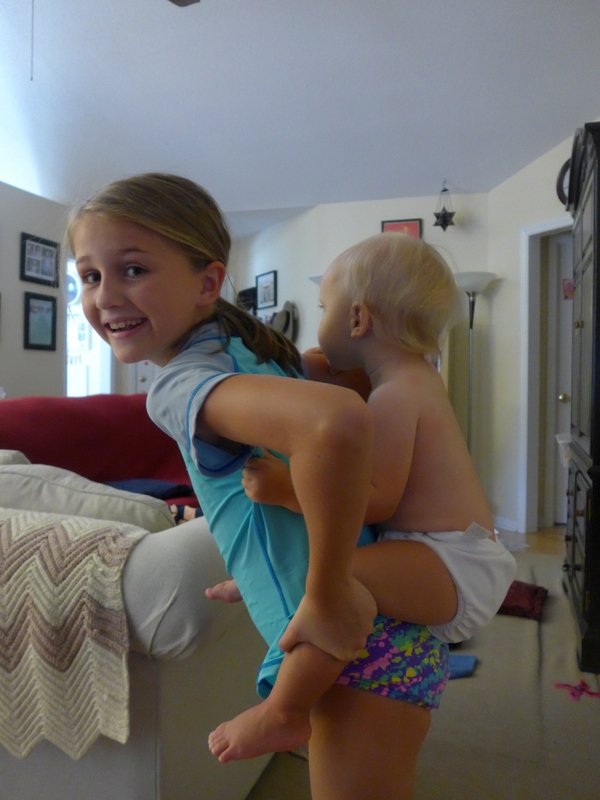 We broke out the watercolours the other day and let the kids go to town. Benjamin painted some letters: 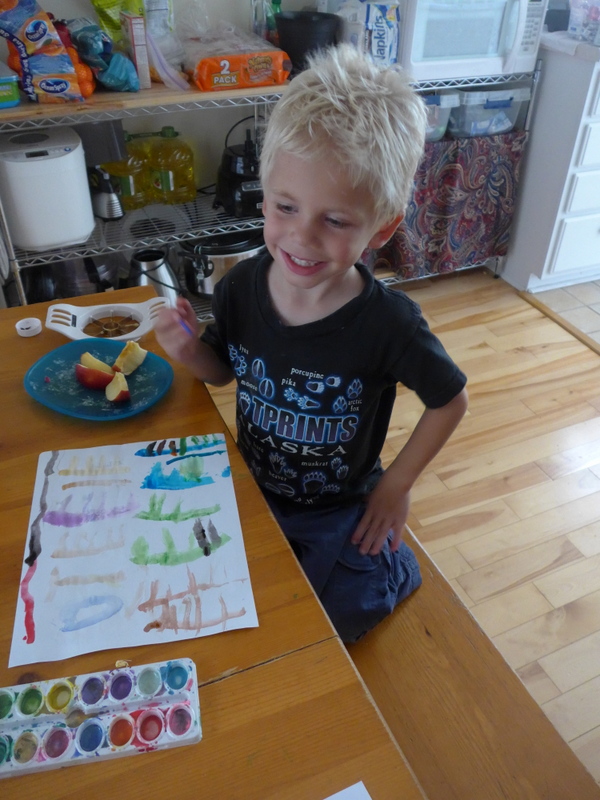 Miriam worked on a landscape: 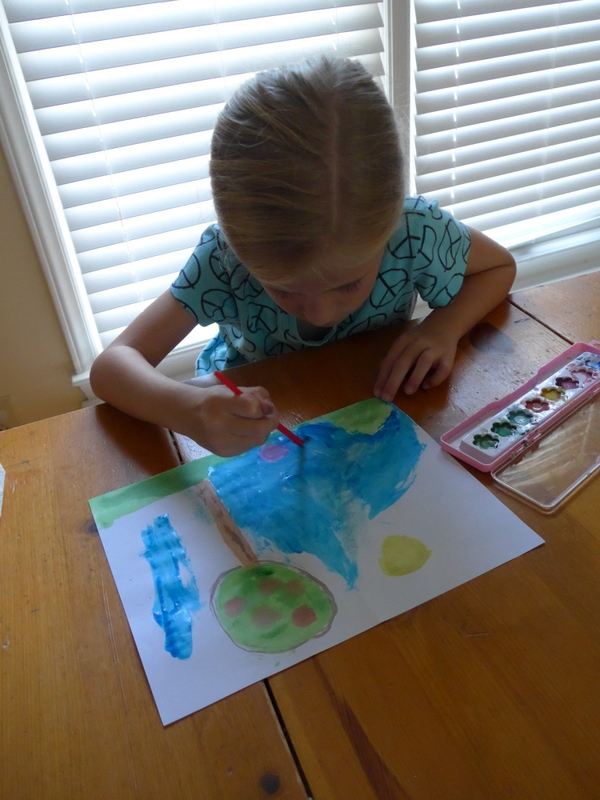 And because this happened on the same day we'd gone to Duke Gardens, Benjamin painted a picture of Duke Gardens as well: 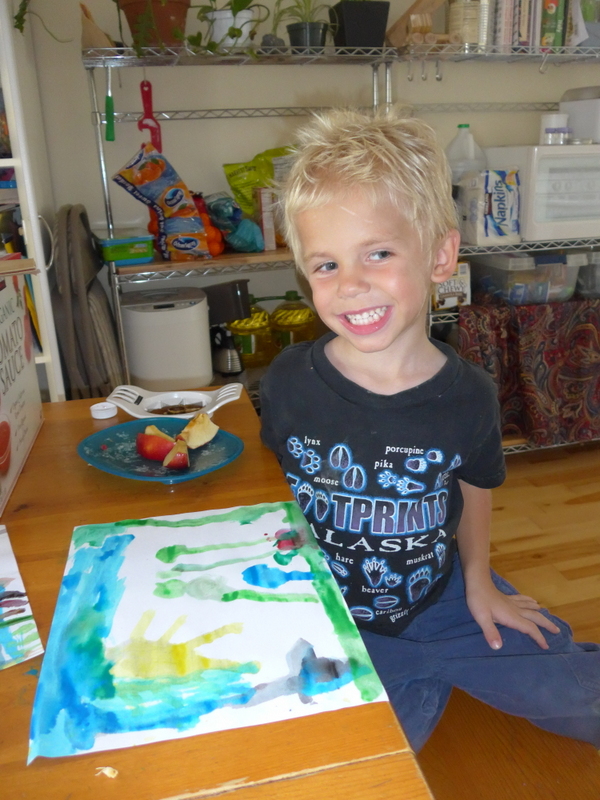 Zoë has figured out that DUPLOS make quite lovely finger puppets for her tiny little fingers. She likes to put a block on either hand and dance them around in the air: 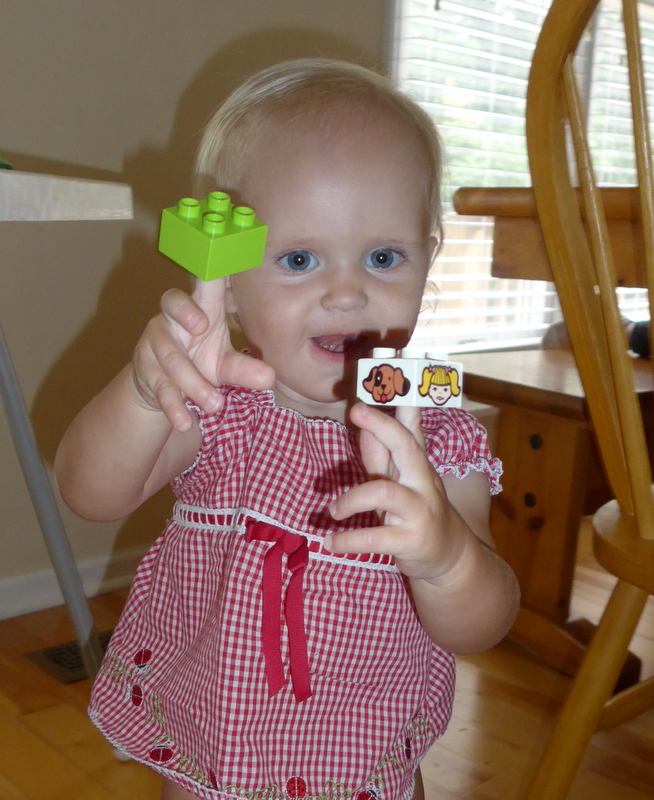 Here's an update to the question of whether I guessed the correct portrait for Miriam: I did. She came home a few days later with her self-portrait, sheepishly mumbling, "You were right. I was number thirteen." 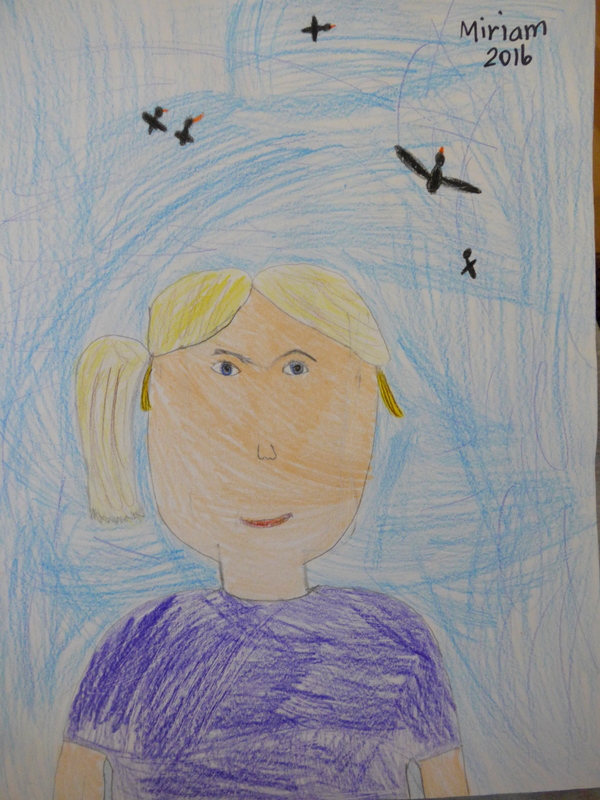 Andrew said, "That's so obviously Miriam. She even got her unibrow in there!"

Ever since I introduced her to Frida Khalo she's been more proud of her little unibrow than ever before (more power to her). 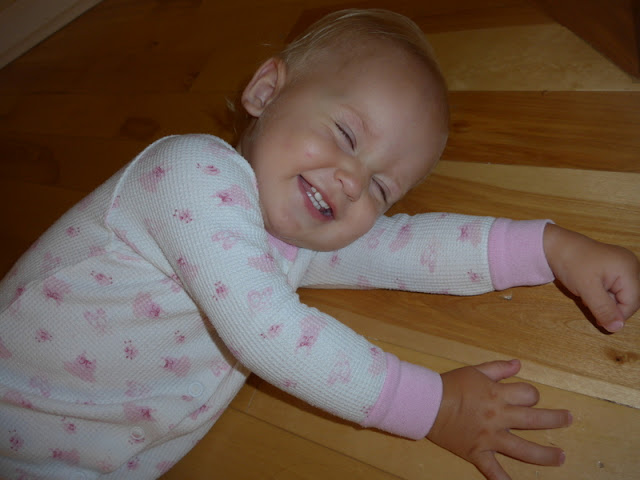 Zoë will obediently lie down, closer her eyes and pretend to go to sleep if you ask her to. When it comes to actually sleeping, however, it's a whole 'nother ball game.

I was sitting in my rocking chair, nursing Zoë, with all the three older kids yammering at me at once, so I had to take a picture. Rachel wanted tips on how to sew a crochet chain into a coaster, Benjamin wanted to show me how a rolled yoga mat makes a good cannon, and Miriam wanted me to play the fortune teller game she made during "marvellous Monday" at school. All at the same time. It was slightly overwhelming. I'm pretty sure I shooed them all away after I took this picture. 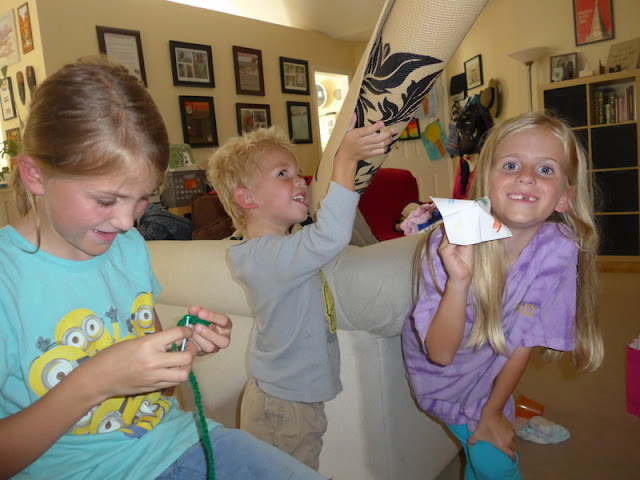 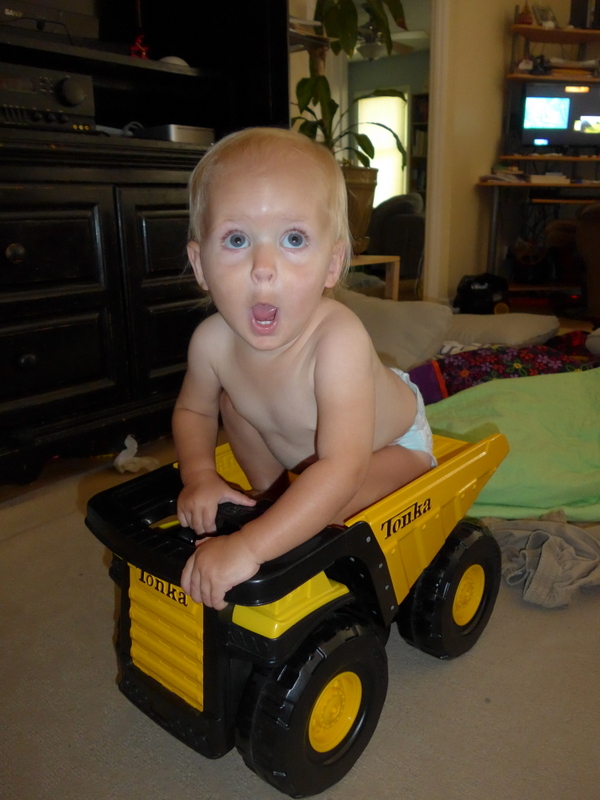 Benjamin drew this crab-mouse one day. He wrote "BEN" on it and then I helped him sound out "CRAB" and then Miriam flat out told him how to spell mouse because mouse is a silly word. 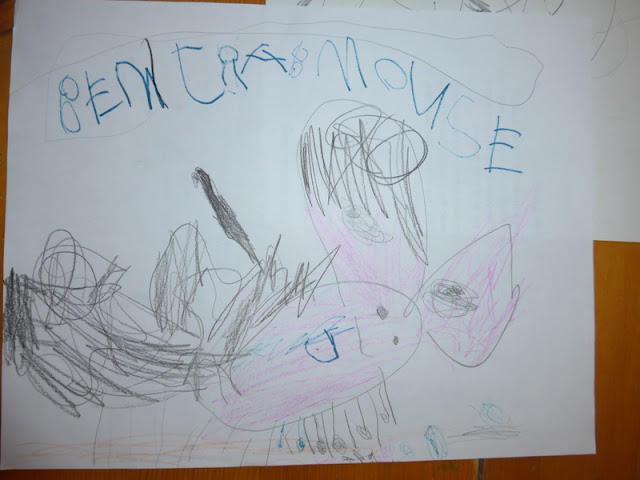 Meanwhile, Miriam drew this picture she titled "The 1950s." Her music program this year is "Off Their Rockers" and the kids are learning a number of rock songs from the 50s. This was her tribute to the decade. She really wants a poodle skirt to wear for her performance. We'll see what we can drum up. 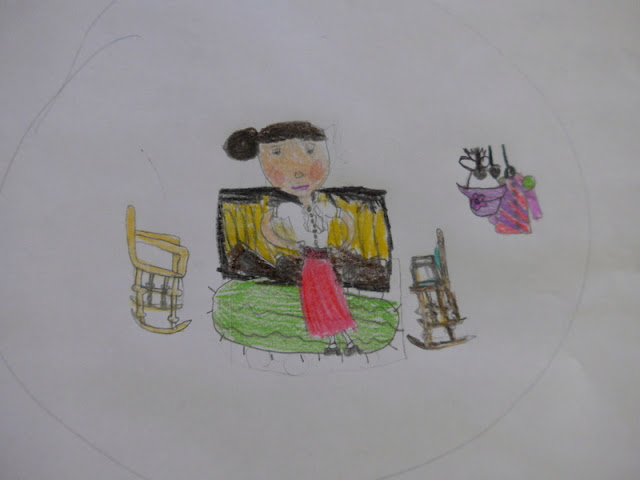 Here's Benjamin with his "construction hat" on. He often plays with dishes when he should be putting them away, even getting clean dishes out of the cupboard to take part in his games, essentially making more work for himself. Whatever floats your boat, Benji. 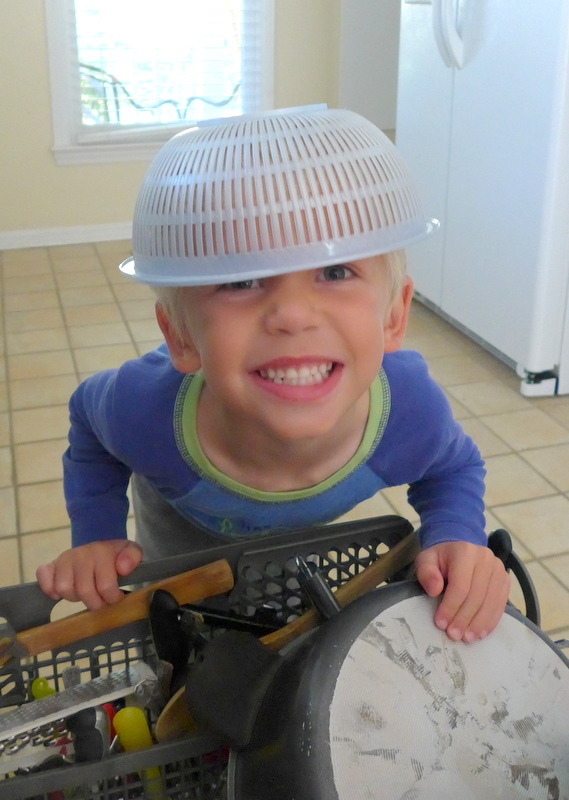 Benjamin found this box to play in (and by found I mean he emptied its contents all over his floor (it should be housing our stuffed animal collection)) and Zoë was jealous so we had to find a box for her to sit in as well. 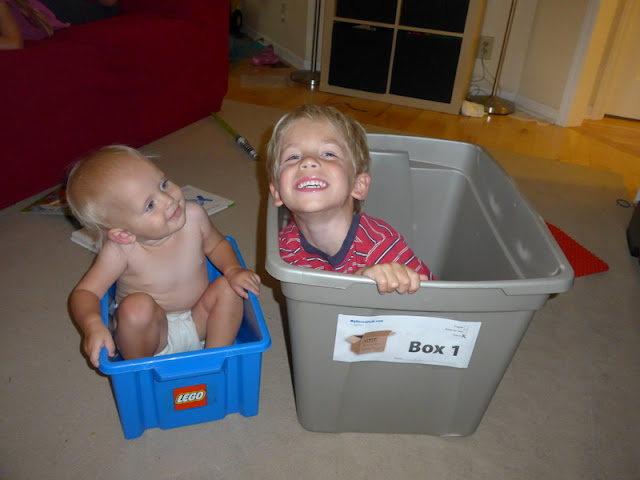 I love how she's staring up at him in this picture, probably thinking to herself, "See? Now I'm just like you!"

We recently rearranged the living room a little bit to make it more Zoë friendly. The poor girl has no place to call her own. She was supposed to share a room with Rachel, but really she's sharing a room with us and Rachel's got that room to herself. Rachel doesn't ever want Zoë in there mucking with her stuff, which I understand. Benjamin and Miriam don't really want her in their room either. Besides, they have all sorts of choking hazards squirrelled away in there. And while she might share sleeping quarters with Mom and Dad, our bedroom isn't really great for her to just hang out in, either.

So I moved a little bookshelf into the living room and put some board books and baby-friendly toys on it. I also moved the "little" LEGO bins (the ones full of choking hazards) into Miriam and Benjamin's room and instead brought the DUPLO out into the living room. I consolidated our block collection and managed to fit three bins of DUPLO into one of those black boxes you can see behind the children.

I thought it was pretty amazing that we could fit three containers in one box!

After a few days of playing in the living room with DUPLO we brought out our final box because there were some pieces Benjamin was looking for but couldn't find. Much to my amazement, when we cleaned up at the end of the day all the DUPLOS fit into that one black box. It seemed impossible to fit so many DUPLOS into one box, yet there were no more blocks to be found on the floor. They were all in the box. The magical TARDIS box of wonder!

Later, as I was vacuuming, I noticed a couple pieces of LEGO under the couch, so I lifted one end of the couch and called the children over to get everything out from under it. They scraped an entire bucket's worth of misplaced DUPLO from under the couch!

Perhaps that black box wasn't quite as magical as I thought.
Posted by Nancy at 10:09 PM