This little girl and toilets! She lives to climb into her own personal whirlpool. She lies in wait outside the bathroom door, waiting for someone to slip up and let her slide in behind them or—even better!—forget to close the door. She's fast—faster than you'd probably believe—and by the time the words "Where's the baby?" have left your lips she's already managed to take the plunge. 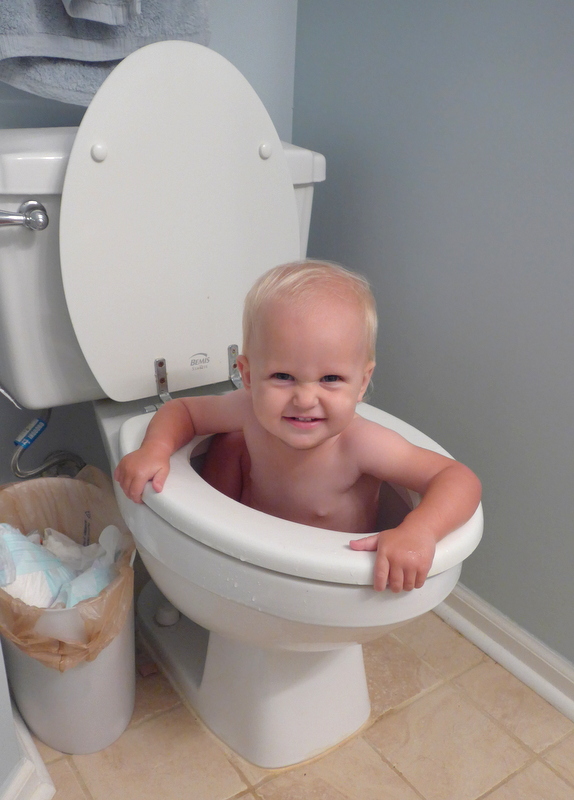 Hopefully this will be the last picture we take of her like this. My friend Vera kindly passed her toilet locks on to us. I have yet to install them, but I'm hopeful they'll help. I'm not quite sure how they work but we'll get them on...sometime...and see how things go from there.

She's been loving attending nursery at church and has grown especially fond of the game Ring Around the Rosie. I know we've played this game at the pool several times but I don't think she realized it was also a dry-land game. She loves it.

Last night she was having trouble going to bed and was still up and wide awake at 1 am (which isn't at all unusual for her, actually). She seemed to be craving some attention from Daddy, so I suggested that they play Ring Around the Rosie together. She got really excited and grabbed his hand. He tried to grab her other hand but she wouldn't let him and kept holding her hand out to me, insisting that I play as well. So I did because, you guys, it's Ring Around the Rosie. Best game ever.

Soon Andrew was too dizzy to continue so after we all fell down he didn't get back up again, despite Zoë's best efforts. She tugged on his hand and grunted. She heaved and pulled. Daddy wasn't budging.

Zoë took a step back, lowered her hands to her thighs and started patting her legs.

Daddy jumped up to play again—because how could he not? It's Ring Around the Rosie. Best game ever.

We played a few more times, giggling over Zoë's zealous game-playing antics, until we heard a doorknob jiggle. We turned and saw Benjamin's head poking out into the hallway—and he did not look pleased.

"Will you guys stop doing that?" he chided. "Some of us are trying to sleep!"

Then he slammed his door and presumably went back to bed (only to reappear a few minutes later to ask if he could have a drink before going back to sleep). Andrew and I laughed so hard for so long. Who'd have thought that boy would ever utter those words? It wasn't so long ago that he was the kid awake at all hours of the night (I just found a little video of him singing Five Little Monkeys Swinging in a Tree at o'dark-thirty at night). He's only been sleeping through the night for about a year now and has recently begun making huge strides at growing up. 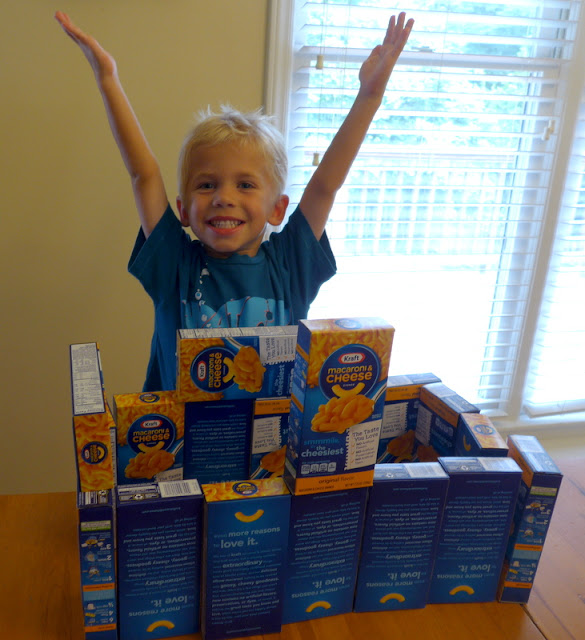 This is a picture of "London Castle" that Benjamin built out of macaroni and cheese boxes (we bought a case on sale at Costco in case you, like all our children, were wondering why we bought so many boxes). It's in England. Benjamin recently figured out how to say els, and while he doesn't use them all the time, when he does they are very liquid, long and drawn out. Llllondon. Engllllland. Blllllue. Llllillly. It's charming.

He has (knock-on-wood) started staying dry at night, either waking up to use the bathroom in the middle of the night or sleeping "all the way through the night without peeing!" I read in the papers the doctor's office gave me that he's supposed to be proficient in the bathroom at this age—taking care of his own bowel movements and so forth—so we've started teaching him about the proper use of toilet paper. I'm sure he would have mastered this skill earlier, but he's been so difficult to toilet train that we simply hadn't ever gotten around to addressing things like how many squares of toilet paper is an appropriate number to use. We aim for two at a time.

The mere fact that the second thing out of his mouth is "and not in my pants" is telling, isn't it? Sometimes the news is worse, something along the lines of, "and there's just a little smear!"

"Go ahead and try wiping," I'll call out.

"Can you teach me how again?"

"Five is starting to be too much."

Seriously not rocket science. He'll have this mastered by kindergarten, I'm sure, which is probably a good thing.

He's also making progress in his reading lessons and gets really excited when he reads anything. So far he can read things like "mat" and "rat" and "sat" and that's about all. I'm less worried about reading at this point than I am about bathroom readiness. Going a whole day without Mom there to (a) remind him to go and (b) coach him through the process? That's going to be a big step.

Luckily we have a full year to get him ready.
Posted by Nancy at 12:01 AM