I have been making cakes for several years, with ever increasing frequency. It has been both fun—a creative outlet and labour of love—and frustrating. I have hated crumb coats. So much.

While necessary for keeping the cake glued together, it's just such a frustrating process to get the crumb coat on. My cakes have always torn apart, no matter what I've done to keep them together. I always end up close to tears, with thick, thick icing covering up a multitude of mistakes. And I've never understood why because I have been through dozens of tutorials on cake decorating.

"I have here a batch of Wilton buttercream," the host of the tutorial will say. "It's such a perfect recipe for icing cakes—light and fluffy. We're just going to put on a quick crumb coat...*spin, spin, spin*...and done!"

And that's literally how long it takes for them to ice their cake and I've always been like HOW?!?!

Because I have made up dozens of batches of Wilton buttercream and it's always been thick and glue-like and then I've taken hours sometimes to get a decent crumb coat on. And then I have to make another batch of icing to do the actual design and then I end up with far too much icing on the cake.

I've researched how to make this process easier for myself (with poor results).

Freezing your cake layers can apparently help keep them from crumbling, but that's never helped me very much. In fact, the last time I froze my cake layers (for Zoë's cake), my icing seemed to freeze on the cake. I could not spread it at all! It was horrible! It was spreading more like play dough than like fluffy frosting.

I was not looking forward to having to make another cake so soon after that particular disaster. But, alas, Benjamin's birthday falls soon after Zoë's and so I found myself making another cake anyway.

And then, when I was looking up the recipe for Wilton buttercream—which to my credit touts itself as being, "softer and more spreadable than most icings, making it perfect for icing cakes and cupcakes," and also mentions that it can be stiffened " if your goal is to decorate your cookies or cakes with pretty flowers or piped messages"—I saw a link for "icing consistency" under "tips and techniques."* So I clicked on that and watched the tutorial.


As it turns out, the Wilton buttercream base recipe is considered a stiff recipe (and is not soft or spreadable) and is good for piping roses and so forth. To get it to be soft and spreadable you have to add two teaspoons of liquid per one cup of prepared icing (one recipe yields two cups, so that meant my recipe was lacking four teaspoons of liquid)!

I would like to know (A) how it took me twelve years of cake decorating to learn this and (B) why it doesn't just say this on the recipe itself??!?

"Softer and more spreadable," my foot.

After adding extra milk to my icing, it took me all of five minutes to get a crumb coat on Benjamin's cake and I can't stop thinking about how much better my life is going to be because of this discovery.

Benjamin wanted a Roselina cake—from Mario Kart—but I wasn't quite sure how to pull that off, specifically, so we went with a general Mario Kart theme. A friend of mine had made a Mario Kart cake for her son a couple of years ago and she had a set of little race cars that she put on the cake. I asked her if I could borrow them and she graciously dug through her toy box to find them all, which made this cake so much simpler.

She did not, however, have a Roselina car, which I was sure Benjamin would find disappointing.

Rachel and Miriam had a blast making little decorations out of fondant—mushrooms and banana peels and turtle shells and mystery boxes and power-up stars. They help pipe some grass onto the cake as well. 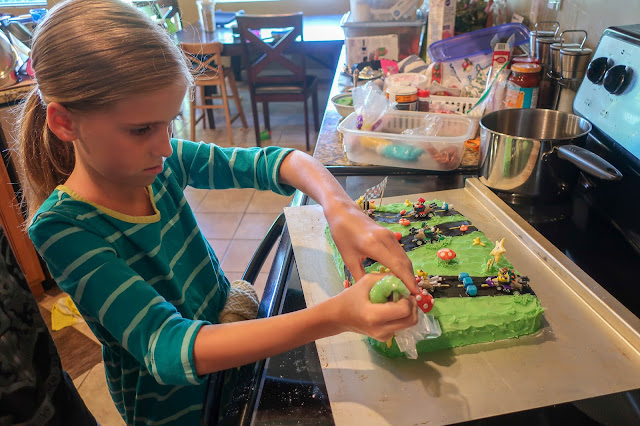 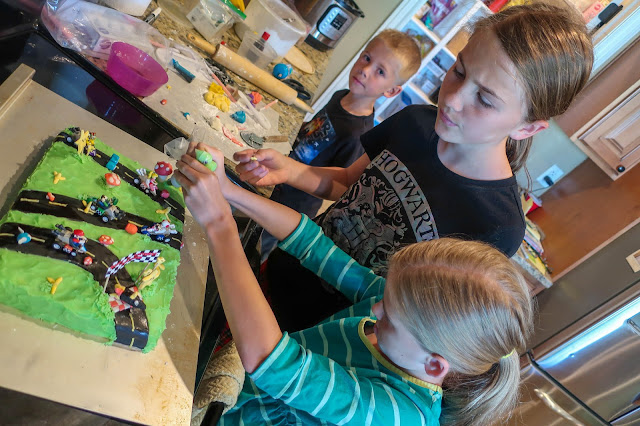 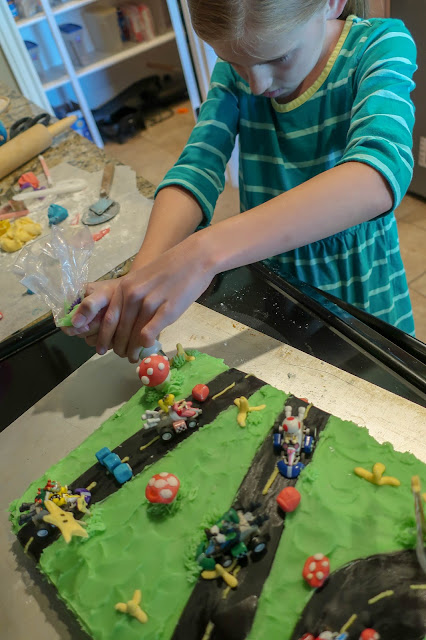 As we suspected, Benjamin was a little disappointed that there was no Roselina car. He suggested that we do the cool trick of making a bullet out of fondant and pretend the bullet is Roselina. So Miriam made a Roselina bullet, which is zooming across the finish line, and Benjamin was very pleased with the results (he often "gets" the bullet when he plays Mario Kart, anyway (it's not really an honour; it means that you're so far behind everyone else that the algorithm gives you the bullet (assuming you can hit a mystery box) so that you have half a chance of finishing the race before your friends/siblings get bored and leave)).

This picture is focused on Mario, but I think you can kind of see the Roselina bullet crossing the finish line: 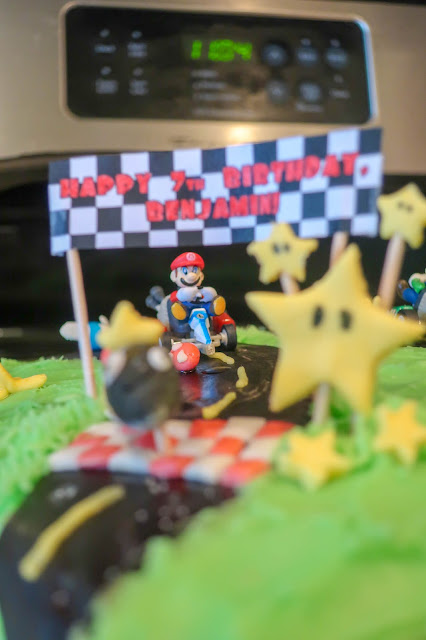 Benjamin was excited to have Naanii, Bumpa, Aunt Linda, and Uncle Trevor come over for cake. Here he is with Naanii: 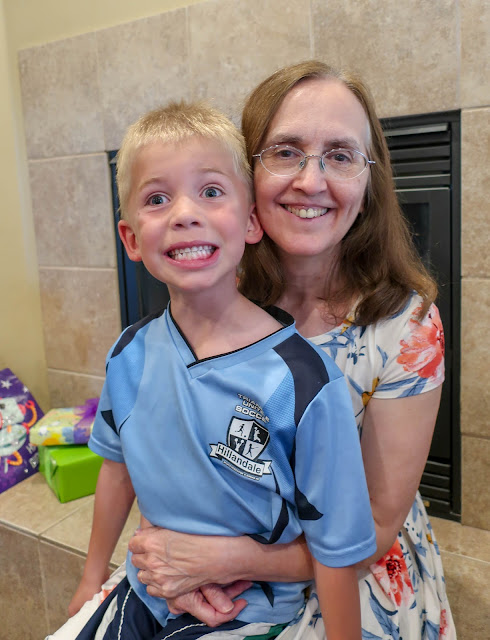 She was afraid of looking tired in the pictures because she felt tired on Monday, but I don't think she looks too tired (besides, anyone looks tired next to Benjamin). 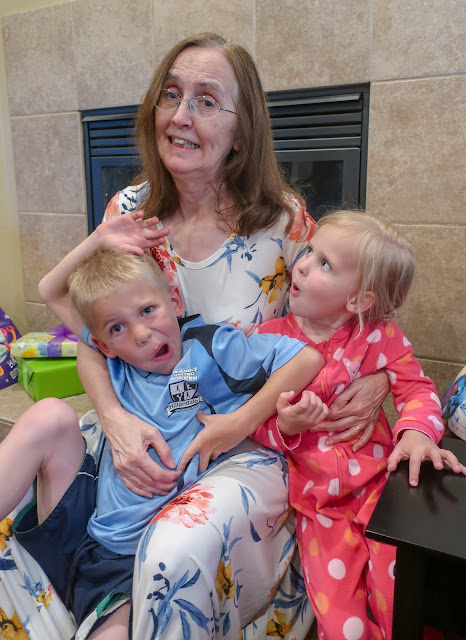 Miriam made Benjamin a little tool set out of popsicle sticks, and a lovely card with Roselina and Princess Peach: 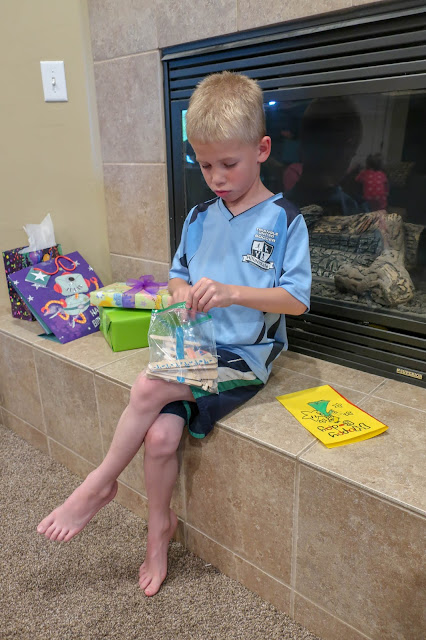 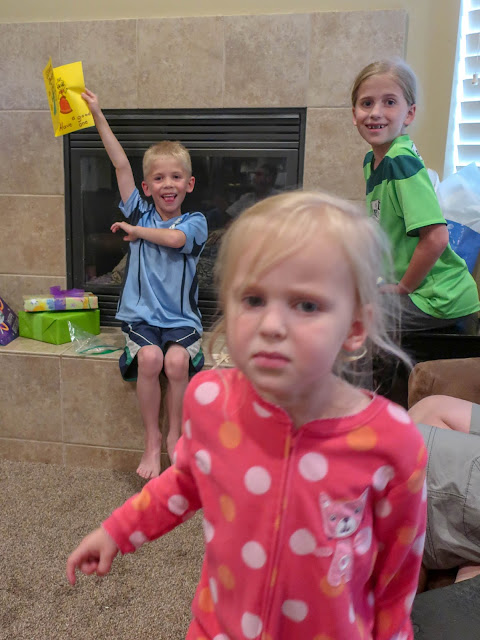 We snagged some roller blades for Benjamin (off a neighbourhood swap meet page; because we're cheap like that) and he was thrilled because he's been asking for roller blades for ages. He has yet to figure them out, but he keeps trying. 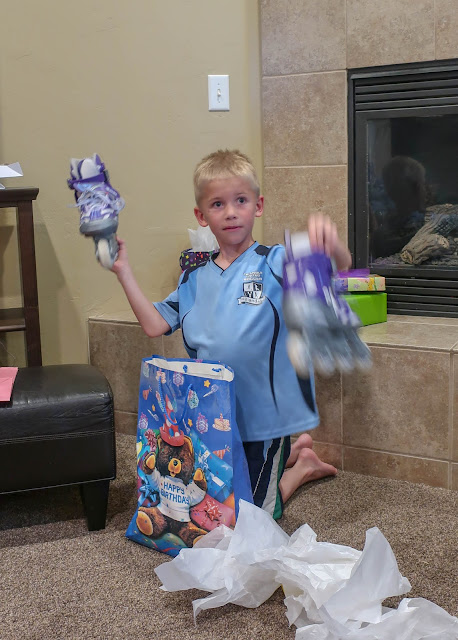 Here's Grandpa confessing to Uncle Trevor how he cut his power cord with the hedge trimmers: 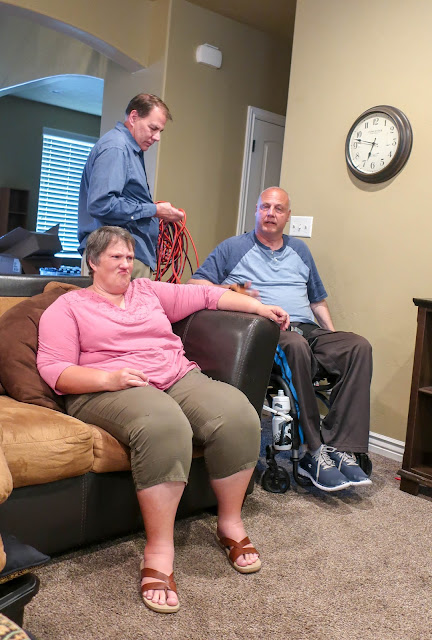 Here's Benjamin looking at a build-your-own microscope that Naanii and Bumpa got for him. 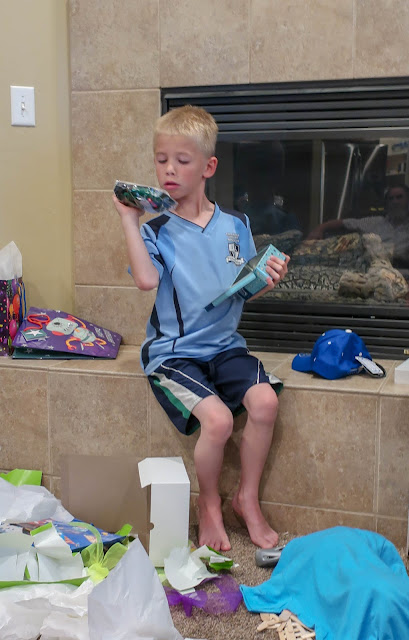 And here he is wearing his new BYU hat (also from Naanii and Bumpa):

The pictures aren't very good because I had a squirmy baby on my lap while I was trying to take them. Later he would be a squirmy, screaming baby because right before cake he climbed into his high chair by himself...and then fall out of his high chair and flat on his face.

Here are some shots of the cake that Andrew took before we sang to Benjamin: 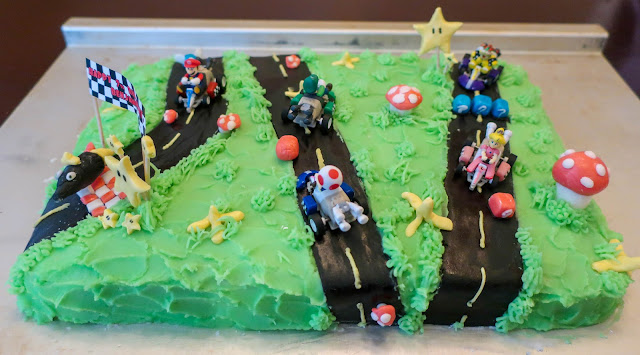 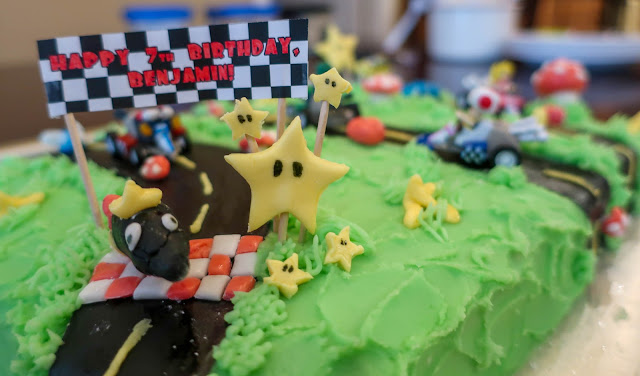 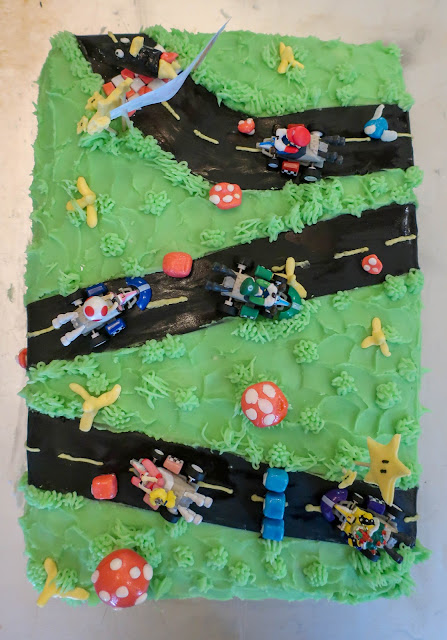 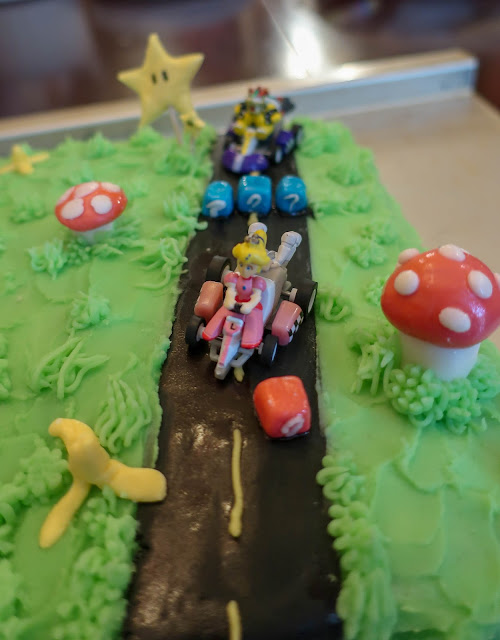 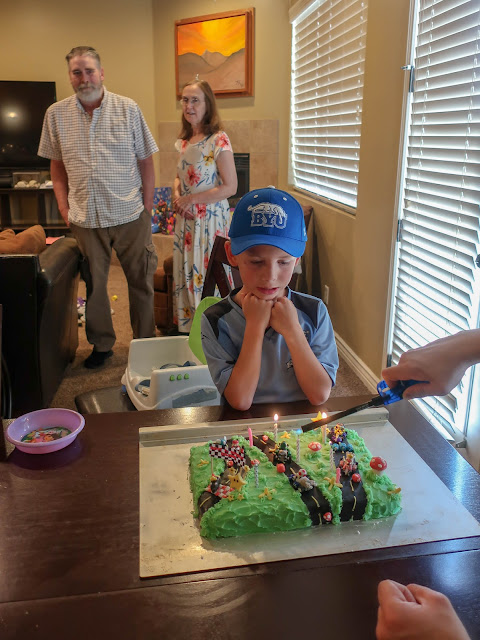 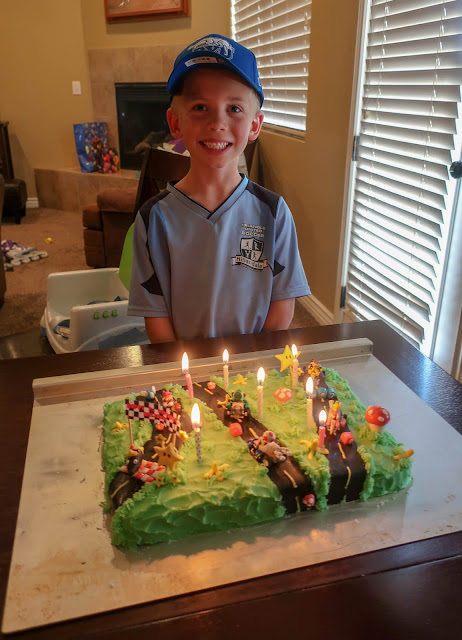 Here he is blowing out the candles: 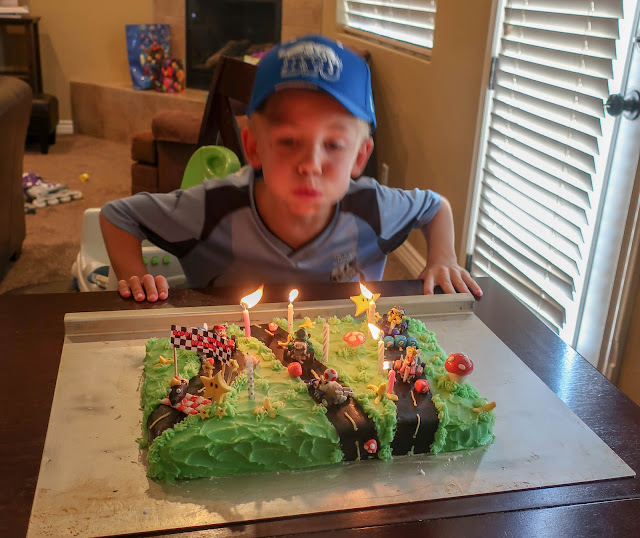 And here he is proudly admiring his ability to create a gusty enough gust to extinguish so many candles (how is this child seven?!): 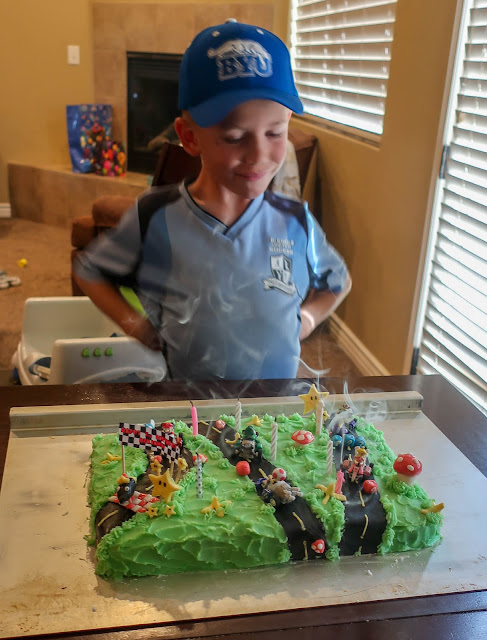 Oh, funny story: Andrew put one of the candles a little too close to the banner on the cake and lit it on fire while he was lighting the candles so he had to quickly blow them out and relight them before the whole thing went up in flames. Here's a close up of the singed banner: 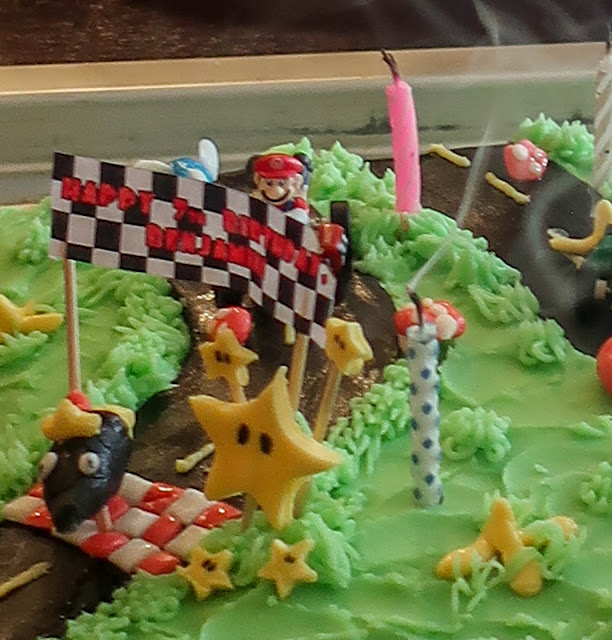 I think it was a happy birthday for Benjamin. We went swimming in the afternoon and came home to a lovely dinner of orange chicken (made by Andrew while we were at the pool). And then yesterday he got to go to a baseball came with Grandpa and Karolla in Salt Lake.

It was a pretty fabulous couple of days for him!

* And now I'm seeing a note in the recipe that says, "Note: This recipe is for stiff consistency buttercream, which is excellent for piping decorations like flowers. However, it will need to be thinned for icing cakes and borders." So I'm confused about when this showed up and also why the description would suggest stiffening it up for decorating? Surely we can all agree that this is just confusing...
Posted by Nancy at 1:35 PM