After dinner I asked Benjamin to unload the dishwasher so that I could do the dishes that had accumulated in the sink today. He complained for a bit, but I told him I would work along side him—he could do the low stuff (kid dishes and pots, pans, and tupperware) and I could do the high stuff (glass and sharps, mostly). He thought that was a pretty good deal but was still being a bit of a stinker.

And then I turned on some music—OK Go—and suddenly he didn't want to leave the kitchen.

I completely expected him to run away the minute the dishwasher was empty but instead he turned around and started rinsing dishes and loading them into the dishwasher! He did the dishes entirely by himself! Without being asked!

(Don't mind the shocked look on his face; I was rather shocked myself.) 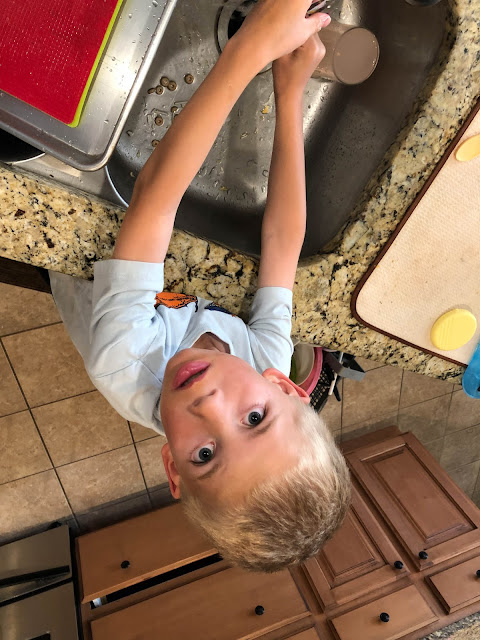 It was such a lovely gift (that I hope keeps on giving).

Part of the magic may have been that he couldn't get enough of OK Go, so when we're settling into our new routine in Georgia, perhaps we'll have the child whose dish night it is choose the clean up music (because—brace yourselves—you're all getting a dish night).
Posted by Nancy at 2:57 AM