We took a break from our furious packing/cleaning/sorting routine this morning to visit Uncle Trevor in the hospital. He's having some rather typical quadriplegic complications and has been in the hospital since Monday.

Yesterday we had a farewell party, which we awkwardly ended up throwing for ourselves (even though it didn't start out that way) and which I will write about in the near future, I'm sure. Right now I'm just trying to do a speed-write while Andrew is doing the final copy edits for an article of his that will be published soon. Anyway, we ended the evening playing hand-and-foot until late and we were cracking some pretty terrible jokes, which we knew we had to go share with Uncle Trevor.

He seemed to enjoy having us there, though he was also pretty tired.

The kids were mostly fascinated by the view from his window on the 7th floor. The hospital (Utah Valley Hospital, where Benjamin stayed in the NICU as a newborn and where Alexander was born (and where Andrew was born as well)) is undergoing some extensive renovations, so the kids were watching the construction workers demolish the tower opposite us piece by piece. 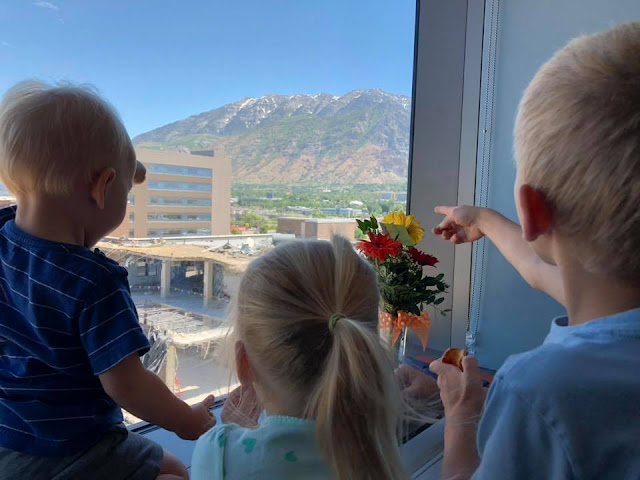 They can't take the tower down all at once because it's too near the rest of the hospital, so I don't know how long it's going to take to raze it but I imagine it will take a very long time.

We're hopeful Uncle Trevor will be home from the hospital soon, or at least out of the hospital. He may have to go into a care facility for a while since he has quite an extensive recovery in front of him, but he's doing okay, all things considered (some very scary, stomach-knotting words were tossed around (like, sepsis; he has sepsis (among other issues)) but he seems to be doing well).
Posted by Nancy at 11:19 PM