Today I spent practically all day wrapping presents (with the help of various little elves, some more helpful than others). When I'm hoarding presents in my closet I always feel like there are so many (and, I suppose, there are, technically), but when I get them out and divide them into piles for each child...suddenly there doesn't appear to be very much at all and I realize how terrible I am at presents.

First of all, Andrew buys most of the presents around here. So that in itself is telling.

Second of all, Zoë's pile had...underwear...and a little set of LEGO.

I picked out the underwear at Target the day before Phoebe was born while I was waiting around for fifteen minutes after my COVID vaccine. That's when I did my little contribution to the Christmas present shopping (that Target run and a little online shopping).

So Andrew ran out to the store to find a few more things for her. He got all the practical things on my list ("Oh! She needs new socks, too!") but also remembered to grab a few fun things (he's better at fun things than I am).

Yesterday we made gingerbread houses. And by "gingerbread" I mean graham cracker. And by "we" I mean Andrew, Miriam, and Rachel constructed the houses earlier in the day while Phoebe and I napped and then we gathered for family night to decorate them but I mostly just held and fed Phoebe while Andrew and the kids decorated their houses.

So it worked out pretty well.

Here are Rachel and Benjamin making sure things are all set up: 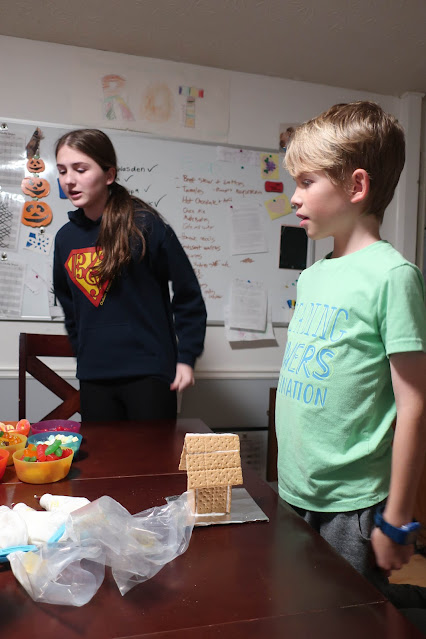 Here's Zoë sneaking some candies to munch on before we've even begun the decorating process: 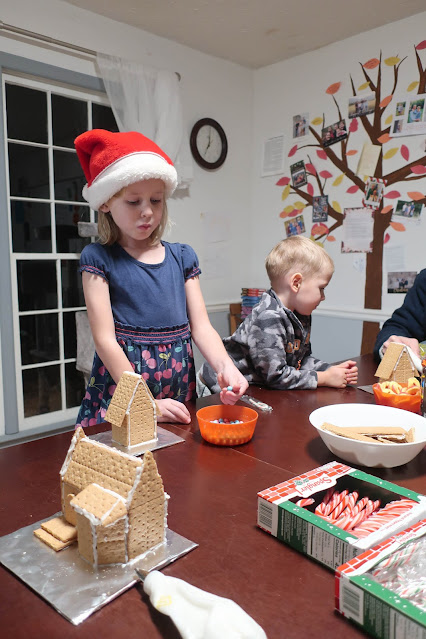 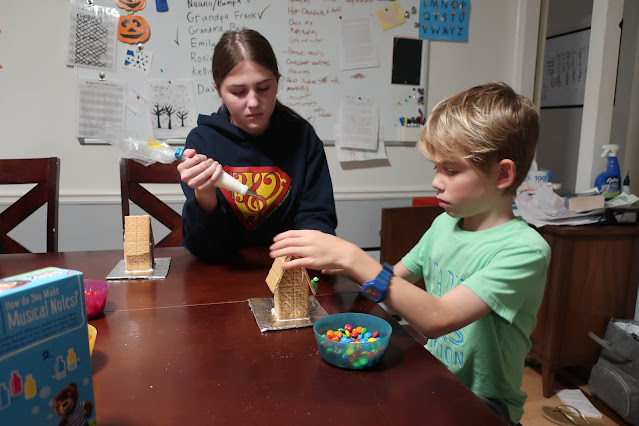 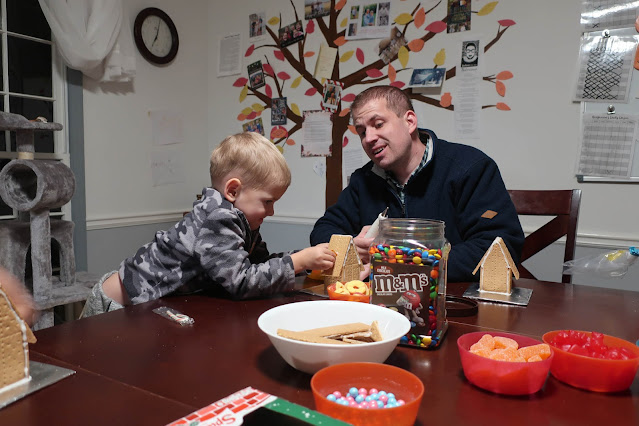 You may have noticed that these boys both have fresh haircuts. In the spirit of me not doing anything anymore, Miriam gave them haircuts (to be fair, I helped walk her through the process) while I was busy with Phoebe.
Andrew wanted a haircut the minute family pictures were over, so he got a haircut on Friday night.
Alexander woke up on Sunday morning so upset about how his hair kept "fludging" his eyes (his words) that he convinced us he needed a haircut to match Daddy's. So now they're haircut buddies.
My mom was rather sad about his haircut because she likes it a bit longer (and I do, too, so I've been experimenting with more "advanced" haircuts over the course of this pandemic), but Alexander assured her that it will grow back! So then she felt better.
He's just happy to no longer have fludging hair (whatever that is).
Here's Miriam: 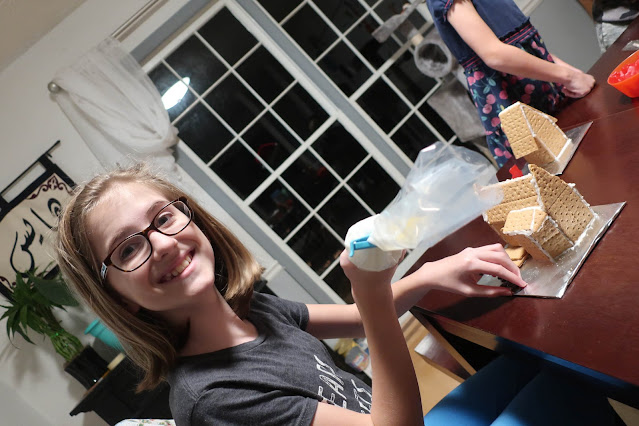 She made a very customized house with a bay window and a front porch and everything.
The kids kept getting into the candy so much that I eventually suggested they all just suck on a candy cane—you can't eat handfuls of M&Ms while you're sucking on a candy cane! 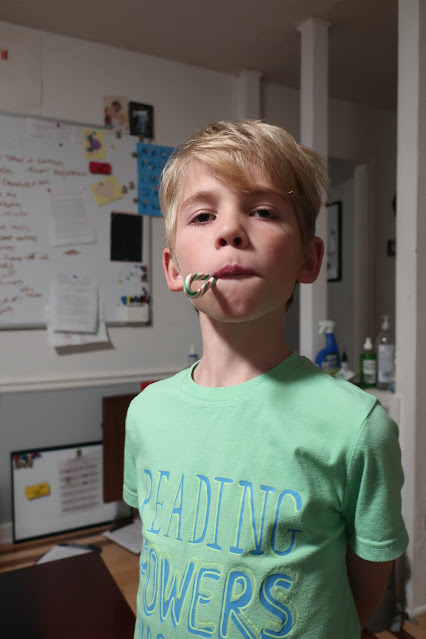 At least, that was my thought. The kids proved that theory wrong, of course.
Here's Alexander popping a marshmallow into his mouth. He was very fair throughout the whole gingerbread house process, living by a "one for the house, one for me" rule. 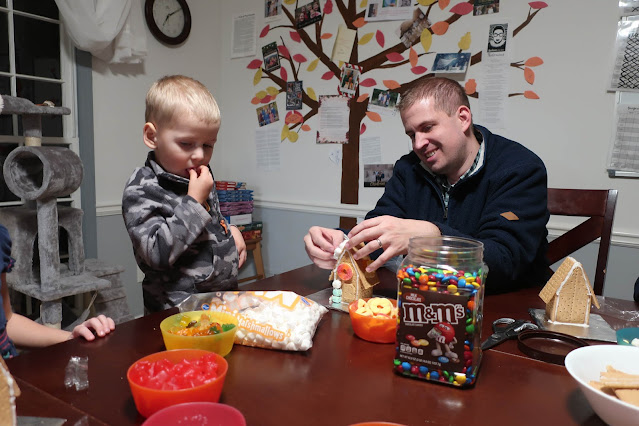 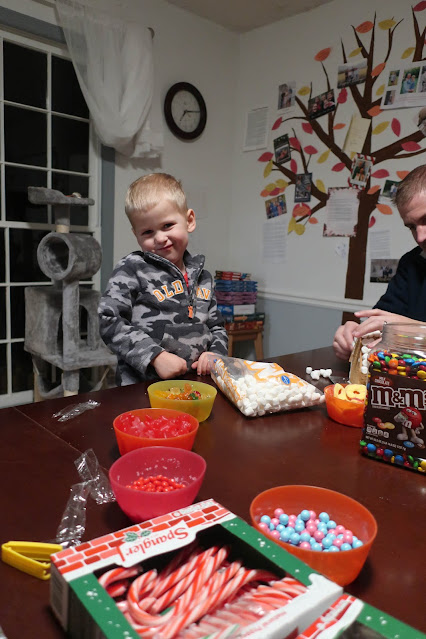 Benjamin took quite a lot of care creating a pattern of red and green on his roof (which was lovely to see because he doesn't often have a lot of patience for things like that): 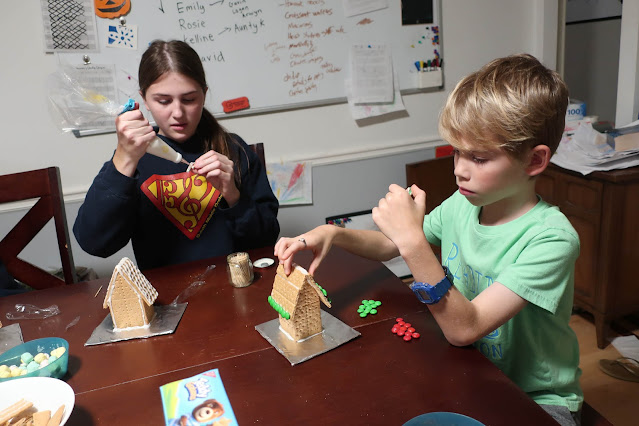 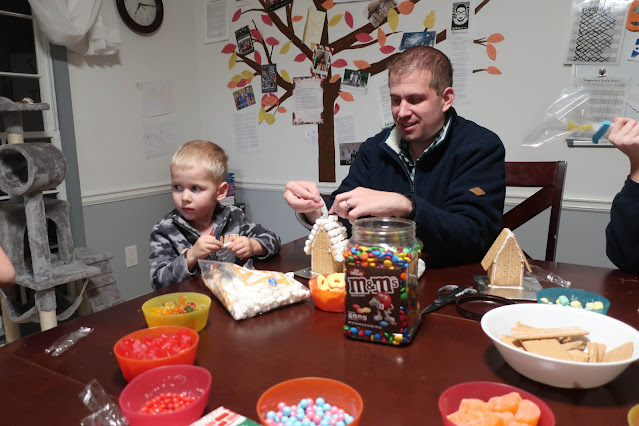 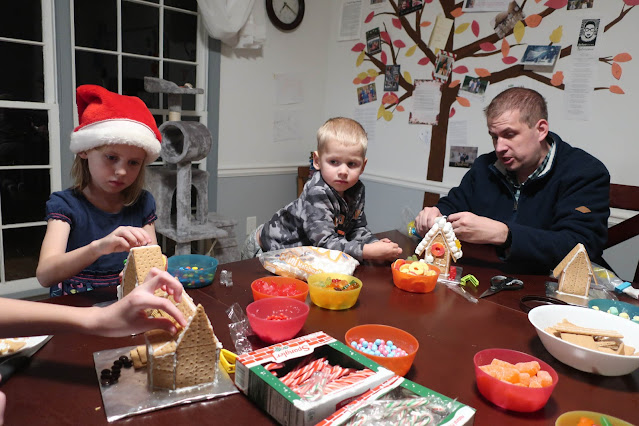 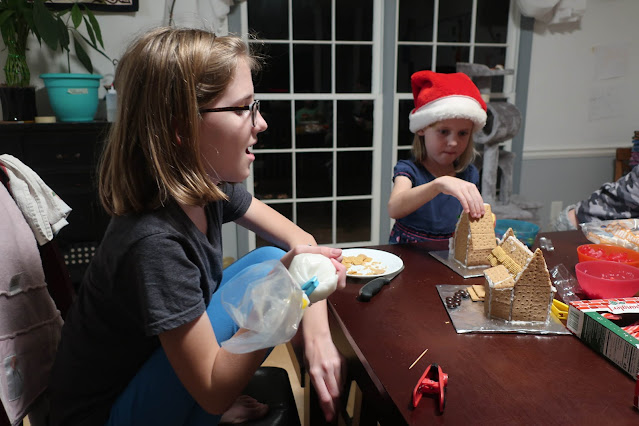 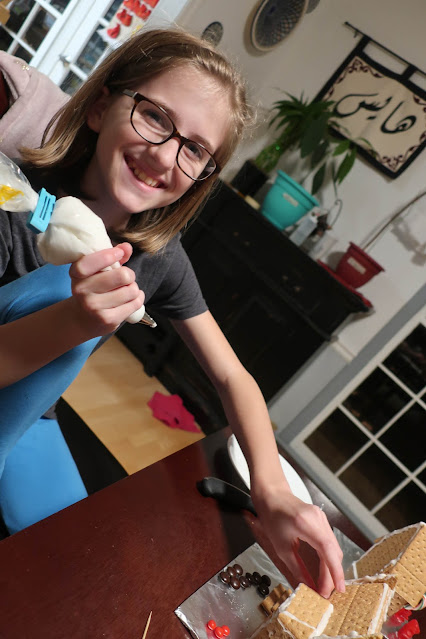 Here you can see his house taking shape: 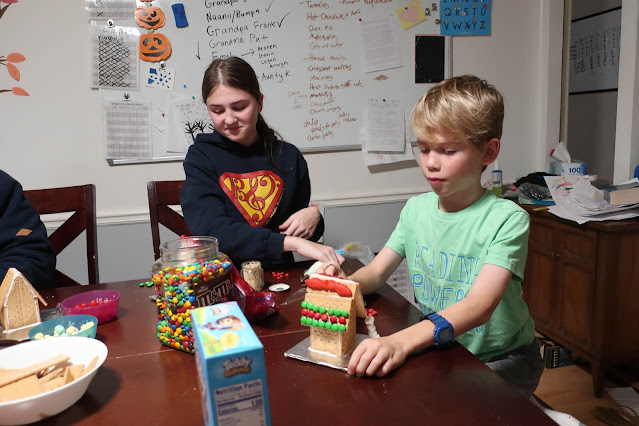 And here's Alexander posing by his finished house: 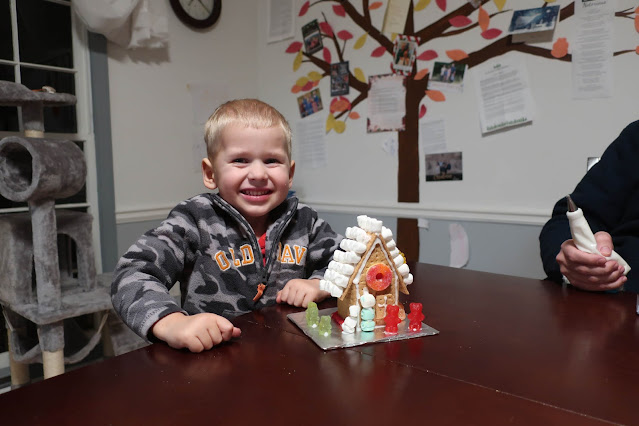 We had to cut him off from the candy so we sent him to get his pyjamas on. He selected footie jammies, however, which he still struggles to put on by himself, so he came back down to the dining room to ask for help from Daddy, who still had an icing bag in his hand.
Andrew turned to Alexander and said, "Okay, let's get these on you," and just about started squirting him with icing before he caught himself. It's possible both he and I are suffering a bit from sleep deprivation.
The picture below is a reenactment of the icing/pyjama mix up: 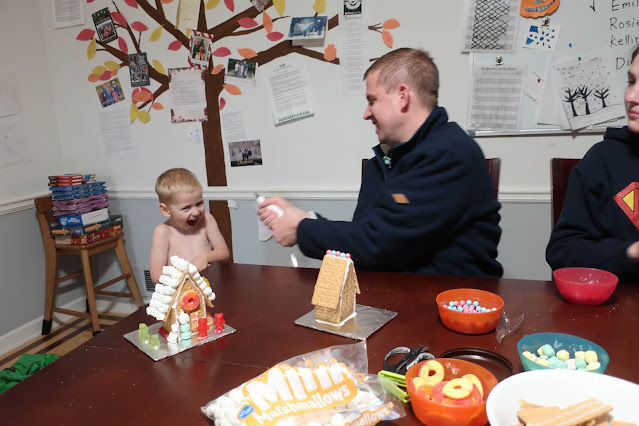 Alexander thought it was pretty funny!
Here's a shot of Rachel's house coming together and Benjamin's house, which is almost finished: 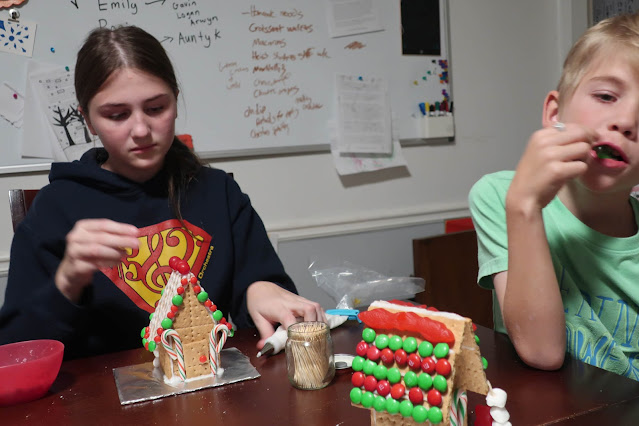 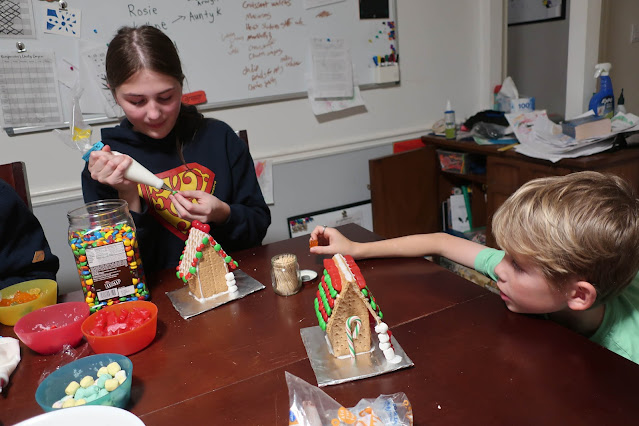 These two worked rather well together, which was rather nice to see! 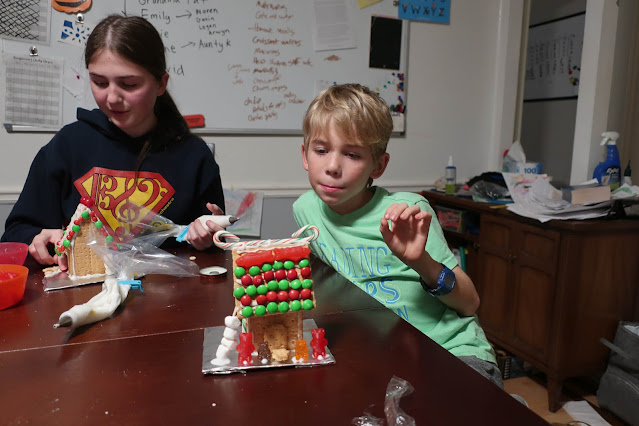 Here's Zoë with her finished house: 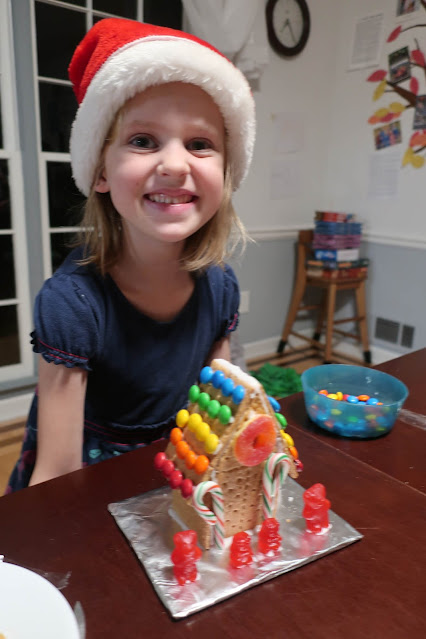 I thought her rainbow roof was lovely. She was also the first to create a family of candy bears for her house (cinnamon bears for the parents and gummy bears for the children. Cinnamon bears are a candy that I will never be able to wrap my head around (I think they're kind of gross) but I guess it's a thing that exists. I'd never heard of them before moving to Utah...are they a Utah thing? (Looks like they are a Utah thing, though you can buy them outside of Utah for sure).

Here's Zoë in her pyjamas but back to add a few details to her gingerbread house (which wasn't so finished after all). 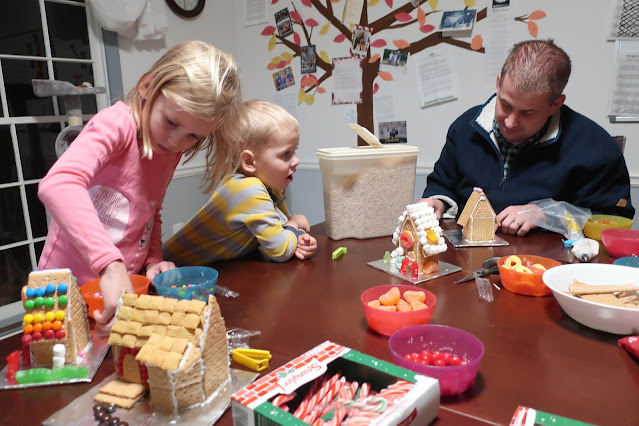 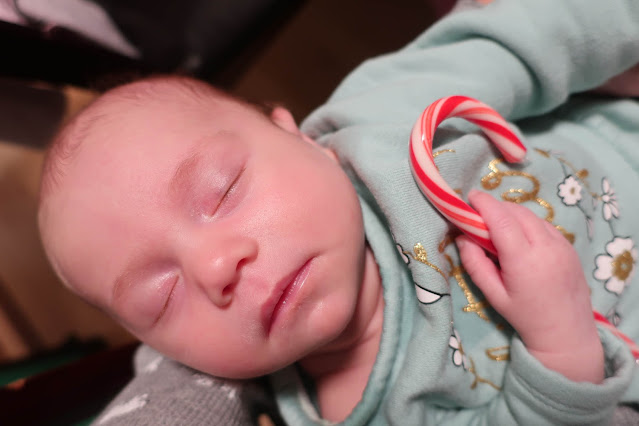 It was lovely to squeeze in a bit of Christmas magic into this week. Gingerbread houses is something I told the kids we might have to let slide this year (on account of Phoebe) so I was a little worried when Andrew dove into this project...but they really did it all on their own (all I did was watch).
I still need to take pictures of everyone's finished houses. The girls stayed up a little later to finish theirs while I was getting little people into bed. But they cleared off the credenza in the dining room (which isn't supposed to be in need of clearing off since technically nothing is supposed to be placed there...but which is always in desperate need of being cleared off) and created a lovely gingerbread village.
Posted by Nancy at 12:53 AM