I finished our Christmas poem last night and, as Andrew pointed out, that was my last big project of the year! So now I should be able to relax and enjoy the holidays (and blog a little more). You can read it below (or download it here). Enjoy! 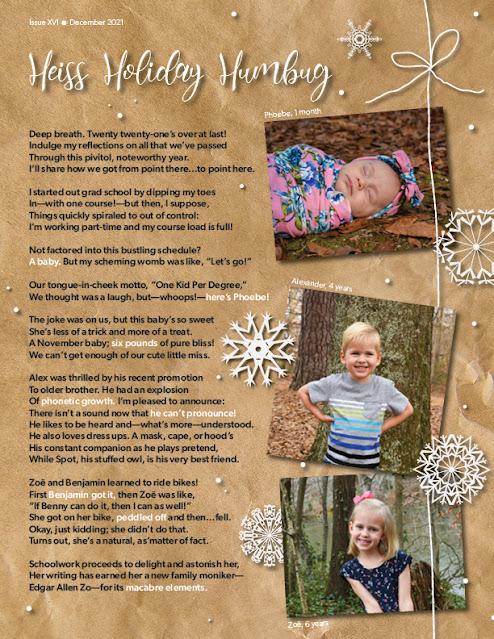 Indulge my reflections on all that we’ve passed

Through this pivitol, noteworthy year.

I’ll share how we got from point there...to point here.

I started out grad school by dipping my toes

In—with one course!—but then, I suppose,

Things quickly spiraled to out of control:
I’m working part-time and my course load is full!
Not factored into this bustling schedule?
A baby. But my scheming womb was like, “Let’s go!”
Our tongue-in-cheek motto, “One Kid Per Degree,”

We thought was a laugh, but—whoops!—here’s Phoebe!

The joke was on us, but this baby’s so sweet

She’s less of a trick and more of a treat.

A November baby; six pounds of pure bliss!
We can’t get enough of our cute little miss.
Alex was thrilled by his recent promotion

To older brother. He had an explosion

There isn’t a sound now that he can’t pronounce!
He likes to be heard and—what’s more—understood.

He also loves dress ups. A mask, cape, or hood’s

His constant companion as he plays pretend,
While Spot, his stuffed owl, is his very best friend.
Zoë and Benjamin learned to ride bikes!

“If Benny can do it, then I can as well!”
She got on her bike, peddled off and then…fell.
Okay, just kidding; she didn’t do that.
Turns out, she’s a natural, as’matter of fact.
Schoolwork proceeds to delight and astonish her,
Her writing has earned her a new family moniker—
Edgar Allen Zo—for its macabre elements. 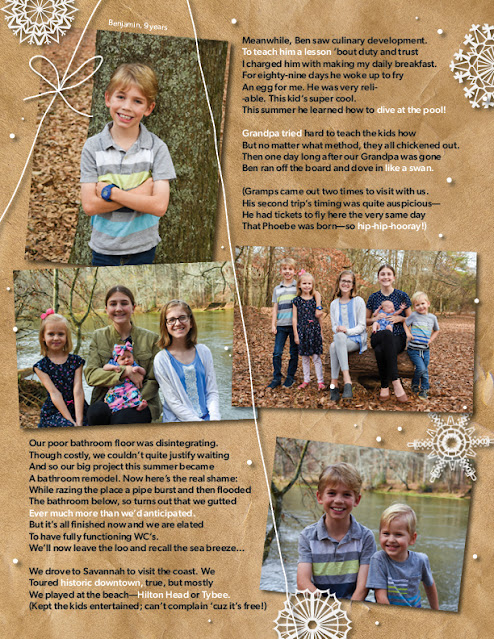 To teach him a lesson ‘bout duty and trust

I charged him with making my daily breakfast.

For eighty-nine days he woke up to fry
An egg for me. He was very reli-
-able. This kid’s super cool.
This summer he learned how to dive at the pool!
Grandpa tried hard to teach the kids how
But no matter what method, they all chickened out.
Then one day long after our Grandpa was gone
Ben ran off the board and dove in like a swan.
(Gramps came out two times to visit with us.
His second trip’s timing was quite auspicious—
He had tickets to fly here the very same day
That Phoebe was born—so hip-hip-hooray!)
Our poor bathroom floor was disintegrating.
Though costly, we couldn’t quite justify waiting
And so our big project this summer became
A bathroom remodel. Now here’s the real shame:
While razing the place a pipe burst and then flooded
The bathroom below, so turns out that we gutted
Ever much more than we’d anticipated.
But it’s all finished now and we are elated
To have fully functioning WC’s.
We’ll now leave the loo and recall the sea breeze…

We drove to Savannah to visit the coast. We

We played at the beach—Hilton Head or Tybee. 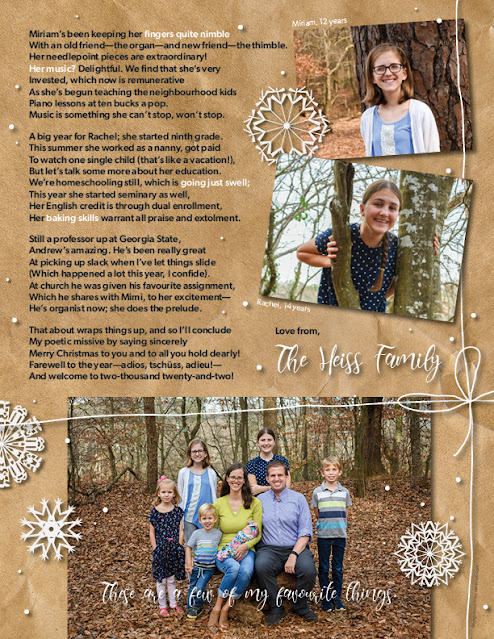 Miriam’s been keeping her fingers quite nimble

With her old friend—the organ—and new friend—the thimble.
Her needlepoint pieces are extraordinary!
Her music? Delightful. We find that she’s very
Invested, which now is remunerative
As she’s begun teaching the neighbourhood kids
Piano lessons at ten bucks a pop.

Music is something she can’t stop, won’t stop.

A big year for Rachel; she started ninth grade.

This summer she worked as a nanny, got paid
To watch one single child (that’s like a vacation!),

But let’s talk some more about her education.
We’re homeschooling still, which is going just swell;
This year she started seminary as well,
Her English credit is through dual enrollment,
Her baking skills warrant all praise and extolment.

Still a professor up at Georgia State,
Andrew’s amazing. He’s been really great
At picking up slack when I’ve let things slide

(Which happened a lot this year, I confide).
At church he was given his favourite assignment,
Which he shares with Mimi, to her excitement—

He’s organist now; she does the prelude.

That about wraps things up, and so I’ll conclude
My poetic missive by saying sincerely
Merry Christmas to you and to all you hold dearly!
Farewell to the year—adios, tschüss, adieu!—

And welcome to two-thousand twenty-and-two!