Today is Phoebe's due date—just another milestone on her journey to becoming a Real Girl. She's still very much in a newborn stupor, and I expect that will last for a few more weeks yet (she's allowed to be a few weeks "behind" her peers since she was a few weeks early). We don't mind the sleepiness, though. She's a cuddly little squish.

She actually did quite a bit of awake time yesterday morning, falling into an exhausted slumber that afternoon. She even let me place her in her bassinet and stayed sleeping soundly there until I got into bed to take a nap. It's so interesting to me that the current recommendation is to have infants sleep in their parents' room but on a separate sleeping surface when studies show that babies who can smell their "own mother odor increased mouthing" (source: Sullivan & Toubas, 2007 (this article is also interesting, though it doesn't quite support my argument)). This is something we learned when Benjamin was in the NICU—our favourite occupational therapist, Annie, told us that babies begin stirring in the bassinets the minute their mothers walk through the door. They recognize their mothers and want them almost immediately (Annie also explained that young children still have this instinctive desire to come to their lactating mothers and, indeed, whenever I've been nursing my newborns my toddlers have flocked to me).

So it seems almost like a recipe for disaster, trying to keep baby in their own sleep space but in the same room as their mother. My babies always just fuss and fuss and fuss until they're back in my arms. So...we usually end up co-sleeping (which isn't as risky as it sounds).

In fact, we've started having Phoebe "hang out" in Daddy's office while I'm trying to work because there she'll peacefully rest...until I walk into the room (and then she immediately starts acting like she needs milk now). She can't hang out in her bouncy chair in my "office" because...she just fusses.

Like, why can I smell you...but you're not here?

Anyway, Phoebe has reached her due date and is quickly coming up on being three weeks old. She's sweet and squishy and is starting to spend more time looking around at her world. But mostly she's still very sleepy.

Last night, bedtime was rather peaceful. I read to the kids while I nursed Phoebe. We're reading The Good Master right now, which I'm really enjoying (and I think the kids are, too). It's like The Little House on the Prairie but set in Hungary (and possibly less problematic). It's rather bucolic, so it makes for a cam bedtime read. Alexander fell asleep on my bed while I was reading last night. I can't lift him yet (in fact, I forgot I'm still not clear to lift things yet and when I checked on Zoë last night her head was hanging off her bed—she was nearly horizontal—so I tried to hoist her back onto her pillow and...I could not! Somehow she weighed a billion pounds; I don't know when she got so heavy)! 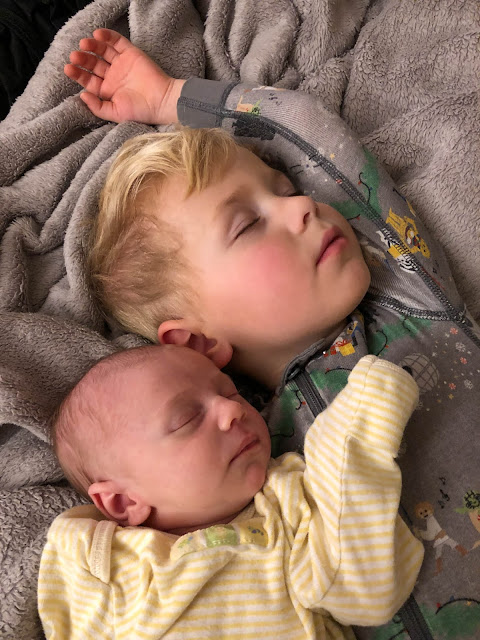 Anyway, before I had Andrew cart Alexander off to his own bed I rested sleeping Phoebe on him for a few pictures. They were adorable together and my heart melted into a pathetic little puddle of motherly love and I felt in that one small moment that everything was absolutely perfect and life could never get any better than this. They are perfection: 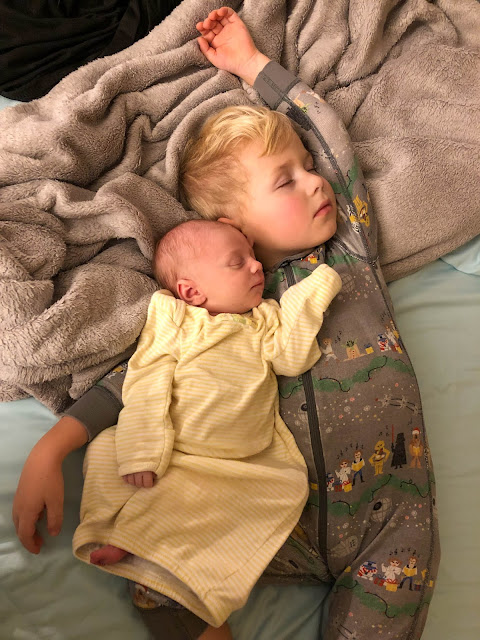 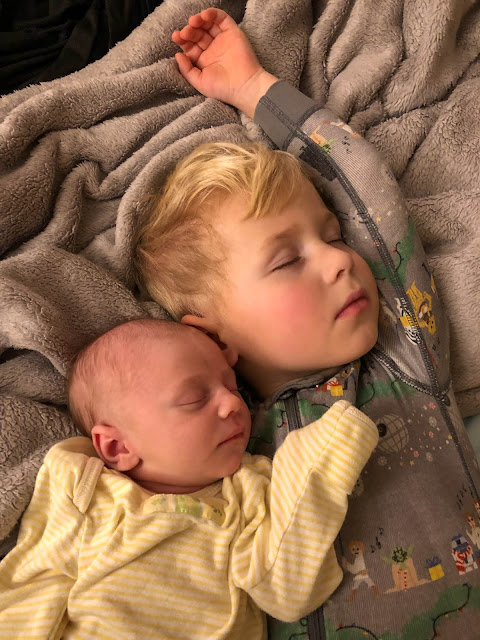 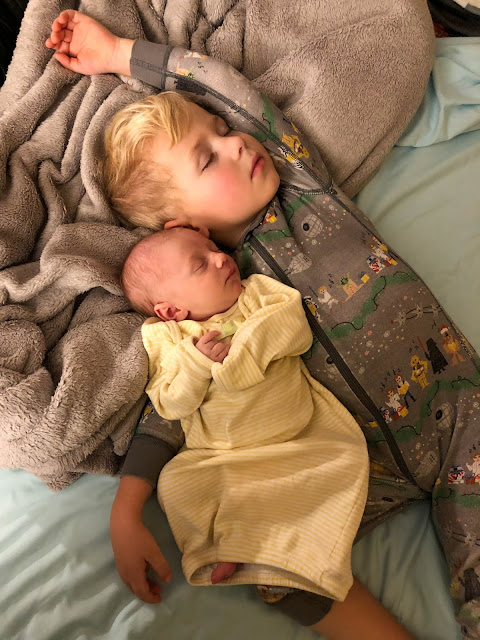 Of course, the evening rapidly spiraled into chaos from there. There was a lot of fussing and nursing and spit up and pooping. Alexander and Zoë and Phoebe were all up at one point in the wee hours of the morning. Alexander ended up sleeping on the chair in my room because he was too sad to be in his own room. They kept me up from around 3:00 to around 7:00 (which doesn't sound too bad, until I tell you I was up working on school/work projects until 1:00 in the morning) and I absolutely didn't want to get up this morning.
So Andrew (who took a few turns trying to convince Alexander to stay in his bed), got up with Phoebe around 8:00. I fully expected him to wake me up before 9:00 when his first meeting for the day was, but he didn't! He pushed his meeting (it was office hours with a student and they were willing to be flexible) so I got to sleep in. And when he brought Phoebe to me I just fed her and then we fell asleep and napped together for a while longer before finally crawling out of bed at 11:00 or so, which felt...less than perfect.
But the kids had started their schoolwork under Andrew's direction (I guess he decided he needed to take a turn being the math tutor so that he could teach our children math correctly (more on that later (I think I may have made more "more on that later" promises than I can possibly keep, but I will try to catch up on November eventually))), so the morning wasn't entirely wasted. And really that's just what life is like, isn't it?
A whole lot of chaos punctuated by precious moments.
Those precious moments make it worth it, though!
Posted by Nancy at 3:18 PM