Phoebe's been five months old for nearly two weeks now, so I guess she's more like five and a half months old (which is blowing my mind), so here's a little bit about her before she's six months old.

We'll start with her toes, which she found the other day. She thinks they're a whole lot of fun to grab, which works great when she's flat on her back and less well when she's sitting up (because then she ends up folding right in half). Here are a million pictures of her grabbing her feet: 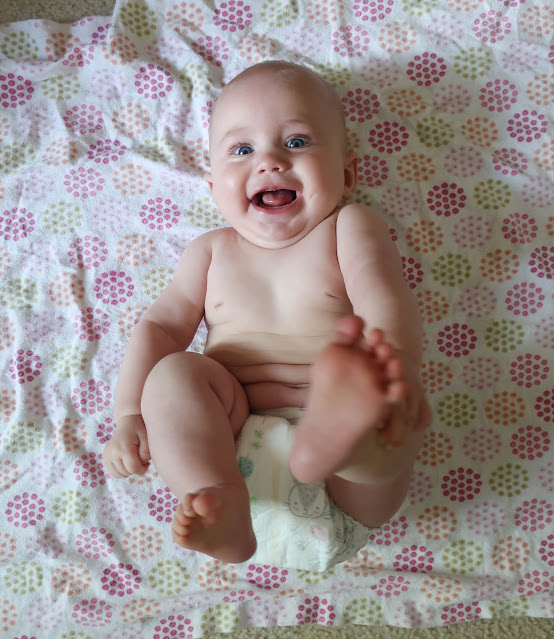 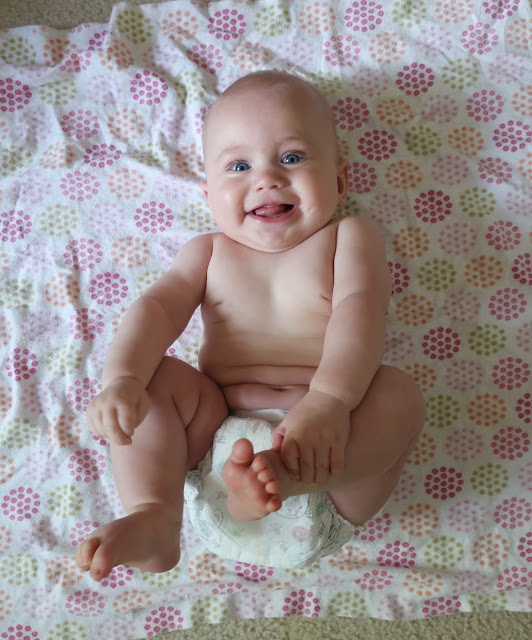 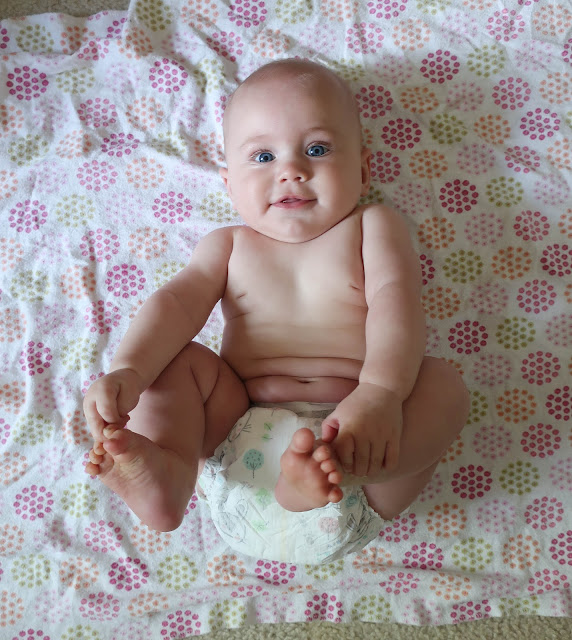 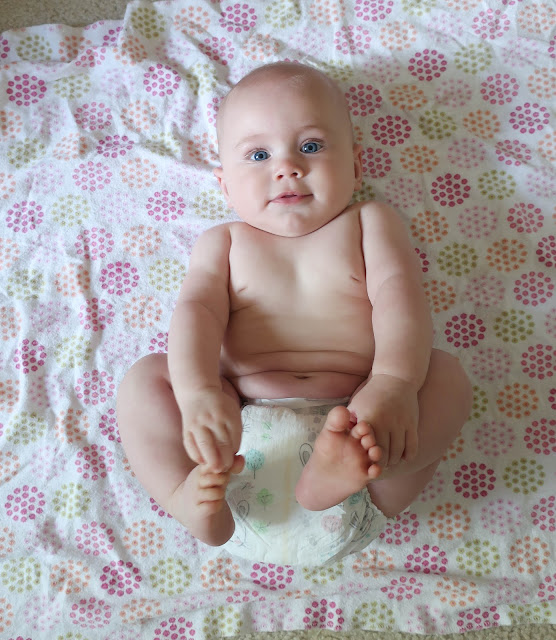 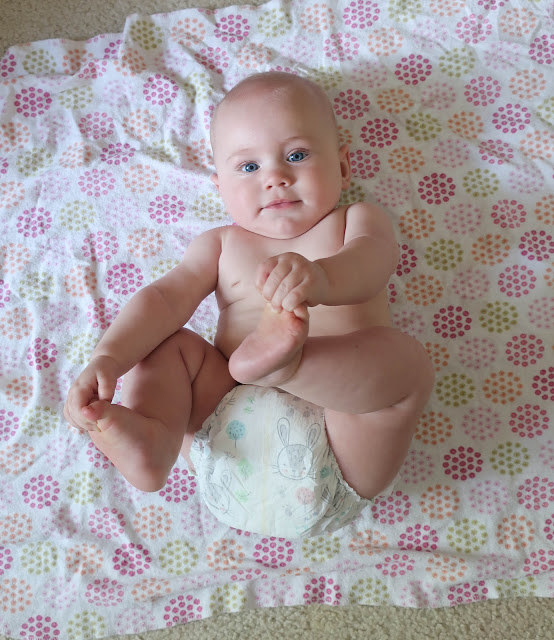 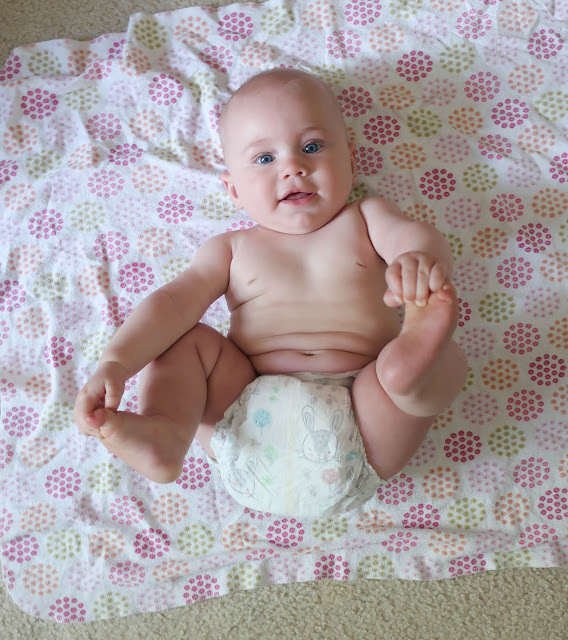 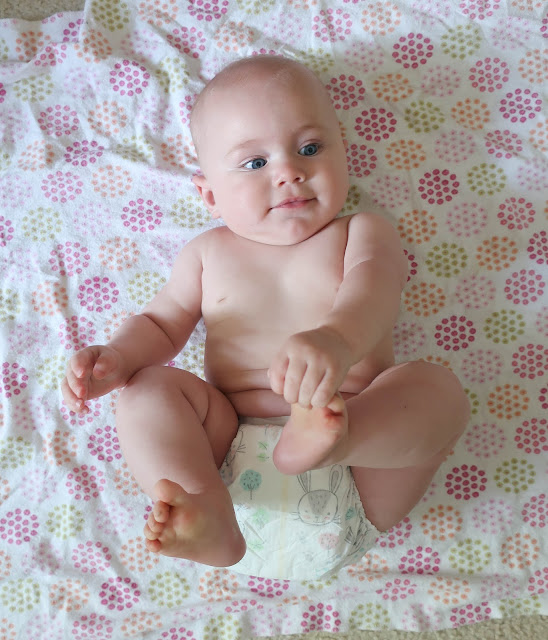 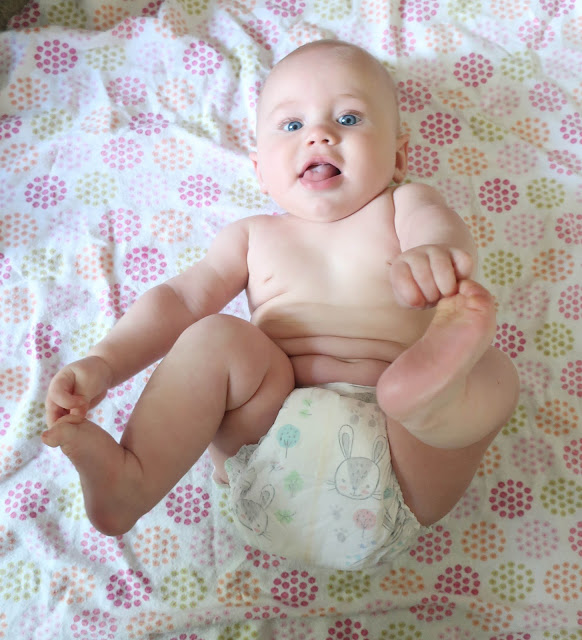 I wrote this on Facebook on her actual 5 month day:
Phoebe is five months today. She rolls all over creation and is working on her sitting-up skills (her spitting-up skills are top-notch; spit up is everywhere, always). She loves one particular book—الألعاب (The Toys)—I think because there’s just one picture on each page (???). She finds Benjamin’s fake burps hilarious. She does not like sudden changes in altitude (being carried down the stairs, being tossed in the air, going down slides). She does not like being startled (no loud noises or sudden movements). She does not like the dark. She *does* like licking things (she got to chomp on bell pepper slices last night and thought they were two-thumbs-up good). She does not appreciate being put down, ever (we think maybe she’s been playing The Floor is Lava since birth).
Here's Miriam spotting Phoebe: 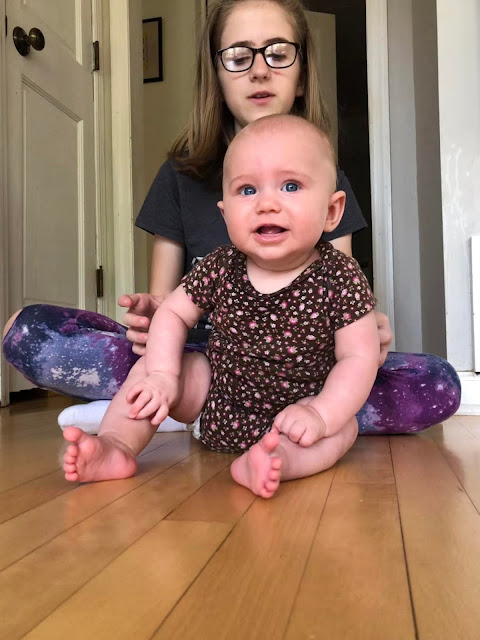 (You can see she's still pretty unsteady here; this was taken on April 13) 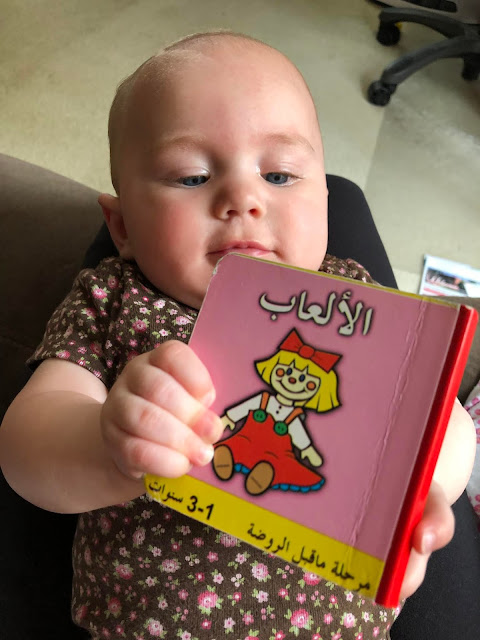 She really is so funny about being scared. She hates being carried down the stairs. She tenses up, holds her breath, her eyes get all red. It's both funny and sad.
The other day she was in her exersaucer (which she now loves) and was spinning around, assessing her toys, when Miriam walked into the room behind her. When Phoebe finished spinning around and noticed Miriam standing there, she startled, and then started crying.
Miriam didn't even do anything! She didn't say "Boo!" She didn't jump out at Phoebe. She was just...in the room when previously she had not been.
Andrew was holding Phoebe the other day while I was carrying some groceries downstairs to the storage room. When I came upstairs, he popped out from around the corner and scared me. I didn't even react terribly. I just gasped and jumped and said, "Oh, no! You got me!"
Phoebe started howling. So evidently she'd doesn't like to be party to scaring at all—she does not want to be frightened and she does not want to frighten others.
We're always accidentally scaring Phoebe. She's just so scare-able. We were doing yardwork yesterday and Rachel, who seems to have inherited Andrew's allergies (are allergies genetic?) was holding her and sneezing and I had to trade off yard work duties for baby holding duties because every time Rachel sneezed Phoebe would crank up her screaming volume. She was terrified. Of sneezing.
But here she is sitting out on the grass, squinting at how bright it was outside. 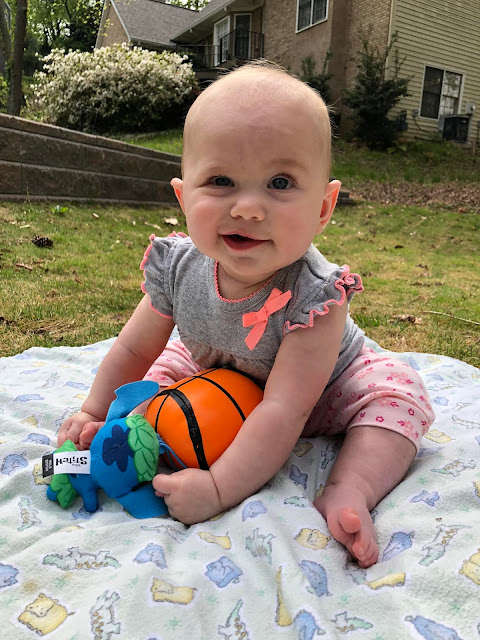 She didn't want to be on the blanket and decided to pull it aside so she could investigate the lawn: 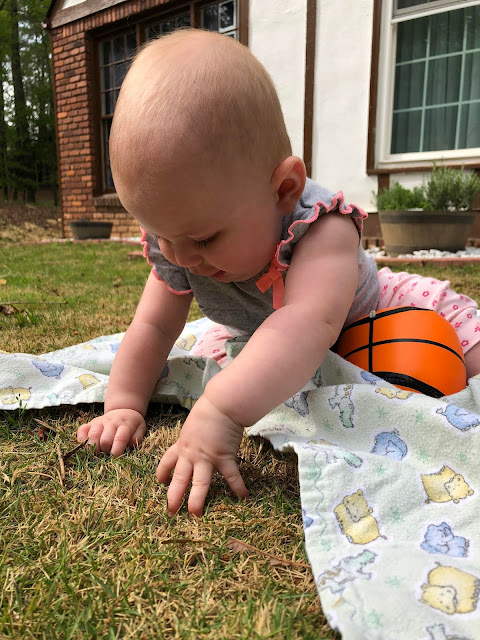 She ended up getting out of a sitting position so she could give the lawn a good, thorough looking at: 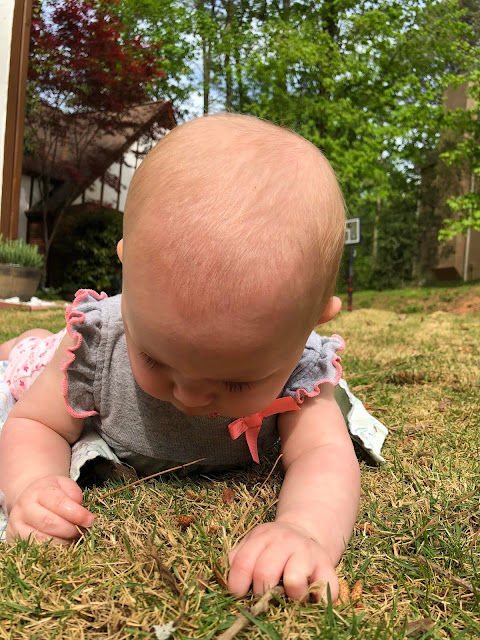 (Side note: I'm pretty sure she's turning blonde and...talk about a bait and switch; she really had me convinced her dark hair was going to stick around.)

Today when the girls came home from in-person church (we won't talk about how...angry...I am that they announced today that we'll only have a few more weeks of Zoom church until...no more) they remarked how one of their young women leaders had brought her baby (who was due before Phoebe but who arrived after Phoebe) to church all dolled up in a beautiful dress. Reportedly, this baby just sat there not spewing bodily fluids everywhere and the mom confidently sat there without a burp cloth in her hands.

So they asked me what was normal—our human volcano or this other type of baby.

With a heavy sigh I had to tell them they were both normal.

I just happen to birth babies that are a little higher maintenance than other babies. From my experience it is normal to have babies constantly spitting up and pooping everywhere. There's just...fluid...it's going to be...everywhere...always. I've come to accept this. It's my normal.

And I really think that these reflux issues my children have contributes to their inability to sleep well.

So, it's just...like...at our house sleep is never a given but spit up always is. As a mother-to-an-infant, I'm an exhausted mess of a thing. And that's just how it is.

Other moms have it differently—some ways better, some ways worse. And they're all...normal.

I will never forget being in the mother's lounge with my friend Tiani (though at the time we didn't know each other very well). We'd just moved to Durham with teensy-weeny Benjamin and she'd just started coming to church with her wee one (who was much bigger than Benjamin on account of being born on time). We'd finished feeding our babies at around the same time and were preparing to help them burp when I noticed that Tianai didn't have a burp cloth with her.

And when I'm talking "burp cloth," I don't mean those delicate scraps of fabric some moms throw over their shoulders to catch a little bubble of spit up. I'm talking, like, a full-on receiving blanket to catch the inevitable waterfall that's about to gush forth.

So I said, "Oh, you've forgotten your burp cloth. Would you like to borrow one?"

Because I never have just one receiving blanket in my diaper bag. That will be soaked within minutes, so I always carry five or six or something.

"Yes, like, when you're burping your baby and they spit up everything they just ate..."

So we burped our babies and her baby (who, for the record—and I know I've told this story before, but bear with me—pooped once a week on average) gave a delicate little "urp" while Benjamin had milk blowing out his nose and mouth, was writhing in agony, screaming and crying.

"Yeah, my baby does not do that!" she said in wonder.

Some babies don't spit up. Who even knew?! Tiani and I stared at each other like we were from different planets (we were! she didn't even know what spit up was!). But we became good friends so it all worked out.

Anyway, Phoebe spits up a lot. Not as much as some of my babies, but more than others of my babies. And now she rolls around and spits up and soon she'll be crawling and—yes—more than likely still spitting up all over creation. It'll be fun.

She also likes grabbing things. Today Andrew was holding Phoebe in the kitchen and Zoë came up and stuck her face in Phoebe's face, so Phoebe reached down and grabbed a big fistful of Zoë's hair, pulled her face close to hers, burped, and then spat up. It was in Zoë's hair, and got all over her from her shoulder down to her toes. Zoë was devastated because she was wearing the pretty red dress Auntie K had given her and now it was covered in Phoebe cheese!

"It's this dry clean only?" she wailed.

It's not. It's just regular wash. Thank goodness.

This evening we gave Phoebe strawberries at dinner, a food Phoebe thought was, perhaps, straight from heaven. She was slurping and snorting and inhaling those strawberries. 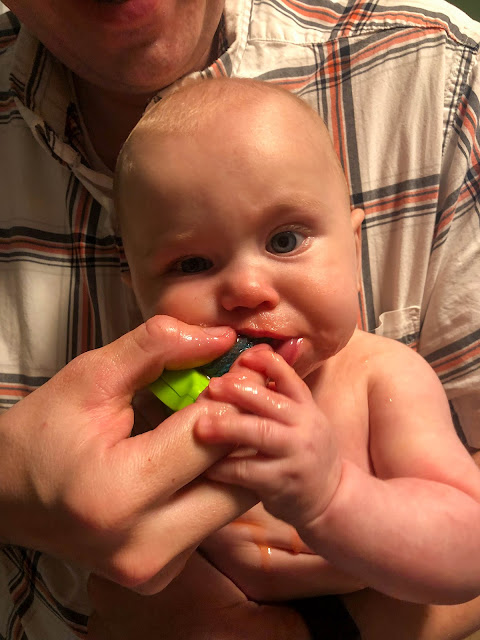 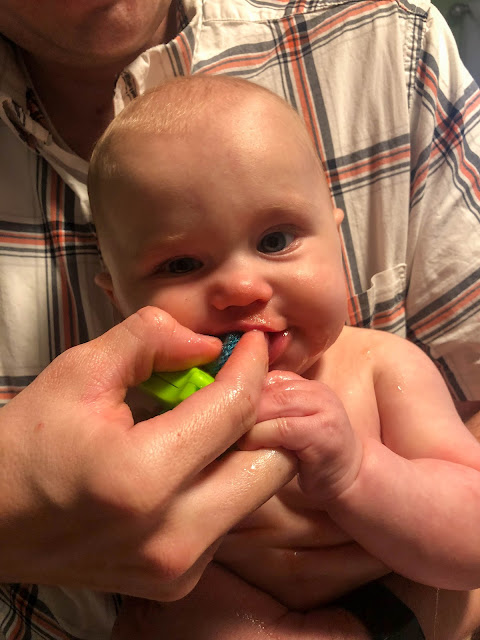 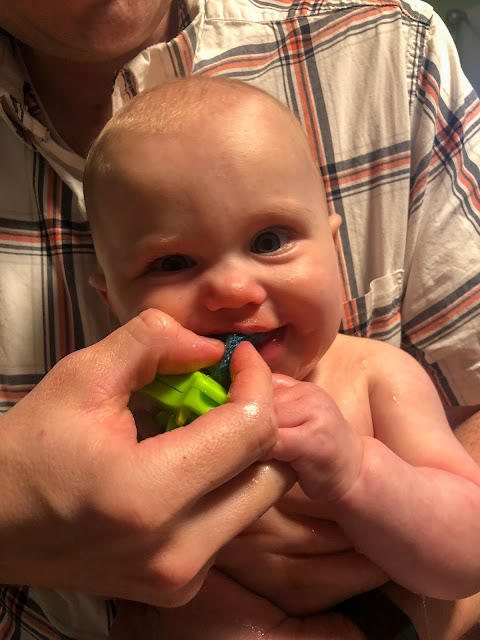 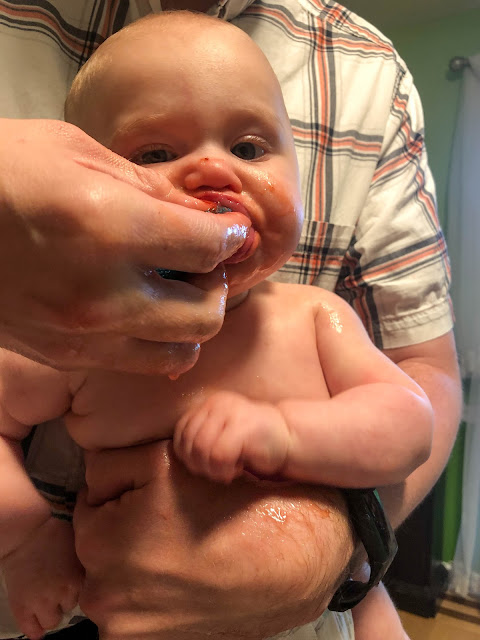 So then later her spit up had a lovely strawberry milkshake vibe. She was spitting out pink spit up all over the place, which is somehow worse than regular spit up...like I had forgotten that when she starts eating she'll keep on spitting up so then her spit up will have food chunks in it, which is just...worse than plain milk. But, oh, well.

Alexander helped me give her a bath after dinner (he hopped right in the tub to be her "chair").

Here they are a few nights ago reading a story before bed. Alexander chose her pyjamas, which say HUGS across the front and then said, "We have a book called that! Let me go find it and read it to her!" So he went and got the book HUG (by Jez Alborough) and read it to her. It was very sweet. 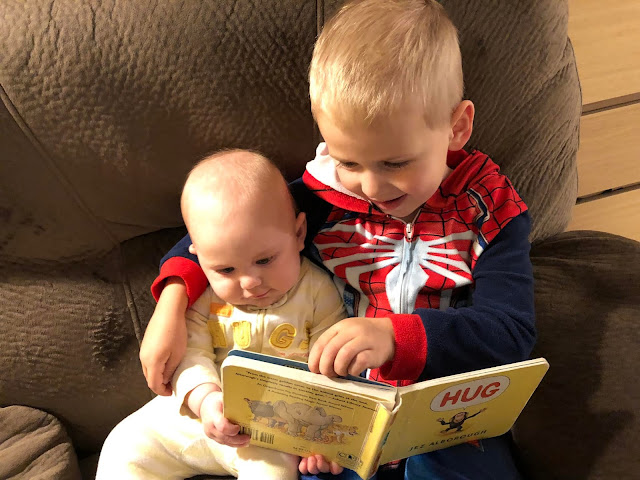 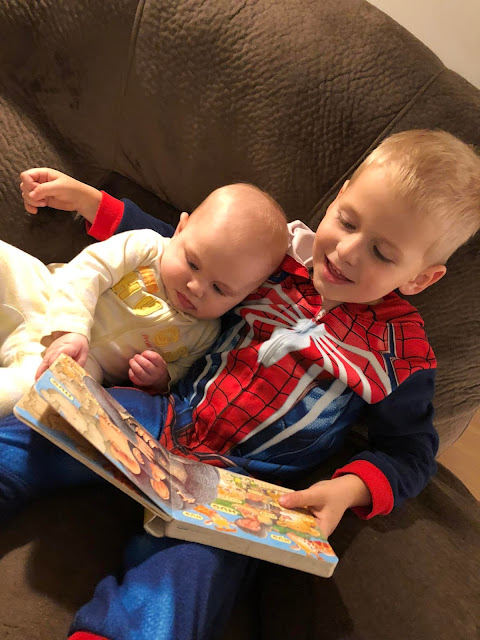 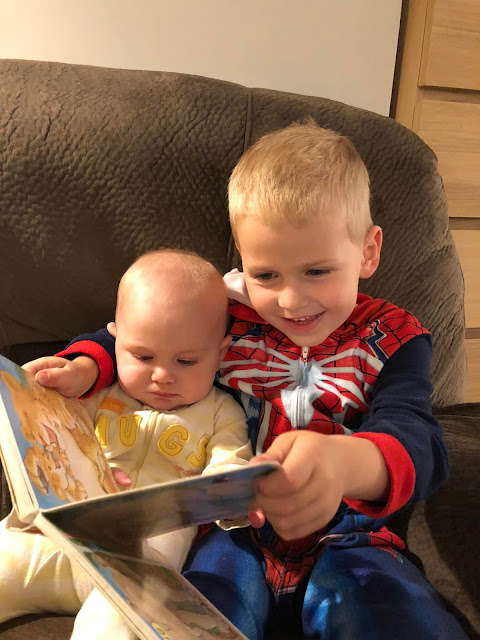 We're happy to be getting to know Phoebe and it's such a thrill to watch how sweet her siblings are with her.
Posted by Nancy at 12:54 AM