My husband is bald again. I cut his hair on Wednesday. Although I think that he looks much better when his hair is long enough that he actually has to comb it (I think the rest of the world agrees with me, too!), he is a lot happier when it is short. I mean, short! I cut it pretty short but then he said, batting his puppy-dog eyes, "It would be nice if you could do it a little bit shorter..." So, now he's pretty much bald.

That much hair off of a boy's head! 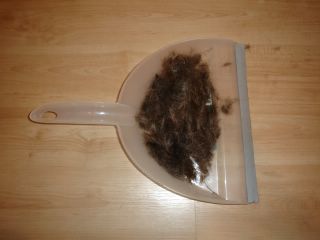 While I was cutting his hair, he reminded me of an experience we had while in Jordan. His hair was getting beyond a joke. It was to the point that he should not have been going to school without doing his hair, but still was. He had massive bed head and would not fix his hair! So, I borrowed Ashley's clippers in order to remedy the hair problem. Believe me, he's better off bald than refusing to do his hair.

We picked up the clippers on the way home from church one day. She warned me that they weren't very good clippers but that they still work just fine. We were like, "Yeah, sure...thanks." and were on our way.

I don't remember exactly when I cut Andrew's hair but we had the clippers for a quite a few days, so it must have been sometime later that week. Anyway, we went into the kitchen and I commenced cutting Andrew's hair. He was being such a baby..."Ouch! Ouch! You're pulling it! Stop! That hurts! Ouch!"

Ten minutes later I had cut like 3 square inches of hair off. Andrew was crying.

We decided that the clippers really weren't very good clippers, and contrary to what we were told, they didn't work just fine anymore. But, he already had a nice chunk of hair missing, so I had to finish, right?

So we started cutting again. Poor Andrew was getting burned and nicked. It was horrible. And it was taking forever. About an hour later we heard a *pop* and the clippers stopped working.

Now I was really worried. Had we just broken Ashley's clippers? Had we fried the converter we were borrowing from the Slades? Or did the clippers just over-heat and automatically turn off?

We stewed about this for a while...crossing our fingers and hoping and praying that it was the latter. I mean, breaking Ashley's clippers wouldn't have been too bad. We would have had to have replaced the clippers, but it's not the end of the world. Had the converter broken though, that would have been pretty bad. Half of our appliances would be rendered useless!

The haircut took a total of about 3 hours to finish. Poor Andrew had a sore head for a few days after we were done the haircut and I swore I would never cut his hair ever again (using Ashley's clippers). Quite frankly, I don't know how Ashley or Ben can stand using those clippers. Ben must have a pretty tough head and Ashley must have a lot of patience. I certainly hope that Ashley gets a new set of clippers for Christmas!
Posted by Nancy at 12:51 PM