Who's got YOUR vote?

With elections drawing near (Tuesday, isn't it?), we have been bombarded with campaigning junk mail. Every day we come home from school and there is some flyer on our door or ad in our mail box telling us about some person's campaign. More often than not, they are republican ads--everyone knows is redder than red and righter-winged than right-winged when it comes to political issues. A few days ago we got some flyer from the "Constitution Party." They are probably as republican as you can get. They quoted Isaiah 29:13..."Forasmuch as this [government] draws near [to the constitution] with their mouth, and with their lips do honour [it], but have removed their heart far from [it], and their [following it] is taught by the precept of men: 14 Therefore, behold, I will proceed to do a marvelous work among this people..."

Granted, I do think that the constitution is pretty close to hanging on a thread, but seriously, no one is going to get my vote by taking God out of a scripture and replacing it with the word constitution. People do some pretty wacky things when they are campaigning.

Today I went to get the mail and was quite pleased when it was addressed to me instead of to Andrew. Everything seems to be addressed to him these days. Alas, it was another flyer. This time it was for Brad Daw (another republican. Go figure). Other than being grotesquely patriotic/republican, the ad wasn’t too bad. And I was happy that people were finally starting to try and win my vote over, as well as my husband’s.

Upon further analysis, however, I realized that I wasn’t actually the recipient of this flyer. Nancy Pear Heiss was. 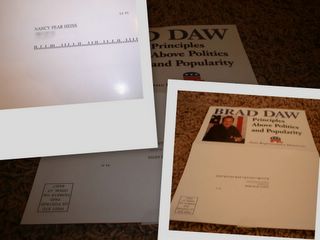