How Bizarre, How Bazaar...

Andrew has also been acting a little sick lately. For lunch I made him tomato-chicken-noodle- pumpkin-curry soup. It was actually pretty good. I loaded it with garlic and other spices to hopefully clean out his sinuses. (Oh, and the chicken noodle part was actually a Turkish brand of instant soup that we bought in Jordan. It's called Bizim and is a lot cheaper than Maggi, although Maggi probably tastes a little better.) So, my second reason for making some currified meal was to help Andrew get better.

I decided that for dinner I would make curry chicken. The only problem was that I had never made curry anything, let alone curry chicken. I turned to the good ol' World Wide Web to find a recipe. This was a far more difficult task than it originally seemed. After looking at 3 or 4 recipes, I turned to Andrew and exasperatedly said, "None of these so-called 'Curry Chicken' recipes call for curry. How can you make curry chicken without curry?"

I decided though, that I would try to follow one, so I looked at a few more to find one that I thought sounded good. Most of the recipes called for the following spices:


I didn't know what I was going to do since I didn't have the foggiest idea what coriander or tumeric were. I searched through the spice rack that we got as a wedding gift because it has a whole bunch of spices on it that I don't know what to do with. I found the coriander, but we didn't have any tumeric. I was stumped. I had no clue that curry chicken was made without curry and now I didn't even know what half the spices the curry chicken recipe called for were!

That got me thinking though. When Andrew and I were in Turkey, we went to the spice bazaar and got a number of different spices that are either hard to find, or extremely expensive in the State. One such spice was saffron--we got a whole lot of it for very little money because Turkey is one of the biggest producers of saffron, which they then sell to America at exorbitant prices. Like 5 grams for 18.21 USD! We got 100 grams for such a trivial amount of money that I didn't even bat my eyes. I think it was around 2 or 3 dollars. Yeah, that's a whole lot cheaper. 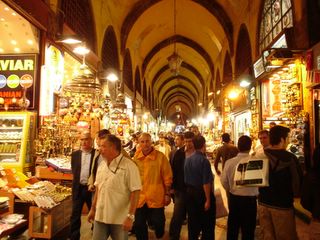 Check out Bridget's Syria blog for some great spice pictures!
We also got some curry. Quite a bit of it, simply because curry is just so good. Curry was right in there with the other spices. Just sitting out in a container by the cinnamon and allspice and the other ground up spices.

I sat there trying to figure out why in the world we were able to purchase curry yet people don't actually cook with curry. I turned to Wikipedia for my answer. As it turns out, curry is a mixture of spices that the British concocted to keep the savor of Indian food while in Britain, without having to mix all the spices while cooking. So, "curry" as we know it contains cinnamon, garlic, tumeric, coriander, nutmeg, fennel, and a bunch of other spices, proportioned very nicely to give food that "Indian" taste. Curry isn't a real spice! But it sure is a great mixture of spices. I'm glad that someone else goes through all the trouble to measure out all the spices and mix them up for me. It makes it so easy to make an authentic-tasting Indian dish.
Posted by Nancy at 12:06 PM