Let's face it. Our couch is a Venus fly trap. It's a little blue love seat--very comfortable, but it's called a love seat, er, trap, for a very good reason. Any two (or more, as the case may be) people who sit on it have to be very comfortable getting cozy with each other. It just kind of sucks you in and never wants to let you go.

We had the Bishopric over once. Brother Astorga sat down next to Andrew on the couch and...well, it was rather embarrassing for both of them, involving some leg touching and full body contact before they could get all upright again.

Our poor home teacher's wife is 7 months pregnant. Once she sits down in that thing there is no hope for her to ever get back up unassisted.

Let's just say that our couch has caused us some embarrassment in the past. Not that we don't appreciate the folks who gave it to us. We do! We just now understand why they got rid of it.

So, our living room is beautiful now and provides ample seating for our booming social life. (And, yes, that is a Christmas tree. So sue me!) 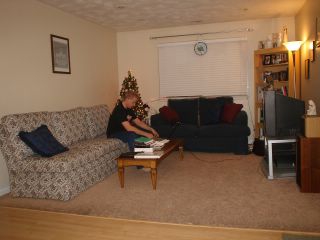 We went to Aunt Nicki's place and picked up the couch, a bed (for Richard and Diana), a dresser and a dish washer (technically that was from Grandma Pat, who just remodeled her kitchen). The couch happens to match our venus fly seat/trap rather nicely and she gave us some throw pillows to tie them all together. It's odd how big our living room looks now that we have two couches in there instead of a love trap and a chair.

I arranged all the furniture by myself. Well, almost all by myself. I had a little help from Andrew but he had to work this afternoon, so it was up to me to put our house together before David, Brandon and Josie came over to watch Hoodwinked, a rather interesting little movie.

I decided to move the chair into our spare room since African animals are no longer our theme...it's now a flowery pattern themed room. The chair just doesn't go. So, I first got it this far: 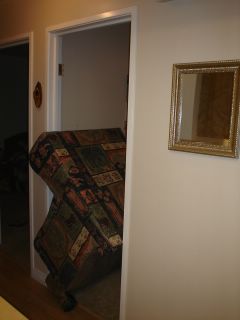 But then I got stuck inside the room and had to slither under the chair to get into the hallway so that I could look at things from this end. Things weren't going well, so I took the chair out of the door way, tried another angle and got this far: 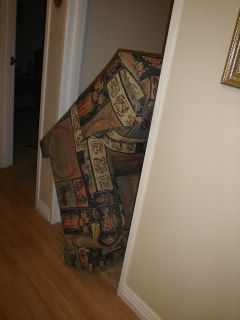 I gave up on my third attempt and decided to wait until Andrew got home. Somehow he got that chair through the doorway. I don't know how. He must be amazing because by all accounts it doesn't add up. 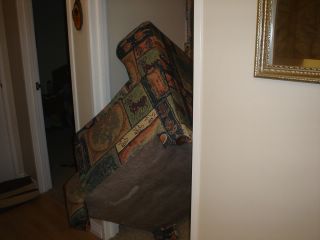 Speaking of accounts adding up, Andrew and I tried to give Josie a lesson in applied mathematics today. She wasn't really interested, but we thought it would be good to prove to her that math is useful.

Yesterday we decorated our house for Christmas. We were putting lights up in our window and playing with the flashers to make them blink and do all sorts of things. Okay, they don't do all sorts of things. They just blink or don't blink. Well, we had put lights up as a border to our window but had about half the string left. I thought it would be kind of cool if we made a star in the middle of our window with the border blinking. So, we set about to make a star. When we were finished, we went outside to admire our work.

It was awful. Lop-sided, uneven, and let's just be honest here: it didn't look like a star. Being the nerds that we are, we went inside, pulled out our tape measure and measured the length of remaining lights. We then divided that by five, marked off on our string of lights (5 times) and made a perfect star in our window.

So, you see, Josie, math is helpful whether you like it or not! Oh, and we have the most symmetrical star in the neighborhood.
Posted by Nancy at 11:38 PM