As I mentioned, we’ve been sick. We’re all doing much better now, thank you. Rachel is completely over her cough, Miriam is sleeping for much longer than forty minutes at a time, and my sinuses are almost cleared up. And it’s awesome.

Miriam was probably the sickest of us all. She ran a fever for a couple of days and then was stuck with this horrible, hacking cough that would shake her body from head to toes. After she finished coughing she’d whimper.

She was, in a word, pathetic. And things only got worse at night.

She was so congested that she could hardly breathe when I would lay her down and when she would cough she couldn’t seem to stop and instead of ending with a whimper she’d end with a crying fit. Add to that the nursing strike…and diarrhea…and, yeah. We were pretty miserable. She was up all night long several nights in a row.

So Karen convinced us to go to the doctor. Our family doctor gives a 20% discount to uninsured patients and since any other sliding scale/reduced fee clinic I found couldn’t see us any sooner than a week away, I went ahead and made an appointment.

He was really nice, which we already knew, and decided, in the end, that Miriam is just her father’s daughter.

When Andrew was little he would get acute bronchial asthma when he got sick. Meme seems to get it, too. This is the first time she’s had a cough, really, and apparently other people can get over it but for some reason she just can’t. Neither could her daddy.

So $140 later ($116 with the discount) we were on our way with three prescriptions in hand—a steroid, an antibiotic, and albuterol nebules. Wal-Mart fills prescriptions for $4 so we went there. That was another $12. We should have gone to the doctor a lot sooner, probably, since it wasn’t quite as expensive as I thought it would be.

Is it just me or does at $25 copay seem like a lot when a doctor’s appointment is only $100 (the $40 was a “new patient” fee)? Most insurance policies that we’ve looked at are at least $200 per month, so for us, this month, it was cheaper to go uninsured and pay for the doctor out of pocket. That’s risky, I know, and we are shopping around for a policy still, but it makes me wonder if we should just go with catastrophic insurance or an HSA. I hate feeling like I’m paying so much for so little in return. And then having to pay on top of it…

Anyway, Miriam hates taking most of her medicines. She only had to take two steroid pills, which we crushed up and mixed in with solid foods, as per our doctor’s order.

“Just mix it up with a little applesauce or cereal. I’ve never had anyone complain about it,” he told us.

That’s because he hadn’t met our baby, who is morally opposed to solid food. She likes solids, just not solids that are foods. We tried it with applesauce on day one and yogurt on day two and I basically had to hog tie her and dribble it down her throat.

I should have just mixed it up with some sand because I know she would have eaten that.

She is still taking her antibiotic, though only does so willingly if Andrew gives it to her. If I try to give it to her she purses her lips together and shakes her head back and forth while waving her arms in front of her face so that I don’t stand half a chance of getting the syringe in her mouth. The one time I got her to take it without a fuss she didn’t swallow and instead spat it out at me after I had removed the syringe.

The albuterol, though. That’s a different story. Miriam loves the nebulizer. Thankfully Andrew’s mom had a few tucked under the bathroom counter—one from when Andrew was little and one from when Jacob was little—so we didn’t have to buy one. We decided to use Jacob’s one because it was about a decade newer and had an unused tube and mouthpiece with it.

We hooked it all up, squeezed a nebule into the chamber, flipped the switch on the air compressor, and stuck the mouthpiece in Miriam’s mouth. She started sucking on it like it was the best thing, ever. 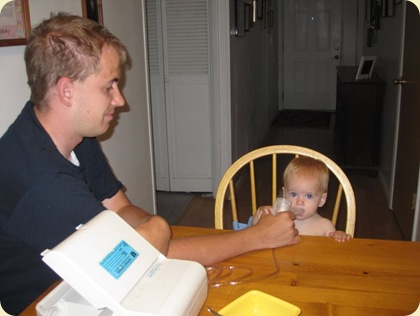 Karen joked that it was a good thing we moved away from the Middle East or, before we knew it, Miriam would be out on the street smoking shisha with the locals. 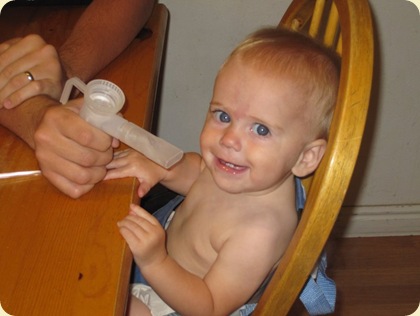 Sometimes she would happily hum while inhaling (isn’t that poetic?) but more recently she’s started to reject her breathing treatments so we’ve stopped offering. Her cough is gone and she is sleeping so much better and I can’t recall when it was the last time I wiped her nose (I didn’t do it once today), so we think she’s mostly better.

We just have to finish up the bottle of antibiotics, but I’m thinking of casting that burden on Andrew since he’s so much more successful at administering it than I am. Unfortunately, I’m the stay-at-home mom so I’ll have to at least give her the middle-of-the-day dose. He should be able to get the morning and evening doses, though. After all, it’s his faulty genetics at work here.