Today Rachel had school, and then Sunbeam Swap so she went over to Asher's house for the afternoon, making Miriam my only child all day long. It's nice to get a little one-on-one time with her because when Rachel's around she always has to share me, naturally. Neither of the girls like sharing me, though, so it's nice to get them on their own.
Miriam kept dragging me off to her bedroom.
"Come on, Mommy! Play me!" she'd say.
We played with blocks and trains and Mr. Potato Head and Pop-Ons and read stories and pushed decaying pumpkins around in the doll stroller before Miriam set off to play with Grandma. After a few minutes she wandered back to me saying, "Where's a cutters, Mommy? Where's a cutters?"
"Do you want to colour?" I asked. "They crayons are on your desk."
"No! Not crayons! Cutters! Up dere!" she pointed to the scissors on my desk.
I let her practice cutting for a while. Oddly enough, while she cut she sang, "Rock. Paper. Scissors! Scissors cut paper! Rock! Paper! Scissors!" so I'm not quite sure why she was calling them cutters. 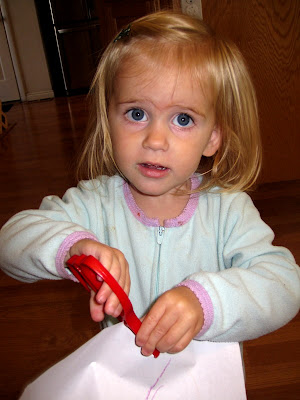 Miriam opted to stay in her pyjamas all day until we went to pick Rachel up from Asher's house. Miriam and I hadn't been outside since dropping Rachel off at school this morning when it was cold and frosty so we were quite surprised by how warm it was and decided we should go to the park. Besides, that was the only way I could convince her to put some clothes on.
At the park, Miriam conquered the yellow tube she has struggled with for the past year and can now, with much difficulty, make it to the top of the play structure and slide down the slide by herself. She was pretty proud of herself. 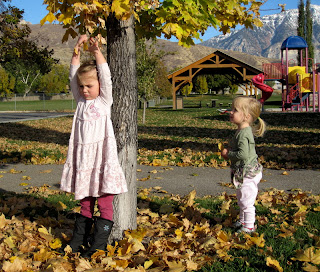 The girls had fun playing in the fallen leaves. 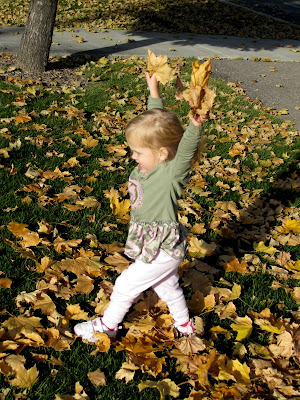 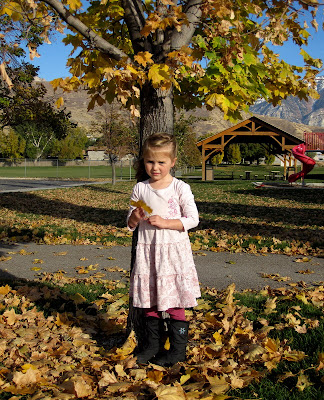 Rachel was a little grumpy but I just assumed it was because she had had a long day of school and playing. She didn't tell me until we were on the way home that she had a headache. Shortly after we got home she disappeared and I found her in her bed, resting. She refused dinner and went to sleep early, running a slight fever. 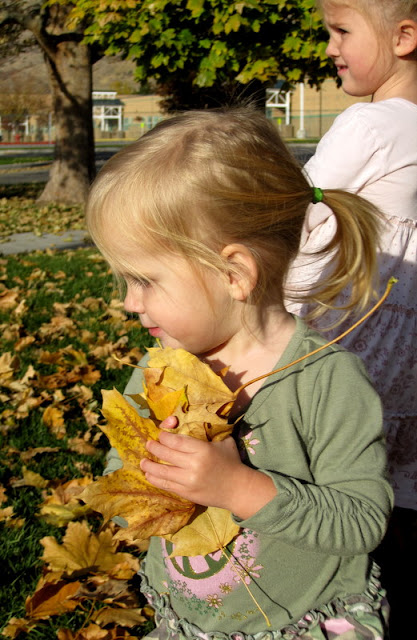 I wish she would have said something about not feeling well earlier but at least she seemed to enjoy some of her time at the park. 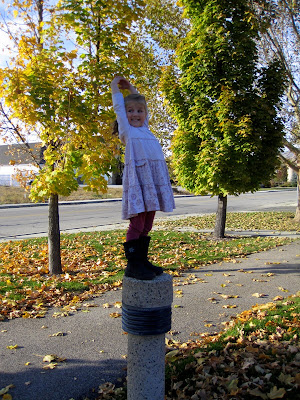 Because Rachel went to bed so early, Miriam got to stay up and play quietly so that she wouldn't bother Rachel. Her toy of choice was the Pop-Ons set. 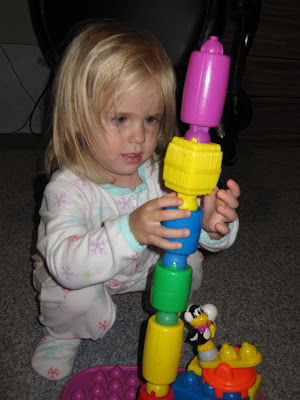 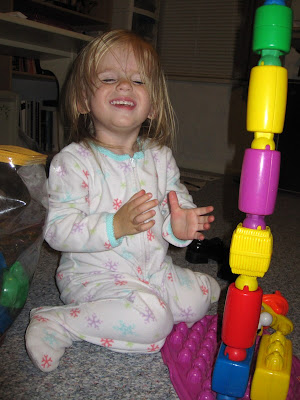 Between school, and play dates, and an early bedtime I hardly saw Rachel at all today! Hopefully she's feeling better tomorrow.