A nice, but chilly, fall day

Before it got cold I had decided that, this year, winter would be different. I was going to take my girls sledding! I was going to have snowball fights! I was going to make snow angels and snowmen and do all that "fun" winter stuff before winter disappeared because last year I fully intended on introducing Rachel to the joys of sledding but kept waiting for it to get "just a little warmer." And all of a sudden, before I knew it, I had waited all the way until it was spring and the snow had melted away.
That's my idea of "just a little warmer."
But Rachel likes winter. She enjoys playing in the snow. And some small (very small) part of me feels that she deserves to go sledding at least once this winer.
Unfortunately my resolve is already faltering.
It is so cold outside that I don't even want to venture outdoors at all. Miriam feels the same way, it seems, and has been requesting to "stay home a-Grandma" when I start bundling up to fetch Rachel from school. There isn't even snow on the ground—it's still crisp fall weather—but it's getting to be a little too crispy for my liking and I usually put on a coat over a sweater just to keep warm.
Today we had playgroup at the park once again. We're still trying to give our kids time run-around-in-the-sun time. I'm glad about that because I think sunning and running are very important things to do. The sun just isn't cutting it in the warmth department, though. We were freezing at the park.
Then we stopped by my parents' house and had lunch with my dad and Auntie Josie (who was home sick from school) and stayed to visit for a while and by the time we went back outside (at nearly 2:00) it was finally warm enough to shed our coats. I insisted the girls stay in their sweaters, though. 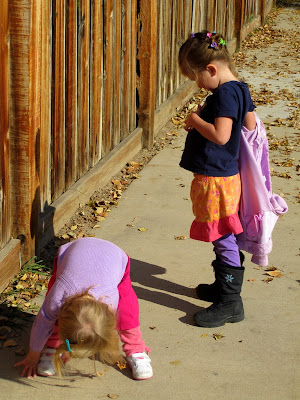 Even though they really didn't want to. The high today was in the 40s (that's the single digits in Celsius) so it was definitely sweater weather. 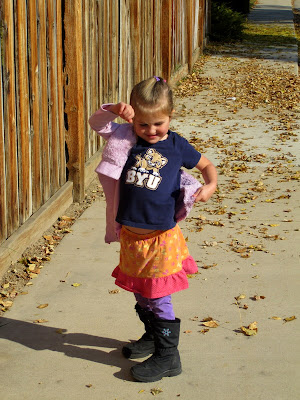 The walk home took a long time because there were so many leaves to crunch. We were stopped on one particular stretch for who knows how long—long enough for Rachel to get so bored that she stood by the stroller asking if we could go yet instead of playing with Miriam. 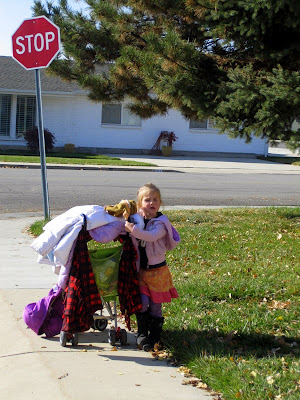 Miriam, on the other hand, was having a blast! She walked up and down the sidewalk for easily ten minutes straight. 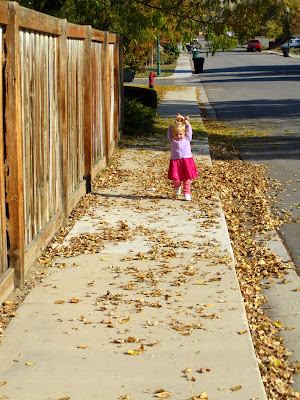 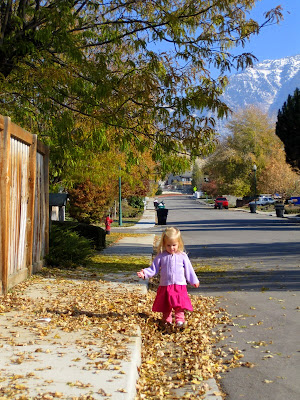 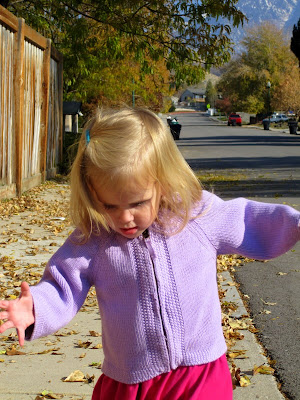 I think Rachel would have had more fun had she joined in a little more but she's been so grumpy lately—probably because she keeps waking up a full hour earlier than I intend her to, thanks to Mr. Daylight Savings. I put her to bed early today since she won't ever nap. Miss Miriam still naps, though, and that helps keep her (and me) happy! 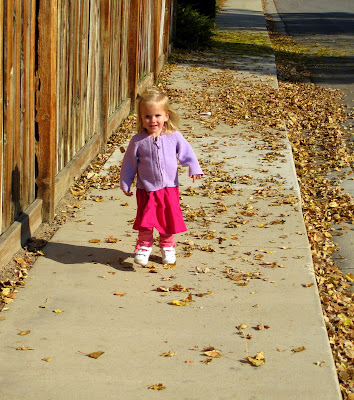 A little closer to home, we found a stretch of sidewalk covered with Ginko leaves. We found them particularly interesting because they're shaped like little fans—to think we hadn't noticed them all summer long! Rachel found that if she gathered a bunch by the stems that they made a pretty yellow blossom. She wanted to take them home and tape them together (as a craft) but then got carried away with leaf collecting and ended up tossing them into the air and letting them rain down on her. She was pretty upset when we got home and she realized she'd lost her leaves.
We made more leaves for our Thankful Tree before bed and many of them were shaped like Ginko leaves. Rachel even had me write on a leaf that she was thankful for leaves. Perhaps tomorrow we'll go collect a few more—we'll be over in that direction, anyway—so that she can make her little craft. Also, I just learned that Ginko trees are considered a living fossil. She'll think that is interesting.
Posted by Nancy at 11:27 PM