We had Thanksgiving dinner with Andrew's parents, some kids from their BYU ward, my parents, and Uncle Patrick. Rachel got shipped off to my parents house, where she spent the late morning and early afternoon waiting for dinner while the rest of us worked on the meal. Miriam and I took naps, though mine was much shorter than Miriam's. Grandpa and Grandma set the table (with Oma's "everyday" china) while we were sleeping and Miriam was very excited to see it when she woke up—her spot was set with a glass plate and a glass cup! 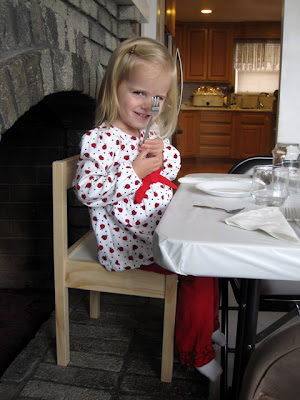 She was a little nervous about falling into the fireplace but managed to get through dinner just fine.
Dinner was great—we had all the usuals: mashed potatoes, turkey, stuffing, gravy, and sweet potatoes. My parents brought cornbread stuffing and a savory sweet potato/parsnip/carrot/potato dish. We had a vegetable platter, a couple of salads, and cranberry sauce. 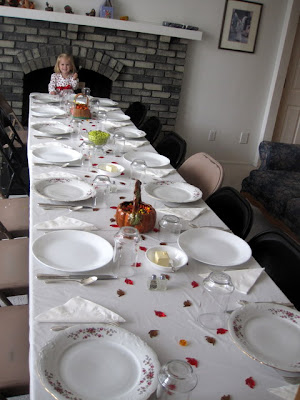 It was certainly a feast!
After playing games (to let our tummies settle) we had pie: pumpkin pie, yucky pumpkin pie, and pecan pie. Yucky Pumpkin Pie is something like a pumpkin pudding pie—the long story short is that Reid's family didn't like traditional pumpkin pie so his mom would make pumpkin pudding pie. Karen didn't used to liked it but one year Reid asked her to make it for Thanksgiving dinner so she had call her mother-in-law to get the recipe from her. She wrote "Yucky P. P." at the top of the paper. It's been known as yucky pumpkin pie ever since, even though Karen now likes it.
Two of Andrew's sisters called home this year asking for the recipe for yucky pumpkin pie. 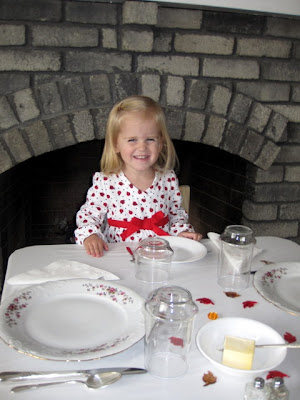 We had lots of fun visiting and eating and playing together. And when we were through eating we turned on the Christmas lights...because now we can.
Posted by Nancy at 9:23 PM