Rachel is feeling much better today—she was up a couple of times in the night but not to throw up. Her explosive bodily fluids have moved south, so to speak. But she's much more cheerful and spunky than she was yesterday.
I braided her hair on Wednesday but we just left them in all day Thursday because she was sick. We took them out this morning and she was thrilled with the results. It helped that Miriam said, "You look like 'Mione!"
"I do! I do look like Hermione!" Rachel beamed. "When it's Halloween will you braid my hair and take it out so I can be Hermione? I look just like her! I don't even look like I'm in our family anymore because I just look so much like Hermione?"
I told her I would braid her hair next year. If she remembers she wanted to be Hermione by then I'll be really surprised because she already decided upon being Little Red Riding Hood and then quickly abandoned that idea in favour of Hermione. The chances of yet another charming character coming along and stealing Rachel's heart in the next eleven months are high. 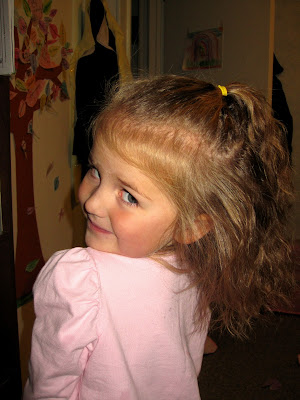 Andrew watched Harry Potter and the Philosopher's/Sorcerer's Stone with the girls last weekend when Rachel was on a movie-watching marathon because she was sick and throwing up. That's why they know about Hermione. Rachel spent all day watching movies yesterday and begged to be allowed to watch the Harry Potter movie with the snake (Chamber of Secrets) but I told her no. Later, at bedtime, she asked, "Did I ever tell you you're the best mom ever?"
"Oh am I?" I asked. "Why?"
"Well, remember that one time I was sick and you let me watch movies all day?"
"You mean like the day we just had?"
"Yeah. That makes you the best mom!"
Unfortunately that's an expectation that I won't often be able to live up to. I enforce funny ideas about life that make it simply unbearable for children—chores, meals before treats, bedtime, and the like.
I can also braid hair, which definitely scores me bonus points. Rachel was obviously pleased with the results—if there's one thing Rachel was born with, it's confidence. And while that confidence at times makes my life so, so difficult, I really hope she never loses her ability to stand up to a bully, to speak loud and clear to a room full of adults, to enforce rules and voice her opinion. She actually makes a pretty good Hermione Granger in personality. 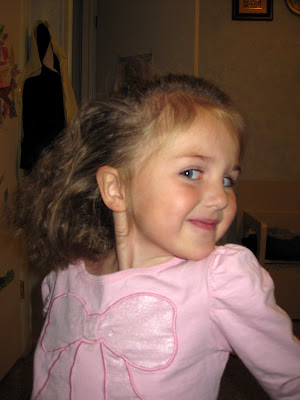 Miriam was instantly jealous of Rachels frizzy curly hair and asked that I braid her hair so that it could be curly, too. She must have really wanted those curls because she sat as still as a statue the entire time I was braiding her hair. This is the first time I've actually managed to get her hair into real braids. 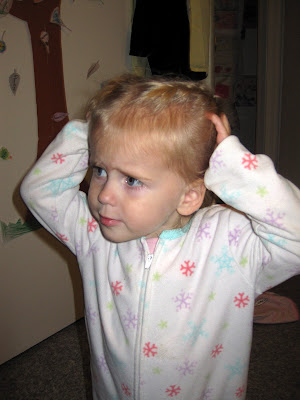 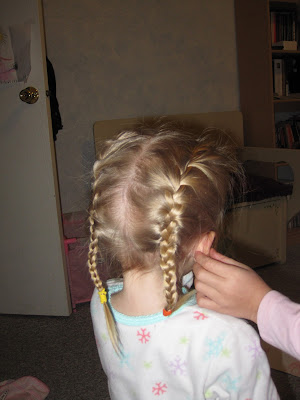 She was pretty happy about it. 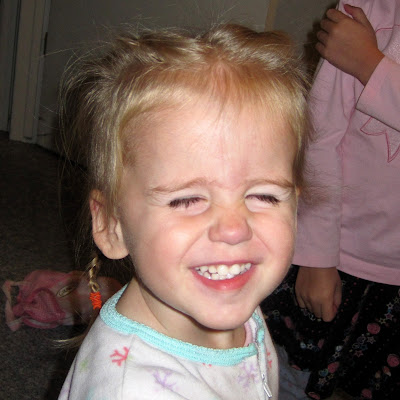 Rachel was so excited that she wanted to take them out right away so that they could both have curly hair but I told her we had to be patient and wait at least a few hours. Miriam's hair is so fine that it dries really fast so we don't have to wait all night for the curls to stick like we do with Rachel. 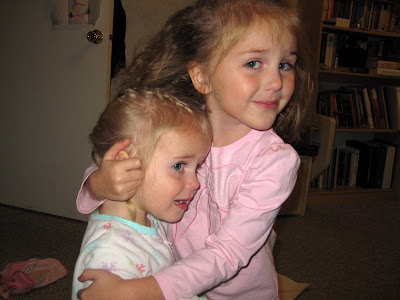 After we finished getting dressed and doing hair (well, everyone's hair except for my hair which I threw, unbrushed and unceremoniously, into a ponytail—thank goodness it's long enough for that again) we went outside to help Grandma put up the Christmas lights. We've been so lucky this year—it's already the middle of November and we haven't had a single snowfall that's stuck to the ground and our trees still have most of their leaves. If the forecast is correct, though, the nice fall weather won't last for much longer and Grandma wanted to get the lights up before it got so cold that nobody wanted to do it. 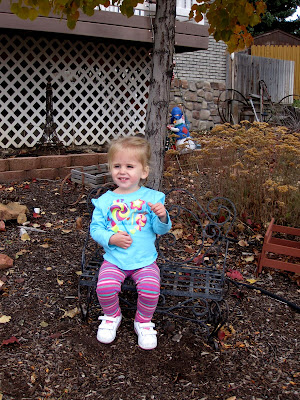 While the girls "helped" Grandma I pulled up some of the dying plants in the yard. 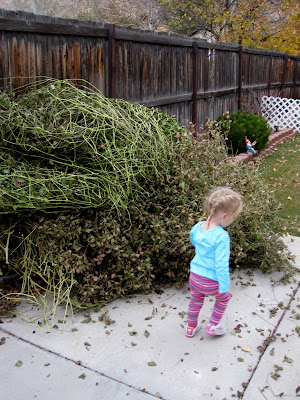 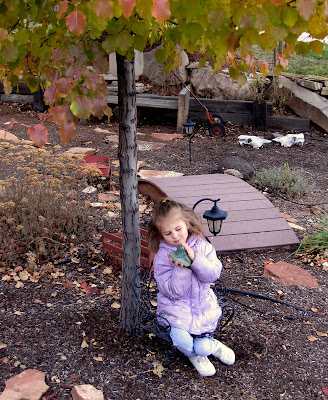 She also helped me sweep the driveway clean of the mess the plants made. And we figured out why Hermione isn't so good at flying on brooms. 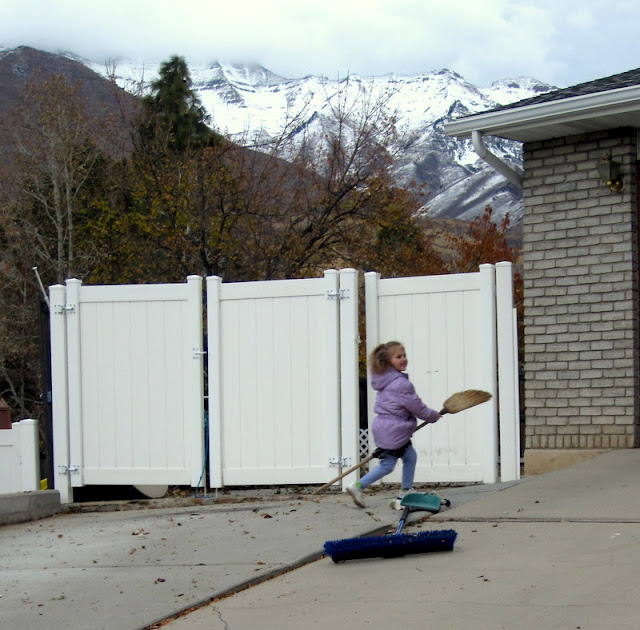 She holds the broom backwards. 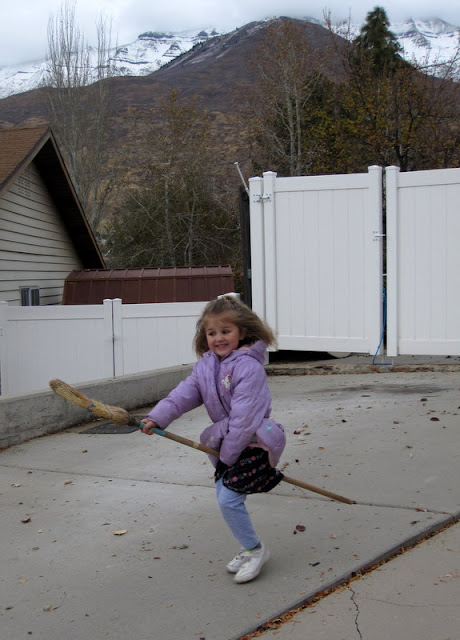 When I told Rachel she was sitting on her broom backwards she switched it around and just couldn't figure out how to lift off. I guess it's easier to hold up the brush part when it's in front of you than when it's behind you. 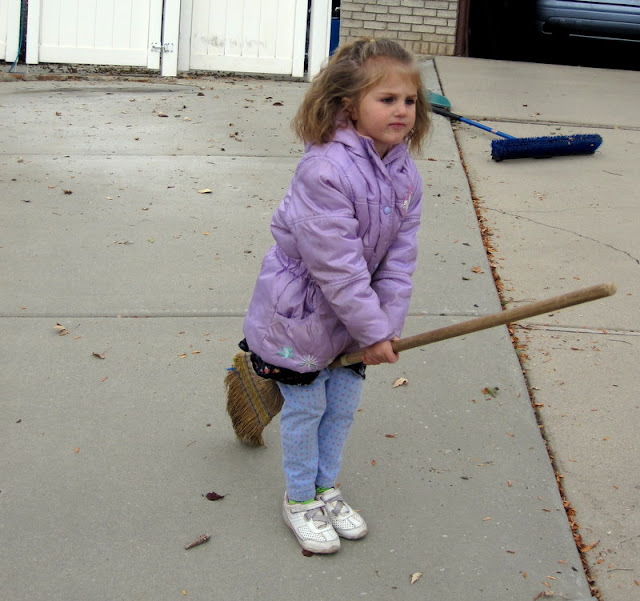 When we got inside we decided it was time to undo Miriam's braids. At least, that's what Rachel decided. Miriam wasn't too happy about having Rachel take them out. 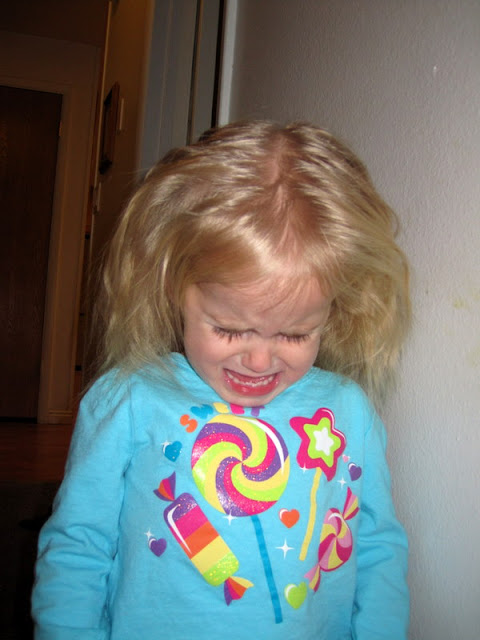 She got over it, though. And then decided she wanted to take off her socks. 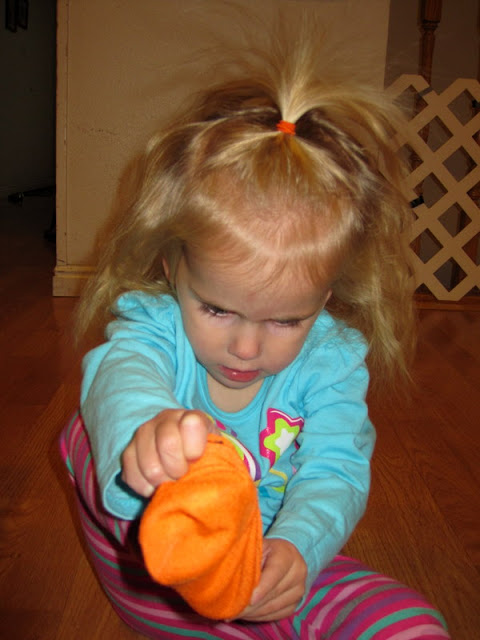 She was going so slow that Rachel decided she'd help Miriam out with that, too. Miriam was not happy about that and insisted we put her socks back on so that she could take them off by herself. 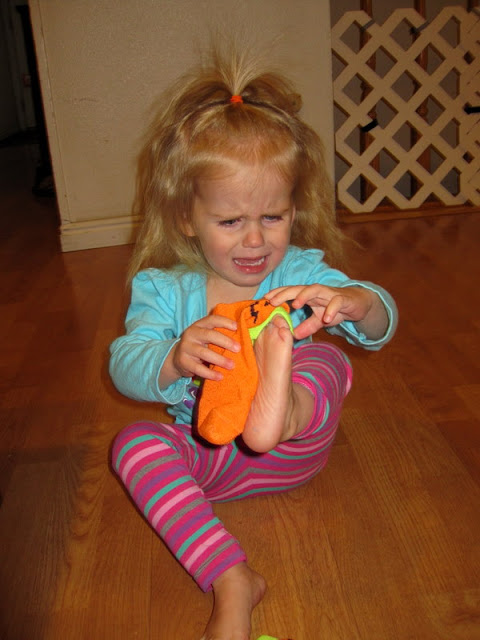 Her sweet little curls lasted all the way through lunch, which was a lot longer than I expected them to last. She's napping now and I'm betting that when she wakes up they'll be mostly gone. 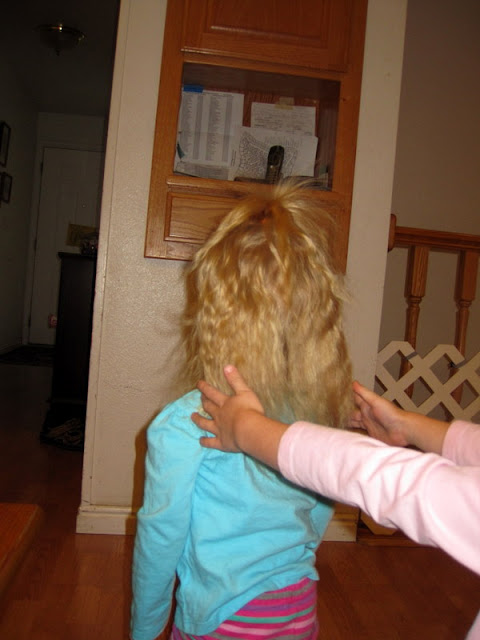 And what's Rachel up to now? Why she's dressed as Hermione (with a tie and a sweater) and is designing wands—drawing prototypes and then making them out of pencils and clothespins and things. I never saw Hermione as a wandmaker, necessarily, but I suppose it's a decent occupation. 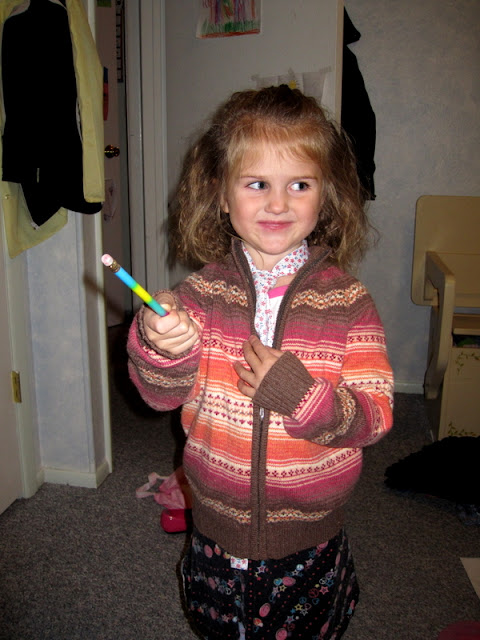