When Miriam went down for her nap today, Rachel made a card for one of her primary teachers who sent her a card in the mail telling her what a great job she did on the primary program. She had me help her spell everything and wrote it out just about perfectly. 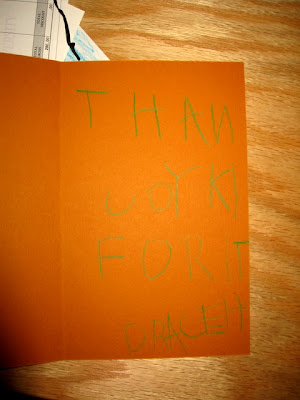 Let me help you out by making all the lines read left to right:

I only just realized that the random lines she drew was how she chose to leave a space—we've discussed the art of the finger space but she forgets about it all the time (which is fine, because she's only four). One of her spaces was put in the wrong place, but we can just take her spaces out and I'll put real spaces in:

THAN
K YOU
FOR T
HE CARD

Thank you for the card.

Rachel then decorated the front of the card with beautiful flowers...but had her paper upside down when she did so. She was distraught when she opened her card to admire her handy work only to find that her text was now upside down. I told her it was totally alright because the person we're giving this card to is an American and is used to flipping things over. Anyone else might not be but an American surely is.

To prove this, I got out our jar of coins and showed her an American quarter.

Elsewhere in the world the reverse seems to be true. At least, I know it's the case in Canada and Ghana and Egypt and Israel (but not Morocco—you have to flip their money, too). If I could find our European coins I would tell you about that, too, but I can't, though I'm guessing their coinage is of the "turn" variety.

Don't ask me why I know this—though I think it's because when I moved south of the border (the Canadian border) that is I couldn't ever figure out why those crazy Americans were printing their money upside down.

Truthfully it was probably the lamest possible cop-out answer I've ever given but I managed to calm Rachel down and escape a vicious temper tantrum so I suppose it was worth it. Besides, her text was already encrypted with a transposition cypher so I don't think having the text being upside down will be the biggest hurdle for the card recipient. Really, I think she is smart enough to turn a card over—she's also probably smart enough to figure out what it says because, having raised a brood of her own, she's likely well experienced in deciphering children's writing.