I can't believe I haven't emptied my camera in a week! We've been busy with the general hubbub that surrounds Christmas: parties, finals, things like that. The girls have been getting really excited about Christmas and—remarkably enough—don't think we have enough Christmas ornaments and keep demanding to make more, so we've been spending a lot of time making crafts (which I'm sure I'll post about in the near future). They certainly are getting excited about Christmas though.

Miriam spends all her spare time admiring the Christmas tree. 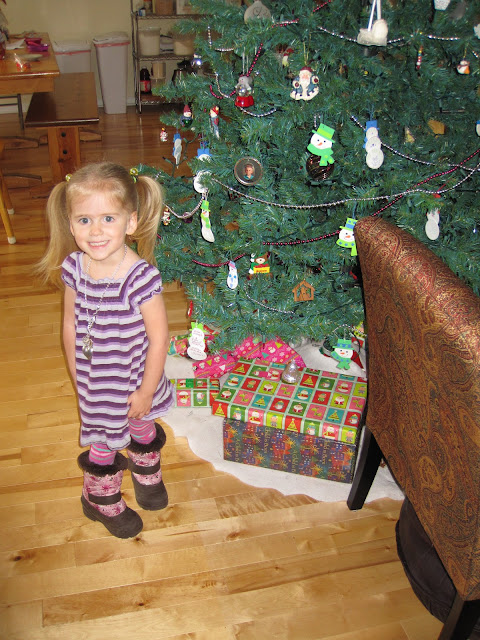 Rachel's favourite ornament (I just learned from a school paper she brought home) is the one Uncle John and Aunt Thereena sent her for her first Christmas (it's in the top right corner of the above picture). Miriam's favourite seems to be the Cinderella coach I got from a friend years ago. I had to move it so that it was at her eye level because it used to be up higher and she kept climbing on the arm of the couch to look at it. 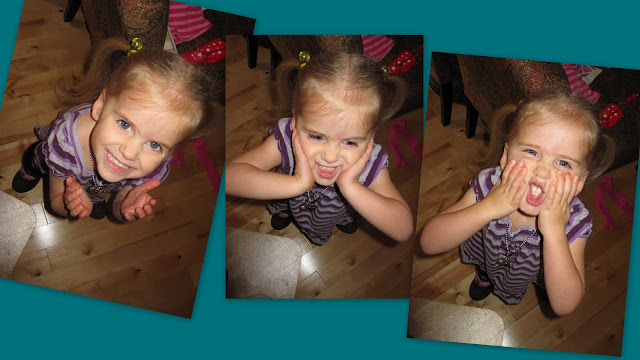 We have two advent calendars going on and the girls alternate taking turns doing each advent calendar (which translates into them each getting a turn every day). One is the cabinet style one Karen gave to us a few Christmases back (five or six years ago; we used it at least one Christmas before we packed it away and finally unpacked our Christmas stuff for the first time this year). We filled it with treats as well as a "Scripture Ornament" to read, which we then tape onto a tree.


The other advent calendar also came from Karen; she made it years ago and Andrew's family used it growing up (which is why she gave it to us: it says Heiss on it) but she got a new one in a similar style so passed this on to us on our second Christmas together. Miriam prefers opening the stockings to pulling the drawers out of the cabinet (though she does like finding the correct place for the scripture ornaments to go). 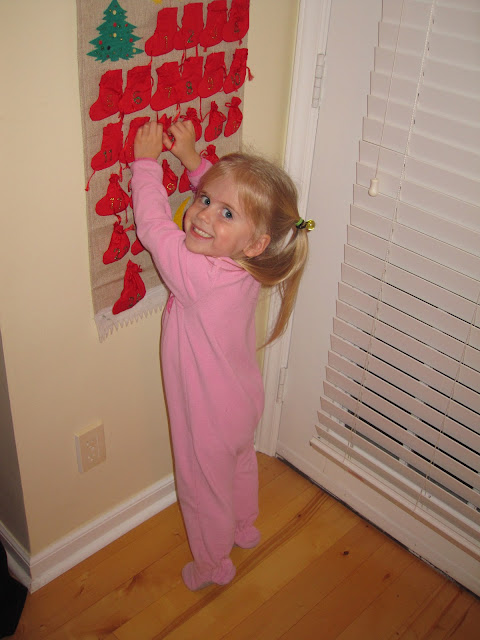 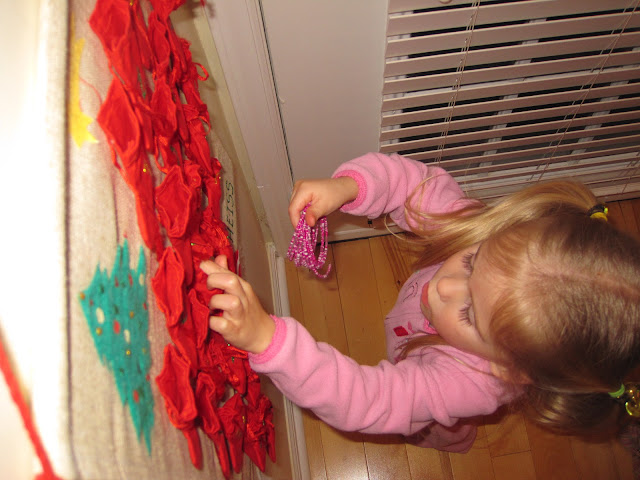 We've been doing a lot of nativity reenactments around here. The girls are always coming out of their bedroom draped in scarves and Egyptian dresses. The other day Miriam borrowed a laundry basket to be a manger. She snuggled a baby doll inside the basket, wrapped up in some of her favourite blankets. She, of course, was Mary. 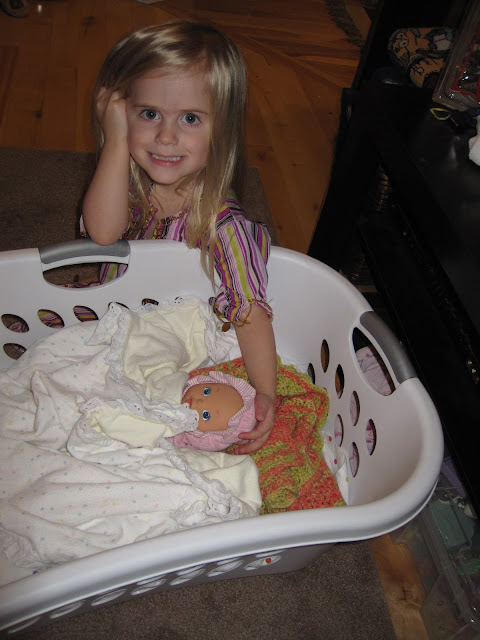 Later in the day, Mary turned into a bit of a rockstar. Miriam added some Princess Leia earmuffs and some bling to her ensemble. She said she was still Mary; she was just singing baby Jesus to sleep. 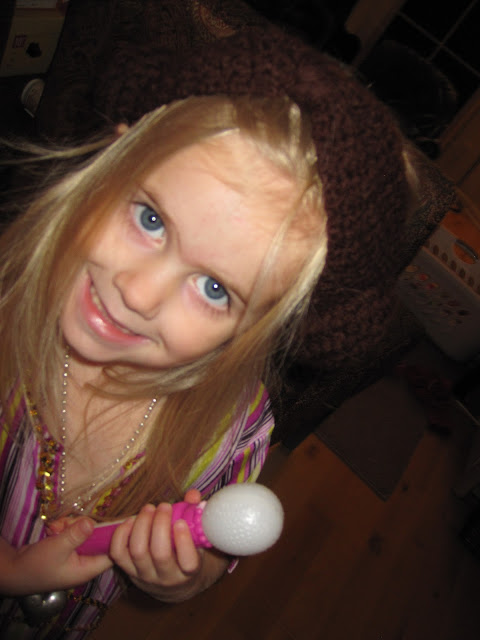 We walked to the park the other day and had to keep stopping to pick—of all things—dandelions! I remember remarking to Andrew about the lack of dandelions this summer. "I guess they don't have many dandelions here," I said. Oh, but they do. Just in December...not August. 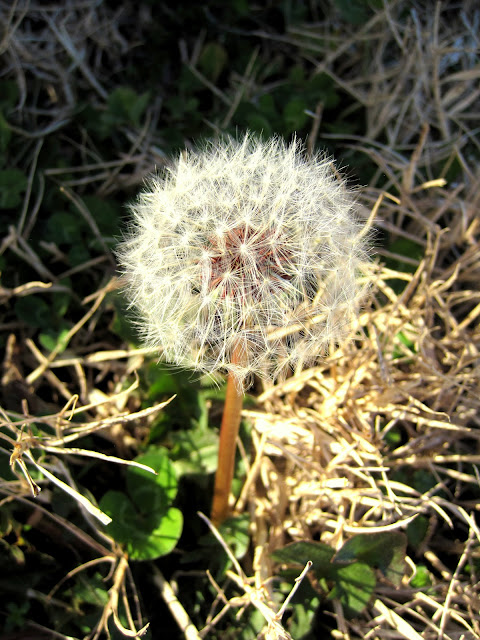 Miriam picked a big fluffy one and admired it for a minute while mumbling her wish. "I wish, I wish with all my heart," she whispered dramatically, borrowing a phrase from Dragon Tales, "I wish that I could see my Grandma!" 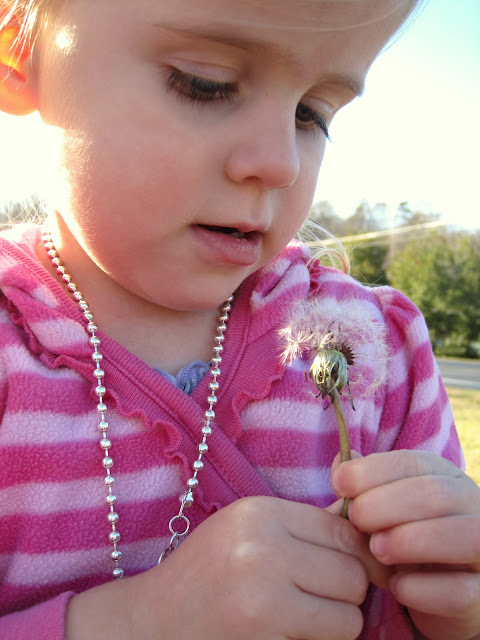 "But it can't come true because Grandma lives too far away," Miriam said. 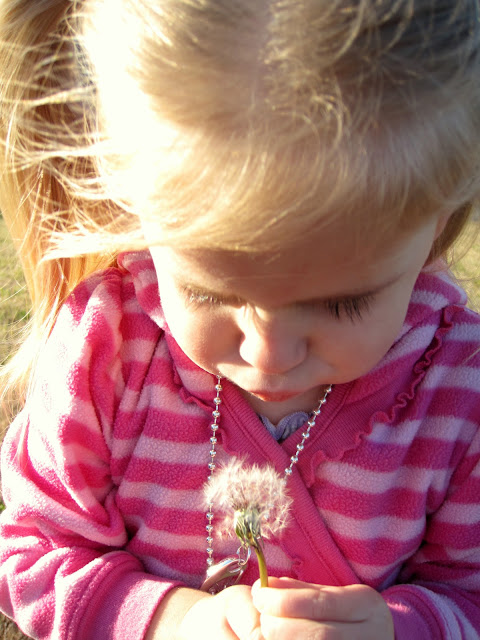 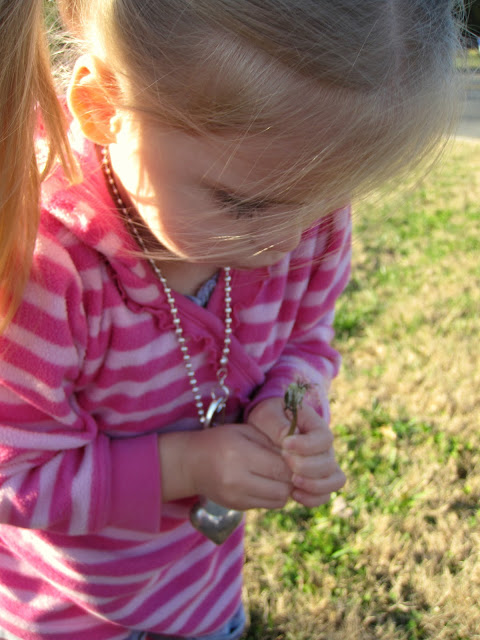 There's a secret at our house and the secret is that Grandma is coming for Christmas.

The girls don't know; we've been using the code word "genitori" which means "parents" in Italian. Miriam's really been missing her Grandma. She loves all her grandparents, of course, but she's three years old and we lived with Grandma for two of those years. She's used to having her Grandma around and it's been quite an adjustment for her not to be able to run off to find Grandma whenever she found Mommy to be unsatisfactory.

She's going to be one happy girl on Tuesday afternoon...

Grandpa's coming, too. We're also excited for that. (But a little more excited for Grandma.) 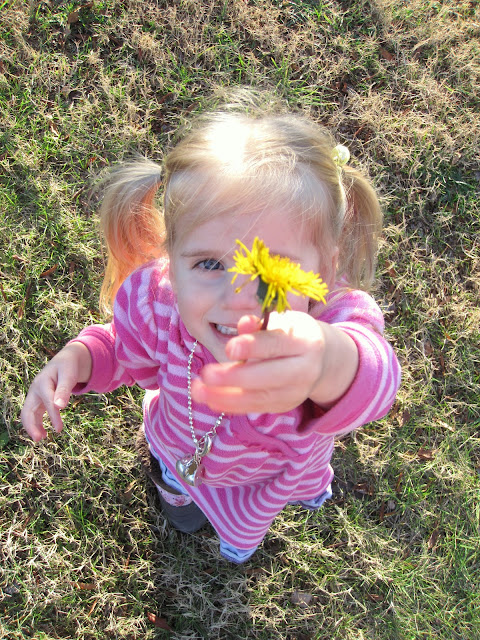 Miriam found a bright yellow dandelion and picked it for me. I do believe this is the first time I've been given a dandelion in December. 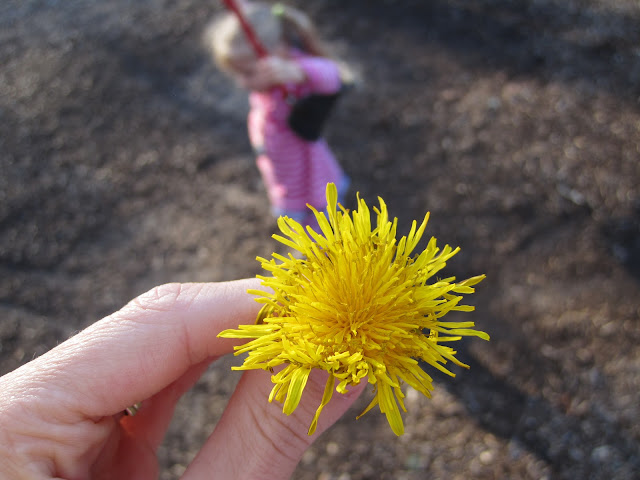 We spent a few minutes playing (mostly on the swings—surprise, surprise) before walking back home to meet Rachel at the bus stop. 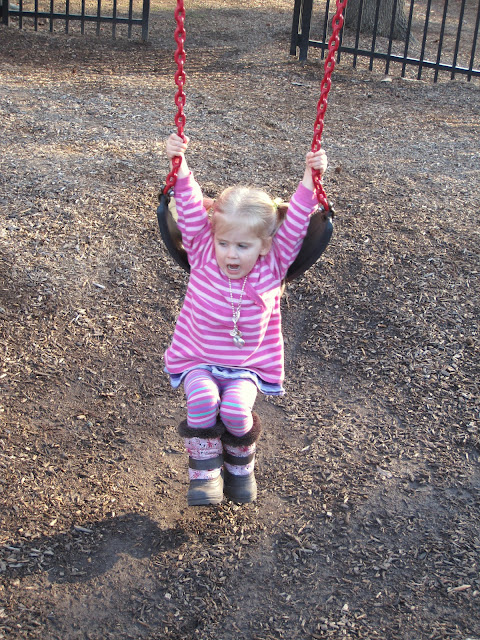 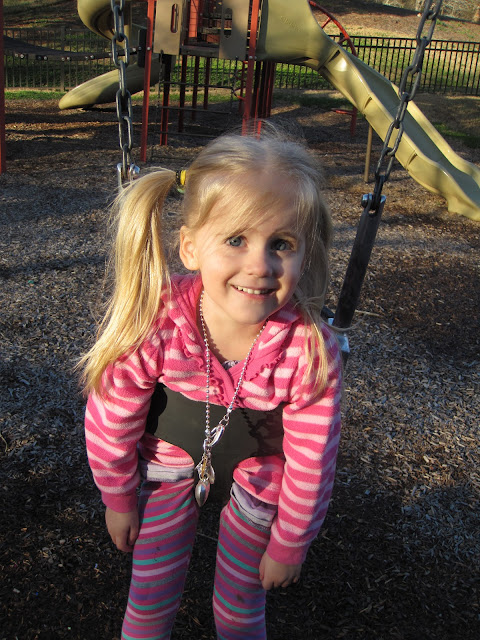 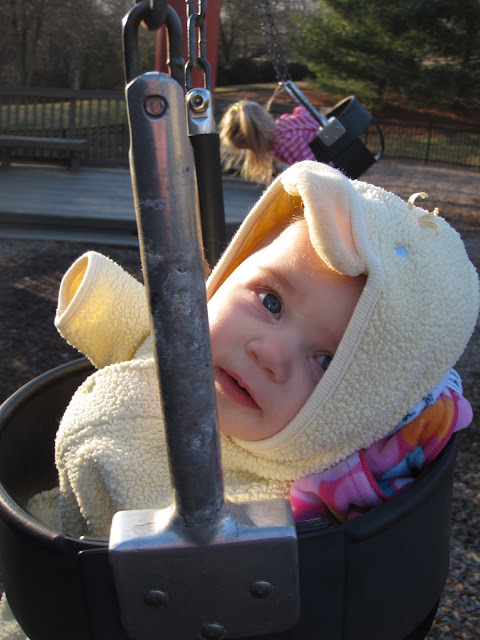 We drew with sidewalk chalk while we waited. 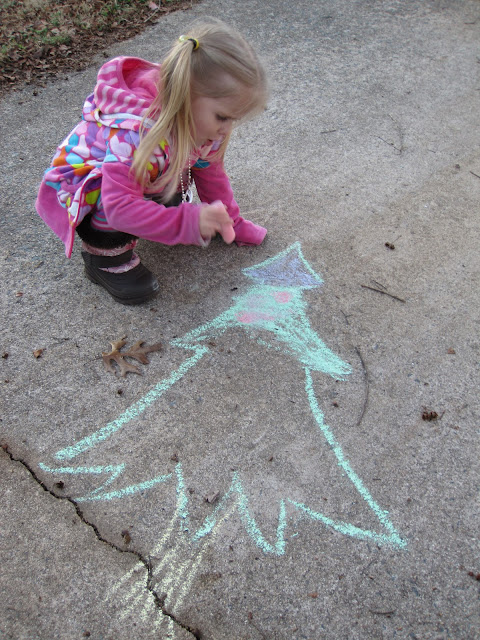 Then we spent a few more minutes drawing after Rachel joined us. 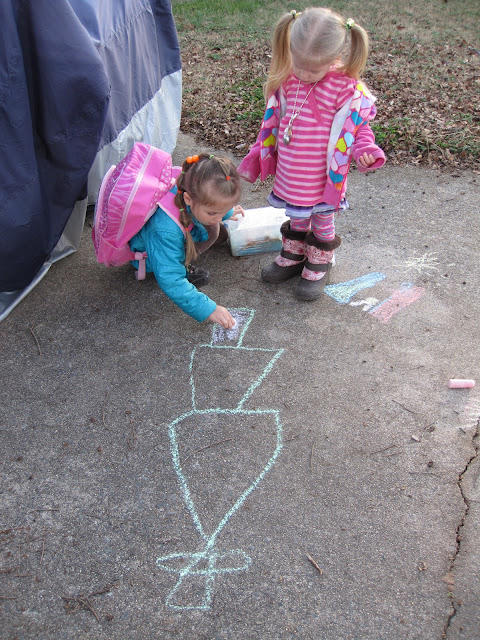 Rachel drew a hopscotch grid and we played on that for a while as well. It was rather complicated. She wrote a box at the beginning that said "first" then numbered the squares from 1 to 13 and put a box at the end that said "finish." 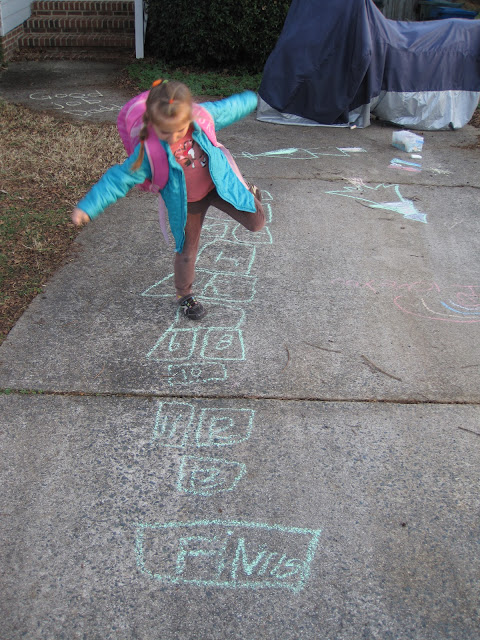 Later she added boxes at the start and finish that said "yes" and "no" and "stop" and "go" as well as frowny and smiley faces. I didn't quite understand why she was putting them where she was even though she kept explaining it to me, "I have 'no' here because you don't go from here—you wait for your turn here. Then you go, so it says 'go!' That's the first thing—see, 'first?' Then you're happy because you're starting and sad when you stop because you finish. Want to know if you can have another turn? Yes, you can—see, 'yes?' So go wait at the beginning again."

Hopscotch should not be that complicated.
Posted by Nancy at 11:59 PM