Our first stop yesterday was the Kennedy Space Center, which ignited a desire in both our girls to become astronauts. The space center is huge. It's basically the entire island—and whatever they don't use as launch pads or runways is a conservation zone so there's a lot of wildlife around. We saw a little inlet swarming with alligators and manatees. Since the space center is a no-boat zone the manatees are safe from boat propellers at the island; however, I can't say how safe they are from alligators. Apparently they are second only to the Everglades for the number of alligators (thousands!) in one area and are second only to Alaska for the number of bald eagles (they have 41 nests, if I remember correctly).

Considering everything within a 3-mile radius of any given launch pad is burnt to a crisp, I have to wonder how conservative their conservation is, but I suppose they have things pretty well figured out. 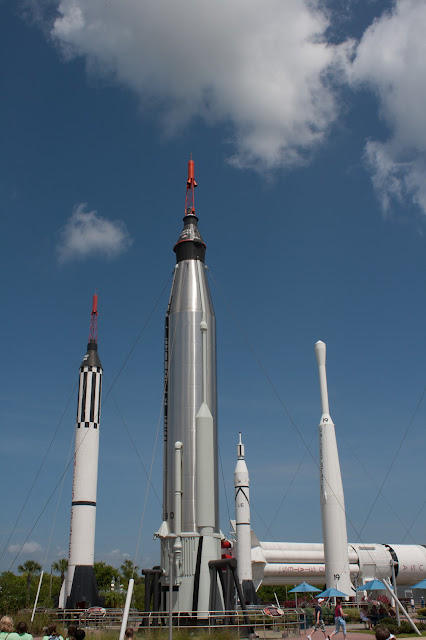 We took a shuttle (the bus kind, not the space kind) out to the "60-foot-tall Launch Complex (LC) 39 Observation Gantry," which is only open on Fridays and Saturdays (so we lucked out that we arrived on a Friday). 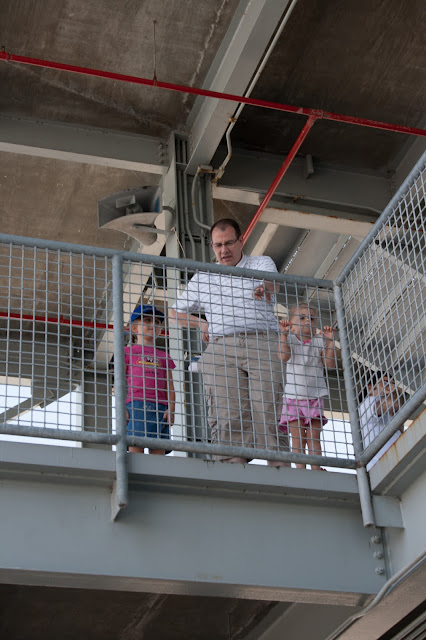 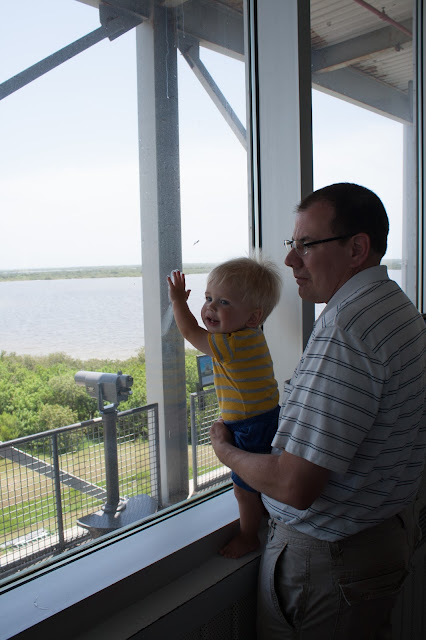 From the top you can see Launch Pads 39A and 39B. We learned that they purposefully release steam before the ships/shuttles take off to create a sound barrier of sorts, otherwise the rockets would vibrate until they fell apart; the steam acts as a buffer. Or something like that. Benjamin was pitching fits all day so I only half-listened to anything. 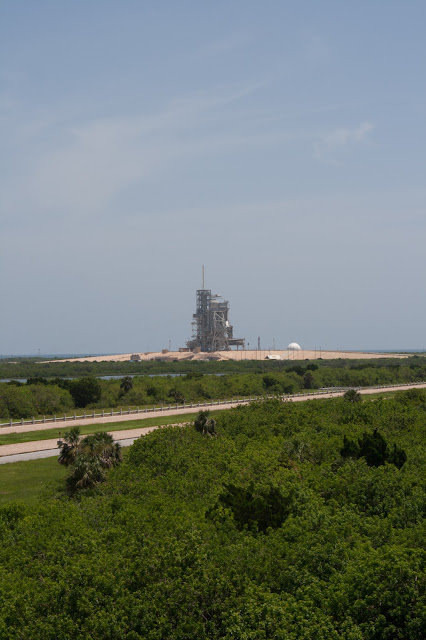 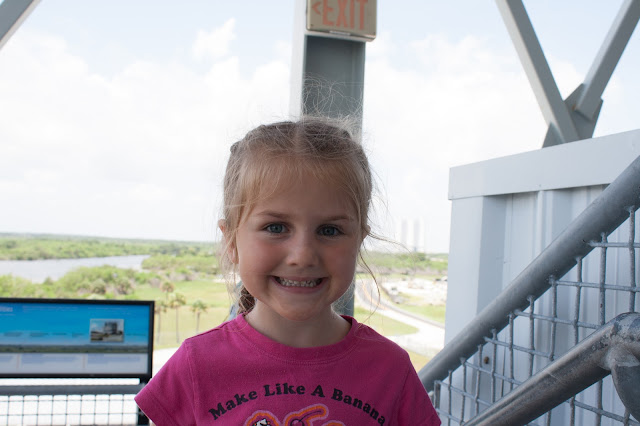 From the gantry we caught another shuttle to Saturn V/Apollo 8 Museum. The Saturn V ship was huge. They had it hanging from the ceiling. 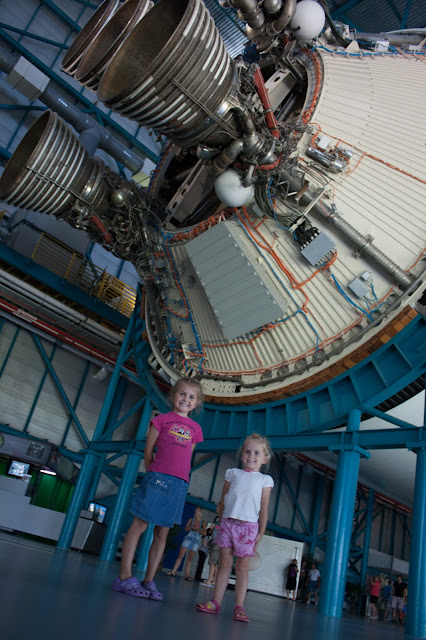 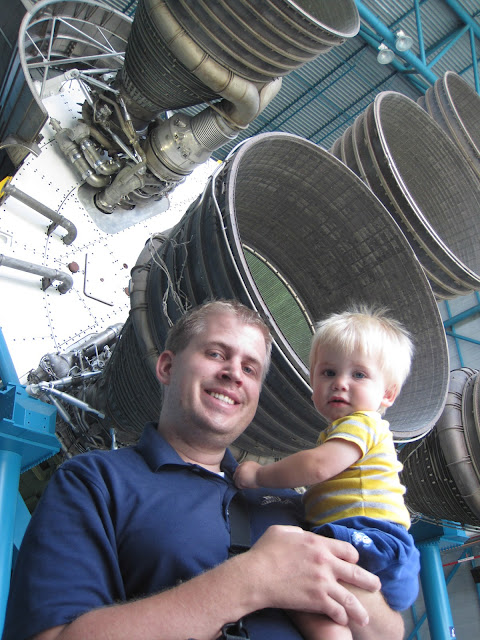 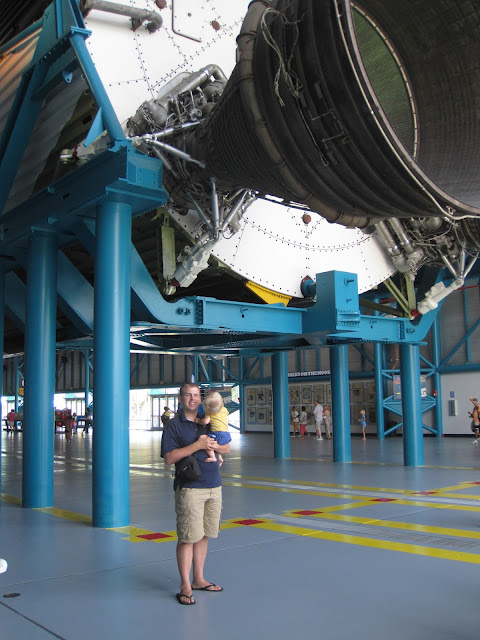 The presentations were both pretty cool. In one they simulated the launch of Apollo 8 (I think) and that was really cool. We sat in the front row and they had the computer lab all set up (with original computers) and each station would light up as they played the recording of what happened. When the "actual" launch was happening the room started glowing orange and everything was shaking. It was pretty cool. Benjamin had been nursing through the show but when things started shaking he stopped to have a look around.

The other presentation showed the first lunar landing using video and also replicas on a stage. It was pretty neat. When you got out of the theater you were ushered into the "cold museum" where they had a lunar lander and original space suits with moon dust on them and other things like that. It was pretty cool.

Would you believe we forgot to touch the moon rock? Well, we did.

Andrew said that it gave us all the more reason to go back to DC soon so that we can find the moon rock in the Smithsonian.

It started raining on our ride back to the visitor's center and we all got fairly wet. Benjamin was not impressed. 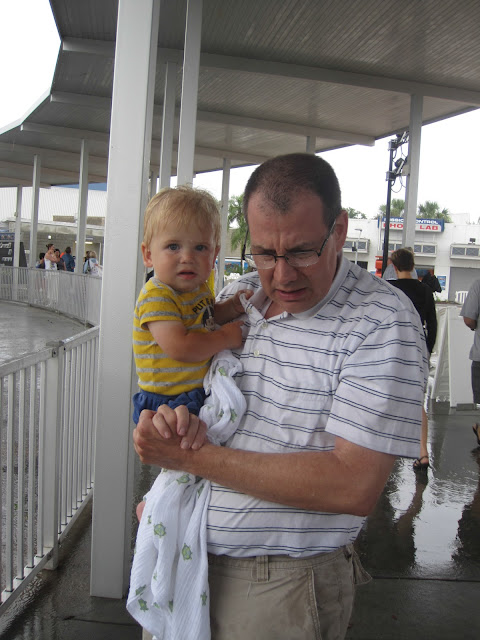 Rachel, Grandma, and Daddy went on a flight simulator but I'm not very fond of simulators and Miriam wasn't tall enough so Grandpa (who doesn't enjoy simulators either) and I stayed to watch Miriam and Benjamin while everyone else went on the simulator. Because it was pouring there wasn't a lot we could do, so we stood and waiting under one awning and then ran over to another and stood there for a while. When we were standing under the second awning they opened the new Atlantis exhibit so we went to check it out, but we weren't quite sure what it was and were afraid it was going to be another ride or something so we left to wait outside again.

There were these tiny black flies that kept biting us. They were horrible. So we went inside to wait again.

Soon Rachel, Grandma and Daddy caught up with us and we went through the sneak peek of the Atlantis exhibit. Since it was a bit of a dry run and the exhibit doesn't technically open until next Saturday, not everything was open, but what was open was awesome and after everything else is open I imagine it will be even more awesome.

First you go through a little presentation where they talk about the challenges of building a reusable space ship, which was really interesting. Then we went into a theater where we went on a little "flight" through space. At the end of that we saw Atlantis appear behind a screen of stars—only you couldn't really tell if it was just a picture of Atlantis or if it was the real thing until they lifted the screen, and there was the ship, right there. 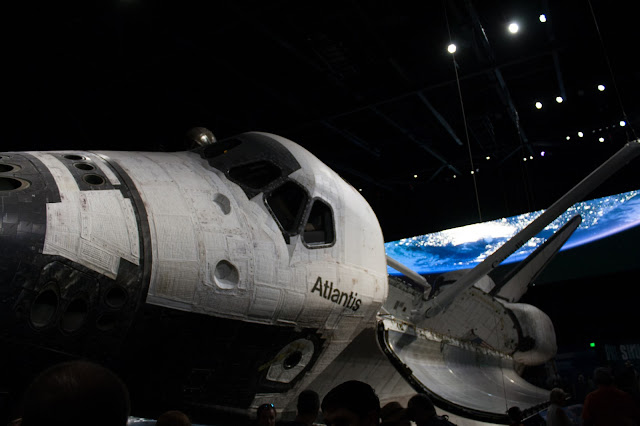 It was amazing. Atlantis had 33 voyages in 26 years. It's crazy to think we can just go and come from outer space whenever we want, especially now that the Space X program is open. NASA's basically given up low-level space to whoever wants to pay to go out there while they focus on going even farther: where no man has gone before. 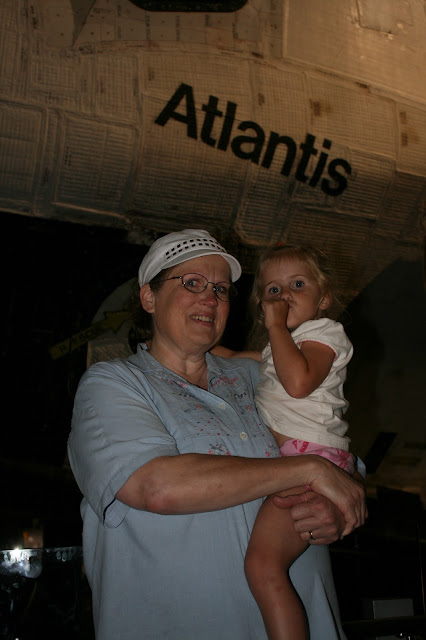 I was happy to see the Canada arms on the space shuttle. I've been thinking a lot about my home and native land these past couple of days, with all the flooding going on in Southern Alberta. 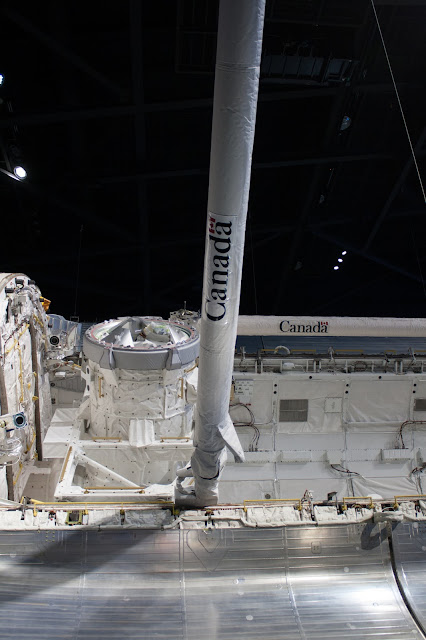 The ship was much bigger than I thought it was going to be, but when you consider someone living on a ship that size for months at a time it suddenly seems a lot smaller. Still, it's an impressive sight. 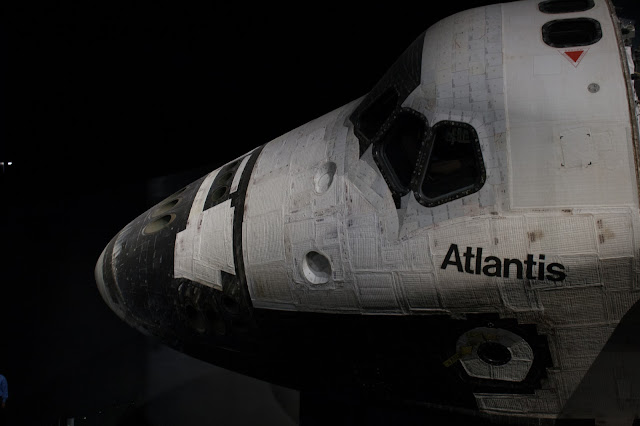 And it's so pieced together! From far away it looks sleek and metallic, but really it's a bunch of foam-like squares all stuck together. It's amazing how they figure this stuff out—but like a sign on the wall said, this is rocket science. 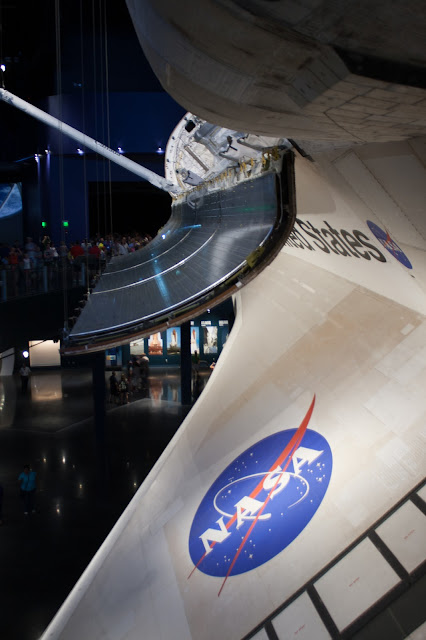 On the way downstairs from the main gallery there are a bunch of fun-looking things that we couldn't do because they weren't open. There was a clear tunnel for children to crawl through, jutting out over the open gallery, and a slide that mimics the return path of space shuttles reentering the atmosphere, and many other activities. Our children were excited about things enough as it was, though I did have to pull Miriam away from the tunnel.

"You can't go on that yet. It's not open," I said, snagging the back of her shirt.

"It will be open soon," the employee standing guard near the gate assured her (as if we'd just be back next week or something).

"But I fit through the fence!" Miriam objected.

"But the fence is there to tell you not to go through it," I told her, dragging her away. 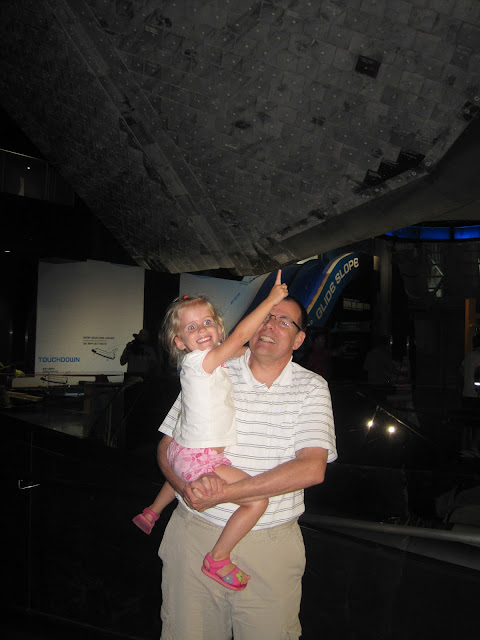 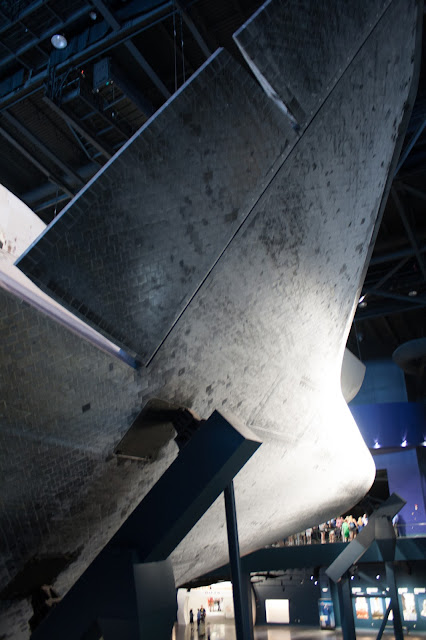 On the bottom floor we did a little exploring of the exhibits that were open. The original wheels of one of Atlantis's journeys were on display—they're huge (and well-worn). There was also a display detailing the mechanics of waste elimination in outer space. Here are Rachel and Andrew trying out a space toilet: 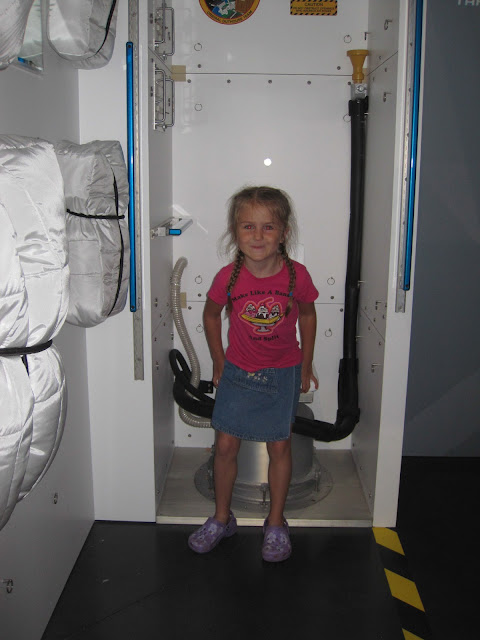 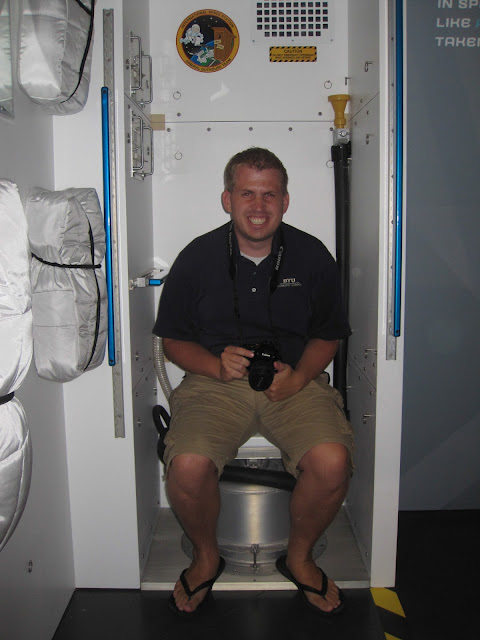 We were approached by a reporter while we were walking around down there, which was interesting. I don't remember what news company he worked for, but we'll have to look around and see if he uses our interview. (And he does: here).

Hungry and tired, we started heading out of the park so that we could eat our picnic lunch and get to the beach. 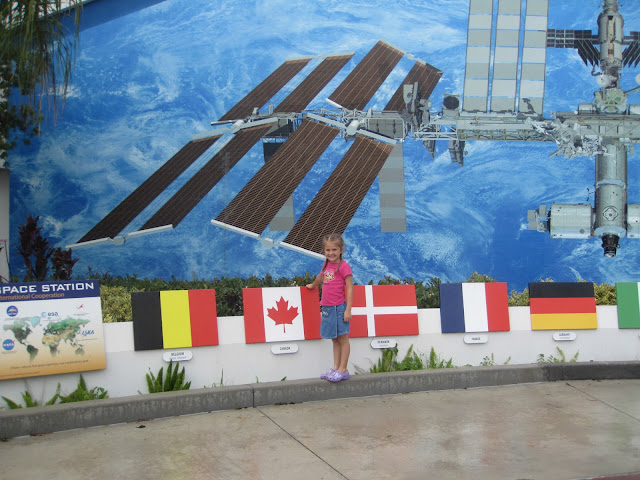 On the way we stopped at a play place and the girls actually explored inside. I think that's the first time ever! Of course, they wouldn't go down any of the slides or into any of the little space ships, but at least they went inside to do some climbing. 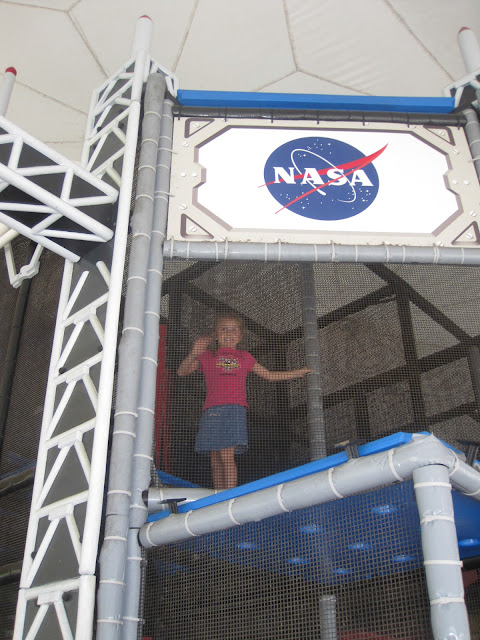 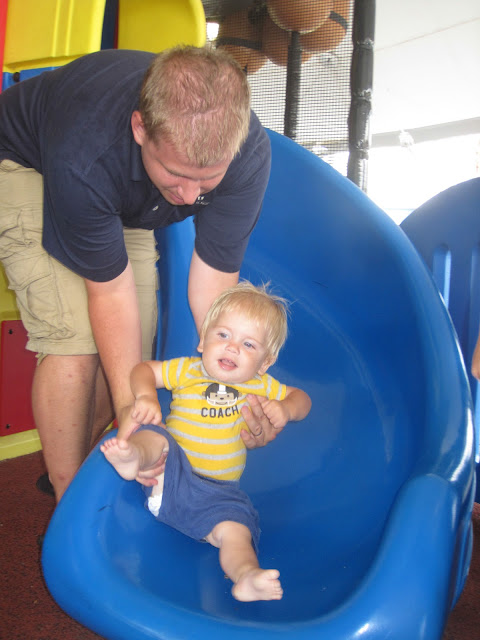 Here's our little family by the NASA logo just before leaving the park: 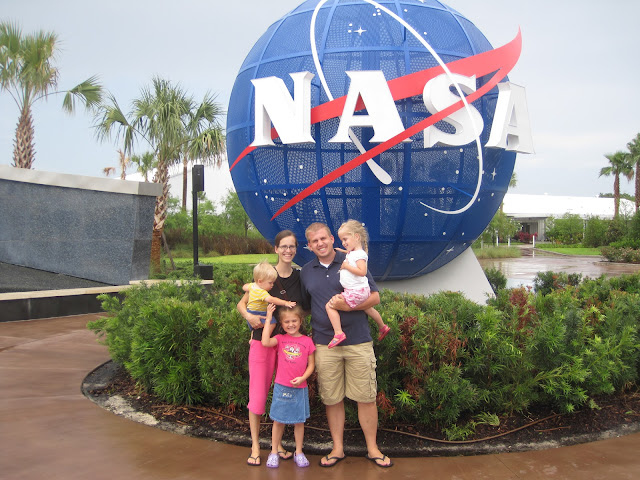 Thanks to the big thunder storm, the parking lot was covered with puddles. Andrew and the girls ran off and jumped through them all, getting fairly soaked in the process (which I suppose is fine because our next destination was the beach, anyway).
Posted by Nancy at 3:35 PM