Benjamin had a lovely nap this afternoon. I guess our swim earlier in the day wore him out. He didn't wake up until Rachel came home from school, which was rather late. And he slept all funny on his arm and his hand left a lovely mark on his chest, which was rather funny. He didn't really want to wake up... 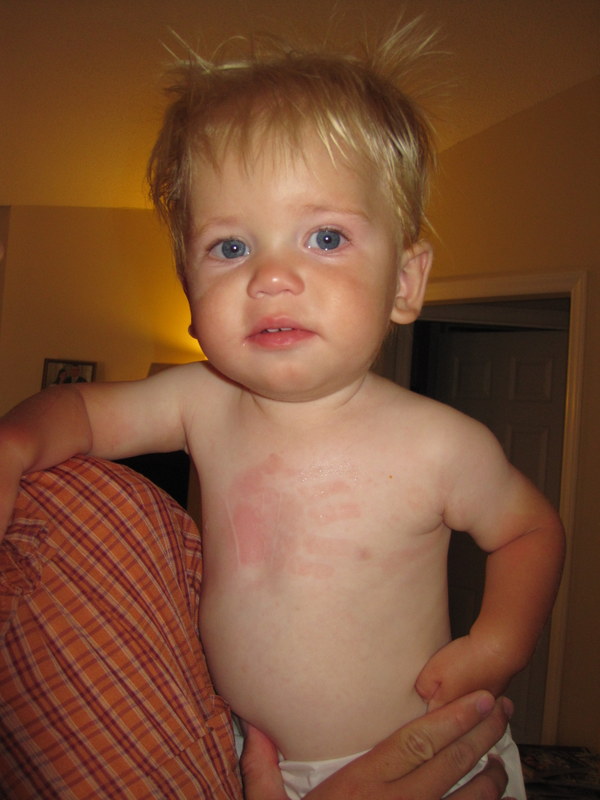 We packed some sandwiches for dinner while we talked about the day. Rachel sure has a lot to tell us when she hasn't seen us all day! I'm sure her enthusiasm to tell us every little of her detail will wane as the school year drags on, but it's fun for now. Once our dinner was packed, we headed to the Eno to have family home evening.

In July we celebrate Pioneer Day—the day the Mormon Pioneers reached the Salt Lake Valley (July 24, 1847). In Utah it's an official state holiday, with state-sanctioned fireworks and everything, but everywhere else in the world we celebrate on the closest Saturday. This year we're having a pancake breakfast and will be playing some pioneer games. Sometimes various groups go on "trek," where they live, for a time, as the pioneers did, pushing handcarts, wearing bonnets, fording rivers, and basically reenacting the trials the pioneers faced.

We have a family goal to dedicate twelve family home evening lessons this year to family history (Rachel's idea) and I thought the next couple of weeks would be the perfect time to highlight our pioneer ancestry. We had a progressive picnic dinner while we walked through the park, stopping every so often to eat another part of our meal while talking about another ancestor. It was a lot of fun! 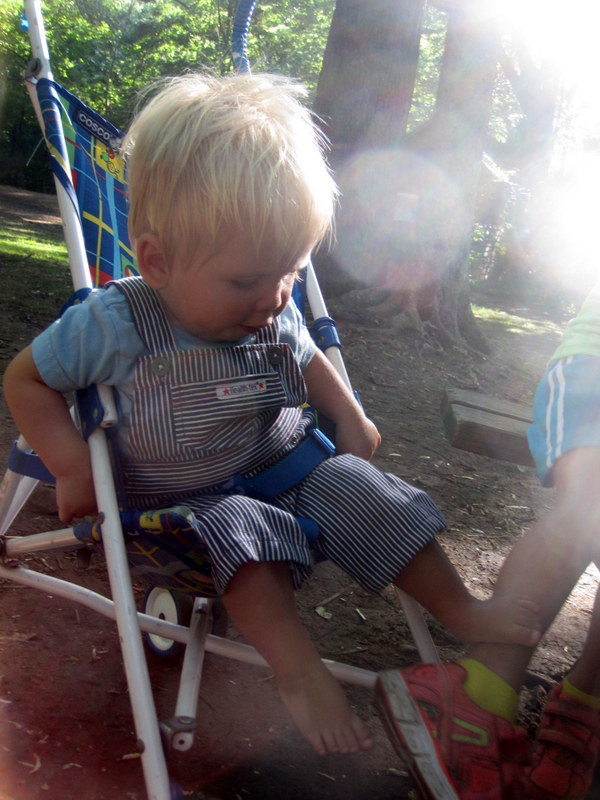 At our first stop we skipped over all the "appetizers" we had packed and chowed down on the main course—turkey sandwiches—because we were all starving. 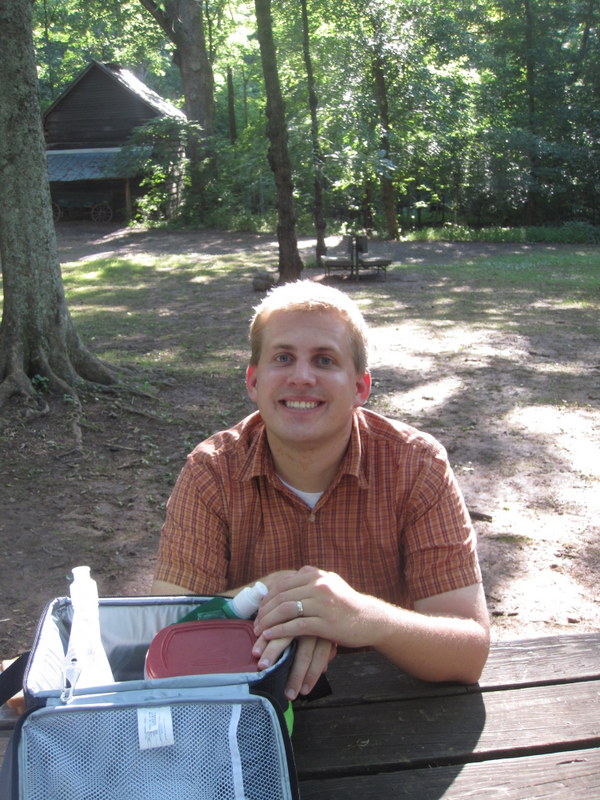 The ancestor we highlighted was Lucinda Haws Holdaway. She's my great-great-great-grandmother (my mother's father's father's mother's mother) and she kept a journal during her trek across the plains, an excerpt of which I found online and read tonight. Technically this story is about the journey back to Salt Lake after traveling from Salt Lake to Iowa to get some machinery. Seriously, traveling to the Salt Lake Valley was bad enough. She travelled there, then back to Iowa, then back to Salt Lake all in the course of three years. And she drove her own team, defeated cholera, and cooked for a group of four men (besides herself).


Here we are enjoying playing in front of the tobacco smoke house: 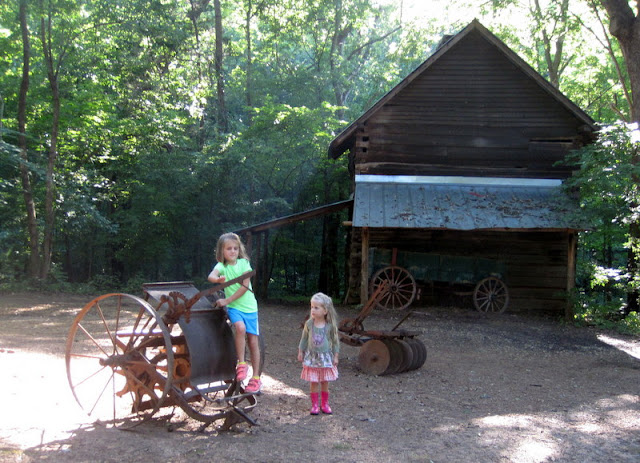 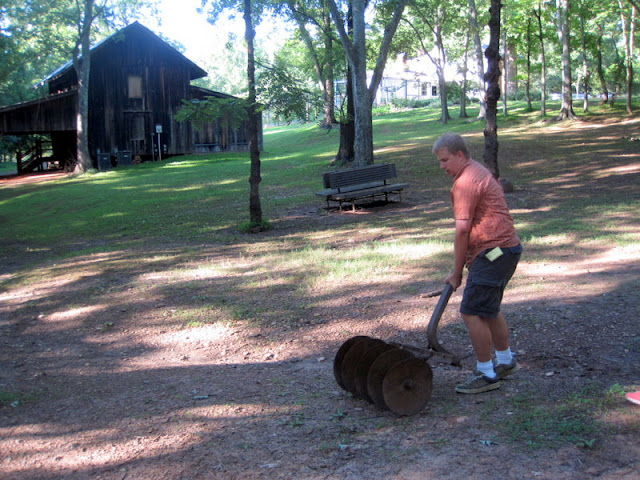 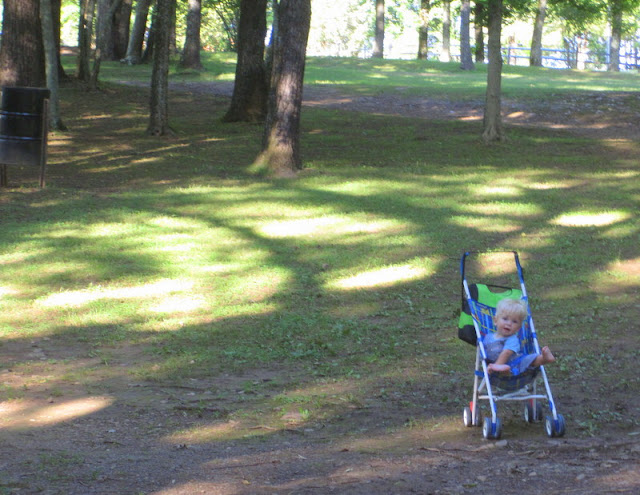 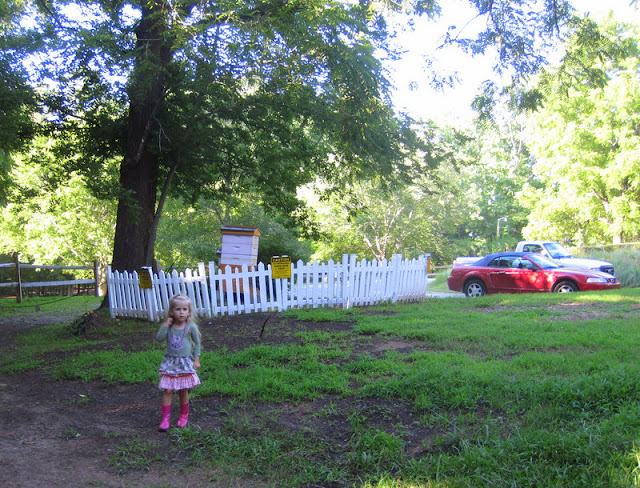 Once she realized there were hundreds of bees swarming behind her she scurried back over to us: 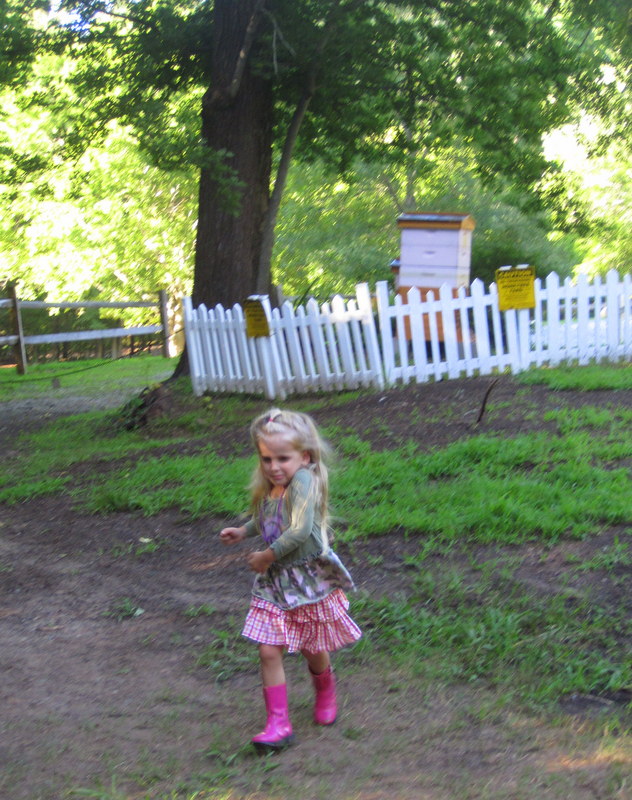 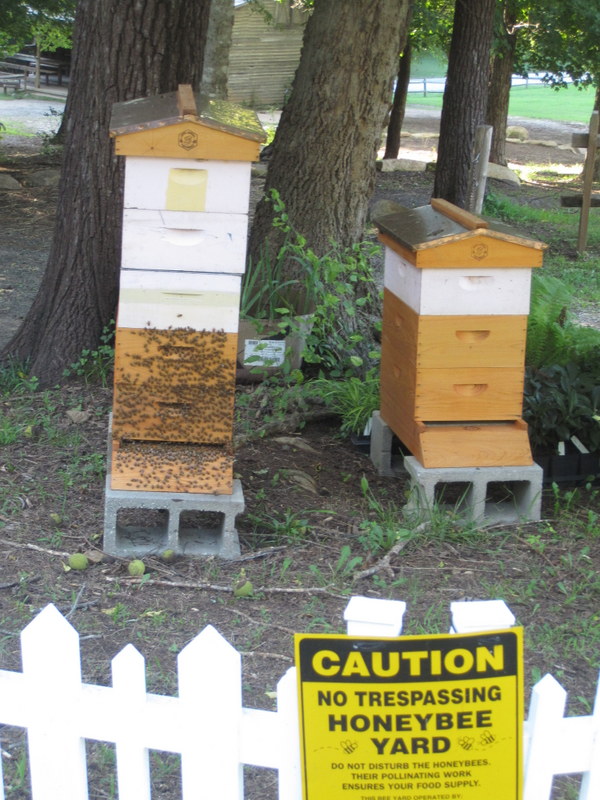 Inside the garden we found the old Mangum well: 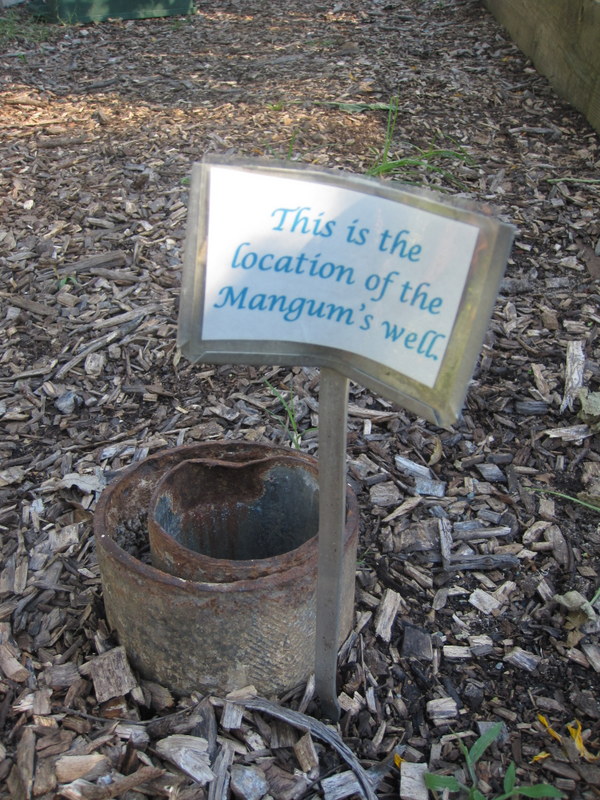 ...and a lovely array of flowers and vegetables. 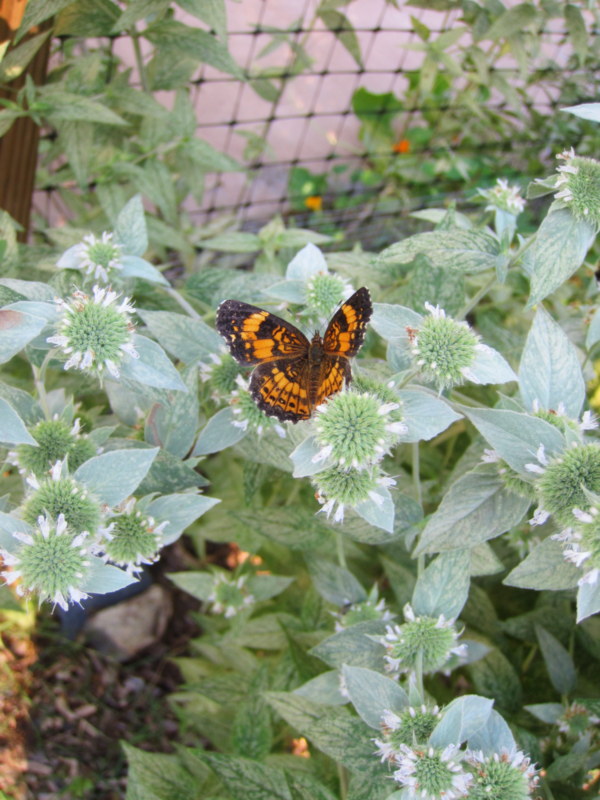 We went to the picnic shelter for the next part of our dinner—hard-boiled eggs—but apparently the beehive was placed a little too close to the picnic shelter and we were absolutely pestered by bees inside the shelter. We moved outside to sit on some rocks, where Andrew managed to cut his leg. Blood was dribbling down and getting on his sock and it was very perplexing to the girls so I pulled out my first aid kit.

That was my entire inventory. I had something like ten Winnie the Pooh bandaids, three or four Hello Kitty Bandaids, and a CPR face shield. It took me awhile to read the entry, in part because I kept giggling to myself over his spelling (Masura River instead of Missouri River and his yoake of oxins and so on) and in part because we were still being plauged with bees. Oh, they were everywhere!

In the middle of my retelling of Joseph Stacy Murdock trading his own shirt off his back to sweeten the deal for a new team of oxen, Andrew interrupted.

"You know," he said. "It's rather funny that we're talking about pioneer hardships and..."

I totally thought he was going to remark about the blood trickling down his leg but instead he said, oh, so calmly:

"...you have a bee crawling in your armpit."

That was the last straw. We moved our party over to a sand sculpture we saw in the distance (it must've been put up for the Festival On the Eno (which we didn't attend because we didn't know it was going on until it was too late)). 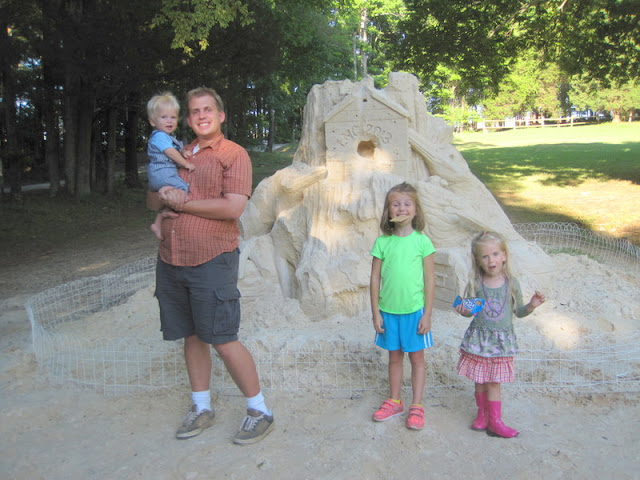 I've been stung by bees before while just standing there, minding my business. What if I'd accidentally bothered the bee (that was in my armpit (so who is really bothering who?)) while acting out this charming little dialogue:

I set down on the ground and a man rode up to me and said, "Boy, take this horse, and sadle and goo over the river and trade them for what you can get."
I said, "Maby you need that your self."
He said, "That is non of your bisnes."
I said, "All wright." 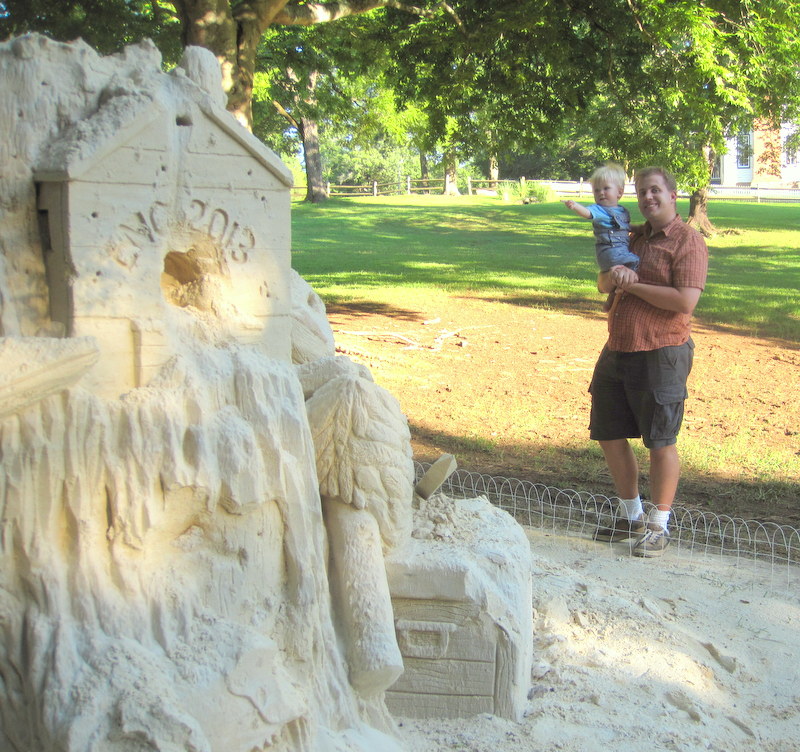 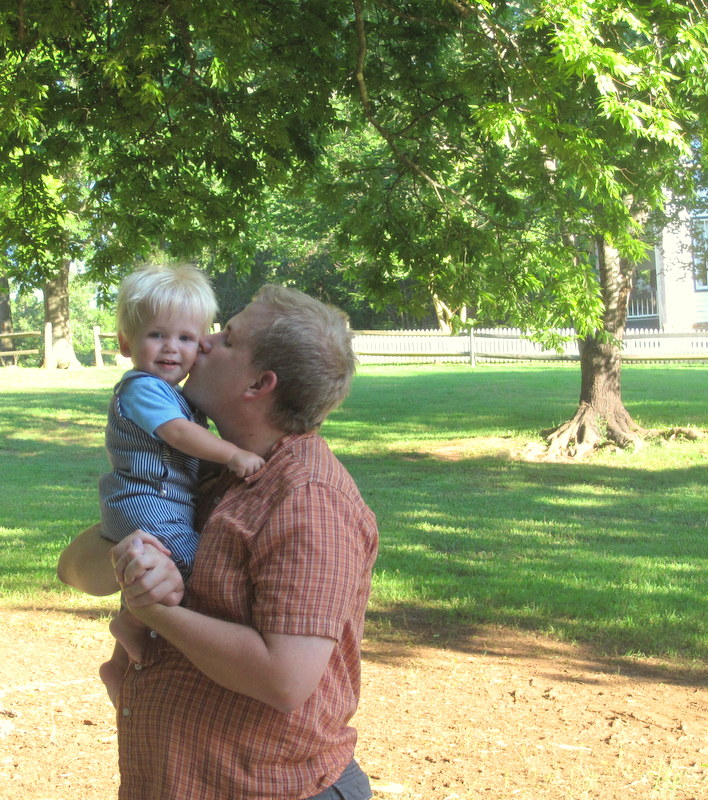 We discussed our final ancestor (of the evening) while eating grapes on this bridge: 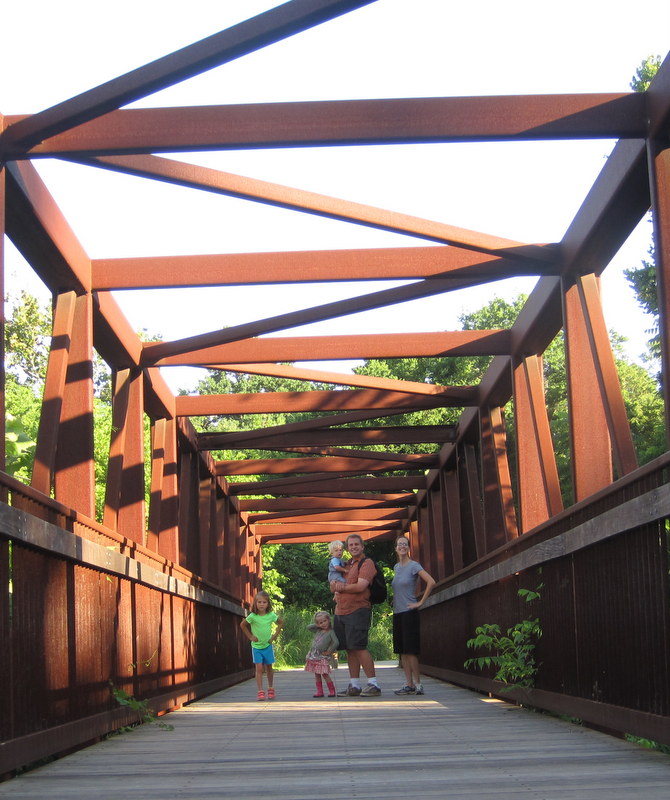 Technically, I suppose she's not our ancestor at all, not directly, anyway. Her name was Phoebe Adams, wife of Solomon Hancock (my great-great-great-great-grandfather), and niece of our direct ancestor, Alta Adams (my fourth-great grandmother). Alta died in 1835. Solomon married her niece, Phoebe, in 1836 (but that's a story in and of itself). By 1844, Phoebe was pregnant with her fourth child and she and Solomon were on their way into town to buy some new things for the baby (as well as provisions). Solomon had promised Phoebe $5 to spend on their baby but along the way kept feeling prompted that they needed to save that money for something else, so he explained this to her, telling her that she could use the money from selling butter and eggs to get some things for the baby. She was livid, but did just that.

On the way home she was still upset and could hardly turn to look at her husband, when they came upon the prophet Joseph Smith being led off to jail. He asked if they had $5 to spare so that he, and the company being jailed with him, could get something to eat (in those days you had to supply your own food in prison). Solomon and Phoebe were able to give the prophet the $5 they had saved, which was a wonderful blessing all around (see here). 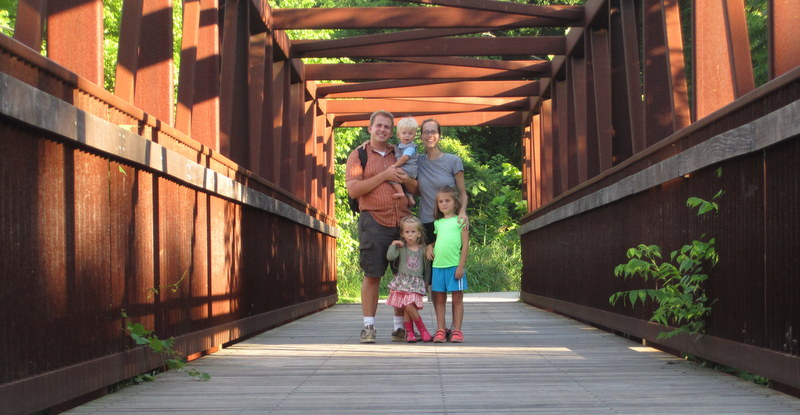 We enjoyed the view of the river for a minute (on our first summery day of the summer (and only sunny day we'll see this week)) before heading home for bedtime. 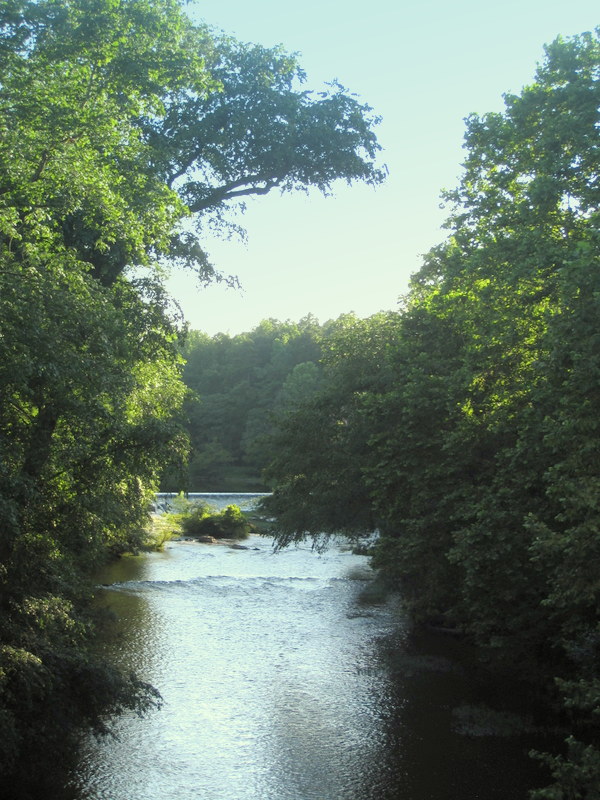 On our way back to the van, Rachel found a cicada that was buzzing its last buzz. It kept twitching and making half-hearted attempts at calling to a mate while she was holding it. 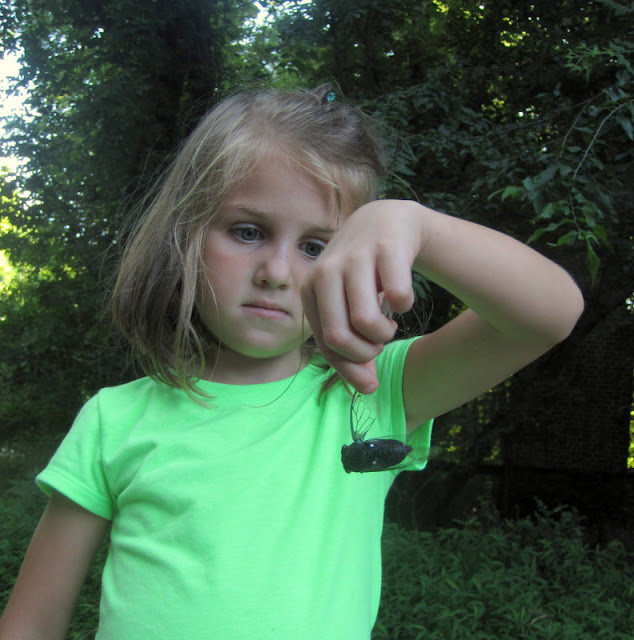 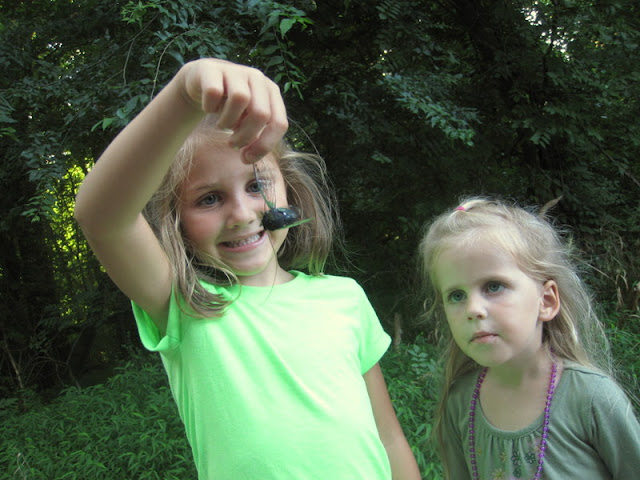 It was a wonderful addition to the cicada shell we found discarded on our crepe myrtle out front. 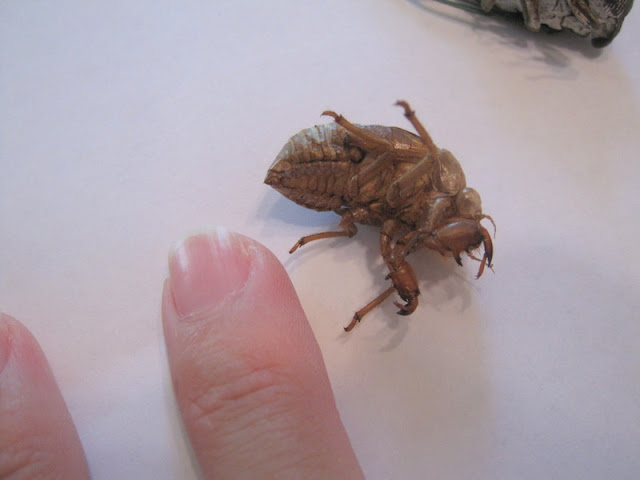 These bugs are crazy! They live underground for 2 to 5 years (since these are annual cicadas—not the crazy 13 or 17 year periodical or "magic" cicadas) before emerging to molt, finishing up their transformation into fully-fledged adult cicadas.

You can see the hole where the cicada just ripped out of its old skin. I think it would be both terrifying and amazing to watch. We've only ever found empty shells though: 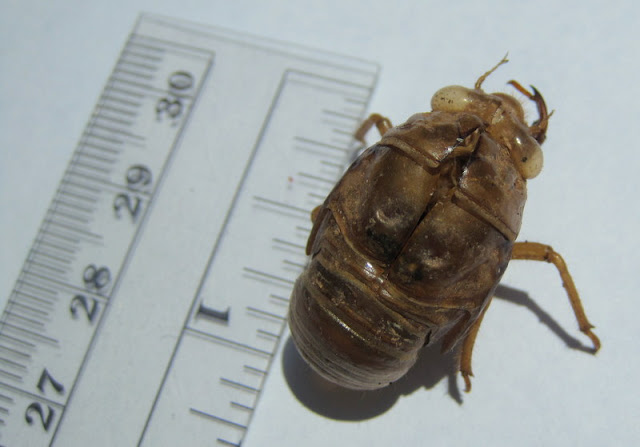 The actual cicadas are much less fierce looking than their adolescent counterparts. For starters, they're a prettier colour. And then there's the fact that they lose their crazy jaw/claw things in favour of a proboscis. 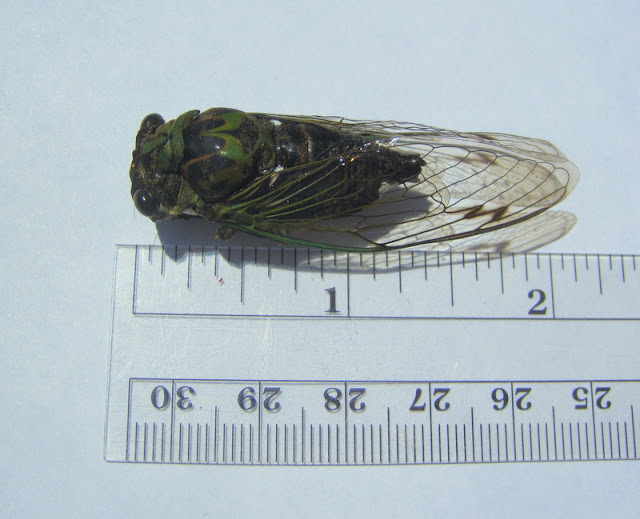 They're big and dumb—they just mate and die and the cycle starts all over again and they have terrible aim and are always flying into things, which can be terrifying because they're huge and loud. Obnoxiously loud. 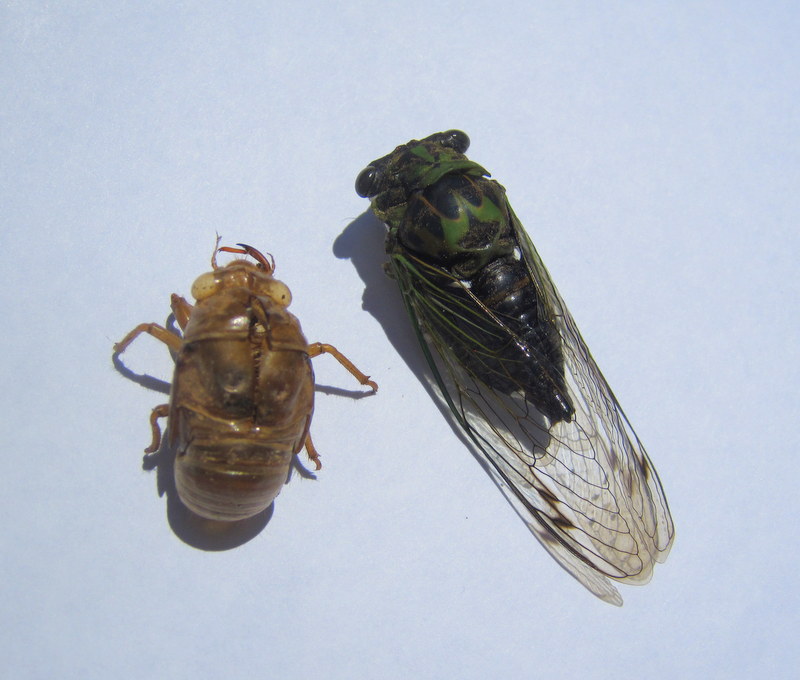 We have some woods behind our house and they're so loud back there, all night long! I could hardly sleep last night. Our room was one whirring den of cicada madness. The front half of our house, where our children sleep, seems almost eerily quiet when I wander over there in the middle of the night. The back half of our house sounds like we live next to some sort of jungle/train station. 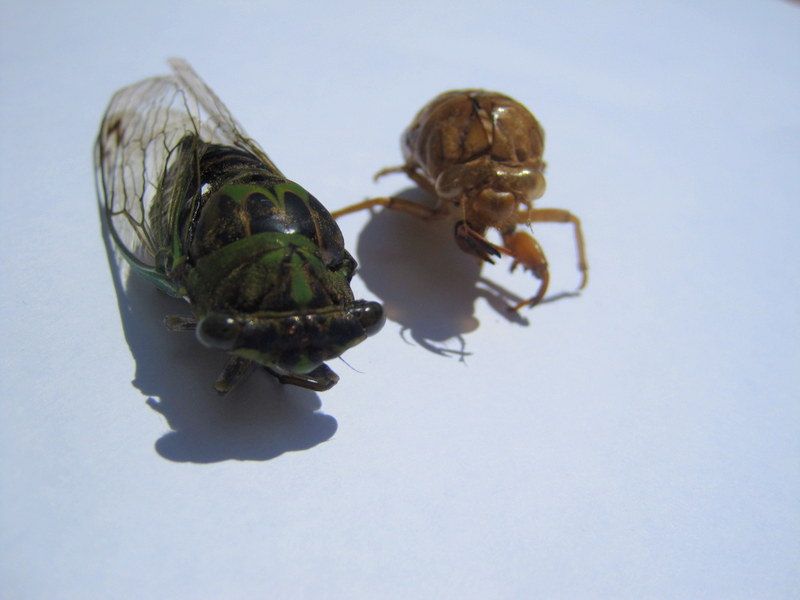 The best part is that because they emerge solely to mate and die they're super attracted to anything that mimics their mating call. So Andrew gets pelted with love-sick cicadas while mowing the lawn.

They're big. And dumb. And fascinating.

(Sorry for anyone who doesn't like pictures of bugs. My sister asked for them. Also, Rosie, our wolf spider, she died. So you won't see any more pictures of her (you're welcome, Crystal).)

We came home hot, sweaty, and exhausted. We sure do appreciate our pioneer ancestors who taught us so much about perseverance and faith (and also about the importance of keeping a journal).
Posted by Nancy at 11:05 PM