Fall is here, hear the yell, back to school, ring the bell

The first day of school is here at last (and all too soon). The kids all got up and ready to go like professional students this morning. They were all quite excited (and a little bit nervous). We took pictures before they left for school and the girls were a little thrown off when Benjamin squeezed his way between them, rather than standing to the other side of Miriam. Those two have been standing next to each other for first-day-of-school pictures for several years...and now Benjamin has finally joined them. 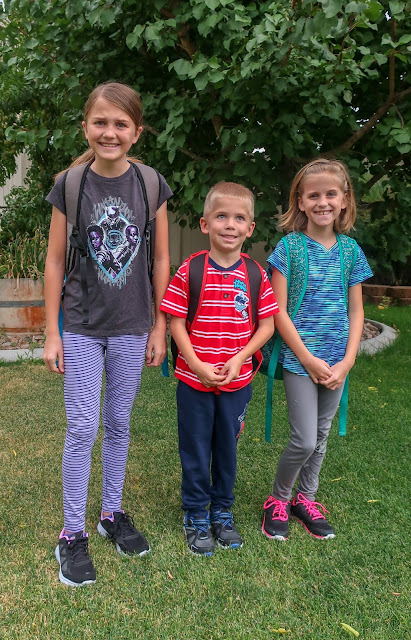 Okay, that picture should totally have been an outtake but, unfortunately for Benjamin, I'm keeping it. This is his first year going to school all day long, starting the same day as his sisters (because here kindergarten is only half day and starts/ends a week later/earlier than the other kids). Here's a better picture of him: 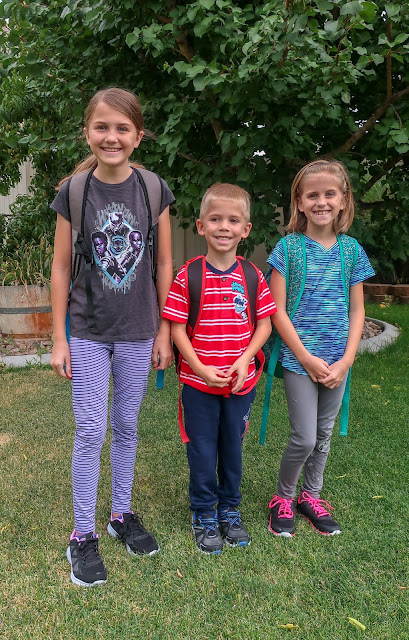 He was so full of emotions that he could hardly handle himself the past few days. He's been extraordinarily goofy, bouncing off the walls, talking loudly, just not thinking. Whenever I'd remind him to cool his jets he'd say, "I CAN'T HELP IT! I'M SO NERVOUS!"

Here are the kids striking an "excited" pose (I don't know what Benjamin is doing): 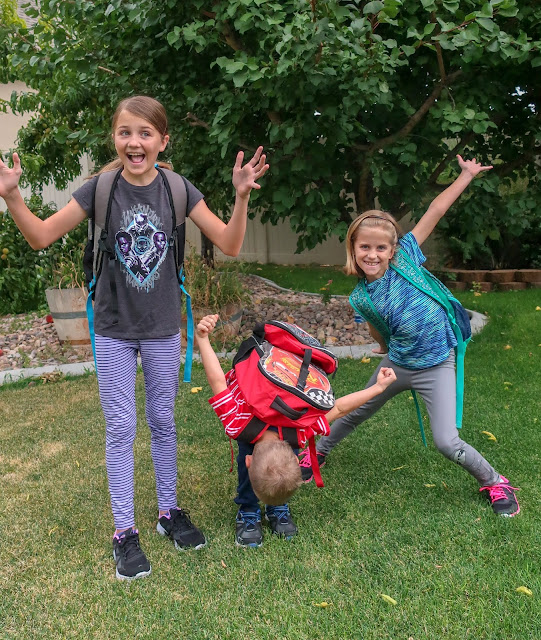 At back-to-school night yesterday he got a little gift from his teacher to "help [him] not be so nervous," she said.

"How did she know I was nervous!?" he asked, impressed.

The tag read, "Do not open until the night before first grade," and inside was a poem called "ready confetti" and, naturally, some confetti. He was supposed to sprinkle it under his pillow to help him feel ready for school in the morning.

"Tackle what?" he interjected.

He climbed up on a nearby bench, leaped dramatically into the air, landed in a heap on the ground and then rolled around with nothing for a few seconds before declaring, "See? It can't be done. Mom, that's so silly. Tackling the day. Ha! Good one."

I'm always the crazy one.

Miriam felt pretty good about starting grade four. Her teacher's classroom is Star Wars themed, which Rachel and Benjamin were both rather jealous about, and their desks are all turned around backwards so they can't keep anything inside. Instead they keep their supplies in their cubbies or on top of their desks. Her teacher has a blood clotting disorder (not hemophilia but something in that vein (see what I did there?)) and, in the past, has slipped on junk that has fallen out of students' desks so she's eliminated that issue. Miriam pointed out that stuff could also fall off the top of their desks but I suppose there's a little more motivation to keep the top of your desk tidy (not that you can tell that from my desk). At any rate, her teacher will always know when someone's desk is getting out of hand and can have them tidy it.

Rachel's teacher taught grade five last year, but now she's teaching grade six. I think we're rather lucky to have gotten her because I was secretly hoping that Rachel would get her last year (though we absolutely loved Rachel's grade five teacher as well). Her teacher is the wife of a linguistics professor at BYU who plays in the gamelan. She was quite impressed by Rachel last year when she knew what gamelan was. She's working on her master's degree currently and seemed almost ready to ask Andrew for help with statistics after he told her what he was teaching this semester at BYU. She was very sympathetic to our job-finding journey (she told us that once, while he was an adjunct professor, her husband got a call the week before the semester started, informing him that they were dropping one of his classes, essentially cutting their pay in half for that semester, which was awful).

Anyway, Rachel is set up to have a great year, I'm sure. She's certain she can juggle a billion extracurricular activities (orchestra, choir, soccer, basketball, the school musical) and has even been throwing around the idea of trying out for student council. She's going to be busy!

Alexander, Zoë and I accompanied the kids to school this morning because Benjamin was still rather nervous about his first day. I didn't take any pictures of them (sorry), but I should note that Zoë told me that when she grows up she wants to be a mom. Benjamin quickly told her "that's not a job" and that "Dad is our dad but he's also a professor at BYU" and that "nobody knows what Mom does."

So that was neat.

At first my heart was melted into a little puddle of goo by Zoë's remarks, but then I ended up feeling a little vindictive about Benjamin's remarks. Inside I was like, "Maybe I'll just stop doing whatever it is Mom does and then you'll find out everything I do, kid!" But I chose not to respond because sometimes no response is the best response (let it go, let it go...). Besides, I kind of like the idea of being a woman of mystery.

Anyway, we walked the kids to school and the whole way were hearing cheers erupting, which made the kids feel rather curious. Once at the school, we found the teachers lining the walkway to the front doors, cheering every group of students that entered. It was a rather fun start to the day!

The girls left me at the front door and then I helped Benjamin get settled in his classroom. And then I realized that I hadn't ever had the children coordinate a meeting place for after school, so I told Benjamin where to meet his sisters and then had to go find his sisters to tell them where to meet Benjamin. They came home together so I guess it worked out well.

They all said they had the best first day and that their teachers were the nicest. And there was a little excitement as well! A student had a medical emergency (which honestly isn't wonderful for that student) and when the ambulance arrived they said there was no way they could get to the hospital on time (so extra not wonderful for that student) so a life flight helicopter was called in and it landed on the school field, which isn't exactly something you get to watch every day. Rachel said they could see it right outside their classroom windows. The other kids didn't see it, but they got to hear all the commotion. (I'm told the student will be fine, in case you're wondering).

Here on the home front we had the quietest day we've had in months. We had some breakfast, put in some laundry, read some stories, and then Alexander started acting like he wanted to take a nap so I was like, "Yes, let's!"

He's been sleeping in 30-minute microbursts the entire weekend and it has literally been torture. I get that he's sick (I'm sick now, too (thanks to you, baby)) but, like, stop screaming and sleep already!!

Anyway, when he went down for his nap I turned on Netflix for Zoë, handed her the remote, and then crawled into bed without setting an alarm. We ended up sleeping for a full 2.5 hours (and it felt so good!). Granted, Alexander did wake up in the middle of that to nurse (he has a sore throat, trust me) but he fell right back asleep (and so did I). It was so glorious. Zoë thought it was great, too! She got to watch a ton of television and she didn't have to bargain with her siblings over which show to watch.

Alexander and I are both feeling much better after getting such a decent block of sleep under our belts.

Zoë also eventually finished doing her morning chore of emptying the dishwasher. It's really not a difficult thing to do (she only has to do plastic dishes and utensils because I put away all the glassware and sharp items and heavy items and up high items) but she likes to make it drag on all day long. I left her working on the dishes while I got another load of laundry from upstairs and as I came downstairs it sounded, quite clearly, like she was goofing off with her brother instead of doing her job, so I said, "You’re doing the dishes, right?"

"Nope," she said matter-of-factly, "I'm not. I'm being attackled* by your baby, so I can't do the dishes right now."

Clearly this was my fault since it was my baby attackling her, never mind the fact that he's pretty darn easy to get away from at this age, though, to be fair, he can get out of his living room "playpen" on his own now. We've been boxing him in there ever since he learned how to crawl. The couches make an L-shape in the opposite corner of the walls, so all we have to do is put the baby walker in one entrance and the footstool in the other and he's effectively trapped.

I always thought he'd figure out that he could just crawl underneath the walker, but instead he figured out how to push the footstool out of his way.

Oh, also he can crawl up the stairs, which was a fun thing to figure out today. I'd left him downstairs while I'd run upstairs for something and when I came back to the stairs, there he was, making his way up!

We visited with my friend Shallee the other day and I mentioned that Alexander has been a terrible sleeper lately (though I hadn't known then that he could be a worse sleeper) and she said that she found with one of her kids that she'd have what she called a "week of hell" and then suddenly her child would bust out a new skill and go back to their regular schedule. It's like their lack of ability to stay asleep corresponds with their brain creating new synapses or something (I'm not a neuroscientist so I could be way off) and once that happens they can settle down again.

Well, he climbed up our long, steep staircase a handful of times (which has to be exhausting for a little buddy) and figured out how to push the footstool and was joyfully getting into kitchen cupboards all day, which are three new-to-him activities, so hopefully we have earned some respite from our "week of hell" (which was a whole lot longer than a week).

I'm also hoping that having the older kids on a school schedule will help Alexander get on some sort of schedule himself. Having the kids home all day every day was, perhaps, a little overstimulating for him (I know it was for me). In fact, when I was leaving the school after dropping the kids off this morning a mom with a tear-stained face said to me, "You must have done all your crying earlier!"

But actually, no. I didn't cry.

I love my kids, but I also loved the quiet at our house today and we're all excited for everything we'll be learning this year, so three cheers for the start of the school year!

* I'm not sure if this is supposed to be attacked, tackled, or tickled, or some mixture of the three, but I love it so I'm keeping it forever.
** It was a white lie.
Posted by Nancy at 12:41 AM