Short story long, Zoë is a habitual beverage scavenger. She doesn't really care whose cup of water is on the counter, she will drink it (and then if she's still thirsty she'll reach for the next cup).

On this particular day, I'd told her several times to get out a new cup and I'd get a drink for her since the only cups on the counter were (1) full of vinegar, (2) a sippy cup Riley had used and which had been in the car for several days, (3) Benjamin's cup. She absolutely insisted on drinking from the cups already on the counter, so I pulled out the camera.


Cup #1 was full of vinegar because on Monday evening we'd done an impromptu service project with some neighbours and cleared the overgrown trail behind our house of brush. We came back home blistered, bruised, hot, stinky, and full of friendly things like thistle thorns. We also must have brought a few bugs back with us because late that night we found a green stink bug in the kitchen. Andrew was just about to whack it when I said, "No, stop! That's a stink bug!"

If you haven't noticed this about me, I enjoy identifying critters. I have friends (and sisters—most recently Josie!) send me pictures of bugs, asking me to tell them what creepy crawly is plaguing them. I no entomologist, but am somewhat of a bug enthusiast (though I remain the right to be squeamish of any bug I so desire and to ask my husband to squish spiders for me).

We didn't want the stink bug to release its stink bomb so we researched ways to get rid of it without first frightening it. Wikihow suggested spraying it with hairspray to "immobilize" it (but it flew off so this didn't work) and then we were going to knock it into a cup of vinegar.

Thus the cup of vinegar.

The dishwasher was already running so I left the cup of vinegar on the counter and forgot about it until Zoë was reaching for it (and, like I mentioned, I did try to convince her to allow me to get her a fresh cup of water (but no one listens to Momma)).

Why Benjamin decided to come taste the "spicy water" is beyond me. He's just a curious kid, I guess.

I was too busy laughing to stop him.

He's a good kid, you know. He was so excited about clearing the trail that he prayed thanking Heavenly Father that we could "do that hard work!" It was one-third of a mile of jungle but it was worth it and it was fun that so many people came out to help on such short notice (we had three other families and a couple individuals join us, making a party of 17, I believe). The trail is much more pleasant now that we're not picking our way around 6-foot tall thistle plants!

Seriously, these thistle plants were huge. Here they are back in June (from a walk we took on the 11th), back when things were still lush and green (because, of course, our big girls weren't there with us on Monday since they were off living it up in Las Vegas with Grandma and Grandpa): 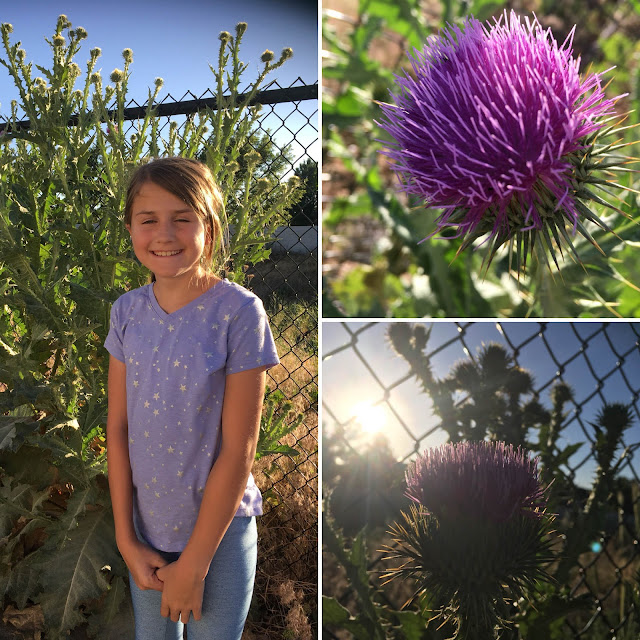 We're kind of in the middle of a somewhat severe drought right now though, so nearly everything is now brown and brittle.


The thistle plants dried up into tall, prickly skeletons of their former selves, which then keeled over in the wind and were lying all over the path. We chopped down everything along the 0.3 mile path and now it is much more accessible to strollers and things like that.

While we were working we came across many bugs, as you might imagine. Uncovering a wasp nest was never very fun, but the kids did enjoy all the praying mantises (for the most part). Benjamin bravely picked up this little guy who'd hitched a ride on our stroller, who then proceeded to intimidate Benjamin by making striking movements with its forelegs: 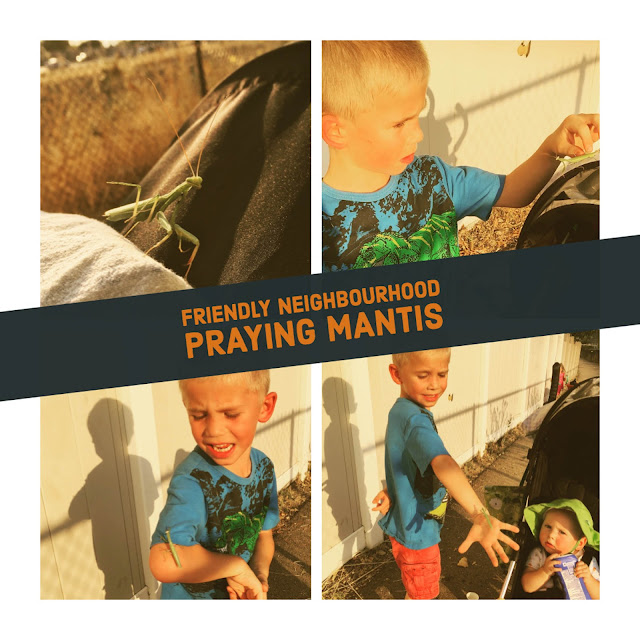 I don't really know how to tie up all the loose ends I've left here...except to say that that's why there was a cup of vinegar sitting on the counter.